This meeting was held on January 21, 1954. The decision to hold such a meeting was reached, jointly, by the consistories of the Protestant Reformed Churches of Doon, Edgerton, Hull, and Redlands. They resolved to call a special classical session, at which the faithful remnants of Classis West would be represented. Although a public announcement of this proposed session of Classis West appeared in ourStandard Bearer, a special invitation was sent to these consistories concerning whom it was not known whether they had taken a definite stand.

Dear Editor of the Standard Bearer:  IT IS WELL!

Getting Personal A certain brother wrote to me last week calling my attention to an article appearing in the Reader’s Digest (February, 1954, page 63) which he thought pretty well describes what is going on lately with those who are in the consistory of the Rev. De Wolf. After reading the article, I agree with him.

The tenth article of our Church. Order reads as follows: “A minister once lawfully called, may not leave the congregation with which he is connected, to accept a call elsewhere, without the consent of the consistory, together with the deacons, and knowledge on the part of the classis; likewise no other church may receive him until he has presented a proper certificate of dismissal from the church and the classis where he served.”

Article 6. That some receive the gift of faith from God, and others do not receive it proceeds from God’s eternal decree, “For known unto God are all his works from the beginning of the world,” Acts 15:18. “Who worketh all things after the counsel of his will,”Eph. 1:11.

In our previous article we were discussing the grounds which Tertullian advanced in support of his opposition to the baptism of infants. And we concluded the article by calling attention to the second ground for his rejection of this practice, namely that an innocent child needed no cleansing from sin. A third ground advanced by Tertullian concerns the consequent responsibility to the sponsors. “For,” we hear him say, “why is it necessary—if (baptism itself) is not so necessary—that the sponsors likewise should be thrust into danger?

“The pedagogical approach.”  It also is an insult to God!  An insult it must be, for it was invented and is set forth to defend the God-insulting conditional theology that speaks of prerequisites which man must fulfill before God will bestow salvation upon him.

This .beautiful, passage of Scripture calls .attention to the living hope that is ours through the resurrection of Jesus Christ. More particularly it admonishes us concretely to live in this hope as this is manifested in a walk of conversion, the putting off of the old man and the putting on of the new man. The central manifestation of such a walk of hope and conversion is in the fervency of the brotherly love that we have for one another. In this fervency of love we see love perfected. Sanctification will thus be finished and completed in the fear of God.

Chapter 1: The Meaning of the Sixth Commandment  The person of my neighbor is the other man in my life. It is the man that has the same talents and powers and gifts as I have, and whose talents and gifts limit mine, and therefore limit my person. He is the man that stands next to me. He occupies the same position as I do in shop or office, in school or church, in state or society, and whose position in life therefore limits my position. 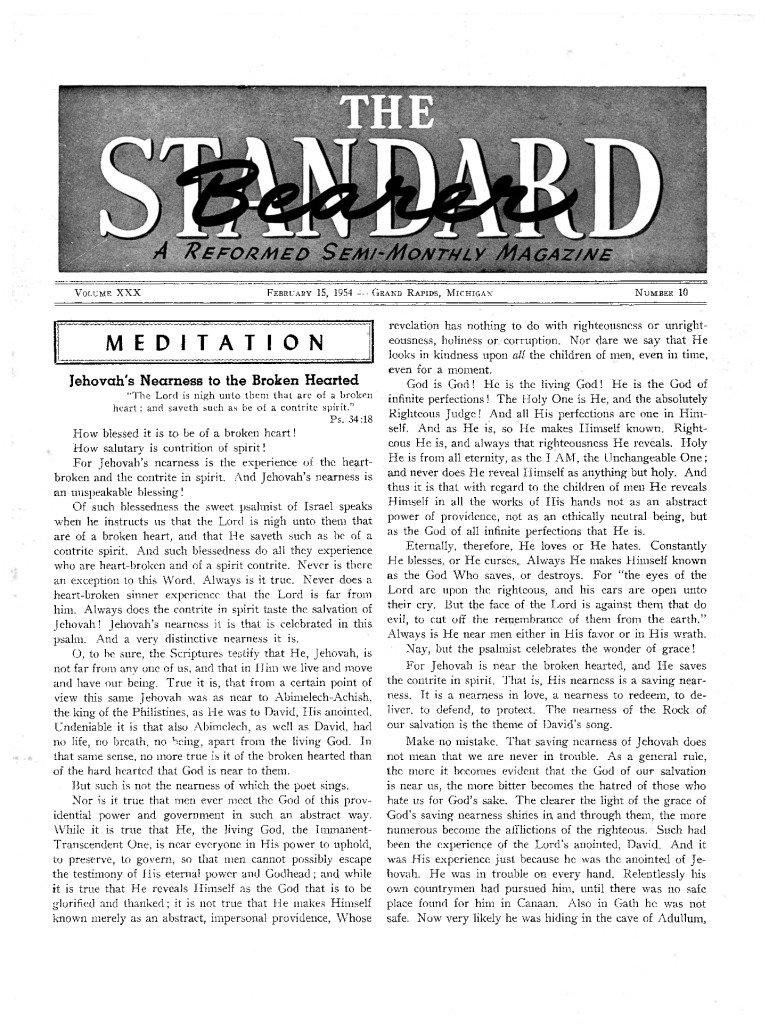