Report of Classis East Convened, Jan. 5, at Grand Rapids, Mich. Classis East met in the auditorium of the Second Protestant Reformed Church of Grand Rapids, Mich., January 5, 1949. The Chairman of the previous meeting Rev. S. Van den Berg, called the meeting to order and conducted the opening exercises. After the singing of Psalter No. 239 he reads I Cor. 4 and leads in prayer.

Synodical Decisions. . . . The General Synod of the Reformed Churches of the Netherlands (Art. 31) was held recently in Amersfort. Of special interest to us are the decisions taken in response to our own Synodical suggestion of possible closer contact and relations. From an early report in De Reformatie we translate the following:

Last time we gave you the principles drawn by the Rev. Gritters whereby this subject ought to be taught in the Christian School. The definition that Rev. Gritters gave of Geography is, “Geography is a study of the earth, its disposition and its fulness as it belongs to God the Lord (Psalm 24:1) but as it has been given to the children of men. (Psalm 115:16). That is the language of faith pointing out to texts in God’s Word where He reveals to us the significance of the study of geography.

Leaving David’s presence, Abner went forth to gather all Israel unto his new lord as he had vowed. He was gone but a little while perhaps when the servants of David and Joab came “from a troop”. They had been warring against some enemy of Judah and brought in a great spoil with them. David was still dependent on such raids for his livelihood. For no arrangements with the people had yet been made for the support of himself, his household and his army.

The Attributes of God (Incommunicable)

Just after I wrote the above article the mailman brought me the copy of the Gereformeerd Kerkblad voor Overijsel en Gelderland in which the first installment of the advice to immigrants by the Rev. J. van Raalte appeared. That first article, however, was extremely disappointing, since we surely expected that in it the Rev. van Raalte would at least have mentioned our churches. But there is not a word about them in it.

In the Gereformeerd Kerkblad Voor Overijsel en Gelderland the Rev. J. Van Raalte from Neede writes a word of advice to immigrants from the Netherlands to America and to Canada especially in two articles, of which only the second one reached me. I am very sorry that the copy of said paper in which he wrote the first of those articles was not received by me, because I have reason to surmise that especially the first article would have been of interest for us as Prot. Ref. Churches. However, also in this second article, although the Rev.

“Under the heading of formal catecheties I treated the methods and means of teaching catechism. Here attention must be called first of all to the division into classes. In the nature of the case this division must first and chiefly figure with the different ages of the catechumens. These ages are readily divided into three, namely: the age of children from six to twelve years; the age of early adolescence, from thirteen to sixteen; and the age of later adolescence or of young people of sixteen years and older.

“And let him that is athirst come: and whosoever will, let him take the water of life freely.” Rev. 22:17 “As the heart panteth after the water brooks, so panteth my soul after Thee, O God!” 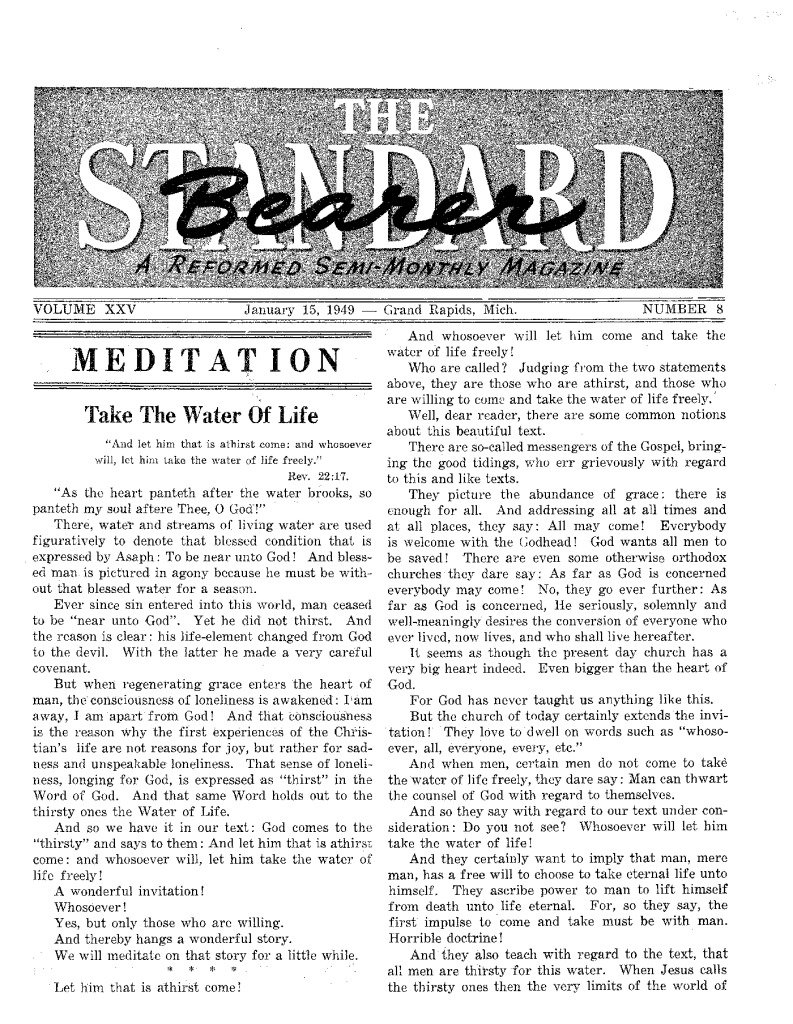