REPORT OF CLASSIS EAST April 8, 1948 The delegates of the twelve churches of Classis East met at the Protestant Reformed Church of Holland, Michigan at the above mentioned date. The opening devotionals were conducted by Rev. B. Kok, who later served as clerk, while Rev. J. A. Heys served as chairman.

There are two words that spell the depth of despair, the complete disillusionment of the sinner shackled in the bondage of sin and death. They are the two words, “In Vain”. It is the verdict of the righteous Judge of heaven and earth upon those who set their hearts and affections upon the things of this earth. In large, bold letters Gods writes over a world of wickedness, as it exists under His curse: In vain, vanity. It ends in eternal desolation of hell. Vanity is Deceptive Emptiness.

Are you asleep? What a foolish question. If you were asleep you could not read these lines, and the above question would never reach you.

As pursued by Saul, David, it was seen, had fled southward to the wilderness of Moan. Catching up with him, the king nearly had succeeded in surrounding and seizing the fugitive, when he received information of a new Philistine invasion, tie had to desist from further pursuit; and David was saved. So had the Lord again delivered his servant. Going up from thence, David dwelt in the stronghold of Engendi, a mountainous region with many caves on the border of the wilderness of Judah about the middle of the ‘ West shore of the Dead Sea.

In an editorial of the April 15 number of our Standard Bearer, the Reverend G. Vos deplores the action of Classis East because the Classis did not accompany her rejection of Creston’s proposals with a single ground. To deny this fact as such is, of course, not the intention of the undersigned. However, we would call the attention of our readers to the following observations.

* Paper delivered at the Ministers’ Conference held April 9, at the First Church. INTRODUCTION

The William B. Eerdmans Publishing Company is to be congratulated on the mighty endeavor which they have undertaken, namely, to reprint the commentaries of John Calvin. As far as is known to me, the last publication of his commentaries is almost one hundred years old, and it was more than time that a new publication appeared. This work entails a considerable outlay of money, and standing correction, I seem to recollect that it will mean the expense of a quarter of a million dollars. A mighty venture indeed. 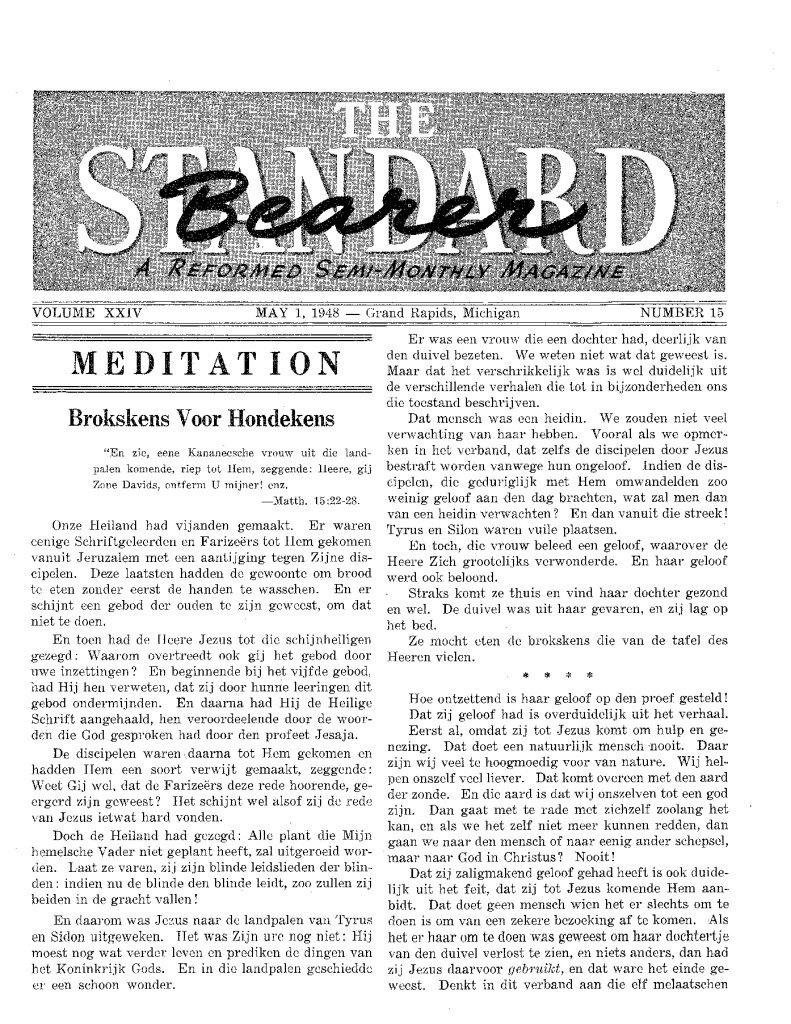