“Thus saith the Lord, Stand ye in the ways, and see, and ask for the old paths, where is the good way, and walk therein, and ye shall find rest for your souls. But they said, We will not walk therein.” Jeremiah 6:16

By the Spirit of wisdom, I ask that you use the able minds God has given you and think with me for a mo­ment. Just think. Think about the philosophy of this world that says, “Newer is always better.” Think about the rash acceptance of everything new. Thronging the malls, the Internet sites, and even the churches are con­sumers of our society, craving the new. All are enam­ored by the shiniest, the freshest, the latest—that hottest fad on the market. Whether it be material things like new devices, apps, games, fashions, songs, books, diets, and exercises or whether it be less material things like new ideas, philosophies, perspectives, and hip worship styles, everyone seems crazy (truly irrational in their ac­ceptance) about the new.

Do you feel yourself being swept along by that mighty current, attracted to these same new things? Stop your­self, and think! Remember to value the old. Newer is not necessarily better; in fact, the new may be extremely dangerous and even downright evil.

What many believe rashly is simply false. It is com­mon sense that newer is not necessarily better. The shiny new car may have a manufacturer defect, thus making your second-hand car more dependable. The updated device may break within a few weeks, proving that it is not actually better. The latest fashion may expose the body to seduce—obviously not better than more modest clothing. The new stories told for enter­tainment may be fun but full of lies, far inferior to the old truths of His-story. The new teachings by a pastor may be fresh but full of heresy, revealing the strength of sound biblical preaching by an older man that many might find dull.

The pursuit of the new is replacing the pursuit of ho­liness! I urge you, young people—resist from following the trend.

Think biblically. In Acts 17:21, Paul criticizes the foolishness of the city of Athens in this way: “For all the Athenians and strangers which were there spent their time in nothing else, but either to tell, or to hear some new thing.” This verse shows us two reasons why it is so difficult to flee from the irrational pursuit of the new. First, it exposes our sinful nature. The Athenian is in all of us. Secondly, pressure from the masses is upon us. Addicted to the new, the world will call us “old-fashioned,” “a dinosaur,” “boring,” or some other derogatory name if we do not join them in seeking the new. When God commanded His people in the days of Jeremiah, “Stand ye in the ways, and see, and ask for the old paths, where is the good way, and walk therein, and ye shall find rest for your souls,” the people refused and said: “We will not walk therein” (Jer. 6:16). This is how the church world has reacted and will react to the old as they foolishly seek only the new.

Can you see the danger in this? Here it is as simply as I can put it. God is old. He is the Ancient of Days (Dan. 7:9). Thus, as the world rushes the church away from the old and toward the new, the church turns away from the old but true God to new but false gods. The fickle masses embrace the new, and their covetous crav­ings lead to more and more apostasy. Young people, I exhort you with Paul: “Therefore, brethren, stand fast, and hold the traditions which ye have been taught, whether by word, or our epistle” (2 Thess. 3:14).

Before I explain the positive, think about a different extreme. There are some, perhaps those of the older generations, who might read the first part of this ar­ticle and conclude erroneously that everything new is evil and that all and any change is departure from the truth. This mindset is false; it is a fear-driven over­reaction against the rash acceptance of the new. The new is not in and of itself evil and change is not al­ways bad. Second Corinthians 5:17 speaks of God making us new creatures. We are to put off the old man and put on the new man. Repenting from your sin and liv­ing a new and godly life is good. No one would deny that the new heavens and the new earth is good. The imperfect church on this earth (yes, that includes any ‘PR’ church) should be Reformed and always reforming, which may include new changes. Of course, there must be thorough study of Scripture, confessions, and church history before such modifications are implemented, but some changes may be good. Thoughtlessly accepting the new is very dangerous, but not all that is new is evil.

With this clarification, however, wisdom would be to stick with the old unless you are sure that Scripture calls for change. God calls us unto the old paths explicitly. This includes the old doctrines most of you have learned and are reviewing through catechism classes and wor­ship services. When you hear the old teachings of God’s sovereignty, creation, predestination, particular grace, the unconditional covenant, justification by faith alone, and many more, there should stir within our hearts a new awe for the old. The old gospel should be good news to us (gospel means good news). Following the old paths also includes walking according to the old com­mandments of God. As everyone does what is right in his own eyes and the church world is plagued by antinomianism, the laws of Christ are despised as old-fashioned. Divorced and remarried couples join the LGBT community to mock God’s law on marriage. Parents join the terrorists to murder their own children. All are tempted to entertain themselves with the breaking of God’s law, becoming more and more desensitized to un­lawfulness. Overwhelmed with grief, we should weep when there is a compromise of God’s old, unchangeable moral code! With renewed vigor our living testimony ought to be, “O how love I thy law!”

There are many old traditions not explicitly stated as law in Scripture but that we should deem wise to con­tinue. Church history provides much evidence of tried and true practices that over time God has used for the benefit of the church. Attendance at multiple worship services on the Sabbath, personal devotions every day, Bible study with one another, use of the King James Version, and Psalm singing with simple accompaniment in worship are a few old traditions that we ought not quickly discard. Let us be very wary of the pressure to contemporize everything.

Let every one of you young people remember this simple concept clearly as the world attempts to sweep you along with them quickly and impulsively to seek the new. It is a ploy to distract and direct away from the Ancient of Days and His old paths. Let the young and the old walk shamelessly on the same, old paths upon which our fathers have tread. 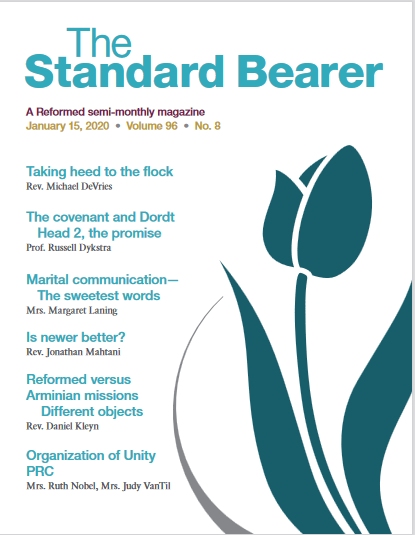