Such is the title of an article appearing in the September 15, 1958 issue of The Presbyterian Guardian, and written by Carl J. Reitsma, minister of the Orthodox Presbyterian Church of West Collingswood, N.J.

“The 1958 General Assembly of the Orthodox Presbyterian Church instructed its Committee on Correspondence with other Churches to undertake conversations leading to closer relations with that denomination of which the First Orthodox Protestant Reformed Church of Grand Rapids is a member. The following brief article by the Rev. Carl J. Reitsma of West Collingswood, is designed to provide information concerning this denomination. Our fellowship with it is of special interest inasmuch as it has taken an interest also in our work, through contributing to the support of our foreign mission endeavor.”

“The recent General Assembly of the Orthodox Presbyterian Church instructed its Committee on Correspondence with other Churches to seek to develop closer relationships with the Protestant Reformed Church identified with the Rev. Hubert De Wolf. The Assembly action takes account of increasing cooperation between the two denominations.

“The Protestant Reformed Church originated in 1924 as a secession from the Christian Reformed Church in protest to the deposition of the Rev. Herman Hoeksema and others from the Christian Reformed ministry. Mr. Hoeksema failed to subscribe to ‘Common Grace’ insisting that the doctrine was Arminian and amounted to an open invitation to ‘worldly- mindedness.’ The denomination rallied to a membership of 6000 distributed in twenty-four congregations throughout the United States. The members were almost all of Holland descent and in some churches one Dutch worship service is still being conducted.

“The extraordinary abilities of Mr. Hoeksema may be seen in that while he was the pastor of the 1200 communicant member congregation in Grand Rapids, Michigan; he simultaneously established and conducted his own theological seminary, denominational magazine, The Standard Bearer, and kept a steady flow of devotional books running through the presses of Eerdmans Publishing Company. As a pulpiteer he held his flock in the grip of his text with sharp exegesis, sound logic and rich personal application. His flashing eyes refused to let the listener go, and his pauses were so perfectly timed that they would eat holes in your soul as you neared the breathless climax of an hour-long, message. He was my pastor for twenty years and I find it hard to criticize so learned a teacher and so warm a friend.

“As the years passed, however, the anti-common-grace thinking drifted more and more into hyper-Calvinism. Divine election became an intellectual hobby with the people, and one heard little else. Piety was regarded as though it were Baptistic. The spiritual life of the church was at a standstill as the church sank deeper and deeper into vain speculations about the counsel of God. Faith, it was emphasized, is themeans for the obtaining of salvation but not the condition of salvation. The church became so afraid of attributing any part of salvation to, man that they even took the challenge out of faith.

“By this time there were some in the church who were awakening to the danger of passive Christianity and insisted that we ‘must- believe’ and that we ‘must obey.’ To bring these into line the Hoeksema element succeeded in getting a ‘Declaration of Principles’ passed by the Synod in 1951 in which ‘unconditional theology’ was fixed as the doctrine of the Protestant Reformed Church.

“Two years later, in 1953, the Protestant Reformed Church was brought a point of decision by the Lord. The large Grand Rapids congregation by this time had three associate pastors, Mr. Hoeksema, the Rev. Cornelius Hanko and Mr. De Wolf. De Wolf in a sermon made two statements for which he and one half of the consistory which supported him were suspended. The statements were, first, God promises to every one of you that, if you believe, you shall be saved,’ and the second, ‘Our act of conversion is a prerequisite to enter into the kingdom of heaven.’ The rift quickly spread through the congregation and then through the denomination, and litigation, which is still in progress, followed for the properties. The denomination was divided in half with seventeen churches, sixteen ministers and a total membership of 3300 siding with De Wolf.

“During the last five years the Protestant Reformed Church associated with Mr. De Wolf has reviewed its doctrines, rejected the ‘Declaration of Principles,’ returned to the simple Gospel, and has re-discovered the challenge of world missions. There is a passion for evangelism in these churches and a strong desire to make up for lost time. The Rev. John Galbraith was introduced to these brethren, spoke at a specially called missionary meeting and was enthusiastically received. It seemed to them that a whole new world of blessed opportunity was opening to them.

“While this was being done by the denomination, the Second Protestant Reformed Church of Grand Rapids volunteered to support the Rev. Donald H. Taws and family in Eritrea to the amount of $250 per month for at least a year. This church has li6 communicant members. The Rev. John Blankespoor is its pastor.

“As our Committee begins its work let us pray that God will bless these deliberations, for we know that cooperation in the work of the Lord rests upon the foundation of scriptural agreement.”

In respect to what Reitsma writes concerning the person and character of the Rev. Hoeksema as a pulpiteer we find most disgusting. His words spread smooth as butter, but are as biting as salt in an open wound, Mind you, Reitsma is speaking of a preacher and pastor who with “sharp exegesis, sound logic and rich personal application” ate holes in his soul for some twenty years with his sound expository preaching, whom Reitsma still considers a “learned teacher” and “so warm a friend,” yet, he is going to criticize him. Must not one be utterly beside himself to contradict a teacher who for twenty years convicted him with sharp exegesis, sound logic, and rich personal application of the truth of God’s Word? Isn’t it most illogical to criticize sound logic and throw it overboard? I see no hope for the man who is convinced with sound logic and then turns away from it. Or, does Mr. Reitsma mean to tell us that the Rev. Hoeksema has now changed and departed from that sharp exegesis, sound logic, and rich personal application with which he so effectively preached to Mr. Reitsma for twenty years? The rest of his article leads to the conclusion that his answer to the last question is affirmative. He ought to know better, of course. Doesn’t Mr. Reitsma know that when he so writes about Rev. Hoeksema that he at the same time reflects on the sound judgment of others who look at Hoeksema quite differently, men like Mr. William Eerdmans, for example, who publishes Hoeksema’s books? If Mr. Eerdmans reads these comments, and I’m quite sure he does, he will sit back in his office chair and laugh, saying, “Who is that peanut over there in West Collingswood who claims he was a student of Hoeksema for twenty years and is now going to criticize his doctrine and teachings as having changed?” Surely, on the basis of Mr. Reitsma’s commentary on Hoeksema, Mr. Eerdmans must be beside himself to now prepare for publication Hoeksema’s Dogmatics, the very Dogmatics he taught Reitsma while he attended the seminary of the Protestant Reformed Churches. Nobody in his right mind believes that Hoeksema has changed in his sharp exegesis, sound logic, and rich personal application. Indeed, what Reitsma writes about Hoeksema is most disgusting, and a very evil thing.

And it is also very difficult for us to be gracious in reply to Reitsma’s vicious attack on those who still love Hoeksema’s sharp exegesis, sound logic, and rich personal application of the Word of God. It is the more difficult because we know that Rev. Reitsma, who was practically born and raised under our doctrine, knows he has told nothing but a blatant falsehood when he so described us in his article.

Notice the accusations he raises against us. We are hyper-Calvinists. We make divine election an intellectual hobby. We are really impious. Our spiritual life is at a standstill. We vainly speculate about the counsel of God. We have a passive Christianity.

We deny that any of these accusations are true. Rev. Reitsma cannot prove any of them to be true, and I challenge him to do so. What is true is that these accusations are the salve wherewith he smoothes his troubled conscience for having left our churches where he claims for some twenty years the preaching and instruction he received ate holes in his soul.

What is true is that we adopted “The Declaration of Principles,” that we do not believe that faith is a condition to salvation. It is true that we have learned to become suspicious of those who always insist on “must believe” and “must obey.” This latter is especially true when they at the same time subscribe to the two statements of De Wolf, “God promises to everyone of you that, if you believe, you shall be saved,” and “Our act of conversion is a prerequisite to enter the kingdom of heaven.”

But does that make us to be hyper-Calvinists, given to a passive Christianity? Does that cause us to have no respect for piety, and bring our spiritual life to a standstill? Reitsma knows better. We say once more, it is difficult indeed to give a gracious reply to one who writes as Reitsma does in the Presbyterian Guardianabout our churches. And I would warn the editorial staff of the Guardian that before they publish anymore lies about us they had better ask for a conference with us to really find out what we believe and teach.

What Reitsma writes about the group which subscribes to the heresy of De Wolf is quite true hit is true that as soon as they left us they repudiated “The Declaration of Principles.” It is true that as soon as they left us they suddenly became filled with a passion for evangelism and missions, and as Reitsma says, had “a strong desire to make up for lost time.” It is also true that they immediately set in motion the machinery that would bring them back into the Christian Reformed Church and strike up association with the Orthodox Presbyterian Church. Then it was that they were caught up in the ecumenical movement of our time that attempts unity regardless of doctrinal distinction. Oh, yes, as soon as they left us they began throwing overboard the doctrinal position they defended among us for some thirty years as ministers and missionaries. They rejected the doctrines which clearly assert that salvation is of the Lord from beginning to end and there is no work of man in it whatsoever. But let no one think that these people remained distinctly Protestant Reformed when they so acted. The very name “Orthodox Protestant Reformed Church” is a misnomer. They are neither Orthodox, nor Protestant Reformed. 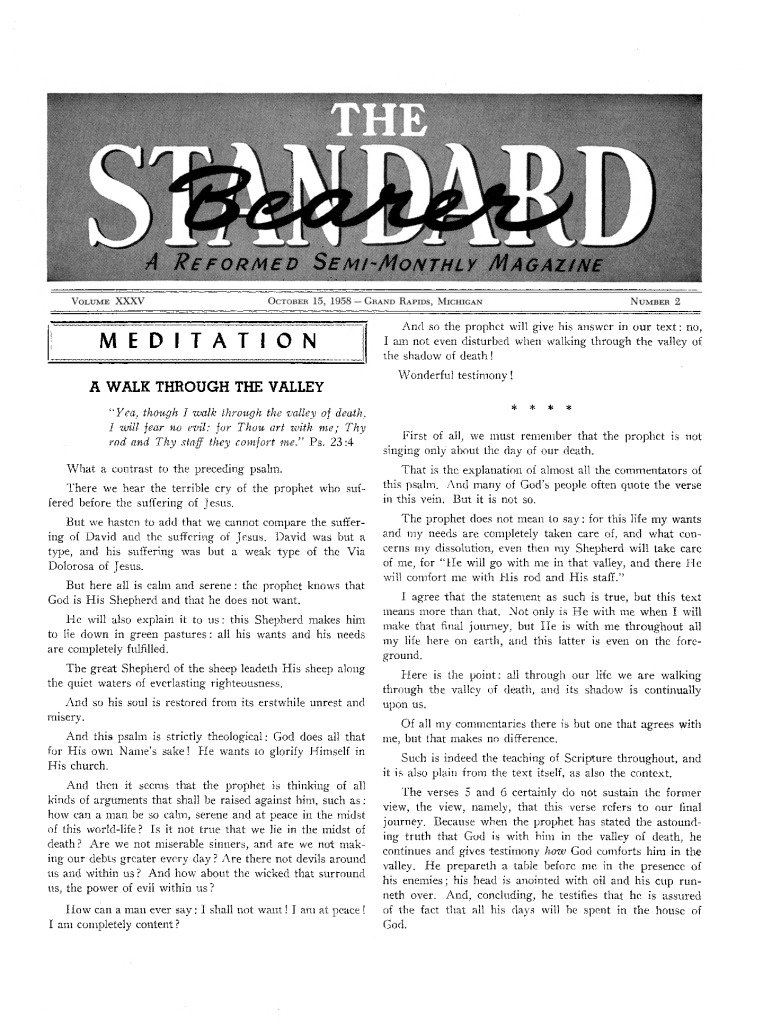