Into Africa… Again (regarding Divorce and Remarriage)

In the September 15 issue of the Standard Bearer, the editorial that reported on the visit to Namibia of the PRC’s Committee for Contact occasioned a handful of letters wondering about and commenting on what the delegation said to the saints about the PRC’s position on divorce and remarriage. The paragraph of interest said:

Then we explained further the PRCA’s view on remarriage of divorced persons. Further, because some had heard us in 2010, and some had read PRCA literature. But others heard for the first time, listening with great interest to our exposition of Matthew 19 and related passages. By those who participated in the discussion widespread agreement was expressed. What difficulty any had was not with the exegesis or theology of the position, much less with seeing the practical importance of maintaining marriages in a day of rampant divorce and remarriage. Rather, they wondered how to treat the few members in their congregations who had already remarried. We related the PRCA history on the issue—that those who were already remarried were allowed to remain, but no others were permitted to join, nor were present members allowed to remarry while their spouse was living. We pray these explanations will be helpful for the new gathering of churches to come to one mind on the vitally important doctrine of marriage.

1. Did the delegation from the Contact Committee teach that persons who have been divorced and are now remarried may be members of the church in good standing if their remarriage took place prior to knowing the biblical truth of marriage?

2. Did the delegation advise the Namibian Christians that this (see question #1) is the official position of the PRC?

3. If so (see questions #1, 2), where can this position be found in the official decisions of the PRC?

4. The delegation should not have aired the PRC’s “dirty laundry,” that is, that the leadership of the PRC in the past allowed divorced and remarried members to come to the Lord’s table. The SB readership is owed a further explanation.

5. What was the historical context of this PRC history dealing with remarried members? Was it the mission field or in an established congregation?

7. Did the consistories, in this PRC history, work diligently to bring these remarried persons to see the sin of their remarriage?

8. Do you think that the PRC position on divorce and remarriage is too strict?

These questions and comments give good opportunity to write a further explanation.

First, as the editorial reported, the delegation explained to the Namibian Christians the PRC’s official position about marriage, divorce, and remarriage. The Contact Committee initiated the subject in 2010; the committee was determined that divorce and remarriage would be included in the topics discussed. In 2016, the delegation repeated the instruction about marriage, this time at the request of the Namibian Christians. The editorial of September 15 made that clear. What the editorial did not think to say, since we assumed it to be understood, is exactly what the PRC’s position is that was explained, thoroughly. Now that questions about our instruction have arisen, we will spell out here what was taught: 1) The only ground for divorce is adultery. 2) Divorce does not break the bond of marriage, for only God can break the bond through the death of one of the spouses. This teaching is grounded in part in the PRC’s strong conviction about God’s unconditional covenant. 3) In all cases of divorce, remarriage is forbidden while the first spouse is living. Remarriage in this case is continued adultery. No such remarried person is allowed to be a member of the PRC. 4) Those who divorce and remarry before they come to know the PRC’s position on the matter are not exempted from this prohibition.

Second, not only did the delegation make the PRC’s position unmistakably clear, but at the end of the day it was a matter of great joy (and not a little surprise) that no argument was raised, but only agreement. Of course, it must be remembered that this was not an official ecclesiastical assembly, but a conference designed for the Namibian churches to come to know the PRC. Nevertheless, agreement, even at that level, is reason to be encouraged.

It is important that that reality sink in for a moment: a little, newly-forming group of five churches from historic Reformed roots, recently departed from a large and apostatizing denomination, seeks to know the view of the PRC on marriage. The Contact Committee knew this had to be one of the topics of discussion in 2010. The Namibians asked for the explanation to be repeated in 2016. The second delegation explained it again. The believers listened. They agreed with the explanation. This aspect of the Word of God, which most had not considered before, now becomes clear to them. The Holy Spirit is convicting them of truth by the Word of God the delegations have brought to them.

At the end of the meeting, a question was put to the delegation: How should we handle the difficult matter of those few members of our churches who are presently divorced and remarried?

(Some of those who wrote letters of concern were clear with what their answer would have been: The elders must be instructed to call these members to divorce their present spouse, and if they do not, they are living impenitently and must be declared outside the kingdom of heaven.)

I can report that, at that point in the meeting, the delegation briefly recounted what our fathers did in the 1940s and into the 1950s when they faced a similar difficulty. The recounting was much briefer than this paragraph will be. In at least two congregations of the PRC, and likely more, there were members who were divorced and remarried. These members were divorced and remarried with the express approval of the ministers and elders in the churches. This was the PRC view—remarriage was permitted to the innocent party when a divorce took place on account of the adultery of one spouse. This was the view of the PRC before Herman Hoeksema began to rethink the historic Reformed position. And when Hoeksema became convinced of the position that the PRC now has embraced, his consistory and others in the denomination needed to become convinced. “Again and again” Hoeksema said in 1943, his consistory did not agree with him, “as often as a concrete case comes up in our congregation today.” Since we will not conclude that Hoeksema was exaggerating, there may have been more than a few cases of remarried persons in the congregation he served. In the same era, in another of our churches, a young man asked his minister if he might remarry after his legitimate divorce. After consulting with Hoeksema and getting his agreement, the minister gave permission to the young man and performed the marriage. The couple were members in good standing in the PRC. This was in the 1940s and early 1950s.

As far as we know today, unless someone can present evidence to the contrary, the consistories did not, after the change in thinking regarding remarriage after divorce, send committees to these couples to call them to repent. They were not placed under discipline or set outside the denomination.

Nor did any broader assembly face the question. No synodical declaration had been made: “We approve the remarriage of the innocent party.” Neither was a decision taken: “We declare it to be sin that the innocent party in a legitimate divorce would marry another.” Rather, from 1924 the practice of the PRC was the standard Reformed practice since John Calvin. And the “position” of the PRC was a “teaching position.” That is, although no broader assembly made any declaration on the matter, the ministers taught what Reformed churches commonly taught. This was the PRC “view.” Then, when Hoeksema became convinced of the PRC’s present position, he began writing about it. Gradually, not overnight, the “teaching position” of the PRC changed. And during the transition, the officebearers did not discipline those to whom they had given permission to marry after a divorce.

This is the PRC history that the delegation was referring to when the Namibians asked. The details, as given above, were not given to them.

That someone would consider this history to be PRC “dirty laundry” (see Q#4, above) that ought not be aired for neighbors to see is a mistake. Rather, this history illustrates how a church reforms. Change does not take place overnight. Nor is real, genuine change accomplished simply by decree. It comes by instruction.

It is understandable, although it is mistaken, that some might judge the recounting of this history to the Namibian churches to have been an official recommendation of that position for them. That is to misjudge the event and the reporting of it. The recounting of the history was a small part of the discussion at the end of an intense and intensely profitable time of discussing and teaching the biblical truth about marriage. The delegation merely made them aware that our churches faced the same question.

What might not be a mistake on the part of the letter writers, though, is their complaint that the report of the visit could leave the wrong impression. The fact that a number of readers wrote of their concerns indicates the possibility of misunderstanding, even by charitable readers. By way of clarification, therefore, let me assure our readers that the delegation did not recommend that the action the PRC took in its history should be the action the GKNA takes in theirs. But the last sentence of the paragraph in question could be misunderstood in that way: “We pray these explanations will be helpful for the new gathering of churches to come to one mind on the vitally important doctrine of marriage.” But “these explanations” refers not primarily to the PRC’s history, but to the exegesis of Scripture and the doctrinal explanations the delegation gave.

To conclude, a few things should be said about the work of Contact Committee who sent this delegation, and to whom the delegation reported when they returned.

When the CC makes initial contact with a church or churches that seek out the PRC, the CC makes visits to get to know these churches. It is also important that the churches get to know the PRC, so that if, in the future, any official ties are established, they are made with full knowledge of one another’s positions—both officially adopted positions and “teaching positions.” As in a dating relationship that precedes a healthy marriage, thorough conversations need to take place over a long period of time before there is explicit discussion of more formal relationship. If the history of the PRC in establishing these relations has taught them anything, it has taught them to be completely open and to proceed slowly.

The position of the PRC is clear: There is no allowance of any divorced and remarried persons to be members as long as their first spouse lives. Accordingly, the PRC are determined that no relationship with another church will lead to divorced and remarried persons becoming members of the PRC. Synod’s 2008 adoption of the Contact Committee’s recommendation regarding the Evangelical Presbyterian Church of Australia demonstrated that resolve. The PRC established a corresponding relation with the ERCA, rather than a sister-church relationship. One significant reason why it is not a sister church relationship is that there may be no free exchange of members or ministers with these churches whom we love because they are not one with the PRC in their view of divorce and remarriage.

A colleague of mine recently expressed in a sermon in my home congregation what has been also my personal knowledge of the PRC and her officebearers: He knows of not one elder, minister, missionary, or professor who has even hinted at a desire to relax, change, or challenge the view of marriage that the Lord has graciously led us to embrace. Our unity in this is a reason to rejoice. 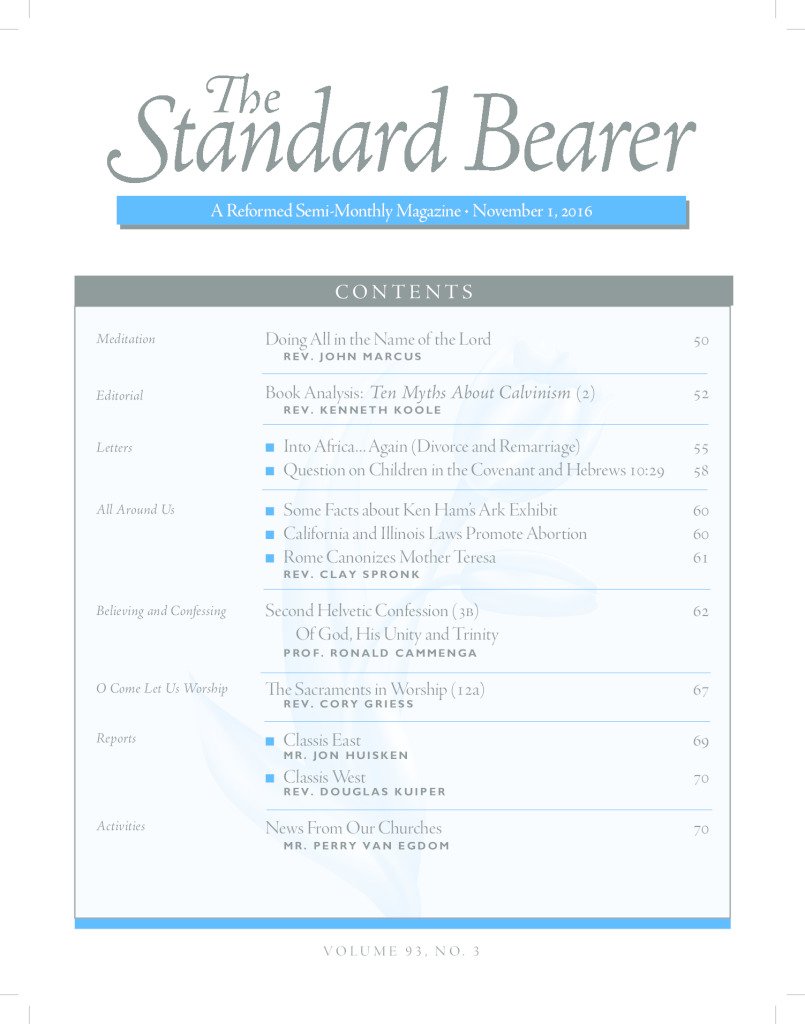