Not all heresies in the history of the church of Christ involve matters of doctrine. Sometimes the heresies which appeared are matters of church government and the corporate worship of God in the church.

In a way, of course, these heresies are also corruptions of the truth. A corruption of church government, for example, is a denial of the truth of the Kingship of Christ over the church. An aberration in worship involves the doctrine of the nature of God and the obligation to worship God in such a way that the truth concerning His divine being is maintained.

In this article we shall be busy with the Roman Catholic corruption of church polity, that is, the proper and biblical rule of the church.

To illustrate the wrong of the Roman Catholic Church in the matter of church government, I shall discuss the pontificate of Innocent III, whose papal rule extended from 1198 – 1216. He is acknowledged, by all students of church history, as the most powerful pope that ever lived up to his time and that has occupied the See of Rome until the present. He was closer to the Roman Catholic idea of the papacy than any other single man in all the history of the church. He is an ideal figure, therefore, to demonstrate what Roman Catholic church polity is all about.

Innocent III did not suddenly come to this position of power. Papal power had slowly developed in the church from a very early date. It had grown through the centuries bit by bit. Weaker popes were often unable to make papal claims stick in the life of the church. Stronger popes not only held firmly to earlier developments, but often built upon what had already been done to expand papal power as much as they could. It is not necessary, I think, to trace that development over the centuries.

A discussion of this matter, however, does leave us with one difficult problem. I refer to the fact that we are confronted with the question of why God allowed the church to remain under a terribly wrong church government for most of the history of the new dispensational church. Tendencies towards the papal system appeared in the church as early as the third century. After Innocent III, they continued in the church until the time of the Reformation, another 300 years after Innocent. So, of the twenty centuries of the history of the church since Pentecost, more than thirteen of them were centuries in which the church lived under a less than biblical church government. The question is, Why?

I do not think that a satisfactory answer to that question can be given. In this respect, too, the ways of God are inscrutable. One idea suggests itself, however, as a possible answer.

Innocent III came closer than any single individual in the entire new dispensation to being the Antichrist. This may surprise some, for we are all acquainted with the worldwide power of Rome, with the rule of cruel dictators who extended their authority over large areas and many countries, and who attempted to crush and destroy the church.

I am saying that papal claims come closer to the final claims of Antichrist than any other institution presently in the world. It just might be that through all those years God was teaching His people that, as John puts it, antichrist is always in the world, and that part of the church’s life is to live, if not under, at least present with and influenced by antichrist.

I leave it to the reader to evaluate that matter in the light of what I write.

Innocent III was born in 1160 in the city of Anagni, Italy. He was born of noble parents in a city well known in Italy because it served as the favorite summer home of the popes. His parents named him Lothario, a name which he kept until he adopted the name Innocent III at his induction into the pontificate.

It seems that Lothario lived the life of a scholarly son of a wealthy family. He went to the best universities in Italy and France, Bologna and Paris. But Lothario was not the idle and spoiled son of nobility. He was an extremely gifted scholar who quickly mastered his subjects. Bologna was famous as a center in the study of canon law, and Paris was the center of study in theology. In both, Lothario excelled.

Early in his studies he began a literary career, and his first book was a stern, dark book on the ascetic life. It was a reflection of his own devotion to asceticism and the importance of living the life of a monk. The book gave him a reputation as a gifted young man who was dedicated to the welfare of the church.

The result of this reputation was an appointment to the college of cardinals at the early age of 29. He was, however, too young to make it to this exalted position on his own merits, brilliant man that he was. He had three uncles who exerted influence on his behalf and paved his way into the Roman curia. We ought not to consider this strange. Simony (the purchase of offices in the church), bribery, and political influence were more important than abilities and gifts in those days.

The college of cardinals was the highest hierarchy in the church under the pope. It was really the administrative body in the church and was responsible for carrying out papal directives and decisions. It was to a pope what a president’s cabinet is today in the executive branch of government in America. It was also the body that chose a new pope when the incumbent died. It was enormously influential, and in it Innocent learned thoroughly how the church operated and where were the reins of power.

When the man who was pope at the time died, a new pope was chosen who was from another branch of Italian nobility, and who turned out to be an enemy of the noble house from which Innocent came. Innocent was forced to retire from the college of cardinals under the pressures of an antagonistic pope. But the time of retirement was well spent in studying literature and writing.

Innocent became pope in 1198. He was chosen by the college of which he had been a member and was called out of retirement to assume the papal chair and tiara or crown.

The crowning of a pope was a glittering pageant. An old observer described it in a passage quoted by Schaff.

At the enthronization in St. Peter’s, the tiara was used which Constantine is said to have presented to Sylvester, and the words were said, “Take the tiara and know that thou art the father of princes and kings, the ruler of the world, the vicar on earth of our Saviour Jesus Christ, whose honor and glory shall endure throughout all eternity.” Then followed the procession through the city to the Lateran. The pope sat on a white palfrey and was accompanied by the prefect of the city, the senators and other municipal officials, the nobility, the cardinals, archbishops, and other church dignitaries, the lesser clergy and the popular throng—all amidst the ringing of bells, the chanting of psalms, and the acclamations of the people…. Arrived at the Lateran, the pope threw out handfuls of copper coins among the people with the words, “Silver and gold have I none, but such as I have give I thee.” The silver key of the palace and the golden key of the basilica were then put into his hands, and the senate did him homage. A banquet followed, the pope sitting at a table alone.

It is interesting to ponder what Peter would have thought of such pomp, though the pope considered himself to be a successor to the humble fisherman from Galilee who suffered martyrdom for the cause of the gospel.

So Innocent became pope, and he developed into the most powerful pope and individual the world has ever seen. One biographer says, “No other mortal has before or since wielded such extensive power.” Another, a contemporary, upon hearing that Innocent was now pope, and that at the relatively young age of 37, saw what this meant for Christendom. His plaintive cry was, “Alas! the pope is so young. Help, Lord, thy Christian world.”

Well-formed, medium in stature, temperate in his habits, clear in perception, resolute in will, and fearless in action. He was a born ruler of men, a keen judge of human nature, demanding unconditional submission to his will, yet considerate in the use of power after submission was once given,—an imperial personality towering high above the contemporary sovereigns in moral force and in magnificent aims of world-wide dominion.

It appears as if all the emphasis ought to be placed on one characteristic of the man: he was a man of iron will. He had control of himself and his own life. In an age when popes were fornicators, gluttons, drunkards, and murderers, not one stain has ever been attached to his character.

But he also had an iron will in dealing with the curia, so that he bent it completely to his will. It was a rod in his hand to wield as he saw fit. He allowed no opposition, no dissent, no individual initiative in the actions of the members.

That iron will extended to his dealings with the kings and princes of Europe. So adamant was he in his purposes and so forceful in his determination to have his way that, by the end of his reign, every ruler in Europe, no matter how powerful, had bowed before his throne.

Innocent was totally dedicated to the church and was determined to make the church over which he ruled the dominating institution in Europe. He not only attempted to accomplish this goal through his own personal diplomacy and iron-fisted rule, but he preached at every opportunity and wrote countless letters, of which 500 are extant. In his sermons and letters he promoted the hierarchical view of church government and advanced the power of Roman Catholicism.

He was a startling picture of what the Antichrist will ultimately be. 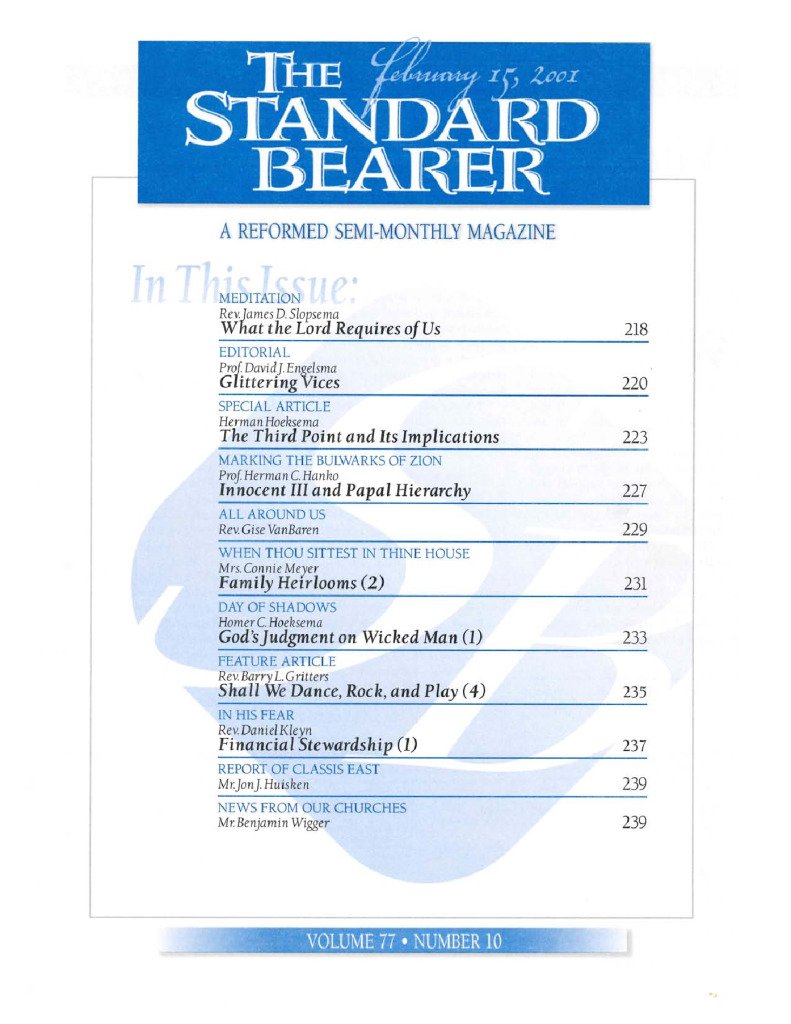