“Increasing Worldliness Within the Church”

“Increasing Worldliness Within the Church”

One of the signs of the end of time, says Jesus, is that “because iniquity shall abound, the love of many shall wax cold” (Matt. 24:12). And the Word declares in I Tim. 4:1, “Now the Spirit speaketh expressly, that in the latter times some shall depart from the faith, giving heed to seducing spirits, and doctrines of devils.” And we read in II Thess. 2:3, “Let no man deceive you by any means: for that day shall not come, except there come a falling away first. . . .”

I would suggest that obviously this sign also is seen today. Many instances could be pointed out. There is an increasing worldliness enveloping the church. One instance of this has caught my attention repeatedly in recent years: movie .attendance—and that, too, as it was officially condoned by the Christian Reformed Synod of 1966. For years, in fact since the beginning of the movie era, the Christian Reformed Church had condemned movie attendance. And that was during the period when movies were relatively “tame.” Now, during the time that these have rapidly degenerated, the position of that church has changed. This has been tragic for the church. It has become impossible within that church to discipline one who obviously seeks the worst of this worldly amusement. Reviews of the worst sort of movie have appeared in some of the magazines and papers closely associated with that church. Nothing can now be done about it. Worldliness has simply overwhelmed many of the members. And all of this has been condoned on the basis of their decision on “common grace” and the basis of the so-called “cultural mandate” of Genesis 1:28.

The report on “Film Arts” presented to the Synod of 1966 is very lengthy. It does present some good examples of reasoning which makes the bad to appear good. I would quote only part of the adopted recommendations on “Film Arts” to show some of this. With respect to the relationship of the Christian to the world, the decision states:

1) God created man in His image and mandated him “to have dominion over all the earth.”

This includes the cultural mandate to develop all the potentials of creation and to dedicate them to the glory of God.

2) Because sin entered the world, even the best works of man are defiled with sin, (cf. Heidelberg Catechism, Question 62), but sin is being restrained by God’s common grace.

3) By God’s particular grace sinners are, in principle, renewed and are restored in their three-fold office as Christians in order that they may acknowledge the Kingship of Christ and may serve Him in all their activities (Heidelberg Catechism, Question 32)

4) The difference between believers and unbelievers cannot always be detected in the products of their cultural activities, but it becomes evident in their motivation, direction, and purpose.

After further statements of a similar nature as the above, the decision then treats the question of the exercise of Christian liberty and points out that the “Film Arts” is a “cultural medium.” Then there follows an interesting statement on the Christian evaluation of the “Film Arts.” The following is set forth as guide to the church:

1) In keeping with the directives enunciated above, it is incumbent upon the mature Christian to exercise a responsible personal freedom in the use of the film arts.

2) Recognizing that the film arts are largely under the control and administration of non-Christian agencies, the Christian must exercise a Spirit-guided and enlightened discrimination in the use of the film arts.

3) The Christian should reject and condemn the message of those film arts products which sanction sin and subvert the Christian interpretation of life.

and thus makes a contribution to a more fully oriented citizenship in the Kingdom of God.

5) Responsible discrimination should also be exercised in the use of the film arts products from broadly Christian sources.

The decision condones in pious language that which in previous years it strongly condemned. Does this pious language now prove that movie attendance is good? And does the decision have its desired results: that members of the Christian Reformed community are now directed to the “good” movies by spiritual experts in the church?

“The proof,” it is said, “of the pudding is in the eating.” One can evaluate the “movie reviews” which are presented in papers published by institutions of this church or by men who are members of it. In the light of this, one can soon find out whether indeed “good” movies are reviewed and recommended. One can soon find out whether the membership of this denomination is guided in properly evaluating and judging the movie.

The reviewed movie has been shown for a lengthy time in Grand Rapids. The reviewer points out some of these things concerning that movie:

The plot is set in motion when the fifteen-year-old daughter of the deputy sheriff (a particularly despicable tool of Posner) returns from Haight-Ashbury, where she has contracted hepatitis and pregnancy, both from unknown sources. Beaten up by her father, she flee to the reservation. Billy finds her there and brings her td the school, where she relates to other people for the first time in her life. The townspeople soon suspect where she is. They try unsuccessfully to get her back, especially after they find evidence that she is running around with one of the Freedom School students, a mystical Indian boy. After a series of confrontations, during which the schoolteacher is raped by Bernie while sunning herself after a skinny dip, the Indian boy is kidnapped, held for ransom, escapes, and is murdered by Bernie and his oafish friend Dinosaur, and the deputy sheriff is shot through the head by Billy Jack, the deputy’s daughter and Billy take refuge in an abandoned church, where they are soon surrounded by dozen; of state and local law enforcement officials with tear gas, bull horns, grenade launchers, and, for all we know, low-yield nuclear weapons. . . .”

Despite its being flawed—largely because the filmmakers try to do far too much—Billy Jack makes for an entertaining two hours of viewing. . . .

There are a number of four-letter words in the screenplay, but these are scattered discreetly enough so as to give the aura of realism without being offensive enough to jeopardize the GP rating. . . .

The review is concluded thus:

By raising these issues, the film serves a useful purpose only if it spurs the viewers to a more profound contemplation of them. One would not, of course, maintain that a movie ought to present us with rigorously argued treatises in ethics. Still, the danger of films like Billy Jack, with their intentionally wide—and successful—appeal to a youthful audience, is that viewers may go away thinking that they have gotten more than they actually have. If high school students come away from Billy Jack with the idea that they have seen answers instead of questions—serious questions—the movie will have served only to advance a sort of self-indulgent notion of turned-on kids as noble savages. The trouble with that is that the emphasis usually falls on their nobility. Further reflection on the questions Billy Jack raises is required in order to show that naive acceptance of oversimplified moralizing can lead to savagery as well. Some of the kids who applauded the moralizing cheered the violence as well.

Perhaps the popularity of Billy Jack is an index of the progress of platitudinous liberalism. Quite clearly, its ideas are ideas whose time has come. That the film does not delve very far into them, then, is a criticism of it only if its “message” is being taken at face value.

May I point out several things?

1) The review does not even once mention the name of God. Why not?

2) The review does not compare at all the presentation of the film with the Word of God and its requirements. There is not even the attempt to evaluate the film in any sort of spiritual manner.

3) Though the decision of the Synod of 1966 couches its recommendations in very pious language, the review (a fruit of that decision) does not even bother about that.

4) There is not one whit of evidence of that exercising of “a Spirit-guided and enlightened discrimination in the use of the film arts.”

5) The reviewer condones sin provided it is “discreetly” done (“There are a number of four-letter words in the screenplay, but these are scattered discreetly enough so as to give the aura of realism without being offensive enough to jeopardize the GP rating.”) Do you even wonder what God would say of that? Are these “four-letter words” scattered enough so that they are not offensive to God? What has become of true Christianity?

6) After the decision of the Synod of 1966, it is evident that there can no longer be discipline of members of that denomination for worldliness in attending even the worst sort of the films of the world.

7) If this film indeed, as described by the reviewer, is the fruit of the so-called “cultural mandate,” if it is indeed an evidence of the “good that the wicked do” as the third point of “common grace” suggests—then it is high time that faithful children of God arise and express their holy horror against these anti-Scriptural claims.

This is one instance of rapidly increasing worldliness which is openly welcomed within the church. Nor ought we to assume a holier-than-thou attitude in condemning the above. We confront that same worldliness. There is the temptation for our own members also to attend the movies of the world—and I have heard the charge that some have fallen into this temptation. And we face the question: what is our attitude toward television programming? Are we perhaps also guilty of that same sort of worldliness which we condemn in others? We must remember the Scriptural admonition to keep one’s self unspotted from this world.

In the light of this developing worldliness, within even the church, how thankful we can be that “the Lord is at hand” (Phil. 4:5). 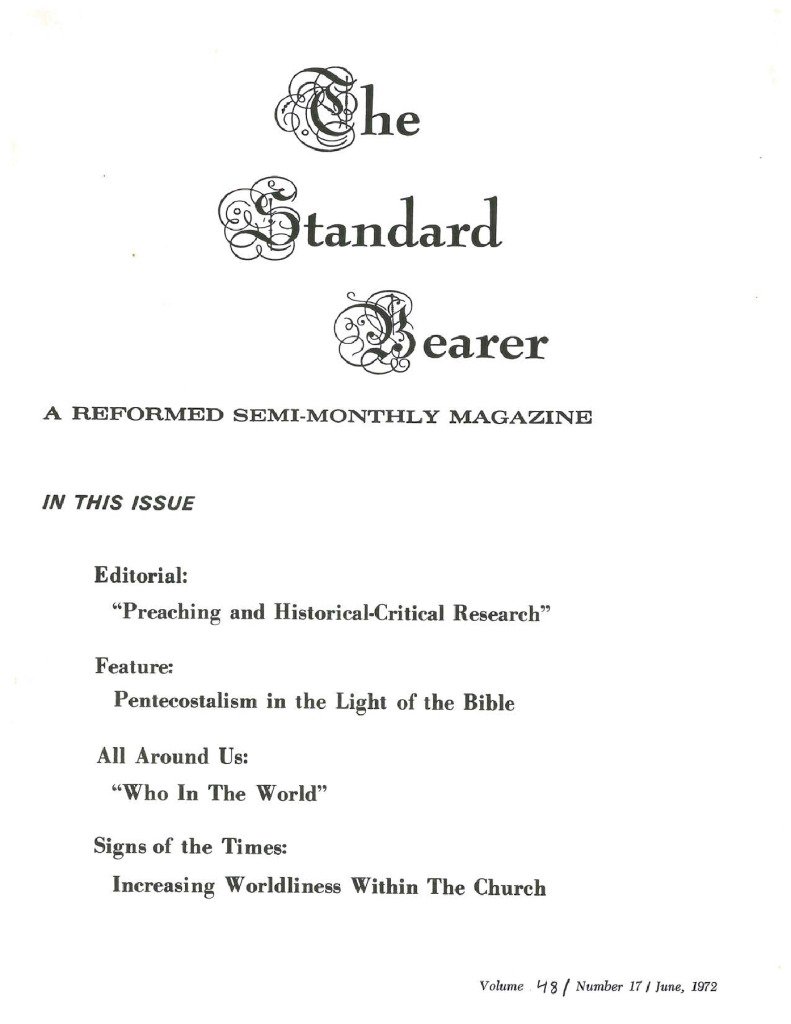