In What Direction Are We Going?

In What Direction Are We Going?

I would like to respond to your editorial of Sept. 1, 1976—commenting on my contribution entitled “In What Direction Are We Going?” First your remarks about my method and approach. Let me say three things.

First, you claim that I should have raised these questions long ago for they have been known since Dec. 1975. My problem is not that we send a minister to help, but my question centers around the specific arrangement; that our minister-on-loan will become a minister of Christchurch under the jurisdiction of theirconsistory and that he will be required, therefore, to endorse the Westminster Confession that contains positions and statements in which we as churches disagree. But these specific arrangements, to the best of my knowledge, did not come to light until just recently. (1)

Second, you imply that I am “saying things which tend to undermine decisions of synod.” (2) This is not my intention or desire. There is a difference between militating against and discussing past decisions of synod. I believe it is proper and even profitable to discuss questions and even express disagreement with such decisions, and this I have done in the spirit of love for the truth and concern for the churches. It is in this spirit that I wrote as I did. (3)

In the third place, you state that my contribution gives the overall impression “as though synod took a very hasty and reckless decision.” It was never my intention to judge synod’s decision as hasty or reckless. Those are your words—not mine. (4)

Turning now to the objective issues, we as Protestant Reformed Churches take exception to two positions of the Westminster Confessions (the official creed of Christchurch). These two positions are the “covenant works” and the remarriage of an innocent party who is divorced on the ground of adultery.

In the second place, is it not true that the covenant of works idea, even as it is set forth by the Westminster Confession, views that covenant as an agreement?—with certain promises, threats, and conditions? And that the conditions of the “covenant of works” are conditions in the Arminian, or, even worse, in the Pelagian sense? I could write more about this but I am limited to 300 words.

In the third place, under the present arrangement with Christchurch, don’t we in effect give our tacit approval to this covenant of works theory? It is on the basis of these considerations that I asked in my previous article, “is this matter of a conditional or unconditional view of the covenant now nonessential?” (5)

This brings me to the second area of difficulty, viz, the question of divorce and remarriage. Here again, it seems to me, that synod gives its tacit approval to a teaching which we view as unbiblical, viz, that the innocent party who obtains a divorce on the grounds of adultery may remarry. In all the arrangements made there is again no declaration which informs Christchurch of our disagreement with this matter. In your editorial you state that you have no reason to think that this matter will be a burning issue. You further state, “we know of no problem in this area.” But there are no official agreements with Christchurch on this matter, and there is a possibility that this becomes very troublesome. The question remains, “If it happens, what are we going to do?”

Furthermore, your example of Rev. H. Hoeksema and his approach does not apply here. You explain that our churches and Rev. Hoeksema at one time took the traditional view on this matter and agreed with the Westminster Confessions. And when Rev. Hoeksema had a change of thinking he proceeded slowly, not making it a matter of protest and appeal, but let the word of God have its own way over the course of time.

But here we have an entirely different set of circumstances. Rev. Hoeksema did not, as we are doing, knowingly put himself into a situation where he might be required to administer the sacraments to those whom he considered to be living in adultery. He was, rather, in the situation where unscriptural marriages existed and then saw the error of the position which he and our churches were taking on this matter. There is a lot of difference between the circumstances which Rev. Hoeksema faced and the circumstances we have now created for ourselves. May we knowingly put ourselves into a situation where the possibility exists and is very real that we will have to do what we know to be at odds with the Scriptures? I think not. (6)

In your conclusion you write, “In what direction are we going? In the right direction! Is what we are about to do in New Zealand proper? Yes, by all means! God wills it. To refuse would be flagrant disobedience.”

And yet no Protestant Reformed minister can place himself under the Westminster Confessions, because of the two points of disagreement. (7)

Let us not compromise with the truth!

The numbers inserted in the above contribution refer to my comments below.

Before I comment, however, I must say something about the placement of this oversize correspondence. It is obviously more than three times as long as the rule on contributions provides. That rule is plainly stated in the masthead, and the brother was aware of the rule, as his article states. Hence, I originally refused it. However, I had to hear second-hand that this was a breach of ethics and an injustice. I do not agree whatsoever, and placement of this article is by no means to be construed either as such agreement or as a change of policy. Just because I exercise my editor’s prerogative to comment on matters which I deem important, even if that be occasioned by correspondence, does not mean that a correspondent is entitled to equal space. That would be folly: in that way we could have a good many correspondents who happen to disagree with me suddenly being elevated to the status of editor-for-an-issue. Before that happens, I will abdicate, let me assure you. Hence, let all would be correspondents consider themselves notified that the rule will be strictly enforced hereafter. My sole reason for placement of this contribution is the fact that I do not care to see the issue beclouded by a hue-and-cry about an alleged “moral issue.”

1) Not true. That these churches have the Westminster Creeds, that they asked for a pastor of their own (who would naturally be required to subscribe to their creeds) and that the Committee approved their request—this was all published.

2) Not true: I specifically spoke of delegates to Synod. Nevertheless, I now add that if anyone continues to have serious disagreement with a synodical decision of this kind, he is morally obligated to follow the ecclesiastical way.

3) Perhaps so, but I do not consider your rash and totally unjustified suggestion that the matter of a conditional or unconditional view of the covenant was now non-essential, or that the Declaration of Principles was being forgotten by anyone, myself included, to be in harmony with “the spirit of love for the truth and concern for the churches.” Such loose talk and unfounded inferences can only tear down, not edify.

4) Indeed, they are my words. I am glad to hear it was not your intention. I nevertheless had that impression from your first article.

6) Rev. H. Hoeksema did just exactly that. Over the period from 1933 to 1943 (as is plain from his own articles in the S.B. in those years) he changed his stand from the traditional one to the stand that remarriage of even the innocent party in a divorce is not permitted. As he mentions in an article dated May 15, 1943 (in response to a question from Redlands) his consistory at First Church by majority vote did not immediately share that change of view. This was in a concrete case. But Rev. Hoeksema neither protested nor appealed, nor refused to acknowledge the persons concerned as members in good standing and to administer the Lord’s Supper to them. In other words, he very deliberately put himself into the position, (without protest or appeal, mind you!) of administering the sacrament to those whom he considered to be living in adultery (as you put it). And he continued to do so for many years thereafter! These are simply undeniable facts.

7) As I wrote earlier, none of us ever expected any of our ministers to subscribe to things he does not believe. It has not been demonstrated, however,—and it cannot be demonstrated—that a Protestant Reformed minister could not subscribe to the Westminster Creeds with those two reservations. (We have, in fact, informed the OPC of Christchurch of such reservations.) In doing so, he would not violate our Protestant Reformed position, but just exactly maintain it. And in doing so, he would not sin against his own conscience, but just exactly maintain a clear conscience. Nor would this in any way affect the doctrine and practice of our own Protestant Reformed Churches. Still more, it would—under the blessing of God—surely affect the OPC of New Zealand for good. Of that I remain convinced.

This will conclude the discussion of these issues. 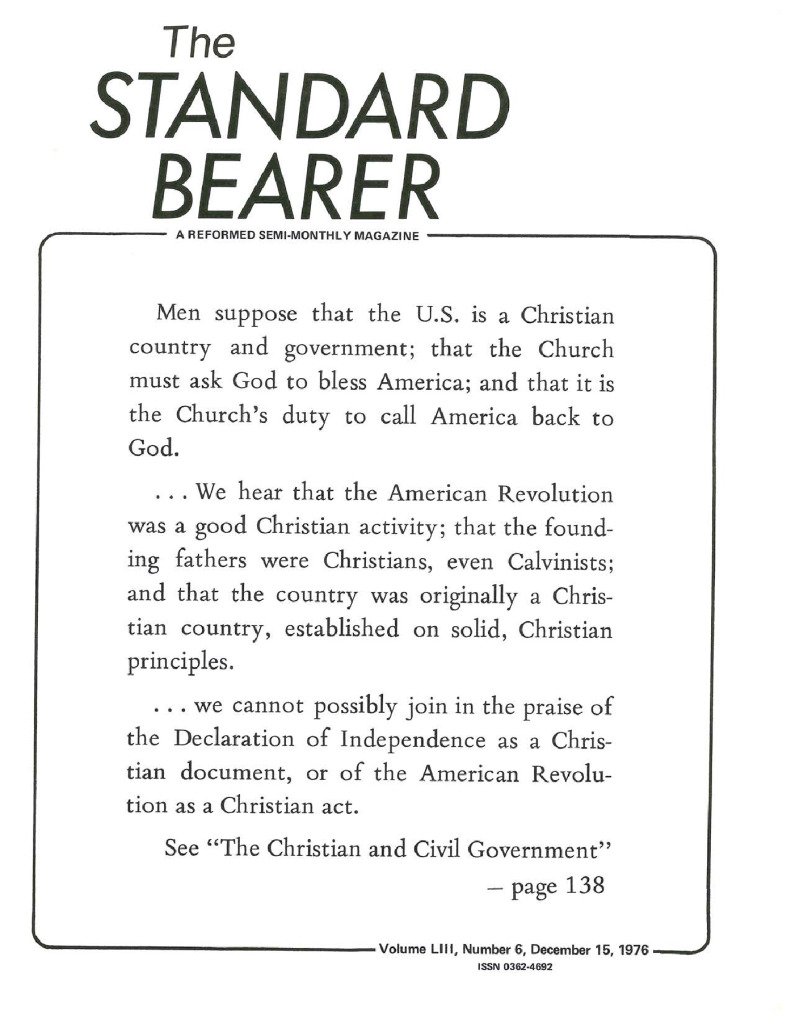