His long-awaited son, Isaac, had been born; and inGenesis 22:5 Abraham called him a lad, which means that he had arrived at that age which includes what we now call teenagers. Ishmael had been sent away many years before this. The pain in Abraham’s soul, that the sending away of Ishmael had caused, was not so intense any more. And peace reigned again in the home of Abraham and Sarah with their son Isaac.

But peace and quietness are not always the best for us. We like to think that this is ideal, yet James shakes us up a bit when he writes that we are to count it all joy when we fall into a situation in which our peace is disturbed and we are surrounded by temptations on every side. He tells us in James 1:2 to count it all joy when we fall into divers temptations, because the trying of our faith worketh patience. Patience here is endurance. For you see, that spiritual muscle, which we call faith, must be exercised to remain in good tone and to retain its strength. And the time has come for Abraham to be shaken up a bit and to be called to exercise his faith in God.

In that light we must understand Genesis 22:1 when we read that, “After these things . . . God did tempt Abraham.” God tempted him in the sense that He tried his faith as silver is tried in the fire. God led Abraham into a situation wherein he would be called upon to exercise that faith, and a situation designed by God to bring Abraham to a greater strength of faith, to work endurance in him. God does not tempt into sin, but He does use sin to purify and strengthen the faith of His people by calling them to exercise it, at the same time giving them the strength to stand firm while the fire, which bums away the dross, rages.

That, child Abraham must slay! O, it is a tragedy, a heart-rending experience when a child is taken from its parents by death. How dreadful the news when parents are informed that their child was killed in an accident, by drowning, or on the battlefield. How awful when a parent unintentionally and unavoidably kills his own child who darted into the path of his automobile as he entered the yard. But how much more demanding is this command of God when He orders Abraham to kill his own son by a deliberate act, and offer him up for a burnt offering! Try to put yourself in Abraham’s place!

And God does not tell him to go ahead and get it over with at once. He must go to a mountain which God will point out, a mountain which is a three-day’s journey away. That means that after three days of the most intimate fellowship with his son that he ever enjoyed, Abraham must end it all. And all that time he must carry this thing with him in his soul. He had three days to think about it, three days in which Satan could work on him to make him turn around and go back home and live with joy with his child. Three days in which strenuously to exercise his faith in God. How the aged man must have loved this stalwart young lad with whom he walked and talked and ate and slept those three days and nights! How much harder it must have been every morning to wake up and say, “Let us go on to do our duty.”

And then came what cut so deeply into his soul: that son asks, “‘Where is the lamb for a burnt sacrifice?” They are arriving at the moment when the sacrifice must be made. The moment is very near that Isaac must be informed. But Abraham cannot do it just yet. And so he tells the lad, “My son, God will provide Himself a lamb for a burnt offering.” He did not himself understand fully what he was saying, but that is exactly the thing God is intent on working in Abraham. He will strengthen and purify his faith so that he does with implicit trust in God look for Him to provide the Lamb of God which taketh away the sin of the world.

However, the hardest part of all for Abraham was not this physical aspect. O, his flesh cried out. It was a sore trial for his flesh. But what God demanded in Abraham—and also in this way was pleased to supply unto him—was an implicit trust in God in which he was absolutely, thoroughly convinced that God would raise Isaac up again from the dead.

This was the promised seed. All the covenant promises revolved around and centered in Isaac. That is underscored in God’s words “thine only son.” Hebrews 11:17 emphasizes this when it speaks of Abraham as the one who had “received the promises.” These were promises that could not and would not be fulfilled in Abraham personally but in his seed after him. And he believed God and still believed Him after this command to offer up his son. Implicit trust he had in God to raise up his son after he had offered him up as a burnt sacrifice. Hebrews 11:17 therefore states that he didoffer up Isaac.

And what makes this so amazing is the fact that Abraham had never heard of or been told of a resurrection from the dead. For us this would not be near the trial it was for Abraham. We have the accounts of so many resurrections both in Old and New Testament Scriptures. And we have the resurrection of Christ Himself after three days in the grave. Not so with Abraham. He had to believe in a miracle the like of which he had never yet heard anything. He had to and did implicitly trust in the Almighty, ever faithful God. To use the words of Hebrews 11:19, “accounting that God was able to raise him up, even from the dead.”

What an amazing faith in God this man showed! God spoke to him, and at once he went to obey. He rose up early, we read, and started out to this mountain. He did not stall for time, hem and haw and drag his feet to prolong the joy of Isaac’s fellowship. He did not have to do so, because he was thoroughly convinced that he would come back with Isaac to live with him and look for the fulfillment of God’s covenant promises in him.

Take a good hard look at Genesis 22:5: “And Abraham said unto his young men, Abide ye here with the ass; and I and the lad will go yonder and worship, and come again to you.” I and the lad, we will go yonder and worship and WE “will come again to you.” He had no doubt in his soul. They are going to worship God, and their very going in that implicit faith in God is worship of Him as God. And why should Abraham say to the young men, “Abide ye here with the ass”? Is it not that his very implicit trust in God moves him to an obedience that will allow nothing to interfere with his walk of faith before God? Surely the reason for leaving behind those whom he took along all that distance is not that the event was so sacred and touching that no other eyes might see it. Rather is it that Abraham realizes that these young men might not understand what he was doing, might judge him to be disobeying God Who gave him all these promises in Isaac rather than actually walking in obedience before Him, and might interfere and not allow the sacrifice which he was intent on performing because he was so thoroughly convinced that God would raise up Isaac from the dead. Implicit trust leads to wholehearted obedience. And wholehearted obedience will not allow for any interference that it can prevent. It may even be questioned as to whether Sarah knew one item of the purpose of Abraham’s journey with Isaac. We read that he “rose up early in the morning and saddled his ass.” There is no delay. God has spoken, and it must be done. There is no loophole left for him to escape the difficult work he is called to do. Faith in God does not seek protection outside of God, and surely not in a way contrary to God’s Word. Faith in God goes forward without looking backward. Faith in God has its eye entirely upon God and looks neither to the right nor to the left. Faith in God looks up to the everlasting hills from whence cometh our help, and from whence alone cometh our help. Faith in God is faith in God alone. Faith in God, when there is that which is at the moment lacking and is needed, says, “The Lord will provide.”

And provide God always does for those who put their trust in Him. He provided His own Son as the propitiation for our sins, and gave a shadow and symbol of this in that ram caught by its horns in the thicket. He provided the pardon on whose basis we may receive all the blessings of salvation, the pardon because of which we may receive faith as God’s gift to us, the pardon in whose light alone we can explain that God’s covenant is with us and our children after us.

Isaac could not be a burnt offering for Abraham’s sins. He could not be our Savior, but the Lamb of God can, and the Lamb of God is. And, after all this trial is over, Abraham goes down that mountain far stronger in his faith than he was when he climbed that mountain. He told Isaac that God would provide a lamb, and he believed every word of it. That is why he kept steadily climbing higher and higher till he reached the proper place. But now when he comes down he understands in a far richer way that Jehovah will provide and does provide in a way that it costs us nothing; and his own son, whom he loved, need not receive one scratch. It costs us nothing, absolutely nothing. Jehovah provides, and provides it all. We go free. Not one little—if indeed there is such a thing—pain of hell will touch us. No smallest fraction of the curse will touch us for our salvation. We, who deserve to be burned up, and to bum everlastingly in hell, and are bound and tied with the unbreakable cords of sin, may be let loose and go down the mountain with Abraham to enjoy the blessings of God’s covenant of friendship and fellowship.

Let us lay hold of this precious truth that Jehovah provides a burnt offering for His people. His own Son was caught in Gethsemane and nailed to the tree of the cross. Let us lay hold of this truth that lets us, as Barabbas, go free. Do not say, But Barabbas did not. deserve, to go free. That is right. But it is also so very true that you and I have as much guilt as Barabbas, at least we have no more righteousness in ourselves than he did. We do not deserve to go free any more than he did. But Jehovah provided the way for such to go free.

Let no man boast of deserving salvation, but let all men confess that our salvation is provided by God from beginning to end. Implicit trust in God says exactly that. It sings,

All that I am I owe to Thee;

Thy wisdom, Lord, has fashioned me.

I give my maker thankful praise,

Whose wondrous works my soul amaze. 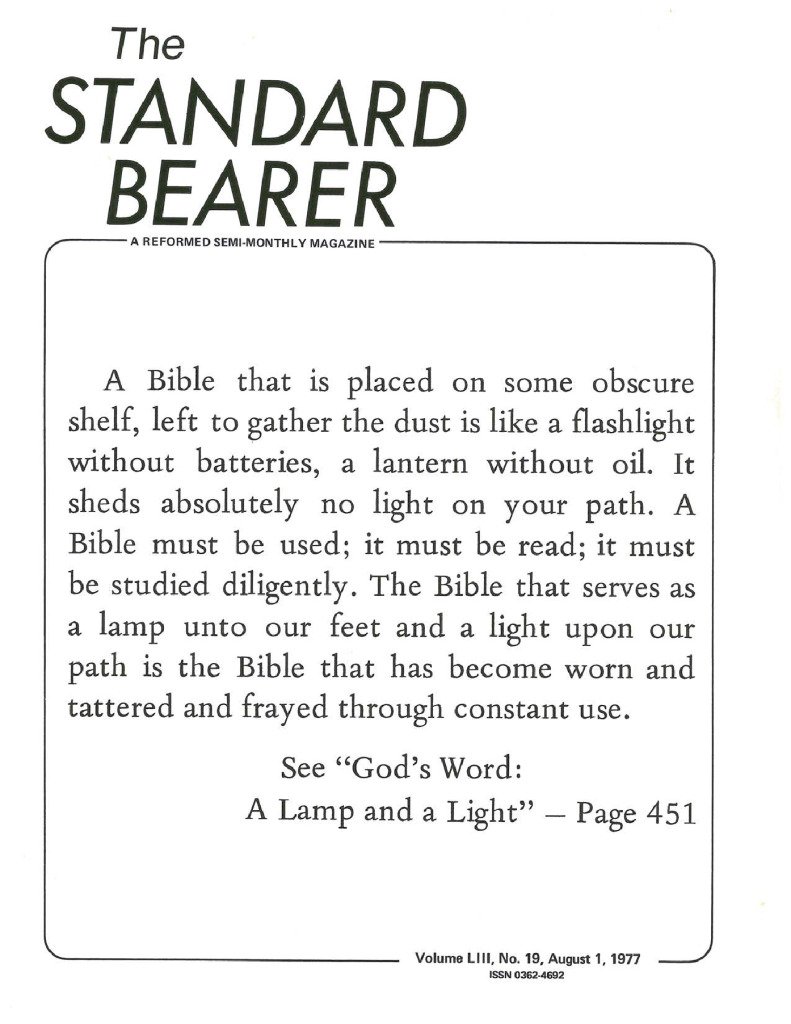