This is the second of the three Pastoral Epistles. The order in which they were written is I Timothy, Titus, and II Timothy. Since we considered the historical setting in connection with I Timothy, we will not repeat these details here.

Let us summarize briefly, what influenced the apostle Paul to write this letter. After Paul was released from his first imprisonment at Rome in A.D. 64, he traveled extensively until A.D. 67, when he was taken captive and returned to Rome. His capture probably took place at Troas where Carpus lived and at whose home he left his cloak (II Tim. 4:13). He was taken to Rome by way of Corinth where Erastus remained (II Tim. 4:20). Upon arrival, he was placed in prison (II Tim. 1:8).

The second imprisonment was more severe than his first. When he appeared for his first hearing before Nero, he was alone, no companion accompanied him (II Tim. 4:7). Later Luke and some others joined him. Alexander the Coppersmith, a Jew in Ephesus, mentioned in Acts 19:33 and II Timothy 4:17, probably took part in his arrest (see II Tim. 4:11, 21). This led Paul to express his conviction that he would not survive the winter (II Tim. 4:21) and that death was imminent (II Tim. 4:6).

While Paul was awaiting death, two reasons prompted him to write this letter to his beloved Timothy. First, he realized that the situation in the church, with its increasing apostasy and opposition, required diligent and dedicated pastors. He saw that Timothy was to fill a, critical need in the church, and this letter was his instruction to this young preacher. Along this line, we see this letter is of special significance to pastors of all generations who must carry on this great task of preaching the gospel. The second reason was Paul’s desire to have Timothy present with him in Rome. He mentioned this toward the close of the letter (II Tim. 4:9-12). In addition, Timothy could also take along his cloak and the books with the parchments (II Tim. 4:13). This indicates that Paul desired to instruct Timothy in person as well as by letter. Whether Timothy did arrive in Rome prior to Paul’s execution cannot be established. Paul was beheaded in A.D. 68, so this letter was written toward the end of A.D. 67.

In view of the increasing amount. of opposition and doctrinal error attacking the church, Paul emphasized the need for doctrinal purity. This is true with all these pastoral epistles. According to Tenney, New Testament Survey page 342, we quote, “Because of this menace, there is a greater stress on formulated creed in the Pastorals than in the earlier writings. The specific doctrinal formulas in Titus, the injunction to ‘hold the pattern of sound words which thou has heard from me’ (II Tim. 1:13), and the frequent sentences of creedal form (I Tim. 1:14, 2:3-5, 3:16, 4:10; II Tim. 1:10, 2:8, 3:16) impress the reader that the Pastorals were written to a church that was beginning to put its faith into articulate terms. Such creedal expressions were current, for the formula, ‘Faithful is the saying!’ is used to introduce a number of them as if they were commonly employed in the oral teaching of the church (I Tim. 1:15, 3:1, 4:9; II Tim. 2:1-11; Titus 3:8). The phrase ‘sound doctrine’ occurs frequently also (I Tim. 1:10, 6:3; II Tim. 1:13, 4:3; Titus 1:9, 2:1, 2:8). The word ‘sound’ means literally ‘healthful’ and is usually connected with good works as well as with correct principles. Creed and life are never divorced in the Bible.”

Such exhortations all pastors do well to study and heed.

2.Paul longs to see Timothy (II Tim. 1:3-5). He prays for him (II Tim. 1:3) and expresses joy in Timothy being a faithful servant, making good use of his spiritual upbringing by his mother and grandmother (II Tim. 1:4, 5).

3.Rather than being ashamed of Paul’s imprisonment, Timothy is exhorted to carry on the work of the ministry, even if some forsake him (II Tim. 1:6-18). He must stir up the gift which God gave him by the Spirit of power (II Tim. 1:6, 7). Even though Paul is in prison, the reason that they must not be ashamed of that is that Christ, Who called them to preach, will give them the victory through the resurrection (II Tim. 1:8-12). Timothy must hold fast sound words and by the presence of the Holy Ghost keep the truth (II Tim. 1:13, 14). Those who forsook Paul at Ephesus, Phygellus and Hermogenes, must not deter them in the work, for others like Onesiphorus were a great help to him both in Ephesus and in Rome. He assures Timothy that the Lord will reward him (II Tim. 1:15-18).

4. Timothy must perform the labors of the ministry even though it will be difficult (II Tim. 2:1-26). It is important for him to commit the truth to faithful men who can teach others (II Tim. 2:1, 2). He is to be a good soldier of Jesus Christ, giving all his energy to the work (II Tim. 2:3-7). This will include suffering, as Paul experienced it now in prison in Rome. Even then, he must be encouraged by the glorious victory which is in Christ Jesus (II Tim. 2:8-13). He cautions Timothy not to strive over words or vain babblings (as Hymenaeus and Philetus) but study to be a good workman who teaches the truth to others. He may be assured that the Lord, Who knows His own; will preserve the faithful (II Tim. 2:14-19). He then gives Timothy guidance in how to deal with people. Timothy must remember that, as in a house there are different kinds of vessels, some of gold, others of earth, so in the church. In dealing with people, he must be sure that he is himself pure and he should avoid unnecessary debate. Also he is to be gentle, apt to teach, and take time to teach his opponents, for it may be God’s will to convert them (II Tim. 2:20-26).

5. Paul continues to instruct Timothy, warning him that he must expect difficult days, but God will see him through (II Tim. 3:1-17). He calls the times, “the last days.” Men will be lovers of themselves and very wicked, especially in their sinful dealing with each other as human beings, disobedient to parents, without natural affection, traitors. They will also be wicked against God and His people, blasphemers, despisers of them that are good, possessing a form of godliness, but denying the power. Yes, they will appear to be wise, ever learning, but never able to come to the knowledge of the truth. Yet, they shall not triumph, their folly shall be known (II Tim. 3:1-9). Paul then directs Timothy’s attention to himself. Timothy should consider Paul as an example of a good minister, in doctrine, manner of life, patience, persecution. Yes, even persecution, for evil men will wax worse and worse. The answer: continue in the things learned, that is, in the Scriptures. They are reliable, for they were given by inspiration and profitable for doctrine, reproof, correction, for instruction in righteousness that the man of God may be thoroughly furnished unto all good works (II Tim. 3:10-17).

6. Paul gives details of the pastor’s labors (II Tim. 4:1-5). He charges Timothy that he preach the Word. This includes reproving, rebuking, and exhorting (II Tim. 4:1, 2). He must also deal with heresy, for some will go after teachers with itching ears and turn after fables (II Tim. 4:3, 4). He must instead do the work of an evangelist and endure affliction (II Tim. 4:5).

7. Paul’s last testimony to Timothy (II Tim. 4:6-8). Paul expresses his confidence that he is about to die and he is ready (II Tim. 4:6). He summarizes his life’s ministry as follows: he fought a good fight and he finished the course, hence there is laid up for him the crown of righteousness (II Tim. 4:7, 8).

8. Paul’s final requests (II Tim. 4:9-19). He asks Timothy to come to him at Rome, the reason being that most of his friends are gone. Demas forsook him, Crescens went to Galatia, Titus to Dalmatia, Tychicus was sent to Ephesus, only Luke remained (II Tim. 4:9-12). He asks Timothy to take Mark along, an indication of a complete reconciliation after their difference on the first missionary journey (II Tim. 4:9). He specifically mentions the need for his cloak, books, and parchments (II Tim. 4:13). He warns Timothy to be careful of Alexander the Coppersmith (II Tim. 4:14, 15). He refers to his hearing before Nero, how he stood alone, but God was with him (II Tim. 4:16, 17). He is assured that God will soon take him home (II Tim. 4:18).

9. Closing salutations and farewell (II Tim. 4:19-22). He salutes the house of Priscilla and Aquila, and Onesiphorus (II Tim. 4:19). He informs Timothy that Erastus stayed .at Corinth, Trophimus at Miletus, sick (II Tim. 4:20). A final request for Timothy, that he come before winter (II Tim. 4:21). He mentions a few of his friends at Rome who send greetings: Eubulus, Prudens, Limus, and Claudia (II Tim. 4:21). The final parting blessing is given (II Tim. 4:22).

1. Review the circumstances in the life of Paul that made him ask for Timothy to come to him in Rome.

2. Cite all the instances in this letter in which Paul instructs Timothy concerning his labors as a pastor.

3. Show from this letter that the principal task of every minister is to busy himself in the Word of God. Why is this important?

4. Give examples from this letter that prove that the instruction given to Timothy is just as timely for pastors today.

7. Reflect upon Paul’s farewell testimony (II Tim. 4:6-8). Why can a child of God face martyrdom in such serenity? 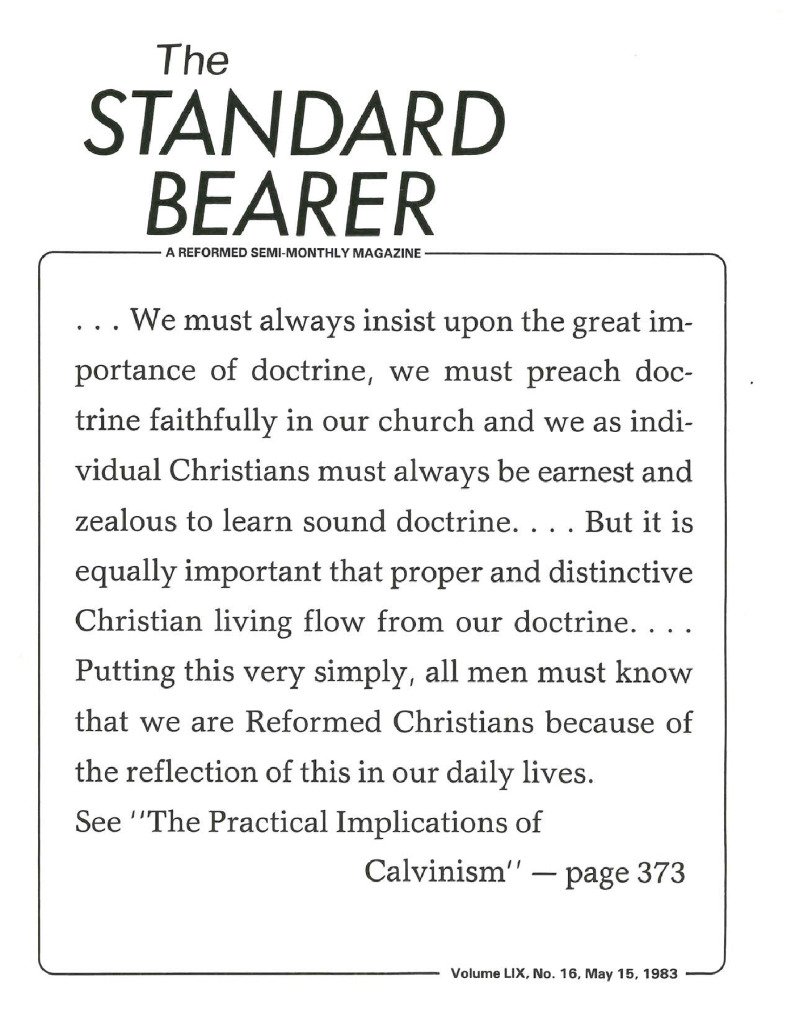