“Hyper-Calvinism” and the Call of the Gospel (6)

“Hyper-Calvinism” and the Call of the Gospel (6)

The previous article began to show that the rejection of the offer of the gospel is motivated, not by hyper-Calvinism, but by Calvinism. It was argued that the offer, since it universalizes the grace of God in Jesus Christ, is inherently a denial of the sovereignty of grace.

The only alternative to the truth of sovereign grace is the teaching that salvation depends upon the free will of the sinner. This is another aspect of the theory of the offer that a Reformed man objects to. We appreciate the fact that in the past defenders of the offer within the Reformed sphere have vehemently repudiated free will, despite the inconsistency of their repudiation with the doctrine of the offer itself. Nevertheless, the teaching of free will is necessarily implied in the doctrine of the offer and can only be repudiated by repudiating the offer itself. First, the idea of the concept “offer” in the context of a universal love of God and a desire of God to save everyone, is that salvation depends upon the sinner’s acceptance or rejection of the offer. In the past, the word “offer” from the Latin word offero was used by Reformed men to describe God’s activity in the preaching of the gospel, because the word has originally the meaning “bring to (someone), present (something or someone to somebody).” All Reformed men hold that Christ is presented in the preaching to everyone who hears the preaching. In this sense, He is “offered” in the gospel. Calvin used “offer” in this sense, and so does the Canons of Dordt: “It is not the fault of the gospel, nor of Christ, offered therein . . . that those who are called by the ministry of the word refuse to come. . .” (III, IV, 9). But this is not the meaning of the word when it is used in connection with a universal love of God and a desire to save everybody.¹ Secondly, the truth of sovereign grace has only one alternative: salvation dependent on man’s willing or running. Since the doctrine of the offer denies the sovereignty of grace, it necessarily affirms that salvation is dependent on or conditioned by man’s acceptance of the offer by his own free will. Faith is then generally viewed as man’s all-important acceptance of the offer by his own free will.

In spite of the insistence of those in the Reformed sphere who defend the offer that they reject the doctrine of free will, concerning the sincerity of which we have no doubt in many cases, the doctrine of the well-meant offer contains the germ of that heresy and will, I predict, result in open ecclesiastical confession of free will where the offer reigns, just as it has already resulted in official ecclesiastical approval of universal atonement.

Certain steps are already being taken in the direction of a formal confession of free will by Reformed Churches. One of these is the widespread representation of faith as a condition to salvation by Reformed theologians. Invariably, a defense of the offer of the gospel will stress that salvation is conditional and that the condition is man’s faith. This is true of A. C. De Jong’s defense of the well-meant offer against Hoeksema in his The Well-Meant Gospel Offer. In criticizing Hoeksema’s denial of the offer, De Jong felt it necessary first of all to attack Hoeksema’s contention that the covenant, the promise, and salvation are unconditional (pp. 72ff.). His own defense of the offer took the form of emphasizing that salvation is conditional: “For implicit in the concept of offer is the idea of conditionality” (p. 100); “Hoeksema argues as if God does not will that his conditional offer be accepted” (p. 123). The condition, of course, is faith. De Jong is representative of all those who defend the offer.²

” . . . the Synod rejects the errors of those . . . . who teach . . . that . . . faith, the obedience of faith, holiness, godliness and perseverance are not fruits of the unchangeable election unto glory, but are conditions . . .”

A condition of salvation is an act that man must and can perform of himself and that salvation depends on. A conditional salvation is, in principle, a salvation dependent upon the free will of man. If the idea of conditionality is implied in the concept of the offer, there is nothing to be done with the concept of the offer than to cast it out of the Reformed tent like an Ishmael. But the Reformed churches today are permeated with the notion that man’s faith is the condition unto salvation. Thus, they are already on the way to a formal confession of free will.

Another step in that direction is taken when Reformed theologians, in the midst of their defense of a well-meant offer, answer the question, “Why, if God loves and desires to save all men, are not all men saved?,” by appealing to a “mystery.” This was the answer of Harold Dekker, professor of missions in Calvin Seminary, in the course of his argument for universal atonement on the basis of the doctrine of the well-meant offer of the gospel. Having said that God loves all men with a redemptive love and that Christ died for all men, he asked, “If God loves all men with a redemptive love, how is it that not all men are saved?”³

In fairness to Dekker, he did not take the last step into full-fledged Arminianism by adopting free will. This leaves him in a curious position. On the one hand, he embraces the Arminian doctrine of universal election (“God loves all men with a redemptive love”) and the Arminian doctrine of resistible grace (God’s grace, which Dekker correctly insists is one—the saving grace in Christ—fails to save many towards whom it is directed). On the other hand, he stops short of maintaining the Arminian doctrine of free will, which is the teaching that all of the others hinge on. One likes to say to Dekker: “Look here, your entire theology demands the doctrine of free will. If you maintain your theology of universal redemptive love, universal atonement, and universal grace in the preaching, take the last step too, so that everybody knows what is what. But if you seriously hesitate to affirm free will, the only alternative is God’s sovereign salvation of some particular sinners: He freely and sovereignly saves some in distinction from others for no other reason than His own good pleasure. But this is the utter destruction of your doctrines of universal election and universal atonement. If you maintain salvation by sovereign grace, in distinction from free will, what have you gained by your doctrines of universal election and universal atonement? You can now preach to all men that God loves them with a redemptive love and that Christ died for them to save them from their sins, but at the same time you must whisper to yourself, ‘But He will only actually save some of you, and He will not save others of you, according to His own sovereign will.’ What you whisper to yourself makes the message of universal love, universal atonement, and a universal desire to save, which you proclaim loudly, a fraud.”

Even though Dekker did not give free will as the answer to the question, “How is it that not all men are saved? O the answer that he did give was a step in the wrong direction. Dekker’s answer was: “Let us . . . (leave) the unexplainable where it belongs—in the infinite mystery of the heart of Him who is Himself love. On the side of divine sovereignty, then, there is mystery. On the side of human responsibility, however, there is no mystery at all. The answer is plainly a matter of unbelief.” It is true that, as concerns man’s responsibility, the reason why many perish is their own unbelief. The fault is man’s own. But it is not true, as regards God’s sovereignty, that one can only refer to the mystery. The Scriptures teach that the reason why not all men are saved is that God has eternally reprobated some men, eternally decreeing that they perish in their sins, and that God, according to His decree, does not bestow faith upon them, but hardens them in sin. In Romans 9, in explanation of the fact that some in Israel were saved and others were not (vss. 6-8), Paul plainly teaches that God loved and chose some, but hated and reprobated others (vss. 11-13). According to this double predestination, God has mercy on some, but hardens the others (vs. 18). The reason why there are “vessels of mercy . . . afore prepared unto glory” (vs. 23) is that the Potter has “power over the clay . . . to make one vessel unto honour” (vs. 21). The reason why there are “vessels of wrath fitted to destruction” (vs. 22) is that the Potter has power also “to make . . . another (vessel) unto dishonor” (vs. 21).

In the Old Dispensation, salvation was enjoyed by one nation, while all the other nations perished. The explanation is not shrouded in “mystery.” Rather, the ex p la nation is the sovereign, discriminating actions of Jehovah: “He sheweth his word unto Jacob, his statutes and his judgments unto Israel. He hath not dealt so with any nation . . .” (Psalm 147:19, 20).

Christ did not hesitate to reveal to the unbelieving Jews that “ye believe not, because ye are not of my sheep . . .” (John 10:26). On the other hand, the reason why other men do believe and have eternal life is that they are Jesus’ sheep, given to Him of the Father in divine election (vss. 27-29).

Why God has chosen to save some, in distinction from others, is indeed a mystery, the mystery of the free and sovereign grace of God, which we who are saved can only adore. But there is an answer to the question, “Why are some saved, while others are not saved?” That answer is the sovereignty of God in predestination. Such an answer is the death-blow to free will. To refuse to give this answer, but instead to speak of a “mystery” is to open up the way to a future solving of the “mystery” in terms of the free will of man. Not only is this answer the death-blow to free will, but it is also the death-blow to universal love, universal atonement, and a universal desire to save, that is, to the offer of the gospel.

In the meantime, before there is official adoption of free will, free will is widely preached and taught in Reformed churches. When ministers practice the offer of the gospel, proclaiming to their hearers that God loves them all, desires the salvation of everybody, and now offers them salvation, they are telling the people that salvation depends upon man’s decision for Christ, and this is the message that comes through to the people loudly and clearly, even though there is no official decision of the church approving free will and even though the preacher does not explicitly say, as many today do, “Now it is up to you.” 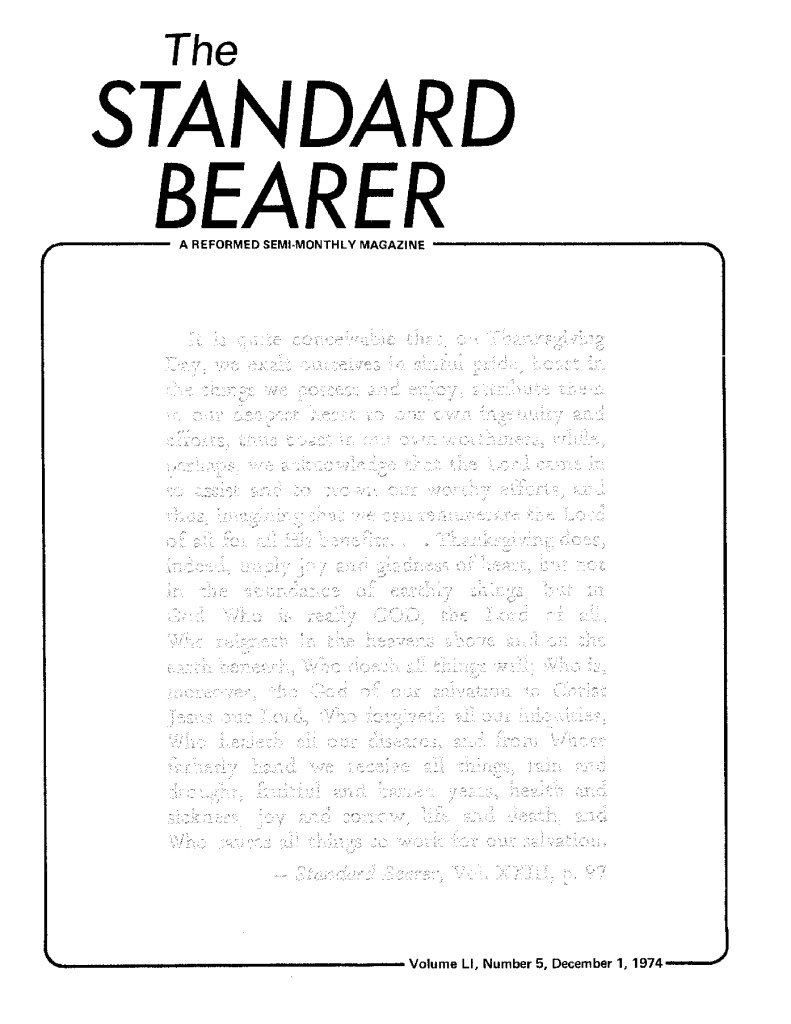