“Hyper-Calvinism” and the Call of the Gospel (20)

“Hyper-Calvinism” and the Call of the Gospel (20)

As the next step in his “apology for particular grace,” Kuyper goes through the entire Bible, showing “that the Holy Scripture indeed teaches particular grace” (Dat De Genade Particulier Is, p. 162). He covers the Old Testament in three stages, the period from Adam to Noah, the period from the patriarchs to Moses, and the period of the prophets. His conclusion is this: “Plainly, exceedingly plainly, it appears that if we put the question to God Himself, how He has intended His grace, neither His operations of grace nor His gracious promises (as far as the Old Testament is concerned, at any rate) give us even the least right to speak of a grace which, according to the counsel and according to the provisions and according to the revealed will of God, would be intended for the salvation of the entirety of all human individuals” (p. 191, my emphasis—DE). In the Old Testament Scriptures, “without any ambiguity, there is the very definite testimony of a grace which is not universal, but particular” (p. 192).

But what does the New Testament say “about the common or particular character of grace?” “What is revealed to us concerning this in and through Jesus?” (p. 193) Kuyper limits himself at this point to the gospels. Matthew, Mark, Luke teach that “Jesus preached that salvation proceeds according toelection and . . , repeatedly and expressly distinguished the elect from the non-elect (p. 194). The synoptics also teach “that the blood of Jesus will be shed, not for all, but for many“: and “that those who obtain salvation do not obtain it according to an uncertain result, but according to the holy predestination of God” (p. 195). God’s grace in Christ is not even intended for every Israelite. Kuyper makes a distinction between an elect kernel and a reprobate husk: “Jesus, like the prophets, very sharply distinguishes the spiritual kernel in Isreal from the unholy mass. Not to all Israel was He sent, but only to the ‘lost sheep of the house of Israel’ ” (p. 199). The gospel of John teaches the same truth, so that the conclusion must be’ “that the doctrine of ‘common grace’ can in no way or manner be harmonized with that which was spoken by Jesus. On the other hand, particular grace was taught by Jesus in the plainest words” (p. 214).

Inevitably, defense of the truth that God is gracious only to the elect raises the question, whether the gospel is to be preached to all men without distinction and, if so, why. This question arises from two quarters. On the one hand, those who hold that God is gracious to all men raise the question as an argument against the truth of particular grace. By this question, they mean to say, “If grace is particular, the Church cannot preach the gospel to all men, as she is called to do.” On the other hand, there are those, the hyper-Calvinists, who deduce from the doctrine of particular grace that the Church should preach only to the regenerated elect. Kuyper confronts this crucial question, in a chapter entitled, “To Whom (Must the Gospel Be) Preached?”: “Now we have come to the question, whether the gospel of Christ must be preached to every soul, or only to the elect?” (p. 292)

Kuyper’s answer is: “to every soul without distinction; God does not will any limitation of the preaching to the elect.” This is not an unimportant matter to Kuyper; he roundly condemns every effort to restrict the gospel: “And so entirely foreign to us is the limiting of gospel-preaching, that we rather condemn as unlawful and un-Biblical every attempt somehow to fence in the preaching of the gospel” (p 292, 293).

But why? Why must the gospel be preached to all, when God’s grace, in that very gospel, is not for all, but for some, the elect, only? The answer that many give to this question undermines everything else that they might say about a decree of election; particular redemption; total depravity; and the like. Their answer is: “because God loves them all, reprobate as well as elect; because God sincerely desires the salvation of all, the non-elect as well as the elect; and because God’s love moves Him to make a well-meant offer to all.” In other words, their answer is: “because God, after all, is gracious to all.” Thus, the dike of particular grace, no matter how laboriously strengthened at other points, is breached, and. the waters of universal (ineffectual) grace inundate the Reformed land.

This, however, is not Kuyper’s answer!

That the gospel must be preached to all “stands fast on a three-fold basis,” no aspect of which is a grace of God to all or a desire of God to save all.

The first reason for preaching to all is this, that “God’s Word nowhere contains a limitation under the New Covenant; rather it lays emphasis on the falling away of every limitation; and actually shows us the preaching of the gospel to all sinners . . .” (p. 295).

“Both John the Baptist and the apostles preached the gospel to all without distinction who came before them or whom they found in the synagogue, without the least limitation,” Especially the preaching of Jesus is proof, for, although He was the one preacher Who knew who were elect and who were reprobate, He preached to all (p. 295).

The second reason is that we “cannot distinguish the sheep from the goats” (p. 295). Preaching is intended by God to gather the elect, but we do not know who the elect are. Therefore, we must preach to all. An implication, says Kuyper, is that “the doctrine of election, rather than restricting the extent of the preaching, offers the strongest incentive to bring the preaching to all” (p. 297).

There is a third reason. This has to do with the fact that God has a purpose in bringing the Word to the reprobate. “It is . . . altogether misconceived, if one says: God lets His gospel be preached to all sinners with the exclusive purpose, that it come to His elect …. Rather, even if all the elect stood on one side and all the lost stood on the other side, the high, serious obligation would still rest on the Church of Jesus to cause both to hear the gospel.” For “to these (elect) we are indeed a savor of life unto life, but we are also a savor of death unto death unto the others; and the preacher of the gospel, also when he brings death, is a good savor unto God. This is what Paul expressly says in II Cor. 2:15: ‘We are unto God a sweet savor of Christ, in them that are saved, and in them that perish‘” (pp. 298, 299—emphasis Kuyper’s).

God intends to convict the lost sinner of the extent of his depravity. The sinner likes to contradict God’s judgment on him, that he is totally depraved. But the awful depths of his depravity are made undeniably plain exactly when he laughs at and rejects the redemption presented to him in the gospel. “It is for this reason, so that He may appear righteous, that God now has the ransom presented (aanbieden, ‘offer, present’—DE) to every creature without distinction” (p. 300). “. . . the preaching of the cross of Jesus must indeed properly be brought to the lost, as well as to the elect, so that the sinner may be convicted of guilt and God may be justified in His ways” (P. 301).

Although the gospel must be preached to all, the content of preaching may not be an announcement that the grace of the gospel is for all. Kuyper will not permit a preacher to say to everyone in his audience, “The ransom has been obtained for you,” i.e., Christ died for you (or, by implication, God loves you). “Whenever you stand as a teacher before a Christian congregation, then you may and must say that (namely, the ransom has been obtained for you—DE), as often as you address the congregation as a whole . . . . But, on the contrary, when you do not speak in a congregation . . . and thus simply address sinners, then you may and must say, ‘Salvation has appeared for every one who believes . . .'” (p. 302). “The presentation (aanbieden) of this ransom in such a way that you say, ‘It is destined for you personally,’ can only be preached to the congregation of Christ or to one who shows himself to you as converted in his heart. Whereas the preaching of the ransom of Christ also to those who go lost must abide by the explicit rule which is described’ by the holy apostle Paul in this manner: ‘to the one a savor of life unto life, to the other a savor of death unto death’: but the preacher is ‘unto God a sweet savor of Christ both in them that are saved, and in them that perish!” (pp. 305, 306).

This was Abraham Kuyper’s clear exposition and powerful defense of the Reformed faith at a crucial moment in the history of that faith in the Netherlands. With this ringing testimony to particular, sovereign grace, he began his labor to restore the Reformed character of the Church in the Netherlands. He did this in the face of great opposition. For 140 years, the theologians at home and abroad had exerted all their powers to obliterate the truth of particular grace, with the result that almost all pastors had forgotten the doctrine, and public opinion in the Church held it for foolishness. Kuyper’s colleagues cursed him from their pulpits: “Whoever preaches another gospel, than that Christ died for all men, let him be accursed.” Even his friends urged him not to write a defense of particular grace, at least not so early in the movement. It would alienate the “weaker brethren,” hurt the cause of the newly created De Heraut (The Herald, the magazine in which Kuyper and his cohorts spread their views and in which the articles on particular grace originally appeared), and jeopardize the plans for the Free University.

Nevertheless, he wrote. The reason? Kuyper tells us the reason. He was concerned “for the favor and the grace of the Lord our God, more than for the favor of men” (p. 448). “Exactly through the confession of particular grace, the worth of His glory and the infinite fulness of His Divine favor reveals itself to our soul’s eye . . .” (p. 451). “It would have been beneath God’s dignity and a disparagement of His honor, and would be found altogether; loveless and powerless in our God, to offer to poor creatures, who lay cast away in their need, nothing more than a chance at anuncertain salvation; to allow His beloved Son to die at the risk that, perhaps, His holy blood would be shed for nothing; and to keep His dear children on earth in anguish and fear, right up to the last gasp, that, perhaps, all will still be lost—no, brothers, that you cannot; that you may not believe any longer, and if you do believe that, Oh, how you grieve and how you belittle the honor of the love and the mercy of the Lord our God!” (p. 452)

We hear much of Kuyper today. The Kuyper of common grace and the Kuyper of a “Reformed world-and-life-view” is proclaimed and acclaimed in the Reformed sphere. But from all the disciples of Kuyper and from the “neo-Kuyperians,” very little is heard of. the Kuyper of particular grace. Indeed, of this Kuyper, the essential Kuyper, we hear nothing.

* Similar is Kuyper’s description of the motive for our preaching to all: “The gospel must be preached, not out of ambition, in order to be able to say, ‘I have been able to save souls,’ but out of obedience to God” (p. 298). 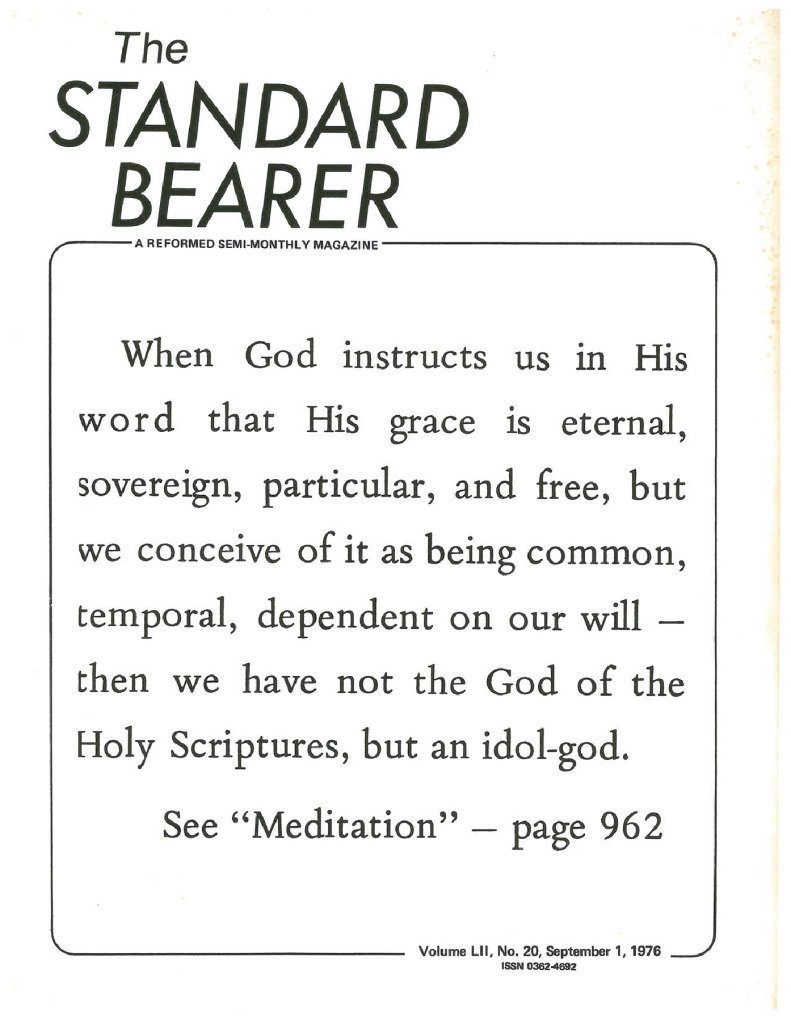