How do we know the Bible is the Word of God? (5): The scope of the whole

Picture a husband locked out of his home. He calls to his wife to open the door. She responds, “How do I know it’s not an intruder pretending to be my husband?” What will show her that the person is in fact her husband? First, it will be the way he says what he says, the tone of his voice, his way of speaking. Second, it will be the content of what he says to her, things that perhaps only her husband would say.

In a similar way the Scriptures are self-authenticat­ing. They show that they are the voice of God by virtue of the way they speak and by virtue of what they say. Just like the wife, the church recognizes this is the voice of her husband.

In this series of articles, we first examined two ways in which God speaks in Scripture that reveal this book can only be from Him. We saw that in the course of revealing Himself in Scripture God repeatedly declares things about the future that then come to pass. We rec­ognize this as the voice of an omniscient God, for whom the end is as the beginning. We saw, too, that in the course of revealing Himself, God brings into unity such an amount of diversity, that it can only be explained by divine origin. This is a fingerprint of the God who is Himself a diversity of persons in one being, and who in omnipotence has orchestrated a book reflecting His own unity in diversity. These two examples are part of the way God speaks in Scripture showing it is His voice.

In this article, we round off our brief examination of what God says in Scripture by seeing that the whole purpose of the book is to display the glory of God. This too is a powerful proof that the Bible is from Him.

Calvin and the glory of God

As we have with each article to this point, we take our lead once more from John Calvin. Calvin regarded the glory of God known in Scripture as the chief way God makes known to us the Bible is from Him. “We believe, neither by our own, nor by anyone else’s judgment that Scripture is from God; but above human judgment we affirm with utter certainty, just as if [through it] we were gazing on the majesty of God Himself, that it has flowed to us from the very mouth of God by the use of men”1 (emphasis added). By virtue of the fact that Scripture’s chief purpose is to open a window through which we gaze upon a glorious God, we can only conclude that the true and living God is speaking to us in these words.

Turretin, following Calvin, makes this one of the great evidences that Scripture is from God: “The Bible also proves itself divine…from the marks which God has impressed upon the scriptures and which furnish indubitable proof of divinity…with regard to the end [goal]: the direction of all things to the glory of God alone.”2 Similarly, the Westminster Confession of Faith puts this purpose of Scripture forward as one of the great proofs of the divine origin of Scripture: “We may be moved and induced.to an high and reverent esteem of the Holy Scripture [by]…the scope of the whole, which is to give all glory to God.”3

Glory to God as evidence of Scripture’s origin

How exactly does this show that the Scriptures are from God? In three ways. First, because God is revealed as so glorious on the pages of Scripture, it is fitting that the same Scriptures also reveal that all things serve to manifest that glory.

Second, because as we see the creation around us, we are forced to conclude that whoever made all things must be glorious with at least the same glory He has revealed of Himself in creation. The Scriptures alone reveal such a God.

Romans 1:18-21 make clear that in the creation we see in a limited way revelation of God Himself. Specif­ically, we see his “eternal power and Godhead.” We see He is eternal, for His creation that is in time and space must be distinct from Him. We see His power, in that such a creation requires a being with astounding power to create it. We see His Godhead (divinity) in the fact that only God could be eternal and have this much power. Romans 1:18 also says we see He is a God of just wrath through creation, for that “wrath is revealed against all ungodliness and unrighteousness of men” in the curse upon the world. Furthermore, the Scriptures state that we see God’s goodness in His provision for His creation (Acts 14:16-17; Ps. 104). In Psalm 104:24 we are told we see His wisdom in what He created and in His sustenance of His creation. In addition, in the fact that marriage is a creation ordinance and relation­ship is woven into all His creation, we see He is a God of fellowship (Gen. 1:16-18; 2:24).

Third, there is evidence of the Bible’s divine origin here because no sinful man or collection of sinful men would ever produce a book for the purpose of making known God’s glory. Romans 1 informs us that men by nature suppress the truth of God that they see in creation and twist the truth concerning God into an im­age more appealing to them (Rom. 1:18; 21-23). They want nothing to do with that glory when they see it. They want to erase it for the ease of their own con­science. Every man is turned inward upon himself in sin. Man seeks his own glory. This is confirmed by the display all men put on in their deeds and their writings (including their “holy” books). In fact, even the holiest of God’s people have a self-seeking nature remaining power­fully in them. So that, you see, if the forty human in­struments alone, though regenerated, wrote the six­ty-six books of the Bible, apart from the inspiration of the Spirit, there is no way the scope of the whole of this book would be the glory of God. Perhaps they would have arrived at it here and there, but never would it have been the pur­pose of the whole.

Neither is there is any way that un-inspired men would have uncovered that, when man sees God in all His glory, bows to His glory, and seeks His glory in heart, mind, soul, and strength, he finds ultimate peace and joy and satisfaction. Uninspired men would never have discovered that our hearts are restless until they rest in seeing and seeking the glory of God. Never would it have occurred to self-seeking men that only in the way of giving up the pursuit of the glory of self and giving oneself over to the glory of God will true happiness come. All this could only be revealed by the true God.

The glory of God and the covenant

The Scriptures are the unfolding of God’s covenant. Given what we have said in this article, that means the purpose of God’s covenant, too, is ultimately the display of His glory. And this is not opposed to God’s purpose in the covenant of bringing His people into His fellowship. He has tied the two together. He has created us as the kind of beings who can only find true joy and peace in seeing and seeking His glory. And yet one cannot desire that glory except new life is in him. This new life is the life of Christ Himself. A life (because it’s His) that seeks God and His glory as Christ Himself does (John 12:28). It is a life (because it’s His) that knows the highest experience for man is to seek and find God in His glory. And it is a life (because it’s His) that knows the highest sight and experience of that glory is in a relationship of fellowship and friendship with this God. All His attributes and all His works come home to us in this bond of intimacy in which we know His glory relationally.

In this relationship we know Him, yes, as the One who is “in heaven,” but this One we know in heaven is “our Father.” To know that the One who is so pure He must cast me into hell for eternity for one sin against Him is yet the God who has taken my sin and borne it away that I might behold His glory while in relationship with Him is the highest life. And, in fact, there is no way that a creature can see or seek or ascribe more glo­ry to Him than in such a relationship.

Having planted new life within, God uses the Word, which by the Spirit powerfully reveals all of this to heart and mind, for the purpose of bringing us consciously into that life, with the combined effect of the revelation of the glory of His own name and our eternal satisfac­tion.

4 Apart from the regenerating work of the Spirit all men suppress what they see and worship the creature instead, but all men see these things about the true God in creation. 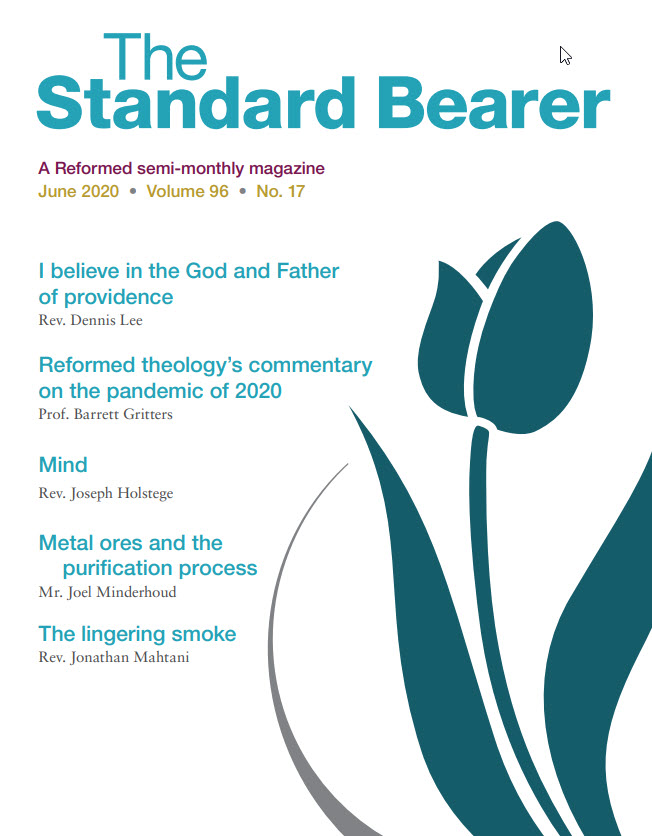