The student enrollment has gone from fifty-two in those early days to the present two hundred ninety-one students. But probably the most interesting part of the enrollment is that, in spite of having a larger total enrollment way back in 1974 (313), we, just this past September 29, held a special society meeting and decided to build a new ten-room school building in the Hudsonville, Michigan area because of proposed enrollment increases. The kindergarten class last year was forty-three students, necessitating a split class; and the thirty-seven for this year required another split class. But from here the situation changes drastically: the proposed kindergarten class for next year is forty-three; the ’82-’83 school year fifty-two; the ’83-’84 year, fifty-three; the ’84-’85 year, sixty-two; and the ’85-’86 year, eighty-two. The computer projection for up to ten years from now shows us with incoming classes of one hundred sixty-seven students. If twenty-five percent is deducted for unforeseen errors or circumstances, the figures are nonetheless staggering; and the need for the new building proposed by the new or satellite school committee was very really impressed on the society at its meeting of September 29.

We from Hope School believe this to be true because of the phenomenal growth of four supporting churches in the last five or six years. Beginning with our Holland Church and its increase in size, especially of young, growing families, to the establishment of Faith Church in Jenison, of some eighty families, this growth is a pleasant reality. What a joy to see young children mature and grow out of our grade school, through our high school, and into Christian adults, marrying and taking their places in our churches! One such example is Rev. Ronald Hanko who had all his training in our school system. Now we are also faced with the fact that these young people are settling in the Jenison- Hudsonville area, and it proves to us at Hope that another school is a necessity.

One of our major concerns is the cost. We read in the August 21, 1950 society minutes that a motion is approved to raise the tuition for one child from $120 to $130; for two from $135 to $145; and for three or more from $150 to $160. (Oh, to be able to go back to those days!) This present year the cost for one student in the grades with the bus is $1,762.50. The burden of these costs can only increase, especially in light of the fact that several of our churches experience large debts and prospective building projects. But what a privilege we have in educating the covenant seed! What a joy to hear them proclaim the majesty of our God at an all-school program, when some two hundred and fifty strong stand to sing and shout the praises of our God! And what a thrill to note that we have teachers dedicated to the same cause, who instruct, mold, and nurture our children in the doctrines we hold dear!

This points also to another need we will have as time rolls on: that of at least one new teacher for each of the next five years. I spoke recently with another former Christian School teacher from outside our circles and who now sells insurance, and he finds it hard to believe our growth patterns. Every school system outside our circles has either stopped growing or has declining enrollment, forcing teachers to look elsewhere for work. Here we will have to promote the idea of our own teachers for some time to come.

The Board at Hope has always worked conservatively toward providing the Christian education we need in our circles. And, because of a very real shortage of trained teachers, we were forced to call on mothers of our Covenant homes, ministers and their wives, and yet others who had not received enough college training to be certified in order to train our Covenant seed. But times have changed; we now have all certified teachers on the staff and no ministers. We also have some teachers with special training and talents for the learning-disabled students and those who have learning difficulties because of physical impairments. Technology has also come to Hope in the form of special hand-held calculators. The recent PTA (October) voted to use some of its funds to purchase these things for the education in math.

One organization connected to our school has helped support us financially when special projects were needed, such as additions or remodeling work, and that organization is our Mothers’ Circle. Each year this group of dedicated mothers works through various projects to raise money for our school. I believe its annual bazaar alone makes in excess of $5,000.00.

Because of the staggering budget which we must look at now and in the future, we need all the financial help we can get. We at Hope are happy with the strong support we receive from our constituents, many of whom have long ago put their last child through our school. Our semi-annual drives of the past several years have gone over our asking goals. No, we don’t have a surplus of money, but we always seem to come up with enough.

As secretary of the Board, I know I can speak for the Board, in thanking our loyal supporters and asking for your continued support—and we mean especially that of prayer. Without God’s continued blessing we couldn’t continue. I believe that holds true for all our Protestant Reformed Christian Schools. I would urge prayer for boards, teachers, administrators, and students that we may be kept in the way of the truth. 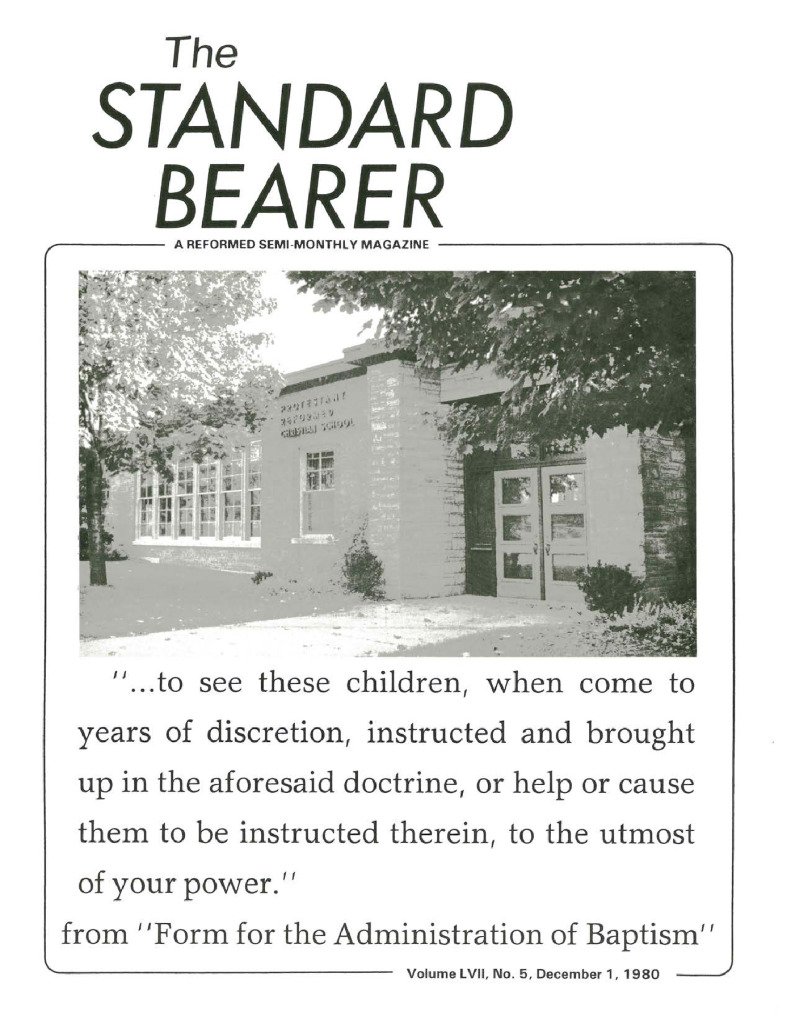