The “house” is no invention of man, but a creation of God in our behalf.

The question whether, had Paradise remained, we would have had houses need not trouble us. It is enough to call to mind that our Savior speaks of a Father-house in the heavens; of one mighty, all-embracing Father-house; the “Father-house with its many mansions.”

In Israel our Lord Himself dwelt in a house on Zion, the house of the God of Jacob; and as now Zion’s temple lies in ruins, believers are built as living stones into a spiritual house which is a habitation of God.

Yea, Scripture goes yet further, and does not hesitate to call God Himself a house, even as He is called a fortress and a high tower, as the psalmist prays in Psalm 31:2: “Be Thou, O God, a strong house unto me, for me to dwell in” (Dutch version).

He who is familiar with the Word knows how high, throughout Scripture, the house and life in the house are held in honor.

Even in Scripture you can observe how the honor of the house is allied to the honor of God, and how “the curse of the Lord comes into the house” (Prov. 3:33) when the soul wanders off in strange paths and abandons her God.

But this contrast is still more strongly evident when you look out upon the world without God, and hear how in that world that has gone astray the foundation of the home is undermined, till finally it must be ruined.

This is not new, for already centuries before Christ Greek philosophers have elaborated ideas that attack the very existence of home and family.

In this respect also the bold language of our times is not new.

Then as now it was told abroad that marriage is an unnatural tie, and only free love responds to the ideal. Then, as now, plans were rife to take newborn infants away from father and mother and bring them up in large state houses for children and large boarding schools. Yea, even the home meals were to be sacrificed, and all people together were to sit at long tables in great halls.

This is the spirit from below, which stands over against the Spirit of the Father-house.

And to this extent you can say that the home, and family life in the home, is a symbol of salvation, and that the underestimation and presently the abolishing of the home is the sure sign of the working of demoniac powers.

The “house” stands to this extent even over against “the world.”

Just as Moses makes the contrast: “When thou sittest in thine house” or “when thou walkest by the way” (Deut. 6:7).

Going out or staying home are even now the words which imply two proper spheres of human life. And he who knows the Scripture knows very well that it does not confine us to our house, but rather calls us out of our house, that in the world also we may serve our God. But this makes it no less a fact that a good many more souls are lost in the world than in the house, that the Holy Spirit is considerably more grieved in the world than in the house, and that the danger of moral poisoning and of getting away from God menaces far stronger in the streets than when you sit in your house.

So is the house a haven of refuge, a tent of salvation, in which you withdraw from before the evil storm of the world, and in this sense too it may be said that the house brings you nearer to God, and that almost all going out from your house menaces to estrange you from your God.

You know the man and his character by it, for one dwells and literally lives in the world, while the other dwells and lives in his house. Both are on the street at times and at other times sit in their house, but with this difference, that the man of the world lives outside and merely sleeps in his house, while the other truly goes out, but presently to come back to his house, as to the center of his life.

Even between people and people you observe this difference.

When you come to Italy and other southern European countries, you find that everyone lives in the street. The houses are less attractive and are not planned to spend the day in them. But there are everywhere large halls, where, when work is done, everyone repairs. Mostly even one’s midday meal is taken out of doors, and on a summer’s day you can certainly see half of the population sitting in the squares.

In countries where the Christian gospel in its soberer form exercised power this was altogether different.

In Scotland and in the Netherlands, home life is almost the all-in-all, and life in the street and by the way has only taken form in this last half century.

In villages and small towns it is not so far yet, but in great cities the custom has more and more gained ground that he who can afford it eats and drinks away from home and spends the evening in all sorts of public places, preferably with wife and children.

“Going out,” that magic word for those who had long to stay at home, is becoming more and more the urge, we would almost say the passion, that rules life, not only with men but equally with women.

He who still “sits in his house” a good deal of the time is scorned as a “house-sparrow,” and already there are many families where, when the weather permits, both afternoons and evenings almost no one can be found at home.

From another angle you find something of this even in very Christian homes.

One has friends, dear brothers and sisters, Christian associates, and the temptation is to spend time in their company, to the neglect of home and dear ones.

Already in the church of Christ in Paul’s day this was observable.

At Corinth, believers would leave their houses, that they might come together with their friends in a large hall and there have a common meal, a kind of love feast. Each brought his own food and drink, and so they were not in their houses but in the hall of feasting.

And when later he observed that certain believers devoted themselves to the things of the kingdom in such a way that they neglected their homes and their families, he did not hesitate to witness against this by his sharp saying, “He who does not provide for his own, is worse than an infidel” (I Tim. 5:9).

No, faith in Christ Jesus should not loosen the ordinances of God respecting life, but sanctify and draw them closer.

Not by letting home life down in appreciation, but by exalting and consecrating the same, one opens for himself the way to the Father-house that is with God.

Our “house” is so much smaller than the “world.” It is as an oasis in the wilderness of earthly barrenness, as an island in the world-sea.

In the house it is quieter, more restful and calm. The wind of the day does not blow there so strongly and the noise of life has no entrance there.

At home you are used to your surroundings, hence by what there you see and observe you are not so diverted, not so distracted, not carried so much outside of yourself.

At home there are fixed customs and usages that have been practiced by your relatives, by your generation, in your own family, and this fixed manner of life offers you a support, suits your nature and inclinations, is in harmony with your entire inner existence, and thereby holds you in paths of holier sense.

At home there is more truth. In the street, in the open, and with the great public almost everything is camouflaged and dissembling. Always a smile about the lips. Always the urge after interesting conversation. But at home the mask is laid aside, and you know the man as he is.

In the street is cool politeness, as the head is uncovered before one another and mutual bows are exchanged, but at home is the habitation of love, the glow of affection.

Above all, when you go on the street, everything tends to break up fellowship of soul with your God; while in your home you pray, at home God’s Word lies open before you, at home with your own you can sing the praises of your God.

That God’s people might be wise and not fall into the snares of evil.

When so much cooperates to undermine the power and the blessing of home, in our circles the foundations of the home life must be strengthened. 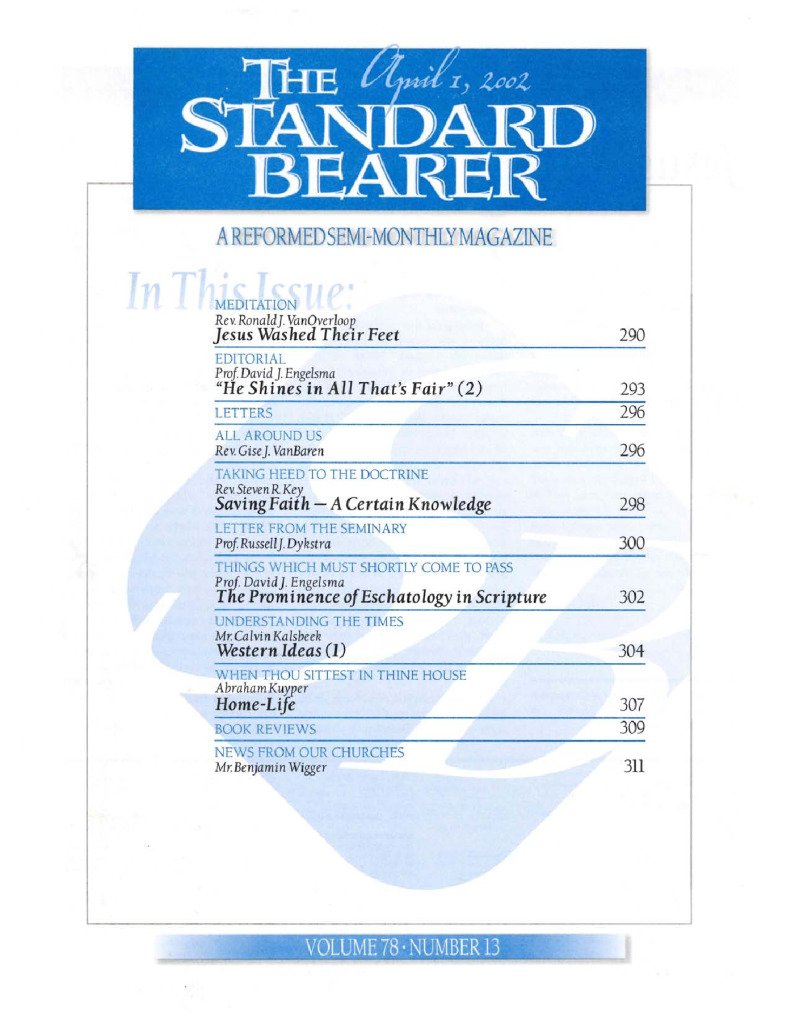