His Own Received Him Not

His Own Received Him Not

“But Peter followed Him afar off unto the high priest’s palace, and went in, and sat with the servants, to see the end.

Now Peter sat without in the palace: and a damsel came unto him, saying, Thou also wast with Jesus of Galilee.

But he denied before them all, saying, I know not what thou sayest.

And when he was gone out into the porch, another maid saw him, and said unto them that were there, This fellow was also with Jesus of Nazareth.

And again he denied with an oath, I do not know the Man.

And after a while came unto him they that stood by, and said to Peter, Surely thou also art one of them; for thy speech bewrayeth thee.

Then began he to curse and to swear, saying, I know not the Man. And immediately the cock crew.

And Peter remembered the word of Jesus, which said unto him, Before the cock crow, thou shalt deny Me thrice.

And he went out and wept bitterly.”

This was a very black night for the Lamb of God!

The events follow quickly the one after the other.

There is the unspeakable anguish in the garden across the brook Cedron. The sleeping disciples: there is to be no human sympathy with Jesus. Then there is the betrayal of Judas; the binding of Jesus, and, in the palaces of Annas and Caiaphas, the mockery, the beatings, the spitting on the Holy Face!

The godless have their hour: they set Him at nought!

And the Cross casts its shadow before.

But first the Lord is to drink one of the bitterest draughts out of the cup of the wrath of God: one of His dearly beloved disciples is to deny Him!

And it shall again be fulfilled: His own received Him not!

Let us look at this denial on the part of the Rock: Peter.

There are three stages.

John and Peter follow the sad procession as Jesus is brought first to Annas. And since John was known to the High Priest, he may enter the court of the palace. And through his good offices, Peter may also enter.

But the damsel which had the charge of the gate look at Peter and recognizes him. (John 18:17)

There are four versions; when peter is connected with Jesus and His own:

“I know not what thou sayest!”

“I know not, neither understand I what thou sayest.”

And then? The cock crew for the first time: a fair warning is given to Peter. It should have recalled to him the word of Jesus: “Before the cock crow twice thou shalt deny Me thrice.”

A little while later another maid recognizes him, and speaks to those that were seated around the fire. But here are Peter’s answers:

This second denial is accompanied with an oath, which should not surprise us. When once you set your foot on the path of falsehood and sin, you must needs grow in wickedness. The first time you steal a nickel, and suffer. But the second time you steal a quarter, and the pain is not as severe.

Here is also a difficulty of which the Higher Criticism has made mountains. Matthew records that the second denial was occasioned by a maid. But the second answer in Luke is:

Still, the answer is easy. The maid indeed introduced the statement that Peter was one of Jesus’ disciples, but she did not speak to him personally. She addressed those that stood around. How natural that one of them took the damsel’s charge and say: Correct, he is one of them! And Peter then addressed that man, and said: Man, I am not!

And the third time they recognize him there is abundant evidence: Thy speech shows plainly that thou art one of them: thou art a Galilean! And most of all: a kinsman of Malchus, whose ear Peter hewed off, is there, recognizes him, and affirms: Thou art one of this Man’s disciples!

We shudder to continue the story: he began to curse and to swear, saying, I KNOW NOT THE MAN!

He began to curse and to swear. What does this mean?

To curse is that you call down God’s damnation on yourself. By the way, that’s the terrible way in which people curse in the Netherlands. Not here in America. Here they ask that God may damn the other fellow. But in Holland they pray that God may damn themselves. And that is what Peter did. He said in effect: I may be damned by Jehovah if I know this Man.

To swear is worse.

To swear is this: you call Jehovah down to earth alongside of you in order to substantiate the truth of what you are saying.

And so in effect Peter said: Jehovah knows that I do not know this Man.

The denial is thrice complete.

As far as Peter is concerned: nothing binds him anymore to either Jesus or the disciples of Jesus.

Who would not tremble, nay, shudder?

Can you explain this strange behavior of Peter?

A little while ago he took a sword and tried to kill Malchus. Personally, I think he meant it when he said that he would go to death or to prison with Jesus.

Here are a few damsels, and a few soldiers who were at ease, without authority: and he is afraid!

When no one knows the true name of Jesus, Peter calls Him: Thou art the Christ the Son of the living God! And now?

Let’s try to explain it.

First, it had been a long and a weary night, full of disappointments. Christ acted like a slave in the foot-washing; He had prophesied that one would betray Him, another would deny Him, and all would be offended in Him; He assured the disciples that He would be bound, spit upon, scourged and killed!

Yes, it had been a very sad night. And in the garden they slept for sorrow, so we read.

And disappointing too. They had expected that Jesus would be more than David and. Solomon combined. They expected Jesus to sit on the throne of David in an earthy kingdom, and that the hated Romans would be defeated.

But nothing remained of their dreams.

Yes, Peter did take the sword and, as always, began, the fight against the soldiers of the hated Sanhedrin, but here is an important point: Jesus did not want to fight! He acted like a little lamb. And they were offended. If Jesus had said: Come on! Up and: at them! They all would have fought to the death for Jesus. But that was not the style of God! His style is the meek lamb, dumb before those who sheared Him.

And they were offended.

Second, Peter stands there before those damsels and maids and soldiers in the weakness and sinfulness of human nature. And then you can expect anything. Watch how you act, and weep.

Yes, Christ called him the rock, but flesh and blood had not revealed the name of Jesus, but the Holy Spirit.

And finally, remember the devil, and Jesus’ words. The devil was greatly desirous to especially sift Peter like wheat. Well, here you see Peter in the sieve of the devil.

What are the reasons for this denial?

The Reformed child of God asks: Why did God will that this denial should take place? Where is the wisdom, of this terrible chapter?

Here are the reasons: they are five.

First, Simon must go through a process where he may bear the name Peter.

He was altogether too self-confident. You all know his boasting: I shall never be offended even though all these are. I will go to prison and to death for Thee! I shall never deny Thee!

Do you remember how he also wanted to tread upon the water? Suppose he had. Suppose the Lord would have allowed him to walk on the water toward Jesus, and with Him, back to the ship. I ask you: upon whom would the eyes of the disciples have rested in admiration, on Peter or on Jesus? You know the answer. He was too proud and too self-centered. He was glorious in his strength. Peter has to learn that apart from Christ he can do nothing.

Second, the devil must have his hour. Jesus must suffer death in all its forms. Death is also separation of that which belongs together. And so the devil shall do his part to tear. Peter away from Jesus. He tore all 12 away, and the foremost will deny Christ with swearing and curses. That’s the devil’s part too.

Third, all of the church, to the end of time, must have a good warning. O, I am glad that the story of Peter’s denial is there. I would plead with you: do not look down on Peter. Peter is you! His denial is there that you may learn that you must rest on the Rock of ages.

Again, God must be able to give us a wonderful example of the kind of LOVE He has for all His children dear. Some say that Jesus looked His stern disapproval. Perish the thought! Oh now, but that look was wounded love. The denial of Peter must serve to give you and me this look of Jesus. It is heavenly in quality. That look of Jesus from a face, bloody and .weary, with eternal death written upon it, is expressive of God’s own heart for you, my brother.

He is forgiven. First, in a very personal interview with the Risen Lord.

Second, in a public interview. The whole world may read.

No, my dearly beloved in the Lord; He did not scold him. He merely said three times: Simon, son of Jonas, do you love Me? 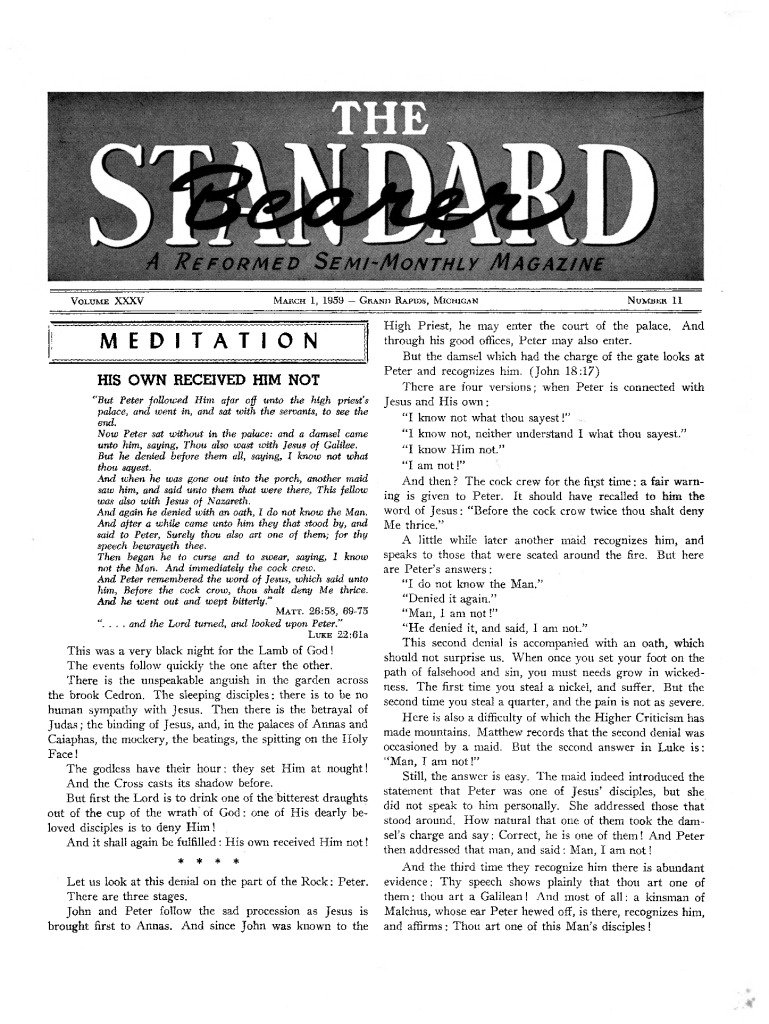