Henry Danhof (7): Deposed and Cast Out

Henry Danhof (7): Deposed and Cast Out

When we last left Henry Danhof, he was making a promise to the delegates of the Christian Reformed Synod of 1924. His promise was occasioned by the synod’s adoption of the theory of common grace as binding doctrine in the CRC. Almost before the ink of that decision in the synodical minute book was dry, Danhof submitted a document of his own. As we rejoin him now and peek over his shoulder at this letter he submitted, we find in it his conviction that his and Rev. Hoeksema’s statements were in harmony with Scripture and the confessions, and that the three points of common grace were not. And then this concluding promise:

In as much as this is my deepest held conviction, Synod will surely understand me when I declare at this time that I believe it is my calling before God and the churches not only to protest formally against these synodical decisions, but I also hope to take practical measures against them, both as a delegate from Classis Grand Rapids West and as one of the two brothers who are condemned in relation to the above-mentioned three points. Honesty demands it is my duty to say so.¹

This was no rebellious threat on Danhof’s part, as if he were raving in stubborn insubordination against the synod. Rather, his promise came at the end of a cool-headed and well-reasoned demonstration that the three points of common grace were not Reformed. And if they were not Reformed, how could any Christian Reformed minister in good conscience tolerate them? Danhof’s promise was simply the honest, inevitable conclusion of his Reformed and biblical convictions.

Henry Danhof was as good as his word. The “practical measures” he had promised in July were immediately forthcoming in his preaching and his writing. He had always preached that God’s grace was for His people alone, and he continued to do so. But Danhof now began a regular program of writing as well. Along with Rev. Herman Hoeksema and Rev. George Ophoff, Danhof became co-editor of the Standard Bearer, with the first issue appearing in October of 1924. In this paper, the three ministers explained the errors of the three points of common grace as adopted by the Christian Reformed Synod.

Henry Danhof’s preaching and writing did not go unnoticed. Several consistories in Classis Grand Rapids West were of a mind that Danhof should be required publicly to agree with the three points of common grace. But instead of approaching Danhof’s consistory in the First CRC of Kalamazoo, the consistories went directly to Classis West. They entreated classis to press Danhof for a statement whether or not he agreed with the three points. Classis Grand Rapids West met on January 13, 1925, and sent the following order to Danhof’s consistory:

When the consistory of First CRC Kalamazoo received this order, they had a decision to make. Would they require their minister to make such a promise? The consistory was in agreement with Danhof’s position on common grace and did not see how they could demand of him the promise that classis sought. The consistory also detected an assumption on the part of classis that Danhof was sinning by publicly opposing common grace, but no specific charges of sin were being brought to their attention. Therefore, the consistory responded that they would not put classis’ demands to Rev. Danhof. Instead, if classis had a charge of sin against Kalamazoo’s pastor, they should make that charge to the consistory so that it could be dealt with properly.

Classis Grand Rapids West met again to deal with Kalamazoo’s response. Henry Danhof was a delegate. The classis agreed that it did not really have any accusations to bring against Danhof, but that classis still wanted Kalamazoo’s consistory to enforce the orders they had been given. Danhof sat and listened to the discussion as it went back and forth. He observed as classis drew up a letter to Kalamazoo with the same orders as before. When it was all finished, he asked for the floor. Solemnly, he informed the classis that he would resign from the ministry of the Word at his next consistory meeting. Later, Herman Hoeksema would speculate that Danhof was trying to protect his consistory from any more attacks by Classis Grand Rapids West. Perhaps Danhof thought that with him out of the way, classis would leave the consistory of Kalamazoo in peace. As it turns out, classis had no such intentions. As soon as classis heard that Danhof was going to resign, it declared that Kalamazoo’s elders would then have to submit to the two demands previously given.

Whatever Danhof’s motive may have been in announcing his intent to resign, he followed through on it at the next consistory meeting. When the men were all assembled, Danhof asked permission to resign from his office as minister. The consistory refused to grant Danhof’s request. So Danhof tried again. And again the consistory refused. As an anniversary book of First CRC Kalamazoo states, “For the sake of peace, our pastor asked, repeatedly, permission to resign; but the Consistory declined the offer.”³

Classis Grand Rapids West was losing patience with Kalamazoo and its pastor. Because the consistory refused to press classis’ demands upon him, classis approached Danhof directly with its two requirements. Danhof responded that classis was overstepping its bounds. If the classis had suspicions or accusations to bring, then let them be brought. But until the consistory received such charges, Danhof and his consistory would not place themselves under the two demands of the classis.

This, the classis deemed to be insubordination on the part of Rev. Danhof and his consistory. On January 24, 1925, “without any further deliberation,” classis “proceeded to depose, first the Consistory and thereupon the pastor of Kalamazoo I.”4 Rev. Danhof had been removed from the ministry in the Christian Reformed Church.

Classis Grand Rapids West appointed Rev. G. J. Haan, minister of the Second Christian Reformed Church of Kalamazoo, to preach in Kalamazoo I the following Sabbath, since Danhof had been deposed. However, Danhof felt the classis to be in grave error, and was concerned about what would happen to the members of his congregation. It was no mere personal slight that prompted Danhof to take the following actions, but a concern for Christ’s sheep. He secretly arranged with the consistory and congregation for the worship service to begin half an hour earlier than normal. Several of the young men of the congregation agreed among themselves to sit in the front rows of the sanctuary as a kind of bodyguard for their minister, should anyone try to stop him from preaching. Imagine Rev. Haan’s surprise when he arrived at church only to find Rev. Danhof in the pulpit and the service well underway. Unable to do anything else, he turned around and went home. Thus Rev. Danhof, although having been removed from the ministry in the Christian Reformed Church, kept his pulpit and congregation. 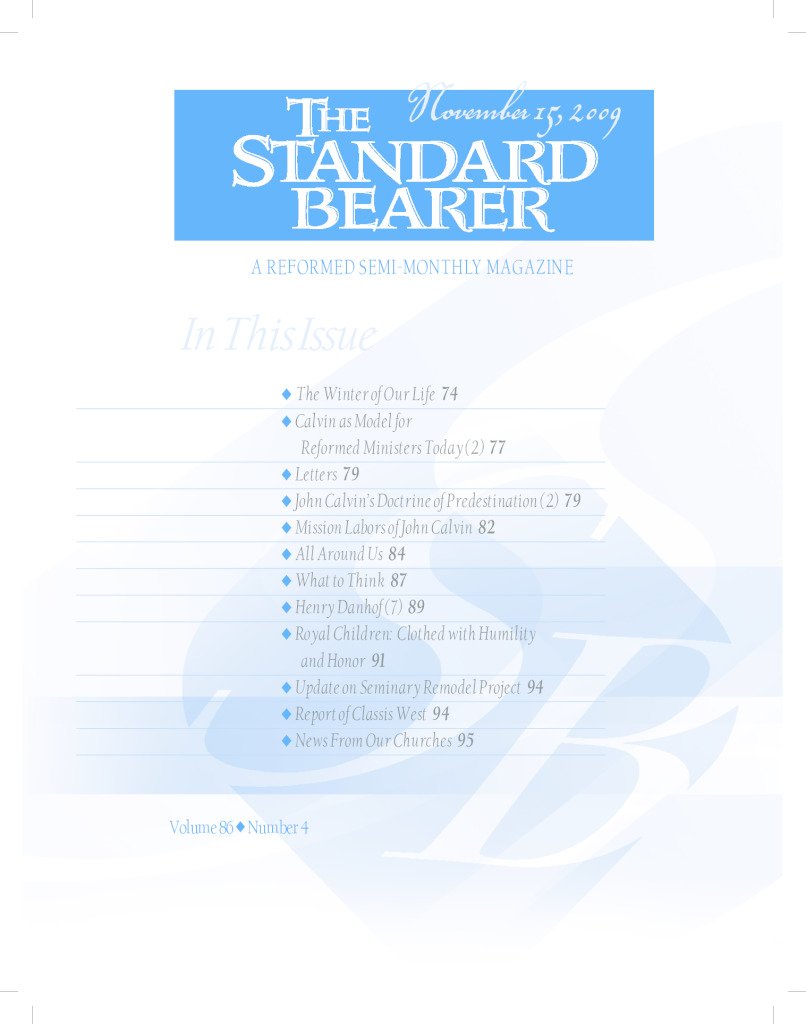