Question: Acts 19:39 speaks of “it shall be determined by a lawful assembly.” Can an unannounced consistory meeting, which suspended Rev. De Wolf, stand the acid test of this passage?

Question: Is it correct that a minority of 10 elders depose the majority of 11 elders? That same principle being applied, is it not also true that 2 elders could depose 19 elders?

Question: Would you say that any person who doesn’t agree with you in ,this matter, but takes the side of Rev. De Wolf, is not Prot. Ref.?

Answer: I’ve already answered that question, I think. If you will formulate that question again, as it should be: if any person is not agreed with the Prot. Ref. truth, expressed in the Three Forms of Unity, as interpreted in the Prot. Ref. church, then he is not Protestant Reformed. I do not count. You do not have to agree with me. If you think I’m wrong, protest. But don’t talk.

Question: If you people were convinced that Rev. De Wolf and his supporting elders were in the wrong, why did you separate instead of appealing to Classis?

Question: Is the letter signed by Rev. De Wolf and Mr. S. De Young, of which we understand all our consistory members received a copy factually the truth, or are there lies in that letter?

Answer: I don’t know what you mean by that letter. I didn’t receive a letter like that. I don’t know what letter you refer to. O, I think I do in a way. I don’t have the letter with me, otherwise I would read it. But I don’t have it. But I think there is one statement in that letter which I recall. I think that’s the letter you refer to. That letter states I think, that in the June 1st meeting, where the decision was made to suspend De Wolf and depose the consistory unless they apologized, that decision was taken under duress. That’s not true. There was no duress. I explained to you all that happened at that consistory meeting. Nothing more. I explained to you the whole thing. Duress? Besides, the elders that were present, the opposing elders that were present certainly did not show any duress. They did not show any strain. They simply stayed where they were. They were not affected. So I think that’s a story. No duress. Except, of course, we had the advice of the Classis. No more. We could not have influence, exert any duress, any stress upon any of the other consistory members. We didn’t either.

Question: Why was this mass meeting necessary, and why not wait with any mass meetings here out West till the. churches have spoken in their broader gatherings?

Answer: I already have answered that I think. This mass meeting was not called by me. I was asked to speak here. And the reason is also plain. We cannot, we cannot have a thing like this in our churches without doing harm to our Prot. Ref. cause. Unless the people are informed . . . . they must be informed . . . And they are informed here, without any question. They have a right to know. Has nothing to do with the broader gatherings. The classis has spoken already. The only meeting that has to speak yet is synod. In the meantime, we have a right to tell you exactly what’s happening. And you have a right to know.

Question: Is it not premature, and entirely out of order, if a local consistory at this stage expresses itself officially on the question as to which is the legal consistory of Fuller Avenue?

Answer: Of course not. That stands to reason. That’s not only not premature, but that’s necessary. How can you work otherwise? If there is no legal consistory at all, there’s no congregation. Now, for the present the others claim too that they’re a legal consistory, but they know better. I assure you that they know that they aren’t. And I assure you, at any rate, that the classis will determine that they are not. The classis has spoken. But you cannot do anything else. What else can you do? You cannot wait to determine what’s the legal consistory. We decide that for ourselves.

Question: We understand you claim that the Classis will justify your action of suspension and deposition. How do you know that the classis will not be satisfied with the apology which Rev. De Wolf tendered?

Answer: Because the Classis already has spoken. The Classis said as to the statements that they are literally heretical, regardless of how the Rev. De Wolf explains them. On that basis he was deposed or suspended.

Question: Doesn’t suspension and deposition principally imply that you excommunicate these men from the church of Christ in case they do not confess what you claim to be their sin?

Question: What do you think? Should the local consistories take an official stand at this time, and express themselves on the question as to what they consider to be the legal consistory of First Church in Grand Rapids?

Question: Why was not the apology of De Wolf received by the Consistory? Who determines the form of a man’s apology? 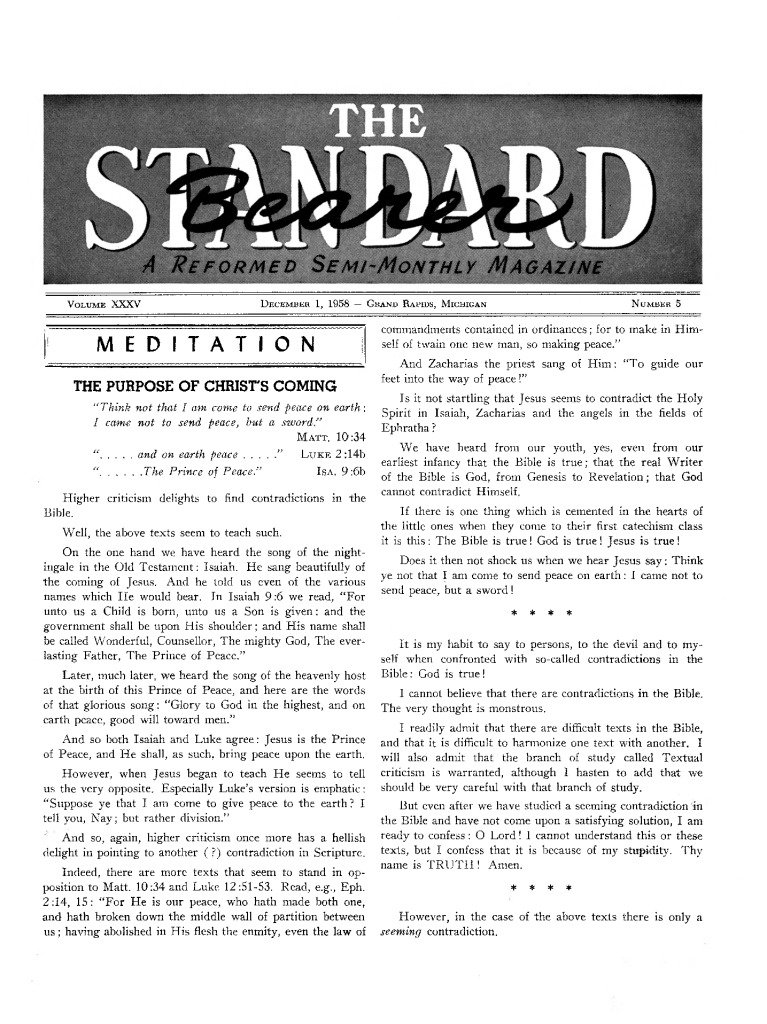