3. Then came the word of the Lord by Haggai the prophet, saying,

4. Is it time for you, O ye, to dwell in your cieled houses, and this house lie waste?

That the Israelites to whom Haggai preached showed more concern for their own homes than for the house of God is not just an old problem. All too often God’s people seem to be concerned only for their own homes and families in their finances, in the use of their time, in their goals, and in their efforts. They have time for everything but the work of the church, so much so sometimes that it is difficult to find men to serve in the offices of the church and to take the lead in building up the church. They can afford everything but the church budget. Recreations and holidays take priority over worship. Work and other responsibilities keep members from the Bible studies and other meetings of the church. Membership is considered of very little importance, and even where Christians are members of a church, their membership involves very little commitment to God, to His Word, or to the work of the church. We, too, live in ceiled houses while God’s house lies waste.

Men are always prone to put religion off with scraps and leavings, and serve God with what costs them nothing. In the outward things of religion they are much more disposed to work for themselves than for God; and if they have time that cannot be otherwise used, or funds that are not very current, to give them to the treasury of the lord, and if any larger expenditure of either is urged, to plead that “the time has not come” to do this work. In the inward things of religion the same spirit is shown. The young, the middle aged and the old, all alike procrastinate the great work, on the plea that “the time has not come,” the convenient season that, like the horizon, recedes as we advance.1

The result is that the church institute is broken down and ruined as the temple was in Haggai’s times. Preaching, sacraments, and discipline are all but vanished. Worship is seldom carried on in obedience to God’s Word. The members, instead of being built up, have their faith undermined and weakened. The church finally is hardly recognizable as the church that was instituted by Christ and, if not entirely ruined, resembles more an entertainment facility of some sort, a club, or a social services agency.

The lament of Psalm 74 is as true today as in the Old Testament:

Remember Thy inheritance, Thy church redeemed by grace;

And see the ruin foes have wrought within Thy holy place.

Amid Thy courts are lifted high the standards of the foe,

And impious hands with axe and fire have laid Thy temple low.

They have profaned the holy place where Thou hast set Thy Name,

The sanctuaries of our God are given to the flame.

We see no signs of power divine, no prophet speaks for Thee,

All this does not mean we should have no concern for our own houses, whether the building or the lives that are lived there, but God insists that His house is more important than ours and that we can be blessed in ours only when our first concern is for His. That may appear to be very selfish of God and show a lack of love for us, but it really is not so. God’s own glory and honor are the most important things and ought to be most important to us, not the least because we cannot be blessed apart from Him. Knowing His own glory and our need for Him, He insists that His house must be built and must be more important to us than our own houses.

6. Ye have sown much, and bring in little; ye eat, but ye have not enough; ye drink, but ye are not filled with drink; ye clothe you, but there is none warm; and he that earneth wages earneth wages to put it into a bag with holes.

Having pointed out and rebuked the sins of Judah, God now calls them to self-examination and repentance. He wishes them to see that their ways are sinful and displeasing to Him and to do that by acknowledging their sin and turning from it. It should be clear that though God does not explicitly call for repentance, that is what He has in mind. There is no value in considering our ways if that does not lead us to turn to ways that are pleasing to God. It is much the same with God as with an earthly father, who says to his child, “Look what you’ve done.” He means, “Do you not see that you have done wrong and that you must acknowledge and turn from your wrong-doing?”

We should note, too, that dealing with our sins always involves a consideration of our ways and a turning from the old ways of sin into the ways of life and peace. The person who only says he is sorry for sin and does not consider his ways, but goes on in them, has not truly repented of his sins. This becomes abundantly clear from verses 6 and 7, where God does call Judah to new ways of obedience.

But this call for repentance and conversion is addressed not only to Judah but to us. If we have neglected the house of God, the church, or have shown the same lack of care for the church as the place of God’s covenant, we, too, must consider our ways and turn from whatever evil we have done. We must consider our ways also so that we see that Judah’s sins are ours and that God is speaking to us as well as to them. If we do not, we are as blind and ignorant as they were before this Word of God came to them.

God enforces that call to self-examination and repentance by telling Judah that He had been punishing them for their sins, though they had not been aware of it. Among the troubles they had suffered were famine, crop-failure, bad weather, drought, and disease (cf. also 1:10, 11 and 2:17). These troubles had come from God as chastisement for their sin. Not all their problems, therefore, could be blamed on their enemies or on the decree of Artaxerxes. God is making sure that they recognize these judgments, not as an excuse for not continuing with the work of rebuilding, but as punishment for their failure to rebuild.

God speaks of the fact that their crops had been small, so that no one had enough to eat and drink or even sufficient for clothing. All these things had been threatened in Deuteronomy as punishment for disobedience—poor crops in Deuteronomy 28:38, lack of food in Deuteronomy 8:10, and insufficient clothing inDeuteronomy 10:18. Under these judgments it had been as though everything they earned was put in a bag full of holes. And so it is always. Those who will not obey God cannot be and are not blessed and do not prosper.

We believe that in the Old Testament this was far more true than in the New Testament. God made it clear to Israel that prosperity inthe land of Canaan was an evidence of His good-pleasure, and that drought and enemies were signs of His displeasure. Even in the Old Testament, however, this was not true absolutely. The book of Job is a lengthy lesson otherwise. In the Old Testament, therefore, prosperity was a sign of God’s blessing nationally, but not individually. Nor in times of prosperity did that prosperity mean that everyone in the nation was blessed by God. There were even times when God sent enemies and other troubles for reasons of His own and not because the nation as a whole was living wickedly. The people of God, therefore, needed the prophets and the Word of God to interpret their circumstances and to tell them that God was pleased or displeased with them.

What was true individually in the Old Testament continues to be true in the New. Prosperity or the lack of it cannot be interpreted as signs of God’s favorable or unfavorable attitude. God can, as Psalm 73 so clearly teaches, send prosperity as a curse, or send evil things for our good, so that all things work together for good to those who love God (Rom. 8:28). There is no common grace or favor

It should be added, however, that we often feel that God is displeased with us when we are not living in obedience to God and when He, in those circumstances, sends trouble and grief into our lives. It is equally possible, however, that, walking in sinful ways, we have all we want and prosper in our wickedness. That is not proof of God’s blessing but that God is setting us in slippery places (Ps. 73:18) or filling our mouths while He sends leanness in our souls (Ps. 106:15).

As far as the nation is concerned, the only nation of God that now exists is a spiritual nation, the church. No earthly nation, not the USA, not Scotland, not the Netherlands, can claim to stand in the favored position that Israel had in the Old Testament, and even Israel in its favored position was a type and foreshadowing of the church, as we have seen. That the church is that favored nation is taught in I Peter 2:9:

But ye are a chosen generation, a royal priesthood, an holy nation, a peculiar people; that ye should show forth the praises of him who hath called you out of darkness into his marvellous light.

The prosperity that God gives His church when she is faithful and obedient is not crops and good weather and freedom from hunger and disease, but spiritual prosperity. The wealthiest church is not necessarily the church that is being blessed by God, but the church in which the members are enjoying all the riches of God’s grace and salvation. When the church is not prospering spiritually, when the people of God go spiritually hungry and thirsty, and when they are like the church of Laodicea, spiritually poor and blind and naked, then they may certainly conclude that there is something desperately wrong and that they must consider their ways. 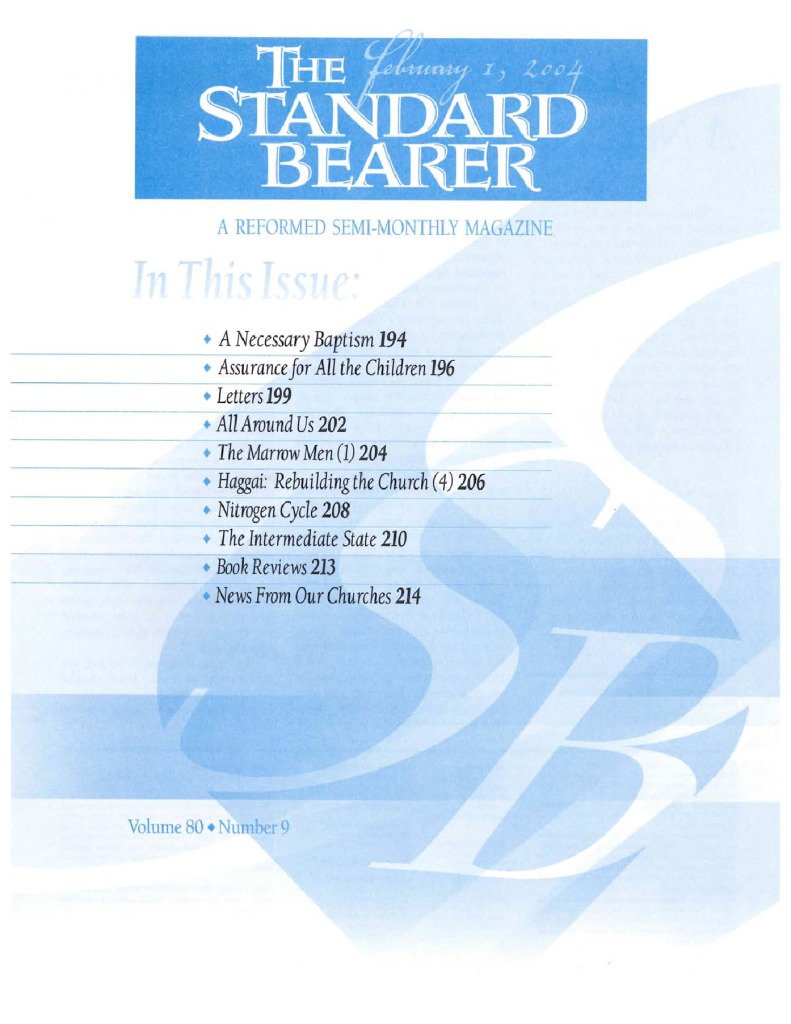