Hagar and Ishmael not in the Covenant

Hagar and Ishmael not in the Covenant

In the process of time, in the last year, much attention was given in The Standard Bearer in regard to Hagar and Ishmael.

The Rev. B. Woudenberg wrote on this subject under the theme: “A Cloud of Witnesses,” and Rev. R.C. Harbach wrote two articles under “Contributions”; and as I look at these two views, they differ as much as light and darkness, blessings and cursings, to be a covenant friend of Jehovah, or a friend of the Prince of darkness.

Now, as a common uneducated man, permit me, Dear Editor, to present also my view; not as if it should lay any weight in the balance, but to bring to light that we as common men do a little thinking of ourselves and leave it not altogether to preachers and thinkers in dogmatics; and no one will blame us for this: I am sure of that.

As you have noticed: I do not agree with those who give Hagar and Ishmael a place with the elect of God, for it is my contention that you ever can deduct from the pages of Holy Writ this to be the truth.

We must not make the mistake to quote Scripture out of its connection, or quote texts at random to prove our point. The text must be explained in the context, and brought in harmony with the whole of Scripture. We may not reason (as is done frequently) reverting now to the subject we treat: God blesses the elect only, consequently Hagar and Ishmael are elect people of God. You know: By faith Isaac blessed Jacob and Esau, but we know that the covenant blessing rested only upon Jacob, and Esau received what was left, namely the corn and the wine, earthly prosperity; and to my mind this is all that Ishmael ever received in accordance with Gen. 17:20. I for one can not gather from Scripture that Ishmael was blessed with the spiritual blessing of his father Abraham as the father of all believers. In Gen. 16:12 he is pictured as a wild ass among men, and in Job 39:5-8 we hear the same language: Whose house I have made the wilderness, and the barren land his dwellings. His hand will be against every man, and every man’s hand against him; which means that he was a quarrelsome person, and did not have the meek spirit of Moses the Mediator of the Old Testament. In the wilderness he cried, but it was not the cry of repentance but only the cry of despair. Later on we see him as he really is: Gen. 21:9. And Sarah saw the son of Hagar, at the great feast where Isaac was weaned, mocking. And remember: this mocking was not a child-like sport, but a deep-rooted, bitter, sinful act which is to be expected of this wild ass. He sneered with a devilish sneer, for his carnal mind had no eye for the reality that in this wonder child the salvation of all the elect was promised in the generations to come; again a fact that he has no part in the promise, for he hated the true God of Israel.

Neither did Hagar have grace in her immortal soul, for she broke loose from her mistress, whom she supposedly loved. If we do not love the people of God we cannot love God. However, the Lord told her: return to thy mistress and submit thyself under her hands.

And as the two fugitives were cast out by Abraham at the command of God, they traveled in the direction of Egypt, Hagar’s country, through the wilderness of Paran, and in Paran they made their home. And at the time Ishmael was ready for marriage Hagar took him a wife, not of friends from Abraham and Sarah; but out of Egypt; and Scripture does not inform us that they ever turned back. And how could it be otherwise; they were excommunicated, and never repented.

Galatians 4 also speaks of the two sons of Abraham, the son of the bondmaid and of the freewoman. Here Paul speaks to the Church of Galatia, but also to the Church of all ages, and warns, not to seek salvation by works, for it can only be obtained by grace for it is the gift of God, lest any one should boast. He who seeks salvation by the works of the law is condemned and will be cast out.

Isaac was a wonder child. He came into this world as life from the dead. He was born through the power of the promise, and he represents the whole elect church, the true spiritual seed of Abraham, as they are chosen, redeemed, and saved in Christ.

Ishmael is a type of the whole carnal reprobate seed that always is opposed, and persecutes the Church of the living God in the midst of this world. He was born outside of the promise.

Do you still believe that Ishmael was a child of God?

I can not find it in the Word of God. And I refuse to believe that Jehovah, the Triune Covenant God of His elect people, made the mistake, that He chose one of His children to be a type of the carnal race, the seed of the serpent. God is God. 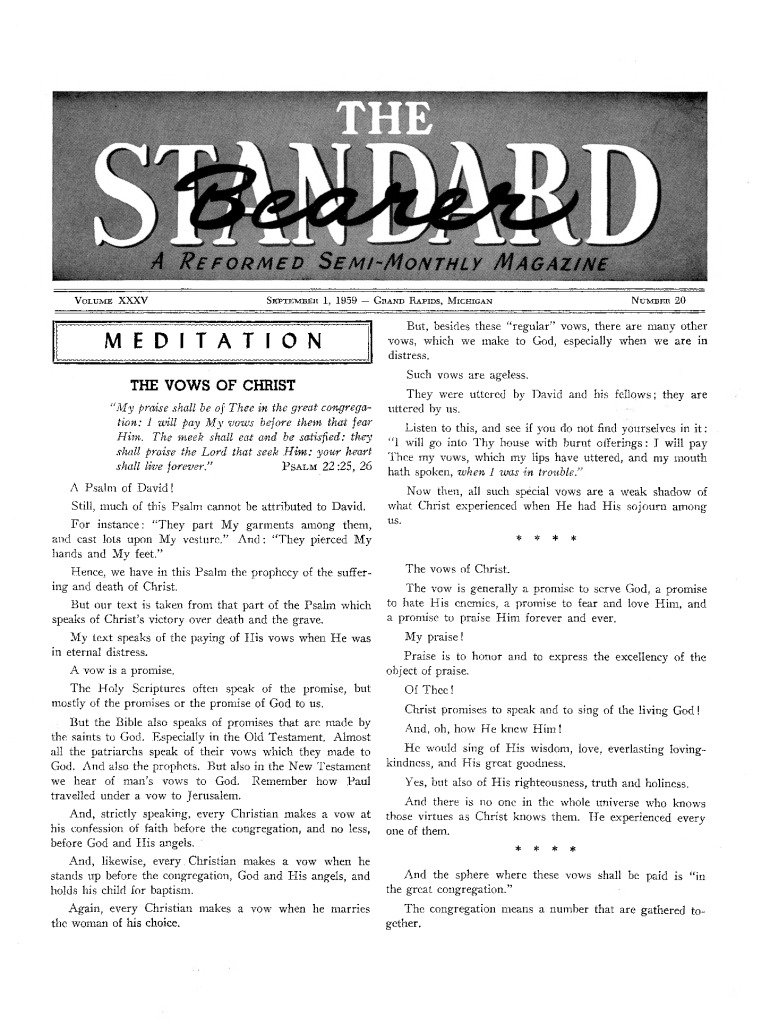