I cannot afford it.

Those words pass so readily over our lips. Almost every day we are confronted with buying something, indulging in some luxury, enjoying some pleasure; and each time the question must be answered: Can we afford it? Children hear their parents say in almost wearisome monotony: We cannot afford it, forget it. Often parents and children can differ violently on the question whether or not the family can afford this or that.

It becomes a matter of values. What is essential for my daily existence? When I pray for my daily bread, what do I include in that long list of daily needs? When I realize that all that I am and all that I have comes from the Lord and belongs to Him, it becomes a question of: What does the Lord require of me? How does He want me to use His gifts?

Actually it is all much more serious than that. It is a question of Christian stewardship, using the means God has entrusted to us in His fear and to His glory. God has given us knowledge and wisdom, gifts and talents, even all our possessions down to our dollars and cents, not to use for our own selfish interests, but for the glory of His Name. So readily we forget the admonition of the apostle Paul, “Whether therefore ye eat, or drink, or whatsoever ye do, do it all to the glory of God.”

And so I pause a moment to consider: When I woke this morning, was my first thought of God, and my first conscious act a prayer? Did I eat my breakfast consciously seeking the glory of God? And how about that telephone conversation I just had? My friend did not give me the impression that God was foremost in his thoughts, but neither did I give him that impression, even though our conversation centered about the church. And then I think about the many things I do all day long, the many things I say, the making of sermons, my Sunday worship, and last but not least, my prayers. Am I a good steward in God’s house? When I appear before God to give an account of my stewardship, will I be weighed in the balance and found wanting? No, at the moment I am not even thinking of the sins that I am aware of and confess from day to day. What bothers me is more like a secret sin, because I am so little burdened by it. It is my failure to be a good steward, my failure to use the gifts and means entrusted to me only to the glory of God and the coming of His kingdom.

And so my mind wanders to those masses of people who live in complete involvement of sin. They cannot afford what might well be considered the barest necessities of life, a decent home, respectable furniture, a dependable car to drive to work, and the like. They have their beers, their liquors, their TV set, but as for the rest they are content to struggle along. If you were to ask them, I suppose they would tell you that they cannot afford a better home, better furniture, and all that.

And then there are others who do have a beautiful home with modern furniture and every conceivable convenience. They have their cars, their camper, their boat, and many other necessities for enjoying their leisure time with their children. They might seem to be among those who “have everything.” Yet, no doubt, they also say of one thing or another: “I cannot afford it.”

As children we were taught that the kingdom of heaven comes first in our thoughts and in our giving. We were constantly reminded that we had to give of our small earnings or allotments to the church and to kingdom causes. As we eyed our small handful of coins with visions dancing through our heads of some dainties or of a bike, we were told not to be selfish. Yet how soon we forget.

That brings me almost unawares to the parable of the Rich Man and Lazarus. The rich man was a member of the church and proud of his prominent position in it, which certainly no one dared to challenge. How freely he referred to Abraham as his father. Even in hell he still made an appeal to father Abraham to send him a bit of relief in his misery. He was rich, and proud of his riches. He dressed like a king in purple. He carefully chose his fine linens. Why should he not insist on the best? He could afford it, and he had worked hard for it. In his stately mansion only choice foods and wines were served to satisfy his ravenous appetite. By his own right he was a connoisseur of the most delectable foods and liquors. One thing he did enjoy, and that was his meals.

But there was that Lazarus that someone had deposited at his gate, without even consulting him. Well, he could lie there as far as Dives was concerned. It was a shame that the priests neglected their poor, and that the city fathers were not more concerned about ecology in the Holy City. But if others allowed such rubbish on the streets, why should he be bothered? That Lazarus with his ugly, ulcerous sores! It made him shudder to think of touching him.

And then those dogs that were attracted by the foul smell of this beggar! At least, they licked the poor man’s sores. But why must that Lazarus be placed in front of the rich man’s house? Must rich men have their pleasant life disturbed by a beggar who cries for crumbs?

Then the day came that the beggar was delivered from his misery. Who would have thought that Lazarus had a stewardship to fulfill? And he who bore the beautiful name “God is my Helper” had even fulfilled that stewardship amid all his poverty and misery! No, I do not know how he did it, but he did. Just imagine. When he died God sent an escort of angels to give him a hearth welcome into Father’s House, where a mansion awaited him. Carefully these angels laid their charge in Abraham’s bosom.

And the rich man died also. He could not linger to enjoy the eulogies and pomp of his fine funeral. His soul hastened on, and in the next moment of consciousness he opened his eyes to torment. Still worse, those tear-stained eyes looked about and focused upon—Lazarus. There was that same beggar of the street, but now enjoying the bounties of the heavenly wedding feast, reclining right next to Abraham. Suddenly the “rich man” became a beggar, pleading for a drop of water to quench his thirst, just as poor Lazarus had begged for a crumb of bread. But he who showed no mercy receives no mercy. God is just. To him come those accusing, condemning words: “Son, remember!” Let him but remember the things he had set his heart on, which he deemed so essential for his happiness. Let him realize what he had done with God’s gifts; how he had failed in his stewardship. Eternity is a long time to chew one’s tongue in remorse under the righteous judgment of God.

And so I got to thinking about kingdom causes. There are not so many Lazaruses lying at our gate at present, at least not in that physical form. But we do manage to find a number of income tax reductions each year. And we do know our obligations to the church and to kingdom causes. Many churches have a high budget. Many families are burdened with high tuition for the instruction of their children. These obligations often force us to forego some desired luxury. And the last synod also made some far-reaching decisions. The delegates felt as good stewards in the house of God that our churches should call another missionary, call a third professor for the seminary, and work toward a new seminary building. They felt that in times like these we must not hide our light under the bushel, but proclaim wherever possible the truth our Sovereign God has entrusted to us. We must properly train our pre-seminary and seminary students, if we are to have ministers that can properly serve our churches in the future. And they did not consider a new seminary building a luxury.

Also for us it becomes a matter of good stewardship. And therefore voices already are heard: Can we afford it? Good stewardship requires that we ask ourselves whether this is to the glory of God, for the extension of His kingdom, and the ingathering of the church. Does it belong to your stewardship and mine? The question could also be turned about: “Can we afford not to have them?” 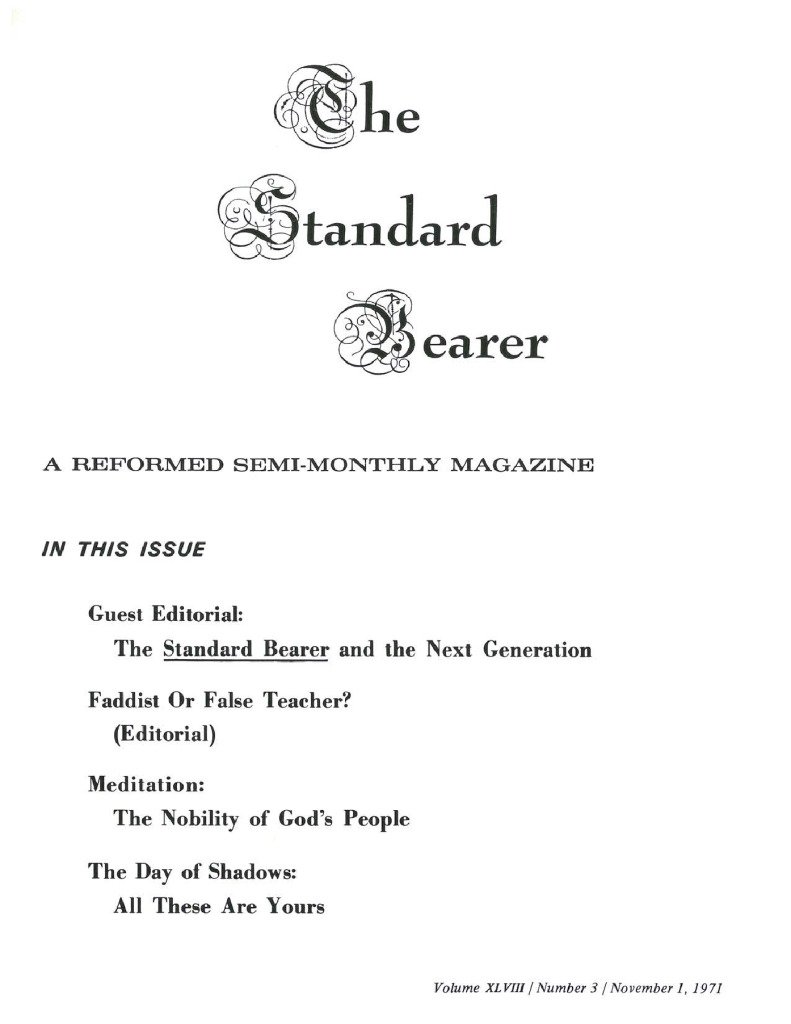