God’s will revealed to His friends

God’s will revealed to His friends

The next few articles in this rubric will be on God’s covenant. Lord willing, some of the subjects to be considered will be:

We begin by considering God’s covenant as friend­ship. This covenant communion involves God revealing to us mysteries that are not made known to others.

Proof that God’s covenant is a relationship of friendship

Now when I passed by thee, and looked upon thee, behold, thy time was the time of love; and I spread my skirt over thee, and covered thy nakedness: yea, I sware unto thee, and entered into a covenant with thee, saith the Lord GOD, and thou becamest mine (Ezek. 16:8).

Here God speaks of entering into a covenant with His people. He swears an oath and enters a covenant with them and they become His. We think here of the everlasting marriage that exists between Christ and the church. This is a beautiful marriage in which two are united not in a business partnership, as though the cov­enant were a contract, but in a relationship of intimate fellowship. Their fellowship is that of a husband and wife in which the bride says, “I am my beloved’s and my beloved is mine” (Song of Solomon 6:3).

These are just a few of the ways that we can show from Scripture that God’s covenant with His people in Christ is a relationship of friendship. In this article let us consider one of them in a bit more detail. I am re­ferring now to how covenant communion involves God revealing to His friends His secret will. We see that as we look at what God said to Noah and to Abraham.

God revealing His will to Noah and to Abraham

God said to Noah, “With thee will I establish my covenant,” and then He made known to Noah what He was going to do. It was to Noah and not to others that God made known His will. Not that Noah would have kept this revelation to himself. The point here is that covenant communion involves God revealing His will to those with whom He establishes His covenant. As a recipient of this gracious revelation, Noah knew that God loved him. He “found grace in the eyes of the Lord,” and he walked with God as His friend.

The same is true of Abraham. God loved Abraham, communed with him, and spoke with him about what was going to happen.

As to what God told Noah and Abraham, there is much similarity. He spoke to both of them about the destruction of the impenitent and His gracious salvation of them and of all those who are in Christ.

To both of them He spoke of His coming judgment. He told Noah about the flood that He would bring upon the earth. To Abraham God spoke about the de­struction of Sodom and Gomorrah, the smoke of which Abraham himself would see (Gen. 19:28). God also told him about His future judgments upon the wicked nation that would afflict Abraham’s seed, and upon the Canaanites whose land Abraham’s seed would inherit.

The just God who punishes the ungodly also prom­ised deliverance to Noah and to Abraham. He assured them that they and their generations would be blessed. During the flood Noah and his family would be pre­served in the ark. After the flood we read that God blessed Noah and his sons. Abraham was told that his seed would be a stranger in a land that was not theirs. They would serve them and be afflicted for four hun­dred years. God’s judgment would come upon that na­tion, and afterwards the children of Abraham would come out with much substance.

To both Noah and Abraham He promised blessings that would be purchased by Christ. After the flood Noah sacrificed and God “smelled a sweet savour” (Gen. 8:21). Noah’s sacrifice pointed to the coming sac­rifice of our Lord.

Then God spoke of His everlasting covenant with Noah and with all the earth, the covenant whose bless­ings would be purchased by that coming sacrifice of our Savior to which Noah’s sacrifice pointed. The blessings God promised Abraham would also be purchased by our Lord. God told Abraham that it was in his Seed that all the nations would be blessed (Gen. 22:18), and Galatians 3:16 tells us that Abraham’s one Seed is Jesus Christ.

God’s one, everlasting covenant of grace was estab­lished both with Noah and with Abraham. In both in­stances we see how God revealed His will to His friends. He spoke to them in distinction from others and assured them that they and their seed would be blessed in Christ Jesus our Lord.

God’s will revealed to His covenant people today

God’s covenant is particular. The revelation of His will is particular. God in and through Jesus Christ continues to make known to some His will concerning their salvation.

We sing of this in the Psalms: “The secret of the Lord is with them that fear him; and he will shew them his covenant” (Ps. 25:14).

God shows His covenant to us, His friends. He gra­ciously reveals unto us His secret will.

Henceforth I call you not servants; for the servant knoweth not what his lord doeth: but I have called you friends; for all things that I have heard of my Father I have made known unto you (John 15:15).

Jesus spoke of this on more than one occasion. When His disciples asked Him why He spoke in parables, He responded: “Because it is given unto you to know the mysteries of the kingdom of heaven, but to them it is not given” (Matt. 13:11b).

When praying to God our Lord said: “I thank thee,

O  Father, Lord of heaven and earth, because thou hast hid these things from the wise and prudent, and hast revealed them unto babes” (Matt. 11:25b).

Then He added: “All things are delivered unto me of my Father: and no man knoweth the Son, but the Father; neither knoweth any man the Father, save the Son, and he to whomsoever the Son will reveal him” (Matt. 11:27).

We, Christ’s disciples, have been taught by our Lord that His gracious revelation is particular. Our heavenly Father communes with us, telling us about His coming judgment and assuring us that we are safe in our Lord Jesus Christ. The proclamation of this gospel works in us faith. We trust in our God and come to Him for all that we need as we sojourn here below.

It is this fellowship of friends that characterizes God’s covenant.

May we glorify and praise Him as we walk with Him and fellowship with Him, just as our fathers Noah and Abraham did so many years ago. 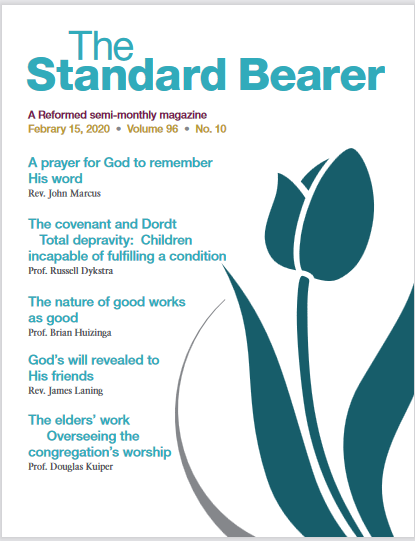