Nevertheless the foundation of God standeth sure, having this seal, The Lord knoweth them that are his. And, Let every one that nameth the name of Christ depart from iniquity. II Timothy 2:19

There are times in the history of the church and in the personal lives of God’s people when all seems hopeless. Times of persecution. Times of upheaval. Times of weakness. Times when it appears that the devil has the upper hand. Times when we wonder if our feet are about to slip. Our encouragement in the midst of those times must be that the foundation of God stands sure.

That was the inspired word to Timothy as he faced hardship and heresy in the church of Ephesus. Hymenaeus and Philetus denied the truth of the resurrection and led others astray with them. Apostasy was sure to lead to more ungodliness. But, no matter the opposition that Timothy faced. No matter the opposition that the church of Jesus Christ faces in every age. No matter what spiritual battles we face personally. The foundation of God stands sure.

A foundation, of course, is critical to the structure that is built upon it. Jesus told of the wise man who dug down until he found solid bedrock and laid the foundation of his house on it. When the storms came and the floods rose up against the house, it stood firm because of its foundation. The foolish man, on the other hand, did not care about the foundation. He found a nice-looking place and built on the shifting sand. When the floods came against his house, it fell with a great crash.

How much more critical to have a sure foundation when it comes to matters of eternity! How important for our comfort to know that the church of Jesus Christ is founded on solid ground. How important to know about our own salvation that the foundation of God stands sure.

When we see people falling away from the truth and from the church, we might wonder, “Do we have the truth after all? Can the church survive against all these onslaughts? Might I fall away too?”

To be sure, if our salvation and the existence of the true church rested on man-made foundations, we would have reason to worry. But thankfully, the foundation is laid by God Himself; it is called the foundation of God because He put it into place. He laid the bedrock and founded the superstructure of the church upon it. God’s foundation is solid and immovable. We confess with the psalmist, “The Lord is my rock, and my fortress, and my deliverer; my God, my strength, in whom I will trust” (Ps. 18:2).

What is this foundation of God?

The foundation is certainly not of man’s making. People of every sort build philosophies that serve as pseudo-foundations for their lives and practices. They may appear ever so solid and immovable. But history has proven again and again that the foundations of men are always shifting. Hymenaeus and Philetus were perhaps influenced by the Gnostic philosophy that matter was evil and the spiritual good. The “me first” of Hedonism proves empty when pleasure fails to satisfy.

We could translate the passage, “The firm foundation of God is standing” to express the idea that God’s foundation was, and is, and ever will be standing. It will never be moved because God Himself can never change. “For I am the Lord, I change not; therefore ye sons of Jacob are not consumed” (Mal. 3:6). His promises are forever sure! His purposes can never fail!

What a comfort in the midst of this changeable world we call a valley of tears! What a comfort when our enemies assail us on every front!

What foundation forms the basis for the church’s existence and the salvation of each child of God? The unchangeable counsel of God as it stands in Jesus Christ. The foundation of God is His eternal decree to elect us in Christ before the world was created. Christ is the elect one. He is the chief Cornerstone that determines the rest of the foundation and structure of the temple.

That Christ is central to the foundation is indicated in the two statements that follow in the text. First, “The Lord knoweth them that are his.” Jesus Christ, the Lord, knows His sheep. Secondly, “Let every one that nameth the name of Christ depart from iniquity.” The foundation is nothing without Jesus Christ.

Not only does the foundation of God include His eternal decree of election, it also includes the working out of that decree in history. When Jesus Christ regenerates us and dwells in our hearts through His Spirit, He establishes a firm foundation that can never be moved. Whoever has this saving work will never go lost. When God pours out His love in our hearts, He never takes it back (cf. Rom. 11:29).

It is true that false teachers will arise in the church. They will deny cardinal doctrines in the attempt to demolish the hope of the gospel. Some will deny the resurrection of the body, as did Hymenaeus and Philetus. Others will deny salvation by grace alone through faith alone apart from any merit or conditions to meet. They will make men the deciding factor in salvation, as do the teachers of the federal vision heresy. These false teachers will lead many astray so that they deny the gospel.

Be that as it may, we must never imagine that the foundation of God is cracking or sinking. We must never imagine that false teachers and heresies hatched in hell itself can make even the smallest chip in God’s firm foundation. “And whosoever shall fall on this stone shall be broken: but on whomsoever it shall fall, it will grind him to powder” (Matt. 21:44). False teachers and falling away only shows that there will always be hypocrites who have attached themselves to the church but who have nothing to do with the foundation of God’s saving work. They were not chosen in eternity, nor were they regenerated by the Spirit of Christ.

The work that Jesus began in us, He will certainly bring to completion. If He laid the foundation, He will finish the building. If Christ loved us and died for us when we were yet sinners (cf. Rom. 5:8), surely He will not forsake us when we stumble in weakness. “God is not a man, that he should lie; neither the son of man, that he should repent: hath he said, and shall he not do it? Or hath he spoken, and shall he not make it good?” (Num. 23:19).

To encourage us even more, the apostle describes a twofold seal that is inscribed, as it were, on God’s sure foundation: “Nevertheless the foundation of God standeth sure, having this seal, The Lord knoweth them that are his. And, Let every one that nameth the name of Christ depart from iniquity.”

On one side of the seal is inscribed God’s knowledge of His people: “The Lord knoweth them that are his.”

If Jesus Christ bought us with His precious blood, then He truly is the Lord who owns us body and soul. He knows us better than we can know ourselves. He knows we are sinners. He knows we struggle with besetting sins. He knows we are far from perfect. He knows how we rejected Him in Adam. But His love is unchanging, and there is nothing that can separate us from that love. That He knows us now means He will know us also on the judgment day. He will say to us and all who are His, “Come, ye blessed of my Father, inherit the kingdom prepared for you from the foundation of the world” (Matt. 25:34).

On the other side of God’s confirming seal is our duty to depart from sin: “Let every one that nameth the name of Christ depart from iniquity.”

This is why the text admonishes us, “Let every one that nameth the name of Christ depart from iniquity.” God calls us to withdraw from unrighteousness and wickedness with urgency. The purpose is not that we constantly measure our failures and doubt the sure foundation of God. Not to make us boast in ourselves, as if we departed from iniquity in our own strength. But so that we see in ourselves a small beginning of departing from iniquity, which sincere departing could only be the result of Christ’s work in us.

If we name the name of Christ, professing to belong to Him body and soul, professing to love Him who first loved us, looking to Him for all of our salvation, then it follows that we will want to depart from iniquity. Although we fall short in our fight against sin, by God’s preserving grace we continue to battle against sin, not giving up. As often as we fall, we look to Jesus to forgive us and pick us up to continue in the battle.

He is faithful. He will hold us in His right hand so that none can snatch us away. Blessed be the name of the Lord!

His foundation stands sure!

The chief cornerstone of this sure foundation is Jesus Christ. All of God’s counsel and revelation centers itself in Jesus Christ. “He is before all things and by him all things consist” (Col. 1:17). What a glorious comfort for the church to know that this firm foundation will ever stand! 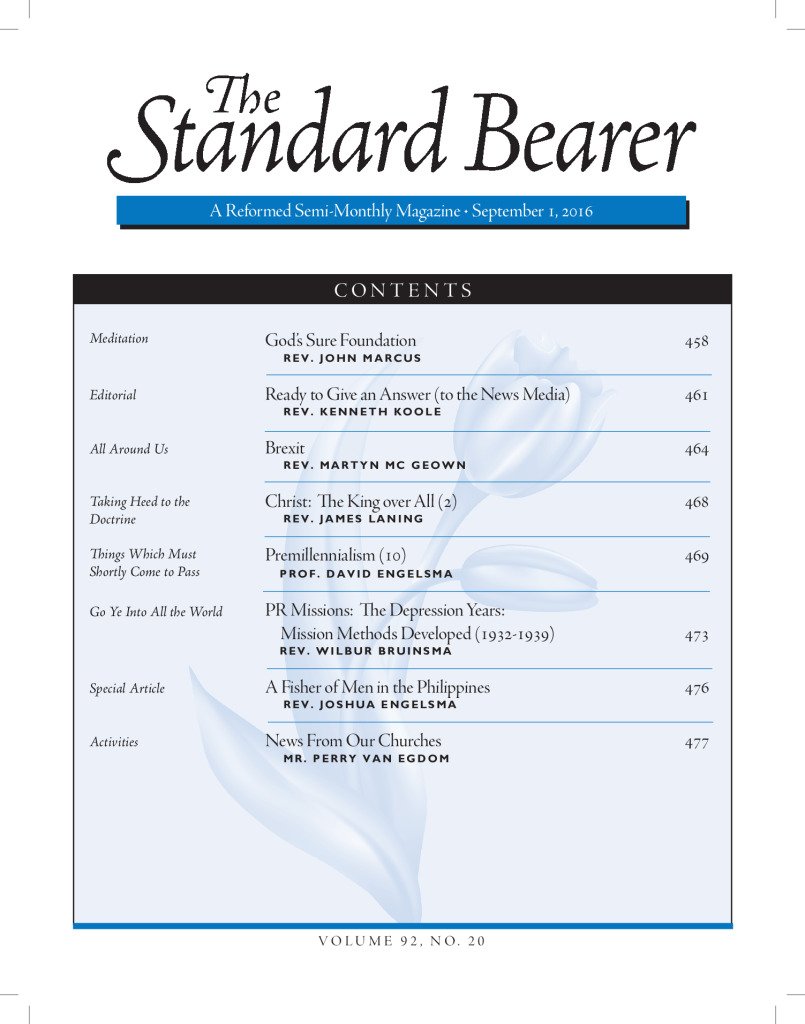