For I am the Lord, I change not; therefore ye sons of Jacob are not consumed. Malachi 3:6

God’s abiding covenant faithfulness is set forth in our text. How appropriate to remember this when we consider the fact that with this issue of the Standard Bearer we begin our 90th year of publi­cation. This can only be attributed to our Lord, who is unchanging in His faithfulness to His people.

We know that time and changes are ever busy. All things have a beginning and an ending. Things grow and develop, then fade and decay as the flower in the field. The sun rises and sets; the seasons change from spring to summer to autumn to winter.

That is true also of man. One begins as a babe, ma­tures to adulthood, then on to old age and finally death. This also happens in our spiritual life. What we love today we despise tomorrow. There is nothing abiding and stable in the creature. There is nothing among cre­ated things that man can cling to for refuge. Irresistibly he is carried on in time’s streams until it bears him into eternity’s ocean. We are reminded of this when we go from volume 89 to volume 90.

The question is: Is there nothing that is abiding forever. The answer is: “I am the Lord, I change not; therefore ye sons of Jacob are not consumed.”

Indeed, we have an unchangeable God. We see that in His name. He is Jehovah, as indicated by the name Lord in all capital letters as we have it in the King James Version of our Bible. It means “I AM THAT I AM,” as seen in Exodus 3:14. It reveals the essence of God. It implies, I am now, I am yesterday, I am from the extreme past to eternity, I am forever, therefore the unchangeable. His being is not subject to the changes of our nature, nor to the changes of time or that which is in time. There never was a moment when He was not. He is not a child of time. He never was young and never will grow old. There is no increase or decrease in His power or in any of His attributes. His heart is an ever-flowing and never-exhausted fountain of love. He is the one continuously living being, never beginning, always being, never ending, always abiding. He is the everlasting God. Jehovah is His name.

As He is in Himself, so He is toward His people. He has an unchangeable love to His elect people. He loved

them from eternity, even before the foundations of the earth were laid. He is the one sure foundation upon which the children of Jacob may build. He is the one rock to which they may cling and upon which they may dwell as their everlasting abode. Jehovah is His covenant name, which reveals a covenant relation. He is their everlasting Friend and Savior, and they are His friends and servants as beloved children and heirs. He reveals to His children that His love is not borne away by the streams of time, but is unchangeable and everlasting as He is Himself.

The origin of this love is not in the children of Ja­cob, nor from time’s fountain, nor from anything that belongs to us poor creatures, but from the deep and un­fathomable fountain of eternity, God Himself. We see it when He sends His Son to be born into this world and take on flesh. The greatest manifestation of this love we see when Christ suffers and dies on the cross, only to be raised again on the third day, thus lifting His children into everlasting exaltation. On and on flows His love until His purpose is accomplished in Christ and all His children have arrived in everlasting glory.

Therefore His people are an ever-abiding people. We see this first in the old dispensation. The un­changeableness of Jehovah is the key to the solution of an otherwise insoluble problem. The problem is that the children of Jacob are not consumed. All things fade and die and lose their beauty. All that is called creature passes away and is consumed. But whatever else changes, decays, and disappears, the children of Jacob abide forever.

The marvel is that there are so many reasons why they should be immediately consumed. They were not swallowed up in the oppression of a strange land under hard labor and when their children were choked to death as soon as they saw light. They passed through the Red Sea, in which their enemies perished. They went into the wilderness with no food and water and were surrounded by enemies that sought their destruc­tion. They were not consumed by the wrath of God when they turned away from Him and sought other gods. Always there remained a remnant according to the election of grace, no matter how fiercely the fires of God’s wrath burned.

This is also true in the new dispensation. The church is not consumed by attacks from without. She is the object of envy and hatred. Scaffolds were erected to kill her children, prisons were built to swallow them up, and fires were kindled to burn them to death. The world rages in fury to destroy the church, the children of Jacob, but they are never consumed.

This is true not only for the church as a whole but for us individually as well. We look at ourselves and we see sins and transgressions, and we behold the foul fountain of our heart and mind. We see our repeated apostasy from Jehovah and our iniquities without number, which daily witness against us. Then we place this alongside of the light of God’s holiness and righteousness and remember that our God is a consuming fire. Then it is a mystery that we were not long ago consumed by the fire of God’s wrath. How can we possibly understand this mystery of mysteries?

The answer is that we have a sure foundation, which is the cross of Jesus Christ our Lord. At the foot of the cross we must contemplate God’s everlasting love, which is unchangeable. We must remember that the love that erected that cross for His only begotten Son flows from an everlasting and unchangeable God. Then we are able to understand, in the light of Scripture, why we have not been swept away and utterly consumed. It is because we have to do with the unchangeable love of God, with a faithfulness that never departs from His promise, with an immutable purpose to bless us that will not be turned aside.

We must look at the cross, and over that cross to that love. We must look forward and notice that He who bore all our sins on the accursed tree was not con­sumed, but was revealed in all His power and glory in the resurrection. From that cross and resurrection we look forward, though weak and sinful we be, yet trusting in that unchanging love, and believing that we will never be consumed.

We must cling to the Rock amid the floods of sin that may pass over our souls, in the midst of hateful enemies that may wish for and plot our destruction, and threat­ened by the wiles of a roaring devil. Clinging to the Rock, we believe that we shall never be consumed, and know that we shall presently pass into the darkness of death and the grave. We still cling to Him who is the immu­table One, and we believe that when the earthly house of this tabernacle shall be dissolved, we have a house with God, not made with hands, eternal in the heavens.

Finally, when the end of all things is come, when the world shall pass away and all the elements shall melt in a fervent heat, then we shall be confident that we shall not be consumed, for He is our Rock and our Security forever. Our trust is in Jehovah, the immutable Jehovah. With this truth we face the coming of the future, in which trust we begin this 90th volume. For us there is no greater comfort, joy, and strength possible. 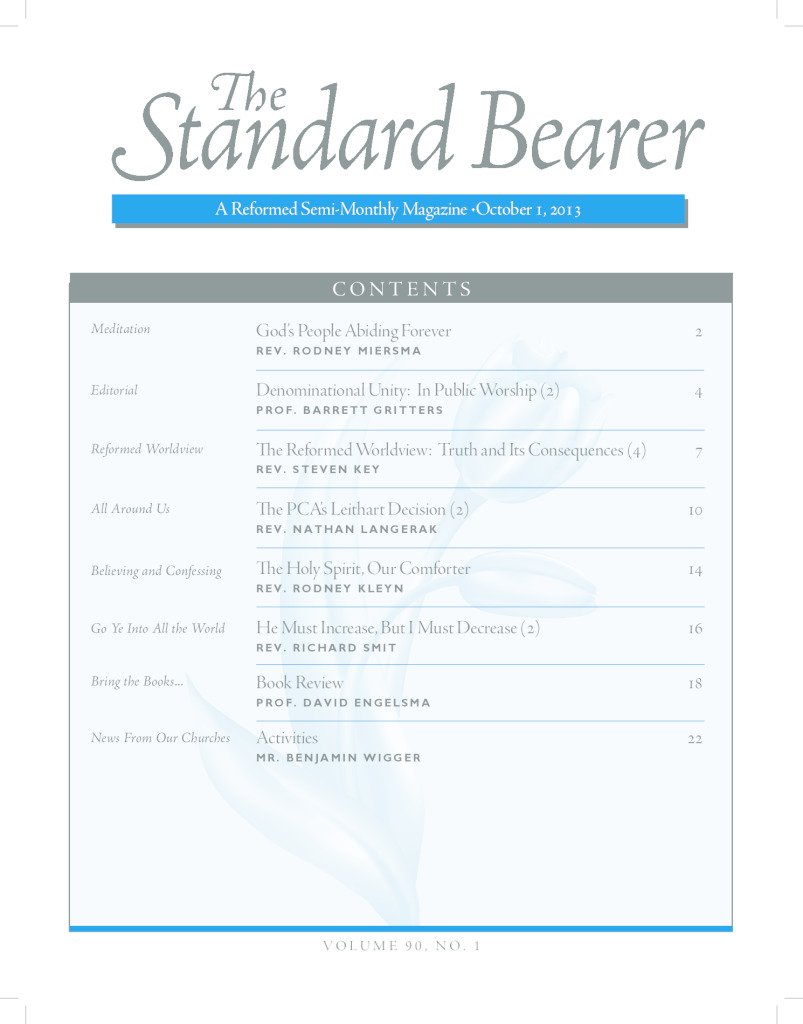