God in this passage of the divine Word declares His own essential attribute of immutability and glories in it. Negatively, this means God is perpetually changeless; positively, He is ever the same. The verse begins with the preposition for, stating the reason for that just previously expressed (in v. 5). Here the Lord shows that He is both Judge of and Witness against evil-doers. Specifically, He identifies these impenitent sinners as sorcerers (dealers in the occult, astrology, witchcraft, and the drug traffic), adulterers (cp. the modern sex rebellion), false swearers (perjurers), oppressors. The latter include crooked politicians who get into office by perjury, lies, and deceit. When once in office, they, through their sorceries and adulteries, enslave the people who are then much easier to handle, to defraud, rob, and oppress. But God will testify against, judge, sentence, and punish these criminals. For He is Jehovah, the eternal, self-existent God who never changes, immutable in His being, justice, goodness and truth. He is just as much the Enemy of sin as He ever was, and evildoers, in time and in eternity, always find Him so. The Judge of all the earth needs no new legislation passed in order to save the poor and oppressed. For His law and the judgments rendered on the basis of it are never antiquated, never out of date. They continue relevant and in full force. So also the curse of His law continues in its power against all lawbreakers. God is an immutable Judge and Witness against them. “I am the Lord,” the unchangeable, covenant God, faithful to His covenant, “therefore ye sons of Jacob are not consumed.” Sons of Jacob are true believers, the sons of God’s election, but so unworthy because they all have the deceitful nature of Jacob. Yet, because of the immutable love of God, manifested in the blood of the cross which washes away all their sins, they are not consumed.

“I change not!” The speaker, it is to be noted, is, from the first verse, the promised Messiah, “the Lord Whom ye seek,” “the Messenger of the covenant”—another biblical proof of the Deity of the immutable Christ. This is “Jesus Christ the same yesterday, and today, and for ever” (Heb. 13:8). It is also to be noted that the verb “to be,” am, is in italic, indicating that it is not in the original. Therefore Jehovah is not the predicate of the sentence, but in apposition with the subject, I, and Jehovah the immutable Messiah stands in contrast to the changing sons of Jacob.

God is immutable in all His perfections, in His omniscience, omnipotence, omnipresence, holiness, righteousness, knowledge, goodness, and mercy. He is immutable in His counsel, decree, purposes and plans, and in His love, covenant, and promises. The changeless God created, sustains, and governs all change (including revelation, incarnation, and redemption), yet without Himself changing. So the words, “In the beginning God created” (Gen. 1:1) do not imply any change in Him. Nor does “My Father worketh hitherto” (John 5:17); nor does He “worketh all things according to the counsel of His own will” (Eph. 1:11). This means that God’s power is always the same. He gets neither weaker nor stronger. His power is never exhausted nor ever in need of renewal. His knowledge is not increased as with His intelligent creatures. His mind is not a sieve, but retentive of all things in eternity, in past, present, and future, in one divine thought. He is the unchanging, overflowing Fountain of all good, ever ceaselessly pouring out His goodness on His creatures in an abundant, unabated, steady stream continually the same. He never can change from holiness to sin, nor from righteousness to wickedness. His counsel is immutable (Heb. 6:17). His purposes none can frustrate nor annul. He never changes His mind; never has to, since His thoughts and counsels are eternally perfect. He changes His providences, yet they are all ordained and brought to pass according to His unchangeable will.

So immutability belongs to all God’s attributes. Just as all the colors of the spectrum flow forth from their center in the light, so the attributes of God (all one in Him!) have their center in the sun of immutability. God’s mercy could never change. (What could it change to and still be a divine attribute? and not degenerate?) How could His holiness change? This is to ask, How could God cease being God? His being and His perfections are the same. He is His attributes! Of every one of them we may sing, “As it was in the beginning, is now, and ever shall be, world without end. Amen!”

Only the Lord God can say in truth, “I am that which I am.” Methuselah, who lived for 969 years, could not say this for one quarter of an hour. For the creature must confess, I am not what I was just a moment ago. I am this very instant undergoing change. In the future I will not be what I am now. Only God is the immutable I Am! God could not remain God and say anything else! It would be Barthian nonsense to make God say, “I AM that I am, yet at the same time I am something other than that.” We cannot say in modern parlance, “God is ‘something else.'” (Like what? Isa. 40:25a). God cannot be one thing one time and “something else” another time. “He is the living God, steadfast forever” (Dan. 6:26). God is! God is Himself. God is God! If He were not always God He could never be God.

Immutability is therefore not a quality which may be considered in itself, apart from other things, as though, in some sense it may be considered even apart from God. It is said that because the reprobate in hell are in the miserable state of immutable malice against God, and the elect in heaven in a state of immutable and infallible happiness that then there is immutability in the creature. But these steady states are what they are because they are utterly dependent upon God’simmutability, and that in connection with His immutable justice and mercy. In reality there is no (dualistical) “immutability considered in itself.” Holy Scripture, the only infallible rule of faith and life, is the ground of reality, not “the thing of itself.”

To reject God’s immutability is to reject all His attributes, deny the very being of God. God’s “name isbeing” (H. Bavinck). True, for His name is “the I Am.” “This name is an unchangeable name” (H.B.). True, for His name is I-am-that-I-am. His name is, I am He Who is, Who was, and Who is to come. Therefore, God never comes with a New Deal. “He has always had the one and only immutable will” (H.B.) or plan, and that is eternally perfect. “God is the I WILL BE THAT I WILL BE” (H.B.). There is no “before” or “after” for God. But there are creatures, things, which before did not exist and afterward do exist. There is no parallax in God. (Optical, binocular parallax is the apparent change in position of an object seen separately first by one eye and then by the other.)

The immutability of God, so far from being a comfort to the persistently wicked, is, and will be, for them a fearful thing in their thoughts and experience. For the Lord will not change His determined purpose to punish sinners and their sins in order to gratify men’s lusts in continued enjoyment of their evil ways. What! God dishonor Himself to ease men in their carnal security! Must God change His nature, cease being God, so that they be undisturbed in their vileness? God invariably loves the right, and as much as ever hates the evil. He is the same unchanging Enemy to the wicked, the same Friend to the righteous. As He always has been, with a strong aversion to sin and that in justice to punish it, so He will be still. Daily He judges sin and sinners throughout all time and unto eternity, This is His immovable decree: “He that believeth not . . . the wrath of God abideth (is continually kept) on Him” (John 3:36). The same decree declares with finality, “He that believeth not shall be damned.”

But, on the other hand, what a comfort this property of the divine nature is to the Lord’s people! His immutable decree has determined the bounds of the sea (Job 38:11). If this decree were not immutable, were capricious, we might well fear the devastating inundation of our land from both the Atlantic and Pacific Oceans. No one lives under this dread because God’s decree is fixed. Also at the Cross God’s face still shines upon us in mercy. There He is as ready as ever to accept any who come to Him for rest! In the Cross we see that His love never changes (Jer. 31:3), and that His truth endureth for ever (Ps. 117:2). Is there then more reason to doubt His love than His truth? For the decree of His love is, for all walkers in the Light, “the blood of Jesus Christ . . . cleanseth(keeps cleansing and cleansing!) us from all sin” (I John 1:7). The wheel of providence rolls over “change in all around I see,” but it spins on the axle of immutable love. “Heav’n and earth shall pass away, Changeless, Thou shalt live for aye!” “Unchanging is the love of God, From age to age the same, Displayed to all who do His will and reverence His Name.” 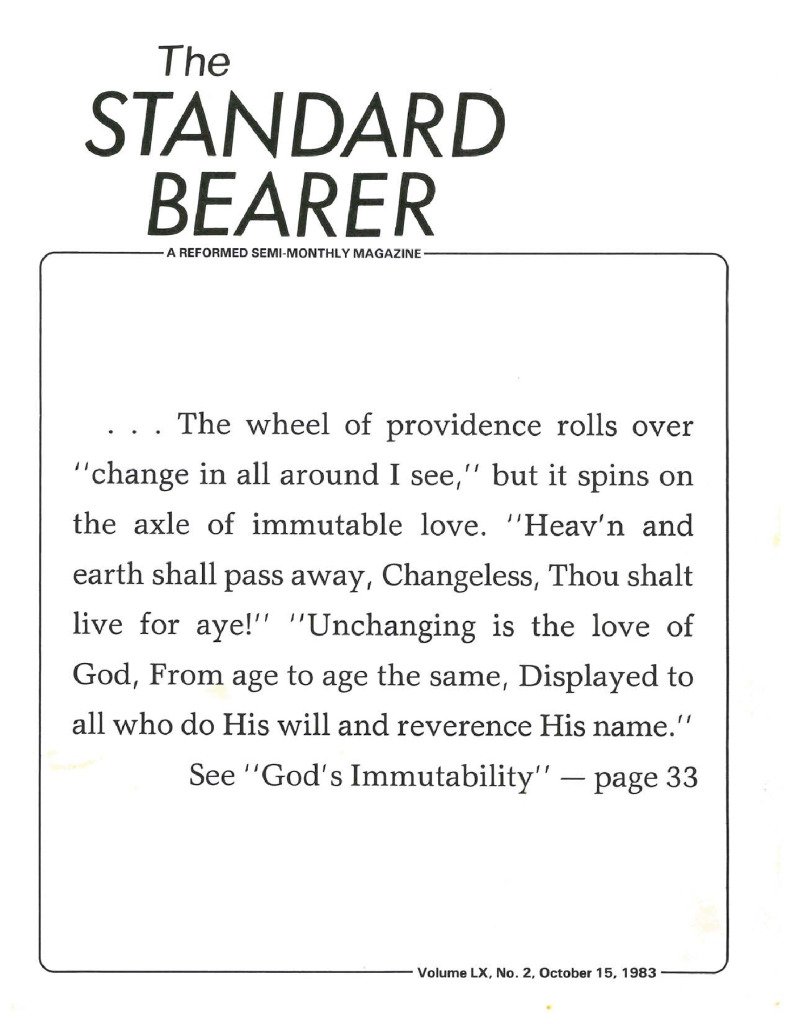