God’s Glory In Our Salvation

God’s Glory In Our Salvation

For after that in the wisdom of God the world by wisdom knew not God, it pleased God by the foolishness of preaching to save them that believe.”

Did you notice that three times God’s Name is mentioned in this text?

That should tell us something!

It is He Who has the preeminence!

If you pass this by, and look only at the last part of the text, and conclude that the salvation of believers is the important element in the text, then you would miss the significant element!

Important as the matter of our salvation may be, in fact so important that we have included it in our theme, yet we would miss the Word of God here if we were to conclude that this was the main thought.

In this day and age, when Arminianism is rampant, when even those who call themselves Reformed are laying stress on saving souls for Christ; when those who would be Reformed contradict by saying: not man’s salvation is first, but God’s glory. And when they are being scandalized for doing so, it is time to show that the latter, not the former, stand in good company.

They stand on the basis of Scripture, and in the line of the prophets and apostles!

They see also in our text that it is the revelation of the wisdom and of the good pleasure of God which receives all the emphasis! It is God Who is revealing His wisdom when He confounds the world which, with all of its wisdom, refuses to acknowledge God. It is God Who brings to light His sovereign good pleasure, when He through the preaching of the gospel, which the world counts foolishness, ordains to save believers. That there are believers who are being saved through the foolishness of preaching is entirely the result of God’s sovereign and eternal good pleasure.

Such is the idea and significance of the Word of God in our text!

God will magnify His wisdom by destroying the wisdom of the wise, and by bringing to nought the understanding of the prudent. It seemed good to Him to do this by saving those that believe through the foolishness of preaching.

The preaching, you understand, of the cross of Christ!

You will note that earlier in this chapter (verse 18), the apostle spoke of the Word of the cross (not the preaching, as the translation has it). This Word of the cross, as we pointed out on another occasion, is the Word which God Himself speaks, and therefore it is the power of God unto salvation, or a power in those being saved. Now, however, the apostle in our text informs us that God is pleased to have that Word of the cross also preached. There is no contradiction here. Rather, there is development of truth. In the first instance, the apostle informs us that there is in the cross of Christ the Word of God which is God’s power working in those who are being saved; a word which, at the same time, is foolishness in them that perish. In the second instance, the apostle informs us that that same Word of the cross which God speaks and which is His power unto salvation, He is pleased also to have preached. And this preaching, which the world also counts foolishness, God uses to confound the world’s wisdom, while at the same time He uses it to save them that believe.

It is all this that God ordains to be preached!

That is, that Word of the cross must be audibly proclaimed, declared by heralds. In unmistakable language the glad tidings of salvation through the cross of Christ must be spoken by messengers prepared and sent by Christ Himself into all the world, and to whomever God in His good pleasure will have the gospel come.

It is this Word of the cross, and its preaching which the wisdom of the world counts foolishness!

And make no mistake about it, God very really confronts the world, with all its wisdom, and makes that world to look at the cross, and to behold the central figure on Calvary as He sheds His life’s blood, and to hear the announcement, the proclamation, that through the blood of Christ God is saving those that believe. He will not allow that the world with all of its wisdom shall not know anything about it, or worse still, to ignore it. He makes it so that the world must make a judgment, it must say something. It makes no difference whether that world was present when Christ was crucified, which, incidentally, it was; or whether that world two thousand years later is confronted with the gospel — always God sees to it that the world is to give its assessment. It must say something about the Christ of the cross!

The world asks: Would you have us believe that a Man Who calls Himself a mere worm, can possibly be the Saviour of the world? Do you mean to tell us that the world can be saved by the mere blood of an innocent Man? O, we recognize all right that there is something wrong with the world. It is surely sick, and we need someone who will lead us out of the mess and make this world a better place to live in. And we are looking for just such a saviour who will bring peace to the nations of the world. We are not ready to say where this saviour will come from, whether he will come from the sphere of science, or the sphere of education, or some other sphere. We are wise enough to see and prudent enough to observe that with all the latent powers we have of atomic energy, of science and invention, of abundance of education, we are heading for a catastrophic end, unless someone appears soon who will lead us out and show us the way. But a Saviour Who must die on a cross, and by the shedding of His blood will save anybody, — nonsense! We will have nothing of Him! The whole idea is pure foolishness!

And God says, I will make your wisdom to be extremely foolish. And what you call foolishness, precisely that will I use to condemn the world and to save My people!

The only way in which anyone shall be saved is through the Word of the cross and its proclamation!

Disregard the cross, make light of the blood of the cross and count it an unholy thing, and there is no hope of salvation for you. Call the preaching of the Word of the cross foolishness, and you have closed your ears to the only Word that can save you. This is the only way to salvation pleasing to Me!

God’s good pleasure! Ah, it is the most beautiful word in all Scripture depicting His sovereign counsel and decree. God found eternal delight in saving His people precisely in this way.

Why was this way the only way pleasing to Him?

In the first place, because it was in this way He would display His own wisdom. God’s wisdom is that divine attribute according to which He chooses the best possible end, and determines and uses the best possible means to attain to that end. The best possible end is His own glory, and the best possible means to attain to that glory God also determines and uses, namely, His own coming in the Person of His Son into the world and in our nature, assuming our guilt, and bearing in our stead His own wrath over against our sin and guilt, and imputing unto us His own righteousness and glorifying us with His own glory in heavenly places in Christ Jesus. That is briefly the wisdom of God! It is His wisdom, displayed in the cross of Christ, while it confounds the wisdom of the world and makes that worldly wisdom exceedingly foolish. And what the world with all its wisdom calls foolishness, is the display of Divine wisdom to save unto the uttermost all who have grace to see it, believe it, and adore it. It was therefore God’s good pleasure through the preaching of the cross to save those believing, in order thereby to reveal His sovereign and eternal wisdom.

And, in the second place, in close connection with the preceding, it was His good pleasure through the preaching of the cross, to be acknowledged as God, and God alone. This He accomplishes, first of all, by making foolish the wisdom of the world. We read in the context: “For it is written, I will destroy (bring to nought) the wisdom of the wise, and I will bring to nothing the understanding of the prudent.” And this is precisely what He does when He evokes from the wise and prudent their judgment concerning the preaching of the cross. He would make their wisdom to become revealed as utter folly. But, secondly, He accomplishes this by saving those who believe. Them He would save through the Word of the cross, and its faithful proclamation.

Herein we see the connection between God’s glory and our salvation!

Believers are they who possess a certain spiritual knowledge of all that God has revealed of Himself in His Word and through the preaching of that Word, and have come to rely on and trust in that God as the God of their salvation in Christ. This faith, this act of believing, they do not have of themselves. It is a grace divinely bestowed on them. They, upon whom this grace is bestowed, embrace the preaching of the Word of the cross with joy and great spiritual satisfaction. They find in that preaching the God of their salvation drawing them unto Himself. So, God in His great wisdom is pleased to save them and none other.

And what is it that they believe?

First of all, that God is God! That He, and He alone, is the all-glorious God, Who does all things for His own glory; also the work of their salvation from beginning to end.

Secondly, they believe that the preaching of the cross, with all that that entails, and with all its contents, is the highest possible revelation of the glorious wisdom of God.

Thirdly, they believe that their faith, whereby they consciously embrace Him as the God of their salvation in Christ, is given them, not on the basis of merit, but of pure and sovereign grace.

And they exclaim from the bottom of their hearts, O, God, how good and how great Thou art! Eternity will not be long enough to extol Thy praises! 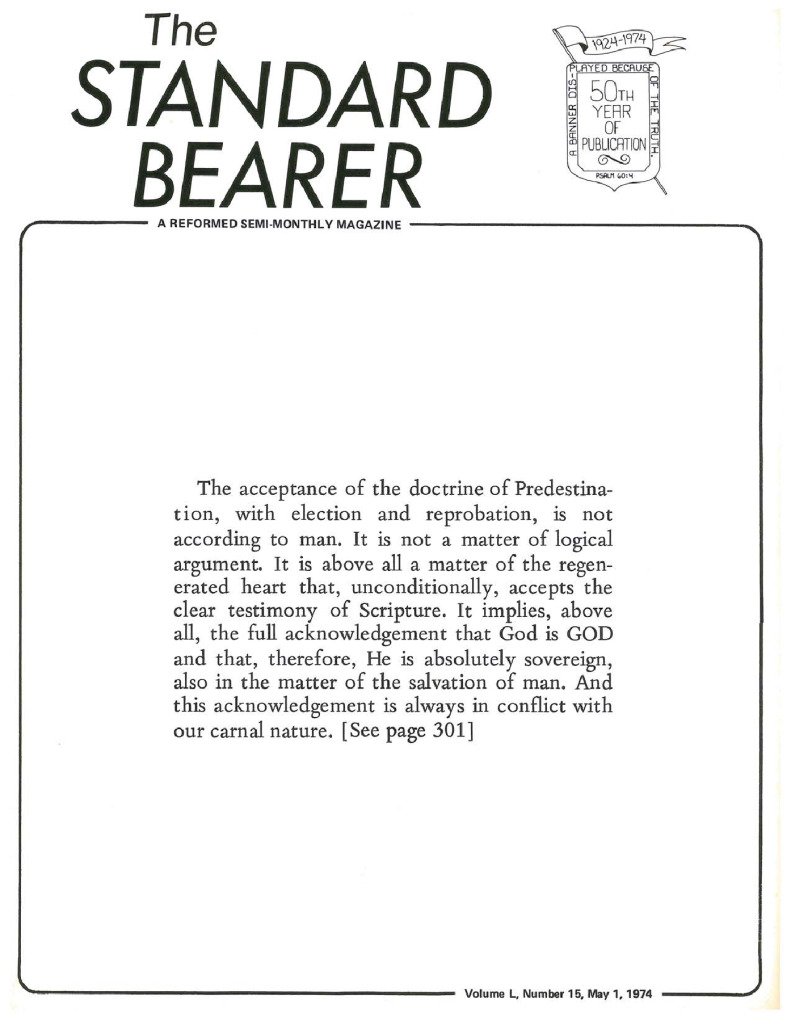