Rev. Miersma is pastor of the Loveland Protestant Reformed Church in Loveland, Colorado.

Then Joseph her husband, being a just man, and not willing to make her a public example, was minded to put her away privily.

But while he thought on these things, behold, the angel of the Lord appeared unto him in a dream, saying, Joseph, thou son of David, fear not to take unto thee Mary thy wife: for that which is conceived in her is of the Holy Ghost….

Then Joseph being raised from sleep did as the angel of the Lord had bidden him, and took unto him his wife:

And knew her not till she had brought forth her firstborn son: and he called his name JESUS.

In the immediately preceding context there is set forth the genealogy of Jesus Christ. Beginning with Abraham, Matthew traces the line of Jesus. Included in this line are four women, three of whom are stained with the sin of adultery, and the fourth, Ruth, is of the line of Moab, who was conceived in the sin of incest between Lot and one of his daughters.

When we come to verse 16 we see something different from what is seen in the preceding verses, where in the entire line there runs the word “begot.” But here Joseph is set forth as the husband of Mary, of whom, says Matthew, was born Jesus, who is called Christ. Then, to explain what is meant by this, Matthew shows in what wise Jesus was conceived and born.

The text sets forth the only possible way in which Jesus Christ could be our Savior. He was conceived, not by man, but by the Holy Ghost. Thus He was truly God and at the same time sinless, righteous man. Born in any other way would have made His being our Savior impossible.

Therefore, in order that there be no doubt as to what was already suggested in verse 16, Matthew now fully explains. Mary was found to be pregnant before Joseph and Mary came together, meaning that Joseph was not the father of the child within her. Mary’s being with child was the work of the Holy Spirit. This was confirmed by the appearance of an angel to Joseph, who explained to him that this was the fulfillment of Old Testament prophecy as found in Isaiah 7:14. This is further confirmed when we are informed that Joseph knew not Mary until the birth of Jesus. All of this establishes the miraculous birth of Jesus as the wonder of grace.

However, all this by way of introduction. Let us look more closely at the difficult position in which Joseph finds himself.

We notice in verse 19 that Joseph is identified as the “husband” of Mary. The two of them were engaged, that is, espoused (v. 18). Engagements in the day of Joseph and Mary meant much more than engagements in our day. Today, engagements are a promise to one another to marry, but which promise has no legal or binding character. If either the man or the woman for one reason or another wishes to break the engagement, the one simply tells the other of the fact. There may be sadness for one or both, or it may be mutually agreed on.

For Joseph and Mary it was different. Engagement was of a binding nature. The bridegroom and bride would pledge their troth to each other in the presence of witnesses. In a restricted sense this was essentially the marriage. That is clear from both the text and its context because, from the moment of espousal or betrothal, Joseph is called Mary’s husband (v. 19); and Mary is called Joseph’s wife (v. 20). According to the Old Testament regulation, unfaithfulness in either of the betrothed was punishable with death (Deut. 22:23, 24). Therefore, no further vows or ceremonies were needed.

Only the “coming together” (v. 18) was yet to take place. Though the two were legally espoused, it was considered proper that an interval of time elapse before husband and wife would begin to live together in the same home. This home-bringing, the bringing of the bride to her husband’s house, was made a festive occasion, with a procession and a feast following. Confer the parable of the ten virgins in Matthew 25. It was before Joseph and Mary had begun to live together, with all that this implies both as to domestic and sexual relations, that Joseph discovered Mary’s pregnancy.

Indeed, this was a shocking discovery for Joseph. You can imagine his disappointment. He truly loved his wife, and to think that she had been unfaithful to him, even to the extent of becoming pregnant by another man, was truly heartbreaking. He was torn with grief because of what his eyes saw in this gentle woman, whom he had always found to be a model of purity and who still bore this character.

Whether Mary revealed her pregnancy to Joseph or whether he saw her obvious condition the Scriptures do not tell us. The Scriptures simply tell us that she was found with child of the Holy Ghost. However Joseph may have found out, we know that it was not right away, for the angel first directed Mary to her cousin Elisabeth in the hill country, there to commune with her friend. As far as Joseph was concerned, Mary left it all in the hands of the Lord. This was an act of absolute reliance upon God, all the more admirable in light of the circumstances. And we know how the Lord did not disappoint her and her faith. The Lord is gracious.

We stated in the title of this article that Joseph was a godly man. Our text tells us that he was a “just man,” putting him in the same category as Zacharias and Elisabeth, who were “righteous before God, walking in all the commandments and ordinances of the Lord blameless.” In this same category we find Simeon who was “righteous and devout.” That Joseph was “just” refers both to his heart and to his conduct. Therefore, as a truly religious Jew, Joseph could not think of consummating his marriage with Mary under the present circumstances, no matter how much he loved her.

At the same time he “was not willing to make her a public example,” revealing that he was kind and tenderhearted. Although he was hurt deeply and very disappointed, yet in his love for Mary he did not want to do anything that would hurt her.

So what was Joseph going to do? He had two choices: either to charge Mary with adultery and thus make her a public example, letting such Jewish law as was in force at that time take its course. This was the harsher way that would have exposed Mary to public disgrace, which was exactly what Joseph wanted to avoid. Or there was the gentler, milder way, to make use of the lax divorce laws of the Jews, and without charging her with any crime, give Mary a letter of divorcement, stating the cause in a veiled way or stating none at all.

This was what was going through Joseph’s mind when the angel of God appeared unto him. Joseph did not simply dream about this angel. The angel of Joseph’s dream was real, he “appeared.” When God sends an angel messenger to a sleeper, He never has the least difficulty in demonstrating that the appearance in the dream is actual. Joseph knew that this angel had been at his bedside that night. It was just as real to him as was the earlier appearance to Zacharias and Mary and later to himself in Matthew 2:13.

The instruction of the angel was clear. Joseph must recognize the divine work of God upon Mary and take her to himself to wife. In but a few simple words the angel reveals one of the greatest mysteries ever to take place. “That which is conceived in her is of the Holy Ghost.” This was just what Joseph needed to hear. For a child to be conceived apart from the instrumentality of man in the normal way was unheard of and humanly impossible. Joseph would never have believed it had not an angel sent by God conveyed this information to him.

Now Joseph has God’s word concerning the child, an infallible word of truth that takes away all his fears and misgivings. He could take unto himself his dear wife. What joy must have flooded his soul. He understood that he could now be Mary’s protector, providing for her physical needs and defending her honor over against all malicious slander.

There is also joy for us in this message of the angel. In this truth of the virgin birth is the guarantee of salvation for God’s people, for apart from this kind of birth Christ could not have been their Savior. If Christ had been the son of Joseph and Mary by ordinary generation, then He would have been a human person, and as such a sharer in Adam’s guilt, hence a sinner unable to save Himself or others from sin. In order to save us, the Redeemer must in one person be both God and man, sinless man. The doctrine of the virgin birth satisfies both of these requirements. It reveals to us Jesus Christ, one divine person with two natures: divine and sinless human.

Joseph unquestioningly obeyed the angel of God. He took Mary to himself as his wife, but he “knew her not” till Jesus was born. This, also, is part of the God-ordained plan for our salvation. Joseph presents to us a beautiful example for us to follow. He walked in willing submission to God’s revelation. He accepted the word of the angel as the very word of God Himself, and obeyed accordingly.

So we are called to walk this season. There are many who deny the truth of God’s revelation in this text. We must not listen to them. They are haters of God and of His Word. Nor may we cover up the wonder with all manner of outward celebrations. But hearing God’s Word, we humbly worship Him. So did the shepherds on the night of His birth. So did the wise men from the East some time later. We too bow in adoration before our Savior. 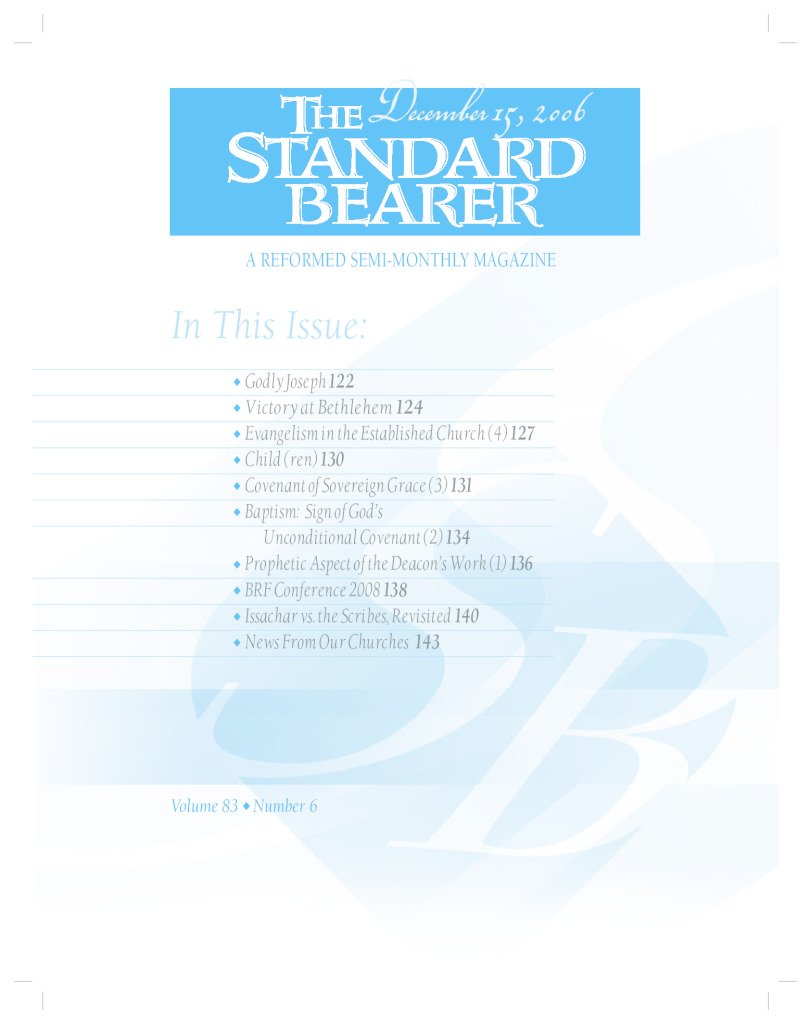