This close connection between the two tables of the law is reflected in the words of Jesus in Matthew 20:40, where He says that the Second Commandment (referring to the second table of the whole law), which teaches us to love our neighbors as ourselves, is “like” the first, which teaches us to love the Lord our God. That love of the neighbor as commanded in the second table is like the love of God, because, in the end, it is the love of God. As John says, “If we love one another, God dwelleth in us, and His love is perfected in us,” and again, “If a man say, I love God, and hateth his brother, he is a liar: for he that loveth not his brother whom he hath seen, how can he love God whom he hath not seen” (I John 4:12, 20). We understand, then, that in the last six commandments God teaches us to show our love for Him, by our love for our neighbor.

This is the reason why an unbeliever cannot really keep the law of God at all, though in some respects his outward behavior may conform to the demands of the law. He does not love God, and therefore any real love for the neighbor is also impossible (I John 2:9-11, 4:7, 8). Just as Jesus called the Pharisees “white-washed tombs” in their careful observance of the law, clean and white on the outside but full of dead men’s bones on the inside, so the many works of charity and kindness that are done today in the name of the brotherhood of man, and by unbelievers, though they may appear right in the eyes of men, nevertheless stink of death and corruption in the nostrils of God.

All this is of great importance in our study of the second table of the law. In learning what these last six commandments teach, we must be constantly reminded that more than mere outward conformity is required of us. In learning what they teach we must learn to love God and to serve Him in our relationships to other men. Thus, once again, we must seek for and search out God’s self-revelation in these commandments as well as in the first four commandments of the law. Knowing the revelation of His glory which God has given as the foundation of each of these commandments, we will be able to make our obedience to each commandment an act of love toward Him, as well as toward our neighbor, and in our relationships to our neighbor we will also be able to fulfill the purpose of our existence, and to show His praises forth in gratitude.

The revelation which God gives of Himself in the Fifth Commandment is very precious to God’s people, and a source of great comfort and hope to them in the many troubles of their present life. God teaches us in the Fifth Commandment that He is sovereign, and we all know the comfort of that truth. In a few words, it is the comfort of knowing that “He which hath begun a good work in you will perform it until the clay of Jesus Christ” (Phil. 1:6). This means, therefore, that we, who love God and the truth of His sovereignty, are called to maintain and confess that truth by submitting to those whom God has placed over us in positions of authority, as well as by exercising authority in the proper way when it pleases God to set us in such a place of authority. To put it another way, we enjoy the comforts of the truth that God is sovereign, not in some esoteric and intellectual way, but in the most basic relationships of life, by living in those relationships as God commands in the Fifth Commandment.

It is no coincidence that the godlessness and lawlessness of our society have appeared together. The lawlessness that troubles society is a result of its refusal to bow before the sovereign authority and power of the Almighty. That lawlessness shall finally issue forth in the Son of Perdition, the Antichrist, who “shall speak great words against the most High. . . and think to change times and laws” (Dan. 7:25). The shame is that this spirit of lawlessness has invaded the church, so that the authority of the offices and work and discipline of the church are despised, and so that some to whom God has forbidden a place of authority in the church, intrude themselves into these positions by indecent means. But though it is shameful, it is not surprising, for the church, by and large, has also forsaken the truth that God is sovereign, so that the lawlessness which troubles the church only reflects a god-less teaching and preaching.

That God is sovereign means first of all that He is Almighty. He is not just greater in power than all others who have power or strength, but He alone has power. He is “the blessed and only Potentate, the King of kings, and Lord of lords” (I Tim. 6:15). This must be made clear over against all the lies that men tell about God, even while claiming to believe that He is sovereign. That He is the Almighty means that there is no creature, great or small, not even Satan, or his demons, or any one of the wicked who blaspheme His Name, who has any power apart from Him. Satan’s power to rise up against the kingdom of God and against the church is given to him by a sovereign God (Job 1:12, I Kings 22:21-23, Rev. 20:1-3). The same is true of the wicked. They have no power to do anything at all, except it be given them from above (Prov. 16:9, 21:1, Is. 45:7, Amos 1:6, John 19:10, 11, Acts 4:26-28). All creatures are so in the hand of Almighty God that without His will they cannot so much as move (Heid. Cat., X, 28, Dan. 4:34, 35).

That God is sovereign means also that He has all authority. His sovereignty, in other words, is not just the sovereignty of might, but also of right. He has not only the power to govern and direct all His creatures, but also the right to do so as their Creator, and as the sovereign Architect Who has decreed all things from eternity. Even more than in His power, His sovereignty is revealed in His authority and right to rule His creatures, as Paul points out in Romans 9:21, where he speaks of the right of the Potter over the clay.

The Fifth Commandment is concerned especially with Gods authority, and requires submission to all those whom God has placed over us in positions of authority. God has given to such persons first of all the right to rule our lives, and He requires in the Fifth Commandment that we recognize that right. Certainly those who have such positions ought also to have power to maintain and uphold their authority and to do what is required of them in their position. Especially that is necessary in this sinful world. But even if they do not have that power, they still have the authority and must be honored in the Name of God Almighty Who gave them that authority.

It is not circumstance, therefore, which gives authority—not might, or wisdom, or social standing, or the consent of the governed (as our own godless Constitution states), but God only. God may use circumstances to bestow authority, and He may give it in different ways, even through rebellion against authority, as He gave it to our own government some 200 years ago, but He remains the sovereign and only Potentate, and must be recognized as the source of all authority.

The Fifth Commandment, therefore, in requiring submission to the authority of parents, husbands, employers, government officials, and officebearers in the church, is really requiring submission to the authority of God Himself. Paul says that in so many words in Romans 13:1: “Let every soul be subject unto the higher powers. For there is no power but of God; the powers that be are ordained of God.” Thus it follows that “whosoever therefore resisteth the power, resisteth the ordinance of God.” Resisting authority is resisting God and denying His sovereign right to rule over us through others. That is why all politics or theology or resistance must be an abomination to the believing child of God.

The world throws off the yoke of authority increasingly today, and always as much as it dares in the home and in society exactly because God is not in all their thoughts. The Christian submits to authority because God is in all his thoughts, and especially because God has chosen to execute His power and show His authority through Christ, Who is the Savior of all Christians.

Rebellion in any form “is as the sin of witchcraft, and stubbornness as iniquity and idolatry” (I Sam. 15:23). Just as much as witchcraft is idolatry in that it trusts in superstitious practices, rather than in God, so also is rebellion and disobedience idolatry in that it rejects the authority that God Himself has given to certain persons; and in rejecting that authority it rejects God and worships another god, the god of this world, who has no power and authority in himself, but who has used his God-given authority to become the first great rebel (Is. 14:12-15, Eph. 2:2). Obedience, on the other hand, glorifies and honors a sovereign and almighty God.

That obedience is a gift of grace. By nature we too are children of disobedience as others (Eph. 2:3), and as such we also are rebels against God and against all those whom God has placed over us with authority. In connection with the demands of the Fifth Commandment, we shall certainly be able to see our own shortcoming and failure. But God Who is rich in mercy sent us His obedient Son, Who was obedient even to the death of the cross, that His obedience and submission might cover all our rebelliousness (Phil. 2:8). That Savior, now risen and exalted, has left us an example of obedience in all the spheres of life, and has poured out His Spirit into our hearts to teach us new obedience and to give grace sufficient to serve and honor the authority and power of our sovereign God and Father. 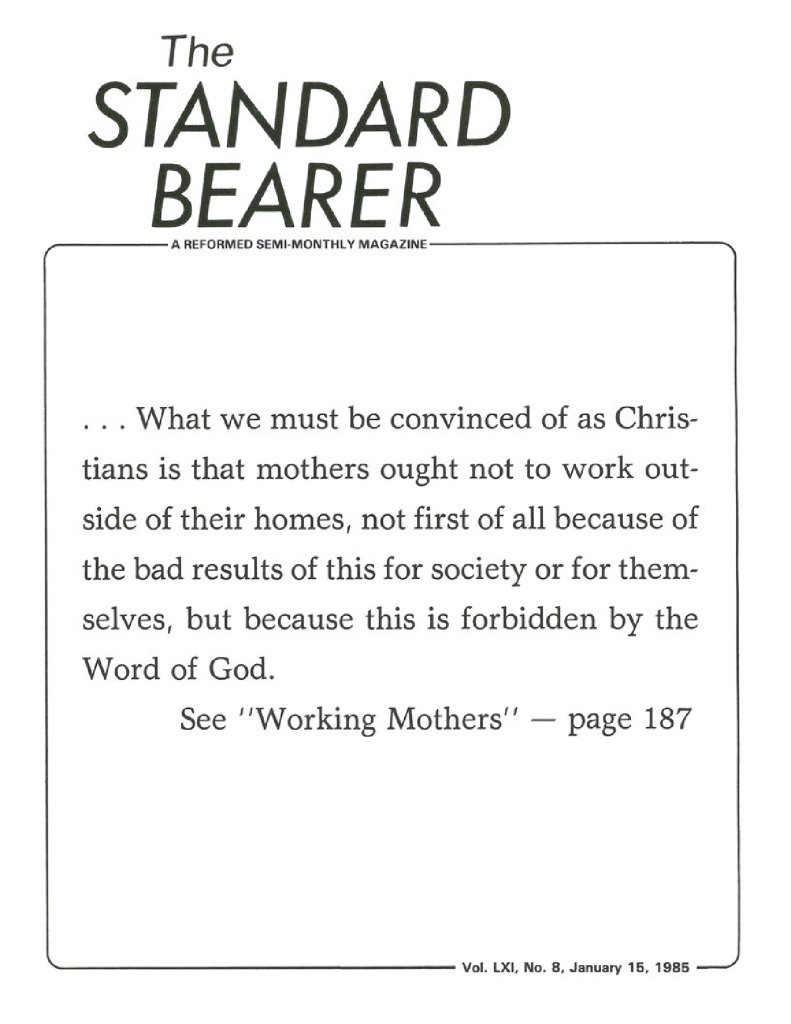