Games of Skill and Games of Chance

Such is the difficult though timely subject assigned to us for this article. We say, difficult, because it is a subject which, with all its related questions, has occasioned much contention in the past and concerning which there is much difference of opinion even today. And we add that it is timely, because our task as we see it is not merely to bring out the difference between games of skill and games of chance, but also to ascertain as to whether or not these games should have a place in our lives, and if so, to point out how large a place this should be. This we regard to be very fitting and necessary, especially today. For no one can deny that we live in a pleasure-mad world, a world which is characterized by superficiality and worldly- mindedness, and in which there is lack of spirituality and knowledge of the truth. And living in such a world, we as Christians are tempted to go along with the stream and thus lose our distinctiveness in our amusements. Hence the need that with a view to these we learn to see the boundary line more clearly, and that ever again we be reminded of our peculiar calling, so that also in our games and entertainments we may truly be a different people.

forth any effort of our own and God determines the game without us.

This does not mean, however, that every game is solely a game of skill or wholly a game of chance. For taking notice of the various games played today, we soon discover that some of the games consist of an element of both, chance and skill. Think, for instance, of the card-game. The outcome of the game depends not only on our ability and intellectual acumen, but also and largely so on the cards one receives to begin with. Hence it is not only a game of skill, but also of chance. And such games there are many today. In reality, therefore, there are three kinds of games: games of skill, games of chance, and games of skill and chance.

What must be the Christian’s attitude toward these games? In answering this question we do well to first answer the question, whether at all we should play any game. For there have always been those in the past, and there are still a few today, who maintain that life is so serious that we should always work and never play. The question therefore arises: are games as such sinful? In answer to this question, we should bear in mind first of all, that diversion, recreation and a change of occupation, either mental or physical, is simply necessitated by a law of human nature. Both the body and the mind become exhausted through being constantly and for any length of time busy at the same task. We crave for a change and except this change be had, life becomes a continual grind and we are not fit for our calling. And then, too, it should not escape our attention, that Scripture itself informs us, that the saints of old often made mirth, played, leaped and danced for joy; and that wise Solomon spurs us on to rejoice and be glad in the days of our youth. Therefore we may safely conclude that the playing of game as such is not sinful, and that recreation and amusement can be either good or bad. The question whether they are good or evil, all depends on the content we give them. Time and place, measure and means our aim and purpose; all these determine the character of our play.

But then how about games of skill and games of chance? Also here God’s Word must be our only guide. And turning to that Word we read in I Cor. 10:31: “Whether therefore ye eat, or drink, or whatsoever ye do, do all to the glory of God.” If we bear this principle in mind, namely, that our entire life must be to the glory of God, it will not be difficult to settle the question as to proper and sinful games. For according to this principle also our games and amusements must be to God’s glory. This means that the content of our games must not be in conflict with God’s law, so that the playing of these games would be God dishonoring. Nor may they be empty and vain, so that God receives no glory and we ourselves derive no benefit. Instead they must be in harmony with the law of God and their nature must be such, that they serve to equip us and make us fit for life’s task, namely, to glorify our God. Turning again to the Word of God, we find that in Ephesians 5:16, we are exhorted to redeem the time. This certainly implies, that we must not only use every moment of our lives to glorify God, but above all, that with a view to God’s glory and our own edification, we must use every moment in the best possible way. The question for us in general is therefore not: what do I like best? Nor should it be: what pays best? And with a view to games and amusements, the question is not: what is most entertaining and thrilling? Nor should it ever be: what is most to my liking? But always and everywhere the question must be: how and where can I best glorify God. And how can I best prepare myself, so as to be able to do such in an ever greater measure.

With this in mind we may draw the following conclusions. Firstly, that we should play only games of skill. Games of chance should have no place in our lives at all. If for any reason, then surely for the reason that the more serious-minded of God’s people in the past have always opposed these games. True, they were not always able to detect and expose the evil of these games, but nevertheless they felt that games of chance should be shunned by the Christian. This general attitude of God’s people, as also the fact that indulgence in these games is always on the increase in times of superficiality and worldly-mindedness and that it is generally the less serious who indulge in them, should have something to say to us. It would surely be the height of conceit on our part to indulge in that which the more since in the past, who were also led by the Spirit of God, condemned.

Moreover, games of chance are also a gross waste of very precious time. They require no skill, intellectual acumen or physical adroitness, so that the result is, we ourselves derive no benefit, nor does God receive any glory. They are empty and vain. This is also evident from the fact, that those indulging in them soon become superficial and mind only the things that are seen. But what is even worse, they are a dishonor to God. For God has created man to rule as king over the works of His hands, and He has thereunto endowed him with the necessary talents and ability. But in games of chance, man willingly abdicates and subjects himself to the things to attain his goal. He refuses to earn his possessions by earnest effort and to rule over the things round about him. Instead he sells his soul to the things which he plays and looks to them to determine the end. And the result is, man who was created to be king, has become a slave. For in slavish fear he watches the turn of the wheel and the distributing of the cards. And it often happens that he responds with passions of anger and disappointment, and not infrequently it is seen that the things to which men sold their souls lead them to suicide. Hence all games of chance we must shun and only games of skill may have a place among us.

Secondly, however, we should use discretion even in choosing our games of skill. For not all games of skill can afford Christian entertainment. Dancing is sometimes also called a game, and surely it is not a game of chance, yet to participate would be a grievous sin. Nor are all proper games of skill of the same order. One is more edifying and constructive than another. And since we are to glorify God also in our amusements and are to redeem the time, we should choose those games which glorify Him most and serve to prepare us best to glorify Him more.

Finally, even these proper and best games of skill should have but a small place in our lives. True, aa such they are not sinful, sometimes they are necessary, and often they prove to be refreshing and beneficial. Yet even so, games should be a secondary matter. For redeeming the time we must seek God’s highest glory, and there are many other ways in which this is more easily and better attained. Therefore it is a saddening sign if, when families and friends are together, they know of nothing better than to spend an entire evening playing games, regardless whether these be games of skill or games of chance. It reveals that their spiritual life is at law ebb and that to them spiritual things are not worthy of discussion. And the deplorable fact is, it will become worse still, for they seek to feed their souls with husks. Let us then beware to put first things first.

The result will then be: amusement problems we will not present since we have none, the antithesis between light and darkness will be clearly seen and peace with God will be a daily experience.

The conclusion of the whole matter is therefore this: No games of chance at all. Only proper games of skill. And these at the proper time. How true are then the words of Jesus “Straight is the gate, narrow is the way, and few there be that find it.” 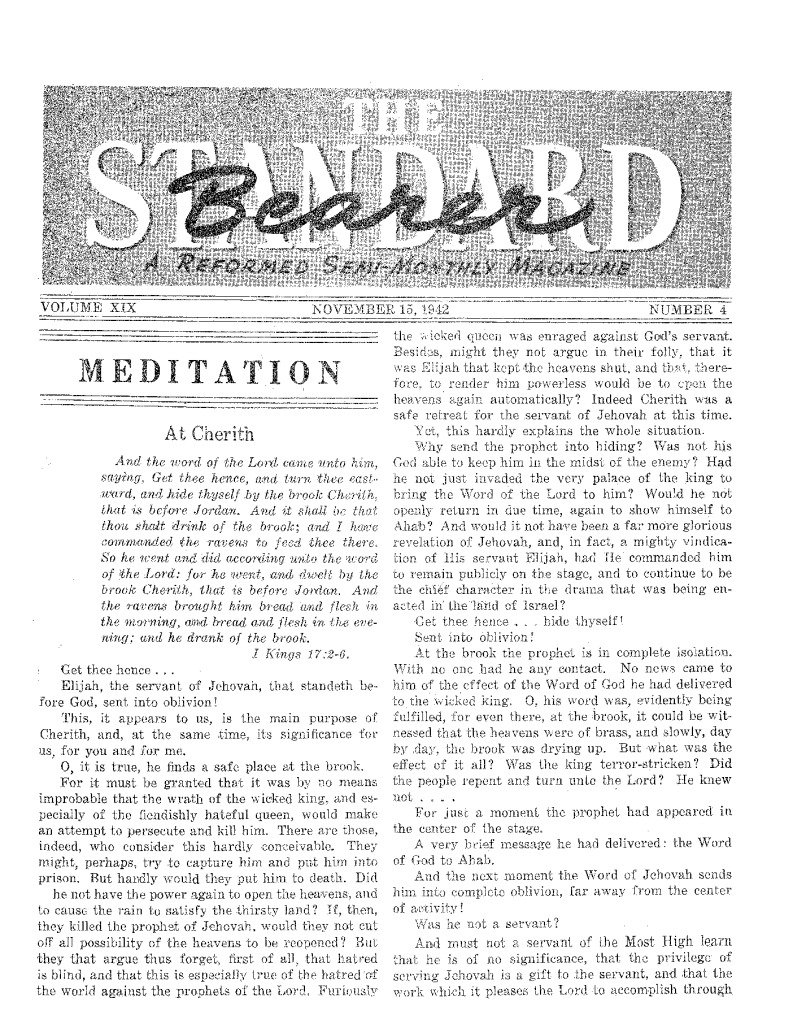