In this section of Ecclesiastes, Solomon is drawing a series of conclusions from the truth that death closes the door of life as the one event that comes to all, whether the righteous or the wicked. In natural man this truth stirs him to sin (Eccl. 9:3). For the believer, it means that his life in this world is shaped by the transitory vanity of life under the sun. The first conclusion, therefore, is that our focus must be to serve God with thanksgiving, rejoicing in marriage and in our daily bread and labor as our portion under the sun (Eccl. 9:7-10). We are not to set our heart upon the things of this life.

This brings us to the second conclusion the inspired writer would draw so that he leads us to return and again ponder what we see under the sun. “I returned, and saw under the sun, that the race is not to the swift, nor the battle to the strong, neither yet bread to the wise, nor yet riches to men of understanding, nor yet favour to men of skill; but time and chance happeneth to them all” (Eccl. 9:11). This conclusion might at first seem counterintuitive. Has he not said that we are to labor with all our might? Is not the logical conclusion then that the swift wins the race and the strong the battle? These are not denied as such, but he points us to what is seen in that “time and chance happen to them all.” The Authorized Version uses the word “chance” here to describe what appears to us under the sun to be a random occurrence that man could not anticipate. It happened and descended upon someone in the midst of his activity. The idea is that our works are in the hand of God (Eccl. 9:1).

Man’s life under the sun is governed by God’s providence, the working out of His almighty sovereign purpose or counsel. Man’s strength is not in himself nor is his life in his own hand. God sets the time and boundaries of our lives and circumstances, which “chance” upon us, that is, occur when we did not look for them. Therefore, the race is not to the swift, or favor (in the presence of men) to men of skill, except the Lord will. He is the God, “who worketh all things after the counsel of his own will” (Eph. 1:11). By the Lord’s appointment the race is won and the battle victory achieved. He gives bread to men, riches and honor under the sun.

As God is no respecter of persons and all things come alike to all under the sun, so also time and “chance” occurrence happen to them all. Man is not his own master. This is true generally of God’s providence, but especially when we contemplate it in the light of the truth that we shall die. Solomon points, therefore, to our finite character and how it works out in our lives under the sun. “For man also knoweth not his time: as the fishes that are taken in an evil net, and as the birds that are caught in the snare; so are the sons of men snared in an evil time, when it falleth suddenly upon them” (Eccl. 9:12). Our life and times, the measure of our days and our circumstances, are in the hand of God. We know not what is hidden from us in God’s counsel, so that man “knoweth not his time.”

He uses the figure of fish caught suddenly in a net and birds in a snare. They swim and fly freely in the activity of life when suddenly the net and snare come upon them and they are caught up in it and taken. So is the life of man under the sun generally with trial and affliction, “in an evil time,” but particularly when death falls upon him and takes him from this life as it were in the midst of his activity. “When it falleth suddenly upon them,” man too is caught unawares, though he knows he shall die. This sober reality underscores the calling to labor while it is day as sojourners in the world.

There is also a third consideration or illustration that he now brings forth. It arises in part out of what he has said, that the dead have no more “a reward; for the memory of them is forgotten” (Eccl. 9:5). It also arises out of what he has just said about the battle not being to the strong. “This wisdom have I seen also under the sun, and it seemed great unto me: There was a little city, and few men within it; and there came a great king against it, and besieged it, and built great bulwarks against it: Now there was found in it a poor wise man, and he by his wisdom delivered the city; yet no man remembered that same poor man” (Eccl. 9:13-15).

While the form of this narrative or story approaches that of a parable, Solomon is evidently describing, or drawing upon international events of his day in the kingdoms of the nations about him. His court was an international court, and he also studied the events of his day. He describes, therefore, what “I [have] seen also under the sun.” Events which, while he does not give us the specific details, he has observed. He says: “It seemed great unto me.” What he saw appeared important for the lesson it taught about life and also the place of wisdom.

A strong and mighty king was defeated in battle by one weaker through the wisdom of one poor man. God’s providence set the poor man and his wisdom in the city, and by his wisdom brought the strength and might of the great king and his siege of the city to nothing. “Yet no man remembered that same poor man.” The works of the poor man and his wisdom, which wrought a great deliverance for the city, passed away. He himself was not remembered. This again underscores that, under the sun, all that is of man is a passing vanity. Even man’s wisdom passes away.

He then concludes: “Then said I, Wisdom is better than strength: nevertheless the poor man’s wisdom is despised, and his words are not heard” (Eccl. 9:16). The illustration of the besieged city leads to further reflection. Wisdom overcame strength, physical strength and power, in the illustration just given. Wisdom is the better portion; but this also was seen: it was not remembered, nor the man who possessed it.

Wisdom encounters a certain problem to which the illustration points, in that wisdom is not regarded or remembered and the poor man to whom it was given is despised. He and the memory of his deliverance are forgotten, not only in death but also in life, so that the problem is broader. For even in life, the wise man and his wisdom are not listened to; his words are ignored. The problem is rooted in the pride of men, so Solomon speaks of despising the wisdom of the poor man. The word “despise” here, has the idea of one lifting the head in proud disdain for something beneath one’s notice. The man who is wise in the illustration is of no account. He is a “poor man,” a beggar. Who would notice him? Though in the illustration he delivered the city, his words are dismissed. “His words are not heard.” This may have been the case up until he delivered the city. But after delivering the city, he is again ignored and his wisdom forgotten.

While God is no respecter of persons, man, who shall die, is such a respecter of persons. In pride he disdains his neighbor who is poor. He will not turn his ear to listen, and the poor man’s words are not heard, which is to the proud man’s own hurt and ruin. His own folly is his undoing. As the believer is often set forth in Scripture as the poor and wisdom that of faith, the text also illustrates the place of a believer and his witness in the world.

To the subject of wisdom itself, Solomon now begins to turn his attention. This leads him to the conclusion of this chapter and into the subject of the next. He brings up the contrast between wisdom and folly, which has occupied much of Ecclesiastes. In considering this, the wise man and his wisdom go hand in hand. Despise the one and you despise the other. Verses 17 and 18 still draw on the illustration just given, but they could also well go with the next chapter.

“The words of wise men are heard in quiet more than the cry of him that ruleth among fools. Wisdom is better than weapons of war: but one sinner destroyeth much good” (Eccl. 9:17, 18). Wisdom is the ability to put knowledge and understanding to use. While there is a certain practical “wisdom” in the world, true wisdom is founded in the fear of God, in acknowledging Him in all our ways and works. The truly wise man is one who walks by faith as a child of God. It is to the words of that wisdom and the hearing of them that our text turns.

Proud, natural man cannot hear nor retain the words of wisdom, because they are contrary to our sinful flesh and our old man of sin. But they are also learned, not in the midst of a world of shouting noise and tumult, but in quiet. Preaching, meditation on God’s Word, hearing and receiving instruction, require focused attention and spiritual reflection. “The words of the wise men are heard in quiet.” The cry and shouting of the world is set before us by way of contrast. Men rule by might and power over others. They exercise dominion by lifting up their voice. Such is the governance among men, who are here called “fools.” The word and the will of the ruler is driven home as it were by force. Wisdom cannot be acquired that way. The way of the world is one of force and contention of earthly strength and the power of the arm of the flesh.

Thus he says, “Wisdom is better than weapons of war: but one sinner destroyeth much good.” The illustration of the poor man delivering in the city shows this. Spiritual wisdom in the needs and cares of life and death gives a strength that weapons of war in the hand of a great king cannot. But this leads to an additional sober thought: “but one sinner destroyeth much good” (Eccl. 9:18). This is Solomon’s own trouble in certain respects. To this we will return in chapter 10, D.V. 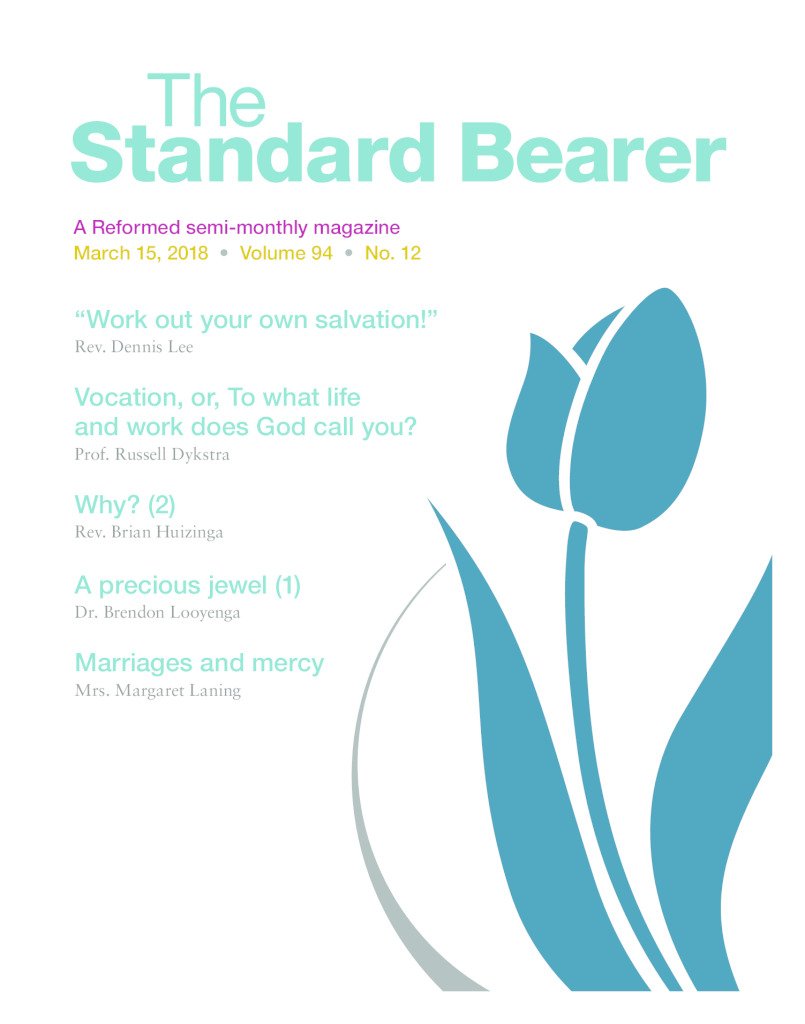