“Funeral sermons or funeral services shall not be introduced.”

Conducting funerals—one of the more difficult aspects of the ministry.

The deceased may be an aged saint who has lived a full life. Or a young father or mother taken suddenly from the family. Or a teenager or child who dies before ever coming to maturity.

Usually the deceased is a member of the church. At times this is not the case. Often the family has the comfort of everlasting life and glory because the deceased has died in the Lord. At other times they cannot have this comfort because the dead one had lived wickedly and worldly.

No matter what the circumstances, funerals are never easy. But conducting funerals is a necessary part of the ministry. And funerals provide a unique ministry opportunity, both for comfort and warning.

It might strike us strange that Article 65 of our Church Order forbids funeral sermons and services. Are there, then, to be no funerals for God’s people? Is our practice today of having funerals, even funeral services in our church buildings, in conflict with Article 65?

The answer is: No. What is forbidden by Article 65 is making funerals official worship services of the church. A “service” with a “sermon” in that sense is forbidden.

The history of this article in our Church Order goes back to the earliest Dutch Reformed synods. Already the synod of Dordrecht, 1574, expressed its disapproval of official funeral services.

In the interest of the greater edification of the church, it is decided that funeral sermons shall be discontinued or, where there is no such practice, they shall not be introduced so as to avoid the danger of superstition that arises from this practice. We think that the tolling of bells at funerals should certainly be discontinued.

The synod of Dordrecht, 1578, reiterated this decision, adding “… and that in the same the praise of the deceased not be proclaimed.” Reflecting the concerns of past synods, the original Article 65 of the Church Order of Dordrecht, 1618-1619, stated:

Where funeral sermons are not held, they shall not be introduced; and where they already have been accepted, diligence shall be exercised to do away with them by the most appropriate means.

The decisions of the early synods are the reaction of the Reformed to the superstitions practiced in the Roman Catholic Church.

Back in the days of the Reformation, and still today, Roman Catholic funerals are official worship services. There is a prescribed liturgy. The body of the deceased is anointed with “holy water.” Prayers are offered for the dead and for those in purgatory. Eulogies are spoken in praise of the departed. Bells are tolled to announce the departure of the dead and to drive away evil spirits. And the Mass is conducted.

The Reformers rejected these abuses and were determined to rid the churches of Romish superstitions. For this reason there was to be no official worship service.

That remains the position of the Protestant Reformed Churches today. The consistory does not supervise the funeral service. The congregation is not summoned for worship, as is the case on the Lord’s Day, or the special days that will be mentioned in Articles 66 and 67. There is no prescribed liturgy. No “Form for Conducting Funerals,” as there are forms for the administration of baptism and the Lord’s Supper.

The main reason behind the forbidding of official funeral services is that funerals are not ecclesiastical but family affairs. Not the church but the family has the responsibility to bury their dead. They must arrange the funeral. They have charge of the service. They must see to it that the principles of God’s Word are carried out in the laying to final rest of the deceased family member.

It would be well that this reason for the forbidding of official funeral services were included in Article 65. In 1940 the Christian Reformed Church revised the article to read:

Funerals are not ecclesiastical, but family affairs, and should be conducted accordingly.

Other Reformed denominations have followed the lead of the CRC in this revision, including the Canadian Reformed Churches and the Free Reformed Church of North America.

Our funerals should give clear testimony to the hope and comfort that we have as Reformed Christians. This is the concern of Article 65.

Does this mean that tears are not to be shed, as if the Reformed Christian is unaffected by death? Not at all! Our Savior wept at the tomb of Lazarus (John 11:35). We grieve too when God takes a loved one from us in death. But our funerals must show that our sorrow is not at all the sorrow of the world which has no hope (I Thess. 4:13).

Even in the Old Testament the Lord was concerned that in their funeral practices the children of Israel distinguish themselves from the heathen surrounding them. “Ye are the children of the Lord your God: ye shall not cut yourselves, nor make any baldness between your eyes for the dead. For thou art an holy people unto the Lord thy God, and the Lord hath chosen thee to be a peculiar people unto himself, above all the nations that are upon the earth” (Deut. 14:1, 2). Also today our funeral practices must show that we are a peculiar people, holy unto the Lord.

Ministers must refrain from eulogizing. In our liberal-minded day, in keeping with the prevailing notion that God loves and wants to save all men, the worst wretches are preached into heaven at their funerals. But this wickedness has its beginning when the focus is placed on the deceased—his life and good works.

This is a real danger for Reformed ministers, especially when the departed saint lived an exemplary life and served the church honorably. But family and friends must be directed to God, not to man; to the work of God in Christ Jesus, not to the accomplishments of a human being. In this is our comfort and hope!

Ministers ought to take the opportunity of a funeral to issue the warning of God’s Word to the living. The living ought to be reminded that the end of every man is death, and after death the judgment.

This warning is all the more in place because at the funeral the minister often addresses a mixed audience. Often family, friends, and business acquaintances who have left the church or are living wickedly are present to “pay their last respects.” Perhaps there is present a son who had openly rebelled against his parent now deceased; or a grandchild who had had no use personally for grandpa or grandma’s piety. Or the business associate who has not attended a Sunday church service for years. The seriousness of death and the certainty of judgment must be brought home to them, that so they may be brought to repentance or left without excuse.

From time to time the question is raised about the legitimacy of cremation rather than burial. Is this an option for the Christian? Is this to be regarded merely as a matter of personal preference? After all, have not many of the saints been burned to death by their persecutors? And in the miracle of the final resurrection is not Christ going to raise all the dead, no matter how they died or how their bodies were disposed of?

All arguments to the contrary notwithstanding, the Scriptures very definitely favor burial over against cremation. This is not to say that it is absolutely forbidden for the child of God to be cremated. It is my understanding that there are countries in the world today where no choice is given, but, for various reasons, usually shortage of land for cemeteries, the dead are routinely cremated. And there may be other reasons, especially health reasons, that dictate cremation. Nevertheless, when the Christian has the choice of being buried or cremated, he ought to have his body buried.

Here are a number of reasons.

1. Our bodies are temples of the Holy Spirit and therefore, even in death, ought to be treated with the utmost respect.

2. The examples of the saints in Scripture indicate that burial was the norm. Although he owned no other portion of the land of Canaan, Abraham purchased the cave of Machpelah for a burying place. Lazarus was buried. Our Lord Jesus Christ was buried.

3. It can be demonstrated that cremation has its origins in paganism.

5. The Scriptures commend burial by comparing the burial of the believer to the planting of a seed, a planting which gives testimony to the Christian hope of the final resurrection. Cf. I Corinthians 15:35ff. 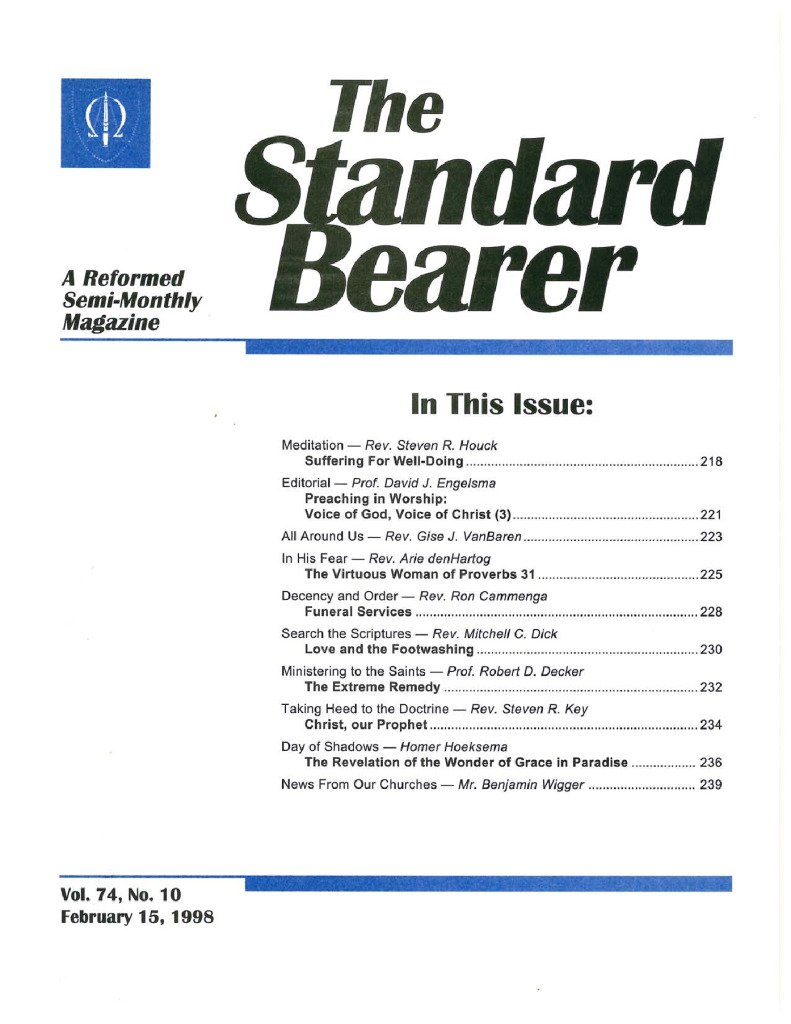