The apostle has more to say yet about the “riches” of this grace. Just because grace is “rich”, rich in the Beloved Son in the flesh, rich in His atoning death, and justifying resurrection and glorification, it must needs abound in other graces than the “forgiveness of transgressions”. And these other graces are not merely additional graces, but they are rather benefits implied, benefits to which we have an acquired, a bequeathed right in the Lord, a right that became ours in the redemption in His blood.

These other benefits are many. However, in verse 8, there are two that are singled out, and placed strikingly on the foreground. They are called “wisdom and prudence”. Of these we wrote in our first article (page 164) “That to this Church, who thus has been redeemed, God has caused to abound all wisdom and prudence, by revealing the Mystery of His will to them”. This thought is developed by the apostle in the verses 8-10.

At the outset, we would emphasize very strongly, that the subject in this portion is not at all: The eternal purpose of God to reunite all things in Jesus Christ, all things in heaven and on earth, and that, in the dispensation of the fullness of time. This thought is, indeed, expressed in the verses 9 and 10 of this chapter. But these verses do not contain the subject discussed by the Apostle. The thought contained’ in these verses is only introduced by the writer in a subservient way; introduced to show the historical dispensation of God’s redemptive history where not only all “wisdom and prudence” are given, are a possibility, but, where also they are (reely exercised, by the redeemed and forgiven Sons of adoption.

Hence, the subject is, a particularization of “all the blessings in heavenly places”, of which verse 3 speaks, and to which Rev. H. Veldman called attention. Among all these blessings which are ours by Christ’s redemptive labors, the apostle singles out “all wisdom and prudence.”

It can be of great service to us to take notice of the Apostle’s mode of reasoning. He does not reason from the Council to time and the benefits which we receive in time, but He reasons in the very opposite direction. He reasons from the concrete benefits to their source and eternal background. He takes his stand in the midst of the blessings, on the historical plane, on the level of the concrete situation in time, in our world lying in the midst of death, solid under sin. Here the cross was raised up, here the blood of Jesus was shed a ransom for many. It is here that we confess the Articles of our apostolic, Christian faith. Here were we born and here we die, here we fight the battle and long to be delivered. Here the Church has received every spiritual blessing in heavenly places! And the Apostle takes his stand, his point of departure here in this world, in time, among the blessings in time! And thus having taken his stand here, he traces these blessings in heavenly places to their source, their Author, who works all things according to the Council of His will.

And this same mode of reasoning the writer follows in the verses. Again he is speaking of the blessings that are ours. They are ours now in the dispensation of the fullness of times. They are for the whole Church, emphatically for her. And, as was said, they are the blessings of “wisdom and prudence”. These we have in a divinely arranged historical context. We have these in knowing the Mystery of God’s will, or, since God has made known the Mystery of His will. Important as the knowledge of this will is, it is not the subject, at best it is that part of the text which shows us how and why we have this wisdom and prudence.

To be sure, the Apostle does speak, in this passage of Holy Writ, of God’s eternal good-pleasure, His plan arid Decree, as it determines the entire history of the world, and the economy of Salvation. It is God’s good- pleasure to reunite all things in Christ our Lord, things in heaven and things on earth. And this God has made known unto us now in the Dispensation of the fullness of times, as He did not do this to the former generations of the sons of men. Eph. 3:1-6. The fact that God thus reunites all things in Christ in the present dispensation is assumed, as may be evident from a comparison with Acts 3:21, where we read: “Whom the heaven must receive until the times of the restitution of all things,” It is here assumed that God will reunite all things in Christ, rather than explicitly taught. Not the fact as such, but the making known of this truth is the important point here.

That this making known is indeed the important point we trust will become further evident in the closer study of these verses. Let us, therefore, turn to the text to attempt to see its implications.

As was already said, the subject here is: God has caused all wisdom and prudence to abound to us.

The verb “to abound” calls for just a few remarks. The fundamental meaning of this verb is that of: overflowing, to exceed a fixed number or measure. Hence, it means to abound. It is the very opposite of that which is partial, and in but a limited degree. In connection with this verb, we should further notice, that it can be taken either in intransitive or in a transitive sense. The King James’ Version renders it intransitively and translates: “Wherein He hath abounded”. On the other hand, the American Revised Version renders it transitively and translates: “Which He hath made to abound”. Materially it does not make a great deal of difference which rendering one chooses. In both cases God is the Author, He does something. That this is the case even when one renders it transitively becomes evident as soon as one asks the question: Wherein does God abound toward us? And the answer then is: in the riches of His grace. When God abounds in this “riches”, He does so, with a view to us, causatively. Causatively, with Divine efficaciousness the riches of grace becomes abundant from God to us. However, be this as it may, we prefer to render this verb transitively, and translate, as does the American Revised Version, “Which He has caused to abound.”

The question is: What has God caused to abound to us? The answer to this question, to a great extent, depends on the interpretation of the phrase: “in all wisdom and prudence.” The first matter, to which we must give attention is, the question of the grammatical place that this phrase occupies in the sentence. Must it be joint with the verb “He caused to abound”, or does it belong with the participle that follows, to wit 4 having made known the Mystery of His will”. Grammatically both are possible. The more natural of the two constructions would be the former. We would then read: God has caused the riches of His grace to abound to us in all wisdom and prudence.

But how will one decide? To come to a decision we will have as yet another question, namely, how must we view the relationship of “in all wisdom and prudence” to the verb “caused to abound”. Is this phrase thus related that it tells how God makes the riches of (His grace to abound? Does it tell us what motivated God to thus give grace in such a rich measure? If so, then the phrase is adverbial with the verb. However, there is also another construction possible, a construction which has our preference. According to this construction, which views “all wisdom and prudence” as the content of the riches of grace given, the Apostle is speaking of the actual display of grace as revealed in us, and not at all of the manner of God’s dealing with us. Not God’s doing is here them characterized, but His gift to us is here named. Wisdom and prudence are then not attributes and perfections in God, but they are gifts of God to us! Thy are concrete exhibitions and manifestations of the riches of God’s grace, a particularization of all the spiritual blessings in heavenly places, and that, also, as the peculiar grace that the New Testament Church may possess having come to manhood, to maturity in the Dispensation of the fullness of times.

This construction and interpretation just enumerated may be said to have the following in its favor.

In the first place, this is the more natural interpretation in the light of the immediate context. On would rather expect a further indication, a more explicit statement of the grace that is caused to abound, than that would expect a further description of the manner in which God caused this grace to abound.

Secondly, if “wisdom” would here refer to God’s wisdom one would hardly expect it to be prefixed, modified by the adjective “all”. “All” and “every” are hardly terms that fit with the wisdom of God. What is more “all” is not the same as the “highest” wisdom. “All” rather presupposes a predetermined measure. And this notion does not fit with the infinity of God. In elective grace God has determined the extent of “every spiritual blessing in heavenly places”. And “all wisdom” rather refers to all the wisdom that fits in that divinely arranged pattern of things. Compare the “all” in verse 3 with the “all” of this passage. Someone may interrupt and say: What about Eph. 3:10? Do we not read there of “the manifold wisdom of God?” We answer to this, that firstly, it should not be overlooked, that in 3:10 we have the addition “of God”; secondly, we should bear in mind that “manifold” there, evidently, characterizes this simple and divine wisdom in its historically revealed character. Of this wisdom, thus conceived, the Apostle exclaims, in profound amazement: “O the depths of the riches both of the wisdom and knowledge of God! How unsearchable are His judgments, and His ways past finding out.” Rom. 11:33.

Thirdly, and this is very conclusive, the apostle does not only write “in all wisdom”, but, he adds “and prudence”. Now prudence, practical sagacity, a judging of and choosing between the various alternatives in a given case is not to be ascribed unto God. His is a different, a divinely other wisdom. That this is the proper interpretation of the phrase “in all wisdom and prudence” is clear beyond a shadow of doubt when we make a study of the parallel passage in Col. 1:9, 10, which reads, “For this cause we also, since the day we heard it, do not cease to pray for you, and to desire that ye might be filled with the knowledge of His will all wisdom and spiritual understanding, that ye might walk worthy of the Lord unto all pleasing, being fruitful in every good work, and increasing in the knowledge of God.” From this passage it is abundantly evident that the apostle has in mind a “wisdom and understanding by which we walk according to the law of God and in His fear. This wisdom is “spiritual”, it is the fruit of the Holy Spirit, it is the part of the man who has the mind of Christ.

We conclude there, that the phrase “in all wisdom and prudence” does not define God’s dealing with us, but it indicates concretely the grace that becomes ours when He opens the flood gates of the heavenly blessings upon us as the New Testament Church! 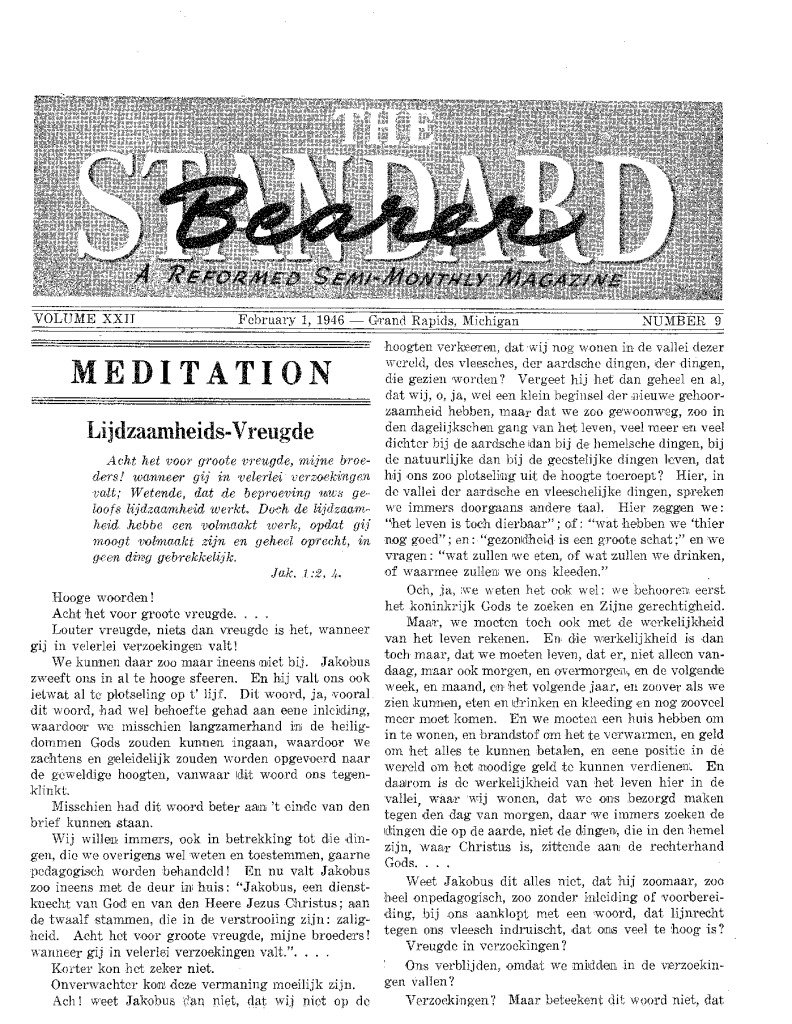