The last time we wrote on Romans 14, 15 was in the December 1st issue of The Standard Bearer. The attentive reader will have observed that we devoted two articles to the Gospel narratives dealing with the birth of Christ.

We now resume our series on the two aforementioned Chapters of Romans.

We hesitated to write on the remaining section ofRomans 15, because in it Paul no longer deals with the subject of the matters which are “adiaphora” and their Scriptural motivation. What we really have recorded is an “Epilogue,” a conclusion of Paul to the entire epistle. It is not simply some concluding remarks to the Chapters 14 and 15.

A rather superficial reading of this section, when compared with Chapter 1:8-16 will show that in it Paul refers to the same matters. It deals with Paul’s relationship to the Romans by virtue of his office. Thus it is in both sections.

In this section here in Romans 15:14-33 Paul touches upon the following matters, which we will here briefly state as follows:

1. He first of’ all expresses his fullest confidence which he entertains toward his readers, concerning his goodness, their being filled with knowledge, and their ability to teach each other. Verse 14.

2. He justifies his boldness of speech to them, as he had done in part in this letter, appealing to his calling and office of apostleship to the Gentiles. Verse 15.

3. In so doing, his only boast is in what Christ has wrought through him in the gospel! He dares boast in nothing else. Verses 16-19.

4. He mentions his plan to come through Rome, a longtime purpose of his, when he would go also to Spain to preach the Gospel, and of his desire to meet the brethren, and be sent by them on his journey westward. Verses 20-24.

5. He prays the church at Rome to remember him in their prayers, that, when he delivers the collections in Jerusalem from those of Macedonia, he may be delivered from those who are disobedient to Christ and the gospel. Verses 25-33.

In our present essay we would limit ourselves to the verses 14-21. This passage reads as follows:

“And I myself also am persuaded of you, my brethren, that ye yourselves are full of goodness, filled with all knowledge, able also to admonish one another. But I write the more boldly unto you, in some measure, as putting you again in remembrance, because of the grace that was given me of God, that I should be a minister of Christ Jesus unto the Gentiles, ministering the gospel of God, that the offering up of the Gentiles might be made acceptable, being sanctified by the Holy Spirit. I have therefore my glorying in Christ Jesus in things pertaining to God, For I dare not speak of an. things save those which Christ wrought by me, for the obedience to the Gentiles, by word and deed, in the power of signs and wonders, in the power of the Holy Spirit; so that from Jerusalem and round about even unto Illyricum, I have fully preached the gospel of Christ; yea, making my aim so to preach the gospel, not where Christ was already named, that I might not build upon another mam’s foundation, but, as it is written, They shall see to whom no tidings of him came, and they who have not heard shall understand.”

In verse 14 Paul expresses his own personal and complete confidence in the readers, the church at Rome. He singles out their “goodness,” their being “full of knowledge,” and the resultant effect that “they are able to admonish each other.” That the believers at Rome are full of “goodness.” The term in the original for “goodness” is an exclusively biblical term. It possibly refers to the fundamental uprightness of heart and life of the believers at Rome. They hate all that is false and vain. Since they are full of goodness, they can also be full of knowledge. They are instructed in the full counsel of God, concerning their redemption in Christ Jesus. The Word of God dwells richly in them. Hence, they are willing and able to admonish each other. The term for admonish in the Greek really means to place in mind!

Paul assures the believers that this fact concerning them has his fullest confidence. Up till this present moment Paul never entertained any doubts on this score. It appears from Chapter 16 that Paul is personally well acquainted with the members of this church. He mentions them by name, often stating his former relationships to them. Does he not mention such well-known former associates as Priscilla and Aquila. Compare Romans 16:2 and Acts 18:2, 26! He is fully persuaded concerning the integrity and ability of such people as Aquila and Priscilla, former teachers even of Apollas, the Alexandrian Jew. Had they not taught Apollas more accurately the truth, as it is in Christ’s death and resurrection and His baptism?

Having removed all thoughts that the motive of his boldness in writing the Roman believers was their lack, he can the better and more effectively point to the pure motive of writing, which follows from his God-given office as apostle of Jesus Christ!

The reason for writing is because of the grace given him from God. Surely this “grace given” him does not exclude the personal grace given him in the forgiveness of sins, and that he was the chief of sinners in that he had persecuted the church of God. See Acts 9:1-19. How often does not Paul refer to this persecution as being evidence of the great mercy of God toward him. I Tim. 1:12-17. However, equally as often as Paul speaks of this office this office is per se a grace of God. It is not simply a work, a calling; it is the grace of apostleship. That is what keeps Paul humble, and yet makes him bold in Christ. His is not an office of weakness, but of power and of sobriety. In that consciousness and power Paul has written this great letter to the Romans. Paul magnifies his office. Romans 11:13; I Cor. 3:10-15.

Because of this office Paul is a minister of Christ Jesus. Christ had placed him in this office. God had separated Paul from his mother’s womb unto this office. On the road to Damascus God’s Son was revealed in him. Gal. 1:15, 16. To him was revealed the truth that the Gentiles are fellow heirs with the Jews of the promise, as had been revealed to none other. Eph. 3:1-13.

What an exalted and God-glorifying view of this office!

Paul labors in a priestly manner. His “ministering” of the Gospel is like that of a priest in the temple. It is a service at the altar, so to speak. He is not simply a, steward of the people. His is not a public office of the people, for the people and by the people! He ministers, indeed, for the needs of the Gentiles. Is he not their debtor, a debtor of both the Greeks and the Barbarians, both of the wise and of the unwise? Rom. 1:14. But he is then a debtor who ministers to their needs as did the priest in the temple in the name of God! Verse 16.

Such is the motive of Paul writing this grand treatise, the epistle to the Romans!

But not only so. Paul also knows that through the power of the Holy Spirit the fruits will be for the altar, a sacrifice well-pleasing to God. When the Gentiles turn to God in faith and conversion such turning in praise and thankfulness is the fruit which the Lord has prepared for Himself upon His holy altar.

And upon this altar no strange fire may be burned. We know what happened to the sons of Aaron, when they brought in strange fire. They were rejected from the priesthood. All the fruit of Paul’s labors is of the fire of the Holy Ghost in the church! Nothing else! No more and no less!

For this reason Paul asserts in verses 17, 18 that he dares not speak of any things save those “which Christ wrought by me.” Yes, Paul actually boasts. Heactually glories. More often he writes of this glorying, does he not? Thus in II Cor. 1:12 he writes: “For our glorying is this, the testimony of our conscience, that in holiness and sincerity of God, not in fleshly wisdom but in the grace of God, we behaved ourselves in the world, and more abundantly to you-ward.”

In this passage of Rom. 15 Paul glories especially in the things pertaining to God in Christ. The work of God in the efficaciousness of the Gospel. It was the gospel of Christ that was fulfilled in the whole world. The translation which we quoted above reads as follows on verse 19: “I have fully preached the gospel of Christ.” On this passage Beza comments: “I have executed the commission of preaching” the gospel of Christ from Jerusalem, and all the regions round about until Illyricum. Luther translates “completely preached the gospel.” We believe that Paul means to express more than the simple universal preaching of the gospel. He used a very peculiar construction in this connection. He really does say that the gospel was fully preached. Fact is, that he does not use the term “to preach” at all. What he says is that the “Gospel was fulfilled” by me. According to the context, where Paul speaks about glorying alone in what “Christ wrought by me” this must mean that the gospel as a power of God unto salvation of every one that believeth “was fulfilled” in this power, as it accrued in giving faith to all the called, by the power of the Holy Spirit. Thus we read in Acts 6:7: “And the word of God increased,” and, again, in Acts 12:24 we read: “But the word of God grew and multiplied.” See also Acts 19:20.

Who caused it to grow and increase? None other but the Holy Spirit as the Spirit of Christ.

This is, incidentally, corroborated by what we read in verse 20: “Yea, making my aim so to preach the gospel, not were Christ was already named, that I might not build upon another’s foundation.” It is exactly here in Paul’s labors that we see the fulfillment of the gospel. The gospel realized faith. God called, through the Gospel, the things that are not as if they were. And here it was emphatically demonstrated that Christwrought faith through the gospel, causing the gospel to be fulfilled. And thus Paul glories in the Lord. And that alone is permissible. Our faith does not rest in the wisdom of words, but in demonstration of power by the Holy Spirit. I Cor. 2.

Such is the fulfillment of the Word of God in Isaiah 52:15, where we read, “They shall see to whom no tidings of him came”!

It is this that is the final clinching evidence in this letter to the Romans concerning the Gospel being a power of God unto salvation!

Paul returns in this section to the fundamental point of departure in this letter. He had shown the misery of man, his being sold under sin; the great righteousness of God in Christ, and our being raised with Christ in newness of life. Now he makes clear once more that the gospel, which surely is not an offer of God unto all who hear it, is the power of God unto salvation.

Thus alone he that glories will glory in the Christ, who causes the gospel to be efficacious unto salvation! 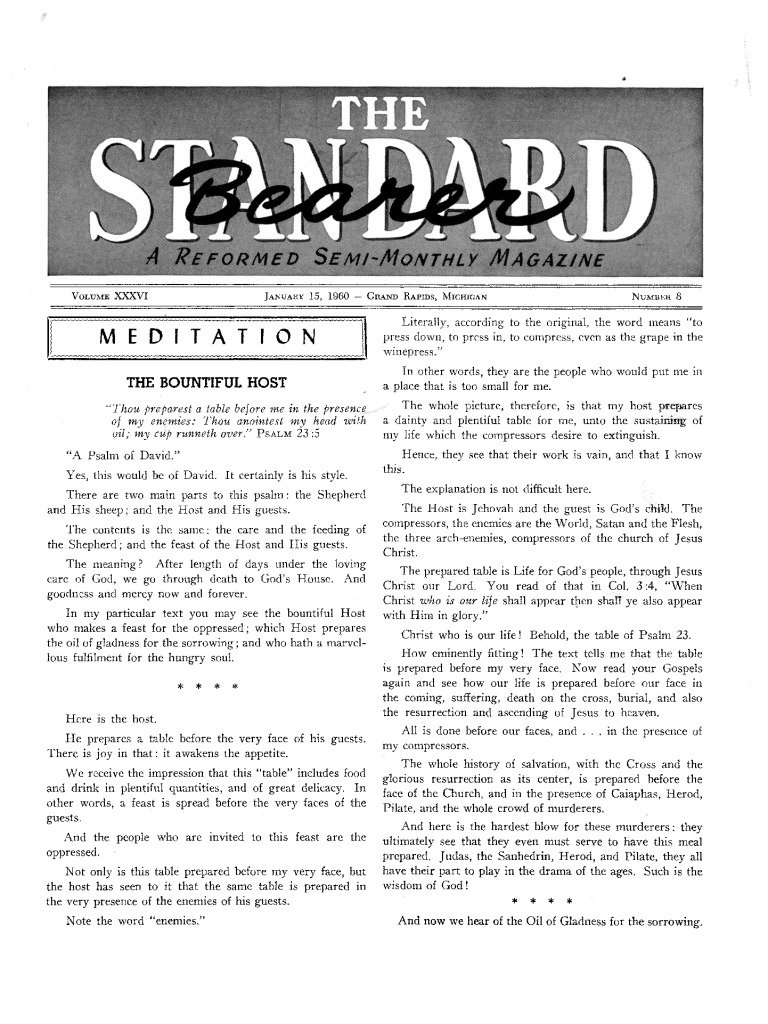