Would you classify him as a friend? Or as a foe?

Or would you classify him as partly friend and partly foe?

Of questions like these I was reminded by the feature article in The Outlook of March, 1977. In the example above, the answers are perfectly obvious. If you classified such a man as a friend, it could only mean that you were at heart a foe of your bride. If you attempted to evaluate such a man as partly friend and partly foe, you yourself could only be classified as a blundering fool. If you classified him as a foe, only then could you be commended for right thinking and for having your heart in the right place. Anyone can understand this. It seems strange, however, that when it comes to Reformed theology and the Reformed faith, men cannot seem to engage in the same kind of consistent thinking and clear evaluation.

Before I proceed, however, let me make it plain that my criticism is not directed primarily at the author of the article under discussion, a Dr. Alvin L. Baker; but it is directed at The Outlook, which highly recommends the article to its readers as “very timely and informative.”

The article about which I am concerned is entitled “Berkouwer on Election.” Actually the article is the final chapter of a doctoral dissertation on A Critical Evaluation of G. C Berkouwer’s Doctrine of Election.

The article itself is a mixture of favorable and unfavorable comments. It may even be said that the points of negative criticism outnumber the favorable comments. Let me list a few of the important comments on each side of the ledger without, however, expressing my agreement or disagreement with the comments.

On the positive side one finds such comments as:

1. “Berkouwer challenges the lazy pastor or theologian to think through propositions which have previously been repeated in parrot-like fashion. He drives the serious student to the Word to discover or rediscover the teaching of revelation in connection with election.”

2. “Berkouwer is also to be praised for injecting sound thoughts and opinions from historical theology into the contemporary discussion of election.”

3. “The Dutch doctor is to be applaused for his insistence that election should be preached and used pastorally.”

4. “Berkouwer is always the sworn enemy of arid theological abstractions, and this is probably more evident in his treatment of election than in any other area of theology.”

On the negative side one finds such serious charges as:

1. “In Berkouwer, historical reality seems to have swallowed up the eternal. True, he speaks consistently of God’s love being the a priori of election, but he is usually silent about the eternal aspect of election.”

2. “Berkouwer has led in the rebellion among conservative Reformed thinkers against the traditional concept of the all-comprehensive decree of God. Berkouwer can no longer accept reprobation, and he believes that the church should no longer preach that the reason for men having different spiritual conditions is due to God’s good pleasure.” And again: “However, Berkouwer is wrong, for the message of the church must include both God’s absolute sovereignty and the gospel of grace. In fact, if God’s absolute sovereignty is not strictly maintained, then grace will invariably be perverted by attributing too much to the activity of men.” Further: “Again, it must be said that Berkouwer’s greatest failure is his reluctance to set forth consistently the biblical and Reformed view of the absolute sovereignty of God.”

3. “Berkouwer, unfortunately, has criticized the orthodox doctrine of absolute sovereignty, as set forth in such symbols as the Canons of Dordt and the Westminster Confession.” And after stating that Berkouwer has followed Barth and Woelderink, the writer states: “His rejection of ‘causality’ as a means of explaining unbelief, and his neglect of the eternal and fixed aspect of God’s decree make his view of election a deviant from the Reformed tradition.”

4. Criticizing Berkouwer’s view of the relation between the will of God and sin, the writer states: “Berkouwer has oversimplified the will of God.” At the end of this section he writes: “Berkouwer’s theology falls short of this total testimony of the Word. Berkouwer dislikes equal ultimacy. He envisions absolute sovereignty as being the sixteenth century’s rationalistic deduction. However, election and reprobation are equally ultimate in the sense that God has willed the final destiny of all men. This is not a naked deduction made from some ‘starting point’ arrived at from outside of Scripture. On the contrary, this is a conclusion made from within all of Scripture’s teaching concerning God, man, and salvation.”

It is evident, therefore, that some heavy criticism is aimed at Berkouwer here. And I surely have no quarrel with this. For the most part I agree with it, though there are things which I would probably state differently.

But what do we get at the end of this article? Forthe most part, a favorable conclusion:

“It is not easy to criticize a man of Berkouwer’s theological acumen. He has produced much that will enrich the church until the Lord returns. His treatment of. the issues connected with election are (sic) usually thoroughly and fairly done.”

Then, after a word of criticism about Berkouwer’s tendency toward the subjective, the praise continues:

“Still, there is much to commend in Berkouwer. Theologians and preachers should be thankful that Berkouwer has shown such an interest in demonstrating the fallacies of those caricatures which have made election such a foreboding doctrine to some men. Berkouwer continually exhibits a pastor’s heart while dealing with the difficult questions related to election. For example, his insistence that the gospel offer is serious . . . remains as a needed corrective for any men who would follow their logic beyond Scripture.”

And what is the last word?

“In many ways, such as this, G.C. Berkouwer has done a work, in connection with election, that will strengthen the ever deteriorating marrow of theology.”

Now I am not interested at this time in analyzing the motives behind this kind of criticism. I suppose there are various possibilities.

And I repeat: my primary concern is not with the author of this article, but rather with those who enthusiastically recommend it, namely, The Outlook.

Consider, in the first place, that the truth of sovereign election (and with it, sovereign reprobation) has rightly been called the car ecclesiae, the heart of the church.

Consider, in the second place, that it is not only true that discussion of election and reprobation is not only very much alive, as The Outlook states, but that in the churches to the constituency of which The Outlook is chiefly addressed the doctrine of sovereign predestination is being openly denied by men like Harry Boer and James Daane. In fact, I dare say these men are disciples of Berkouwer and follow and agree with him in this regard.

Consider, in the third place, that Dr. Berkouwer in his work on Divine Election, with all his erudition and theological acumen, stabs at this cor ecclesiae, this heart of the church. For remember: this is precisely what Berkouwer and his disciples do! Their doctrine of election and reprobation is not the doctrine taught in our Reformed creeds and in Scripture. And even the criticism offered in Dr. Baker’s article makes this plain.

And then consider, finally, that The Outlook can after all say, in effect: Berkouwer is both friend and foe!Yes, yes, there are points to be criticized; even points subject to rather heavy criticism. He is a foe of the Reformed doctrine of predestination. He stabs at the very heart of the church. But at the same time, he is a friend! For he “has produced much that will enrich the church until the Lord returns.” Besides, “there is much to commend in Berkouwer.” And though he stabs at the heart of the church, nevertheless “in many ways . . . Berkouwer has done a work, in connection with election, that will strengthen the ever deteriorating marrow of theology.”

I like to believe that there are still men in Reformed Fellowship and in the Christian Reformed Church—however inconsistent they may be because of the First Point of 1924—who do not want to see their church follow the teachings of Berkouwer and his disciples.

But then I want to warn against the bland kind of criticism described above. You must recognize the foe for what he is, and sound an alarm in Zion. For with friends like Dr. Berkouwer, you don’t need enemies! 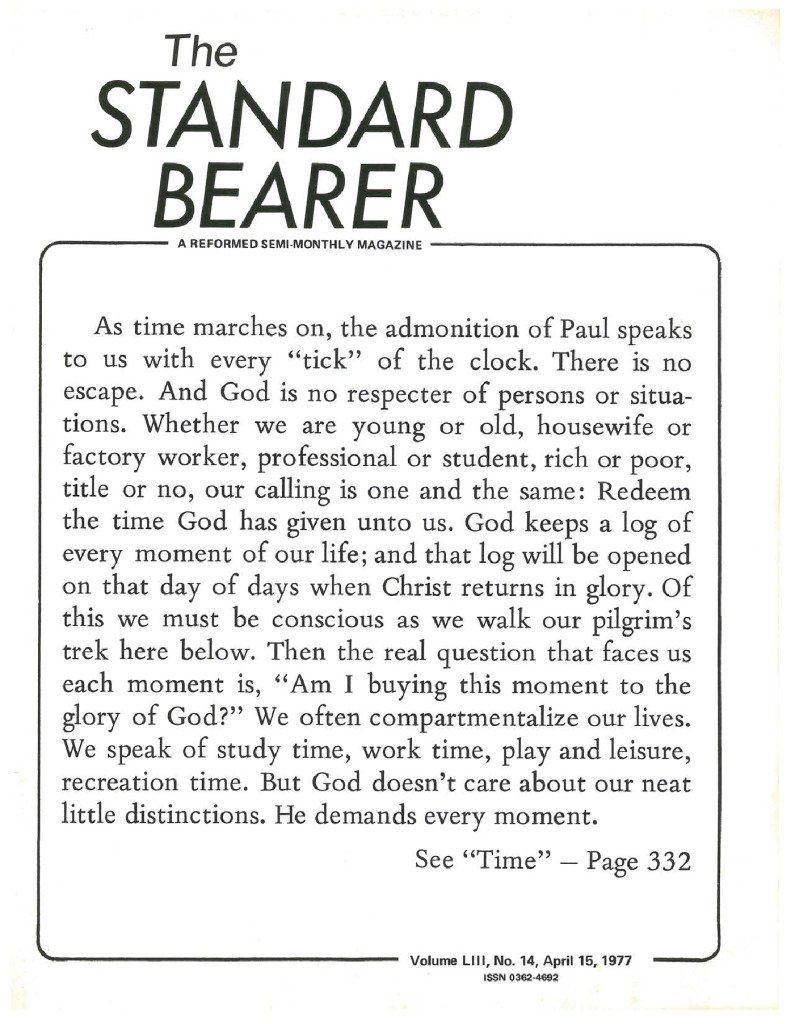