The Christian man understands well that true freedom is freedom from one’s own depraved reasoning. One is free when he is governed by Christ Jesus through the Word of God. God in Christ makes a man free from the prejudices found in the hearts of depraved men and from the deceptions of his own heart. Freedom is itself the gift of God’s grace in Christ.

The freedom we are considering is therefore religious freedom. Free to obey God alone. We have but one Master. This is not contradictory. For we do not imagine a freedom for the creature, man, that is absolute. Absolute freedom is God’s and His alone. The absolute freedom of God is His as the alone holy, righteous, sovereign over all. But man, who is the Creator’s dependent subordinate, is graciously granted a creaturely freedom in Christ Jesus. This freedom in Christ Jesus is the great blessing of salvation. Free not only from the guilt of sin, but also from the tyranny of depravity, from the bondage to Satan; free to will the good; free to obey the Master; free to serve our neighbor for the Lords sake and for the neighbor’s salvation. This freedom of grace is blessedness itself! “Then said Jesus to those Jews which believed on him, If ye continue in my word, then are ye my disciples indeed; And ye shall know the truth, and the truth shall make you free” (John 8:31-32).

Unbelief today is more and more characterized by a demand for absolute freedom in matters of religion and morals. Men claim a freedom to believe and do whatever may be their inclination in the pursuit of personal happiness. No divine prerogatives or institutions: are recognized. If a woman’s pursuit of happiness means the destruction of her unborn child, then nearly the whole of society in all western, so-called Christian countries vehemently defends the right and freedom of such an individual to terminate her pregnancy. Free to divorce at will; free to abandon the responsibility lovingly to care for and rear children; free to despise governments; free to impose upon the hapless employer the will of the laboring force; free to believe and to express said belief no matter how monstrous it may be. This freedom is limited by modem society only by its protection of one’s living, air-breathing neighbor. We may not impinge the rights and freedoms of the neighbor by our actions. The unborn, though living, have no such protection. This is not freedom but hellish bondage. Apostasy from the Sola Scriptura principle brings a fearful bondage to the proud individualist whose conscience is forced by sinful inclinations of the depraved heart. Collectively this is true for the whole of society. Man has deified his own conscience. Man is a god unto himself.

Ecclesiastically speaking, prior to the great Reformation of the 16th century, a similar bondage held fast those who desired to be saved. The Romish Church held the whole Christian church enslaved to its popish doctrines. One was called upon by the Romish Church to hold for truth whatever the church taught to be true, upon threat of the loss of salvation should he dare to contradict the instructions of the infallible and holy church. Rome’s appeal for this authority was not primarily to the authority of Scripture but to the authority of tradition. Her tradition, as expressed by church councils and papal decrees, was to be regarded as divine pronouncements. The doctrinal pronouncements that were found to be offensive by the reformers were not those common to the Christian church in all ages, but those that made the Roman Catholic Church uniquely Romish in distinction from the church of the apostles and early church fathers. The biblical doctrines of the eternal divinity of Jesus Christ, the Trinity, the infallible inspiration and authority of Scripture, the doctrine of Creation, etc. were not doctrines that made the institution of the church Romish. The Christian church ever held to these. But the popish doctrines made the church Romish, and these had to be believed in order for one to be saved. The authority of tradition demanded, upon threat of excommunication, compliance to and an implicit faith in the teachings of the church. These Romish or popish doctrines are: the mediatorial office of the Pope as the vicar of Christ Jesus, the ex-cathedra infallibility of the Pope, all the doctrines that pertain to her ludicrous Mariolatry, the prayers to the saints, indulgences, transubstantiation or the physical presence of Christ Jesus upon the altar, the Mass as a repeated sacrifice necessary to one’s salvation, the seven sacraments, purgatory, justification by works and faith, the obscurity or darkness of Scripture, the inability of the so-called laity to interpret Scripture, the Pope’s alleged supremacy and authority even in matters civil and governmental, and many other doctrines unique to Rome and which made the church Romish in distinction from Christian.

Rome’s doctrine of tradition is that it has equal authority to that of Scripture, and that tradition is also the arbitrator of the right and only acceptable interpretation of Scripture. This tradition is exclusively the tradition of the Roman Catholic Church. And Rome understands her church to have been the Christian church throughout the centuries. The government of the church and the determination of what is to be taught in the church is to be decided exclusively by Rome. The Council of Trent set forth Rome’s position in regard to the authority of tradition.

That Council, and the Latin Church as a body, teach on this subject, 1) That Christ and his Apostles taught many things which were not committed to writing, i.e., not recorded in the Sacred Scriptures. 2) That these instructions have been faith- fully transmitted, and preserved in the Church. 3) That they constitute a part of the rule of faith for all believers . . . . From this it appears, 1. That these traditions are called unwritten because not contained in the Scriptures. They are, for the most part, now to be found written in the works of the Fathers, decisions of councils, ecclesiastical constitutions, and rescripts of the Popes. 2. The office of tradition is to convey a knowledge of doctrines, precepts, and institutions not contained in Scripture; and also to serve as a guide to the proper understanding of what is therein written. Tradition . . . therefore, in the Church of Rome, is both the supplement and interpretation of the written word. 3. The authority due to tradition is the same as that which belongs to the Scriptures” (Systematic Theology, Hodge, Vol. I, pp. 109-110).

Rome’s doctrine of tradition is of several elements. The doctrine of the personal succession of apostolic authority of Peter to the Bishop of Rome, or the Pope. The church as the divinely guided interpreter of the obscure scriptures. The doctrine of the unwritten Word. “Tradition is always represented by Romanists as not only the interpreter, but the complement of the Scriptures. The Bible, therefore, is, according to the Church of Rome, incomplete. It does not contain all the Church is bound to believe; nor are the doctrines which it does contain, therein fully or clearly made known” (Hedge’s Systematic Theology, p. 106). Therefore, what the church taught, every Christian must believe. All else were heretics.

For example, we should consider the dreadful action of the Council of Constance. John Hus was burned at the stake in 1415, having been condemned as a heretic for demanding that Rome give the cup of the Lord’s Supper back to the people in the celebration of the Sacrament. His appeal was to Scripture, which records the Lord’s institution of the Lord’s Supper and the explicit instruction that the communicant drink all of it. But Rome condemned Hus on the basis of the authority of tradition. In addition, Hus had been a strong defender of the theology of Wyclif, the English reformer. Popish doctrines were defended by Rome on the basis of tradition. The authority of tradition provided the church of Rome the grounds for declaring him a heretic, even though he taught nothing that was not founded upon the Scriptures.

Charles Hodge sets forth the terrible consequences when tradition is exalted to equal authority to that of Scripture.

Making tradition a part of the rule of faith subverts the authority bf the Scriptures. This follows as a natural and unavoidable consequence. If there be two standards of doctrine of equal authority, the one the explanatory and infallible interpreter of the other, it is of necessity the interpretation which determines the faith of the people. Instead, therefore, of our faith resting on the testimony of God as recorded in His Word, it rests on what poor, fallible, often fanciful, prejudiced, benighted men tell us what is the meaning of the Word. Man and his authority take the place of God. As this is the logical consequence of making tradition a rule of faith, so it is an historical fact that the Scriptures have been made of no account wherever the authority of tradition has been admitted. Our Lord said, that the Scribes and Pharisees make the Word of God of no effect by their traditions; that they taught for doctrines the commandments of men. This is no less historically true of the Church of Rome” (p. 128).

Today the doctrine of the exclusive authority of the Bible is perverted and misapplied. Today the Protestant churches openly despise the concept of the authority of the Creeds in the life of the church. This attitude is found even within Reformed and Presbyterian denominations. Congregations are weaned away from a creedal consciousness on the ground that the only authority in the church of Jesus Christ is the Bible. No matter how often it is pointed out that the Creeds have a derived and subordinate authority and that the dogmas of the church are always subject to the principle, sola scriptura, men still resist the Reformed churches’ doctrine of the Creeds. The church institute is denied a systematic, authoritative statement of her beliefs on the ground that these are man-made documents and contrary to the sole authority of the Bible. Pastors promote a “Christian faith” that has no structure, no definite character, and little specific content. This is done in the name of love, toleration, and freedom. But this perversion of the Sola Scriptura principle flies in the face of history. The greatest defenders of the authority of Scripture were also those who encouraged the Reformation churches to express her faith in Creeds, and who appealed to the ancient ecumenical Creeds for a statement of the Christian faith. 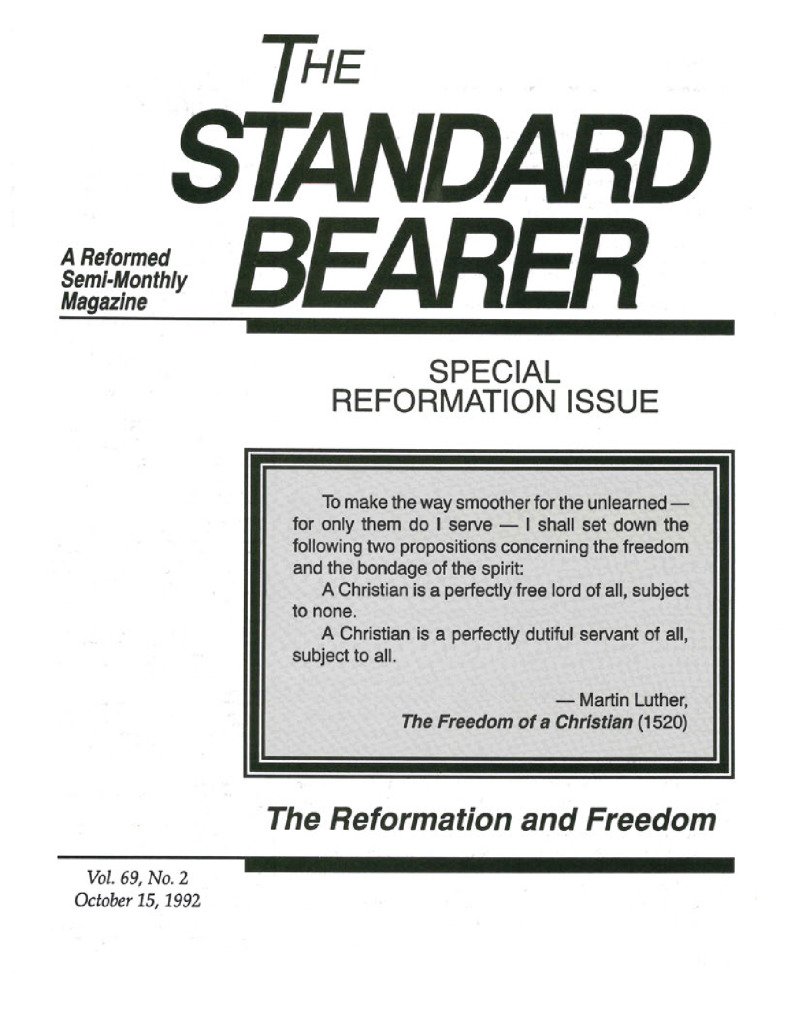