Foundational Principles (10): The cursing and liberation of the earth

Foundational Principles (10): The cursing and liberation of the earth

Before man disobeyed God, there was no corruption and death among the creatures of the earth. It was when man sinned that something happened not only to him but also to the earthly creation. The earth was cursed. The whole creation began to corrupt. Living creatures began to die. The creation as we see it today is not the way that it once was.

No death before the fall

From the book of Genesis and the rest of Scripture we know both of these facts:

2) None of the earthly creatures died until man sinned.

Those who deny the first of these teachings tend also to deny the second. Yet both of these are foundational. Believing them is of utmost importance.

The six days of creation were real days. No one reading the beginning of Genesis would come away thinking that those days were extremely long periods of time. At the end of the record of each day we are told that the day consisted of just one evening and just one morning. The phrase is repeated six times, which serves to stress the importance of our taking note of this. Further proof is found in Exodus 20:11, where we read that the seven-day week consisting of six days of labor and one day of rest was patterned after the seven days that God tells us about in Genesis 1 and 2.

Many argue that it makes no difference whether you think those days were single days or long periods of time. Yet it does. The long-period theory contradicts the explicit testimony of Scripture concerning those days. Furthermore, those holding to this theory usually maintain that animals were dying for many years before a man walked on this earth. Yet Scripture says there was no death in the world until Adam sinned.

When God created the world, He said that it was “very good.” In this good world there was no death. It was not until man sinned that death came into the world: “Wherefore, as by one man sin entered into the world, and death by sin” (Rom. 5:12a). “For since by man came death…” (I Cor. 15:21a).

By man came death. Before there was a man, death was not in the world.

The first paradise in Eden was a picture of the heavenly paradise in which there will be no death. Isaiah speaks of the new creation in the beginning of his prophecy:

And the cow and the bear shall feed; their young ones shall lie down together: and the lion shall eat straw like the ox. And the sucking child shall play on the hole of the asp, and the weaned child shall put his hand on the cockatrice’ den. They shall not hurt nor destroy in all my holy mountain” (Is. 11:7-9a).

Toward the end of his prophecy, Isaiah brings up this subject once again: “The wolf and the lamb shall feed together, and the lion shall eat straw like the bullock: and dust shall be the serpent’s meat. They shall not hurt nor destroy in all my holy mountain, saith the Lord” (Is. 65:25). In the new earth the lion shall not hurt in God’s holy mountain. It will not hurt man, nor will it hurt other animals. It was because of man’s sin that the lion hurts today. It was not like this originally in the earth.

John Calvin, in his commentary on Isaiah 11:7, was correct when he wrote:

For this reason, he says, that straw will be the food of the lion as well as of the ox; for if the stain of sin had not polluted the world, no animal would have been addicted to prey on blood, but the fruits of the earth would have sufficed for all, according to the method which God had appointed.

Death is an enemy. It was not present in the creation when it was first made. Nor will it be in the new creation when all our enemies will have been destroyed.

Why animals died when Adam fell

And unto Adam he said, Because thou hast hearkened unto the voice of thy wife, and hast eaten of the tree, of which I commanded thee, saying, Thou shalt not eat of it: cursed is the ground for thy sake; in sorrow shalt thou eat of it all the days of thy life; thorns also and thistles shall it bring forth to thee; and thou shalt eat the herb of the field; in the sweat of thy face shalt thou eat bread, till thou return unto the ground; for out of it wast thou taken: for dust thou art, and unto dust shalt thou return (Gen. 3:17-19).

Corruption now characterized the ground and the plants, and in this ground man himself would corrupt and return to dust.

There are other passages, such as the following from Hosea and Jeremiah, that refer specifically to animals suffering because of man’s sin:

By swearing, and lying, and killing, and stealing, and committing adultery, they break out, and blood toucheth blood. Therefore shall the land mourn, and every one that dwelleth therein shall languish, with the beasts of the field, and with the fowls of heaven; yea, the fishes of the sea also shall be taken away (Hos. 4:2-3).

How long shall the land mourn, and the herbs of every field wither, for the wickedness of them that dwell therein? the beasts are consumed, and the birds (Jer. 12:4a).

Plants wither and animals suffer and die because of the wickedness of man. This suffering and death go back to man’s first sin in the Garden of Eden. When we see all this withering, suffering, dying, and corrupting, we are to remember that this is due to our refusal to listen to our Creator.

Although corruption characterizes the earthly creation today, our Lord has promised that when He returns the creation itself shall be fully delivered from the bondage of corruption:

For the earnest expectation of the creature waiteth for the manifestation of the sons of God. For the creature was made subject to vanity, not willingly, but by reason of him who hath subjected the same in hope, because the creature itself also shall be delivered from the bondage of corruption into the glorious liberty of the children of God” (Rom. 8:19-21).

Christ, the ruler over all in heaven and earth, delivers not only His people but also the creation. We and the creation are safe with Christ. He has delivered us from the curse. The gospel we are proclaiming is good news not only for us but also for the entire creation.

So, as we look out at the creation today, we are to remember that it is very different from what it once was. Yet, we are also to view the creation in hope, believing God’s promise concerning how wonderful it very soon shall be. 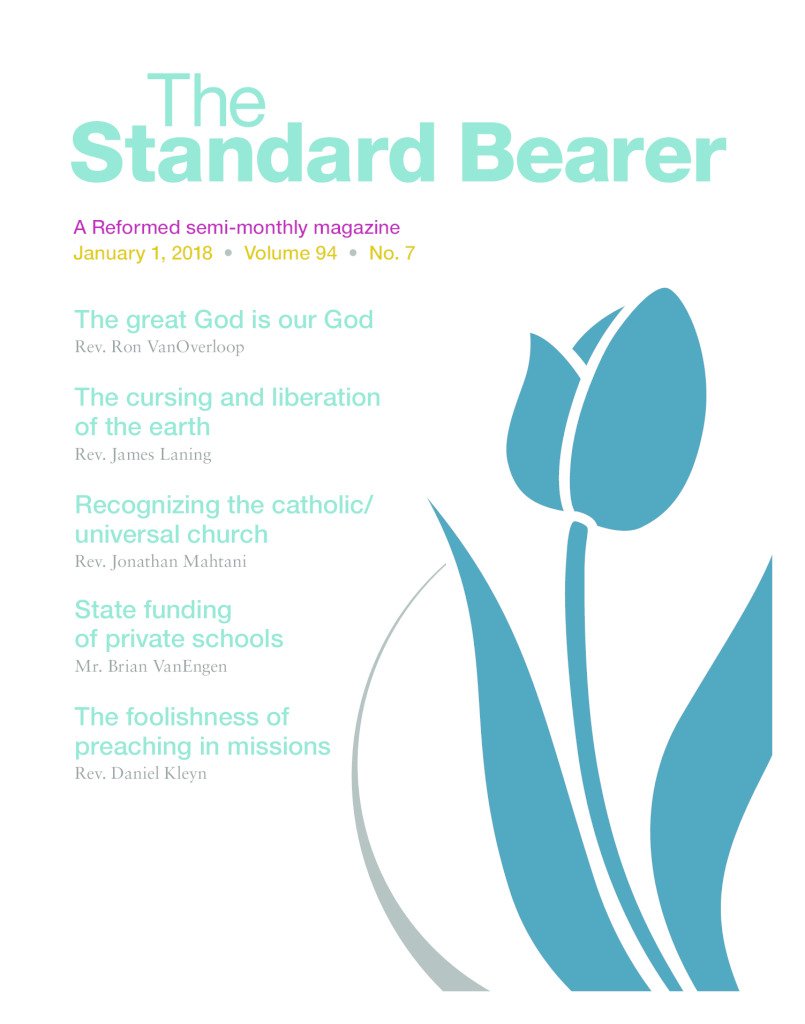