Found By A Strange People

Found By A Strange People

“I am sought of them that asked not for me; I am found of them that sought me not: I said, Behold me, behold me, unto a nation that was not called by my name.”

Jehovah, the God of the everlasting covenant, speaks!

In answer to the prayer of the remnant whom the prophet envisioned as being in Babylonian captivity!

The spiritual remnant bemoaned the sad condition of God’s people. There seems to be no hope for them. Listen to them pray: “Look down from heaven, and behold the habitation of they holiness and thy glory: Where is thy zeal and they strength, the sounding of thy bowels and of thy mercies toward me? are they restrained? Doubtless thou art our father, though Abraham be ignorant of us, and Israel acknowledge us not: all as an unclean thing, and all our righteousnesses are as filthy rags; and we all do fade as a leaf; and our iniquities, like the wind, have taken us away. And there is none that calleth upon thy name, that stirreth up himself to take hold of thee; for thou hast hid thy face from us, and has consumed us, because of our iniquities. But now, O Lord, thou art our father: we are the clay, and thou art our potter, and we all are the work of thy hand . . . Wilt thou refrain thyself for these things, O Lord? Wilt thou hold thy peace, and afflict us very sore?” (Isaiah 63:15ff; Isaiah 64:6ff).

But this restoration, this remembrance of His people will assume a different form than the petitioners could ever expect. For, while they are concerned over a nation whom Jehovah has rejected; God will be found by those who asked not for Him, who sought Him not. Of this the apostle Paul also speaks (Romans 10), referring exactly to our text and to its prophetic fulfillment.

Found by a strange people!

That, in itself, is a great wonder! God, the Invisible One, Who dwelleth in an unapproachable light; Who is Spirit, and must be worshipped in spirit and truth; Who is eternal, infinite, and who cannot be comprehended in a definition—that He should be found, that indeed is a great wonder!

But the wonder is even greater than that! For it must be plain that the text cannot mean that God is found merely in a general sense, as for example, He is found as the God of creation. So that even the Gentiles knew that He is and in a general sense Who He is. The text is not trying to tell us that in the old dispensation the Gentiles did not know of God at all; but that now in the new dispensation they also know that and who He is. For in this sense, God had always manifested Himself. He manifested Himself even to the extent of His power and divinity. He did so in the works of His hands. He did so also in the dispensation of His wrath upon all the ungodly. Always He showed Himself as the God Who must be served and thanked. But this is something quite different from the finding of our text. In the old dispensation the Gentiles never found Him in the sense of our text. To find God is a boon. It is something greatly desirable. It is a blessing.

He is found as the God of salvation!

In this sense He is not revealed in creation, apart from Jesus Christ. The things He made indeed reveal His glory, and no one beholding the things He made can deny that He is. But the language that proceeds from that creation after the fall is one of wrath. It has in it no hope for the sinner. And there is in it nothing that could induce that sinner to seek God. But in our text He speaks of Himself as the God of our salvation in Jesus Christ. This is evident from two sources. In the first place, the context makes this clear. It is Jehovah, the God of Israel, and therefore the covenant God speaking. His words are an answer to the prayer of the remnant of His people for the restoration of that covenant. He therefore speaks of Himself as the merciful and forgiving God, Who through the way of atonement will reconcile His people to Himself. But, in the second place, this is also evident from Romans 10. There the apostle had been writing throughout of the rejection of Israel as a nation and the salvation of the Gentiles. And the apostle, even quoting from our passage in Isaiah, reminds his kinsmen according to the flesh of Israel’s rejection and the reception of the Gentiles into the covenant of God. But notice also the text itself, how it makes this clear. God is speaking, and He says: “Behold me, behold me, unto a nation that was not called by my name.” And in the verse that follows our text: “I have spread out my hands all the day unto a rebellious people, etc.” It is true that these words are directed to carnal Israel. But this does not alter the fact that they show how and in what light God reveals Himself and how the Gentiles found Him. He manifested Himself as the God of salvation, who is gracious, merciful, and abundantly ready to pardon. And as such they that sought Him not, found Him.

The meaning is clear. Even as a father who teaches his child to walk, watches that child with outstretched arms, ready to catch it when it should fall; so God, in all His graciousness, pictures Himself as ready to receive and to forgive whosoever flees to Him for redemption. The outstretched arms symbolize the fulness of God’s revelation to us in the Lord Jesus Christ. Thus that revelation had been given to Israel of old, in His Word, through the prophets, and in signs, wonders, and the shadows of temple, sacrifices, etc. Thus that revelation had been perfected in Christ; Who is Jehovah-salvation, in His incarnation, in His death and resurrection, and proclaimed in the new dispensation through the gospel. The gospel is the revelation of God as the God of our salvation coming to us with outstretched arms, and ready to receive, and not cast out, whoever comes to Him.

That God of salvation is found!

It is the experience in which God is become manifest in all the beauty of His grace in the face of Christ. It is the experience of the soul that has heard and therefore responds to the efficacious call of God in Christ whereby he is become a new creation, which call God is also pleased to have uttered through the preaching of the gospel.

And by whom is He found?

Not by Israel as a nation, as some aver. It is exactly the observation of the apostle in his epistle to the Romans that with many of them God was highly displeased and had therefore rejected them. Is it not his lament that so many of his kinsmen according to the flesh have fallen out and are lost? A fact which gave the apostle no little concern. His people had received so much; for to them were given many things. “Who are Israelites; to whom pertaineth the adoption, and the glory, and the covenants and the giving of the law, and the service of God, and the promises, etc.” And he asked the question: Did God’s word fail somewhere? God forbid. Let God be true, and every man a liar. God’s Word did not fail. For they are not all Israel which are of Israel. And he goes on to say “Neither because they are the seed of Abraham, are they all children: but in Isaac shall thy seed be called: that is, they which are the children of the flesh, these are not the children of God: but the children of the promise are counted for the seed.” So that God made distinction that of all the children of Abraham according to the flesh only Isaac is called. And of the children of Isaac and Rebecca only Jacob is chosen. And the apostle calls attention to the prophecy of Hosea: “I will call them my people, which were not my people; and her beloved, which was not beloved. And it shall come to pass, that in the place where it was said unto them, Ye are not my people; there shall they be called the children of the living God.” And in chapter ten, the apostle elaborately referring to our text, explains that that strange people who found God is the Gentiles. O, indeed, also in Israel there was a remnant, according to the election of grace, that fled to Him and His outstretched arms, but carnal Israel was stiff-necked and rejected Him. Witness how this climaxed in the cross.

But never is the promise of none effect. Always God saves His people, and the remnant pleads for His mercy. Thus God saved His people even in the old dispensation. And this word of God is fulfilled according to the text also in the Gentiles. The contrast, therefore, in the text, is not between election and reprobation, though this is certainly involved; but the contrast is between Israel and the Gentiles.

The Gentiles, as “unto a nation that was not called by my name,” unto them God said: “Behold me, behold me,” and He was sought of them that asked not for Him, and found of them that sought Him not.

In that way they found Him!

But how shall the dead sinner ask, and seek, and find?

The God of our salvation manifests Himself to him. That: “Behold me, behold me,” is a life-giving word that makes the dead sinner alive, and at the same time reveals to that now living sinner the saving God as He is pleased to reveal Himself in Jesus Christ, the Saviour.

But there is more!

“Behold me, behold me,” is also the efficacious calling. Mere gospel preaching is not enough. This is evident in the nation Israel which had the preaching of the gospel in all its fulness. Only when that powerful, saving, and calling Word: “Behold me” strikes into the heart of the sinner, does that sinner who cannot and does not seek Him, find Him.

When that God of our salvation stands before you in the Person of our Saviour, the Lord Jesus Christ, and calls to you: “Behold me, behold me,” you will come to Him and find in Him all of your salvation—whether you be Jew or Gentile.

And thus God’s Word fails not! His house shall be filled! And all the glory will be His! 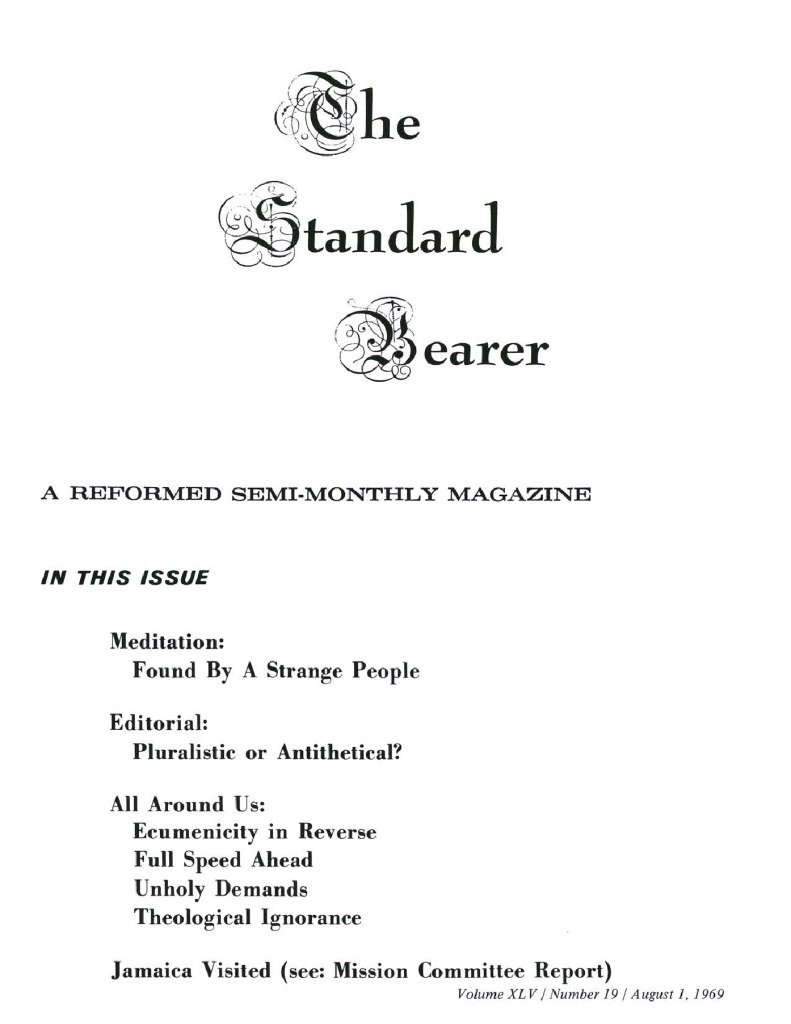