Fish Out of Water: Surviving and Thriving as a Christian on a Secular Campus, author: Abby Nye.

Fish Out of Water: Surviving and Thriving as a Christian on a Secular Campus, author: Abby Nye.

Are you attending college? Sending your child? Or preparing high school students for that next big step? If so, you are rightly concerned about the anti-Christian influences rampant there, and this book is for you. It presents difficult topics and biblical solutions in an entertaining, easy read. For that matter, I wish I’d had this author’s insight twenty-plus years ago at my Christian alma mater. Although the author attended a secular institution, her book capably addresses similar problems presented by modern Christian colleges. Her epilogue nicely encapsulates arguments for and against attending both. Whether secular, nominally Christian, or doctrinally mixed, the higher education available today requires saints to make special preparation. The author says it well:

You won’t survive as a Christian on a secular campus by simply being well versed on world views and different philosophies of thought…. The most critical defensive play needed on a college campus today is the ability to deflect the labels ‘judgmental’ and ‘intolerant.’

Having written this book as a college student, pooled the experiences of others, applied biblical principles, and researched current literature, she knows whereof she writes. She credits—and is a credit to—her journalist parents for this well-written first book.

A scan of the chapter titles gives a good overview. “Welcome Week” shows typical wry humor while describing morally offensive indoctrination methods: “Could it really be a coincidence that every Welcome Week activity had a strong politically correct undertow?” Some of her advice here brought a reminiscent smile: “If there’s not a grade involved, it’s probably not mandatory.” Each chapter models timely support parents can give, and includes her “Hindsight Advice” for prospective students. This sample resonated with me:

Even when you’re deflecting the half-truths and lies of moral relativism, make sure you’re friendly. Reach out to others…. Pray you gain wisdom at college, not just knowledge…. You’ll want something more than facts and figures at the end of four years.

“Behind Closed Doors” addresses the wildly-prejudiced behavior liberal professors have exhibited in their sheltered domains, and offers biblical responses. What if your paper is graded down for its Christian perspective? What about being told a recommendation to grad school would depend on your affirmation of evolution? “Pick Your Battles” is in some ways an answer to “Fear Factor”: are you one of the many who are afraid to speak up at all?

Beside expected topics such as “We Will Not Tolerate Intolerance” and “The Party Scene,” I was surprised to find “Posters and Pin-ups.” Perhaps this phenomenon is more recent than my college experience, or perhaps by not living on campus I overlooked this battle.

What’s the big deal about posters? In one sense, they’re not a big deal, but in another sense they are. Sure, they’re just pictures with slogans, but those pictures with slogans have a cumulative effect. They constantly, steadily, quietly promote an immoral lifestyle. It is a rear attack on morality. The attack may be a silent one, but it is a successful one in that it often has the end result of desensitizing viewers to morality and absolute truth. Week after week, the posters portray a message which eventually wears on one’s conscience. The posters paint a picture of the abnormal being normal and of sin being attractive, fun, hip, consequence-free, and desirable.

Surely an area for the Reformed student to apply the antithesis!

While some of Abby Nye’s language is not traditionally Reformed, her advice is essentially sound.

…the absolutely, positively most important thing on the ‘survive and thrive’ list at college is to plug into a church…. It doesn’t work to be a Lone Ranger Christian. You’ll be swept away and you will not grow spiritually unless you have the accountability and encouragement that comes from Christian relationships.

As an added bonus, an extensive resource section spans Internet, newsprint, and literature. Scripture references, though from various versions, are apropos. I believe that for most Christians, education to develop God-given talents is a calling. That being so, they will find this book a valued arsenal for battles both on and off campus. 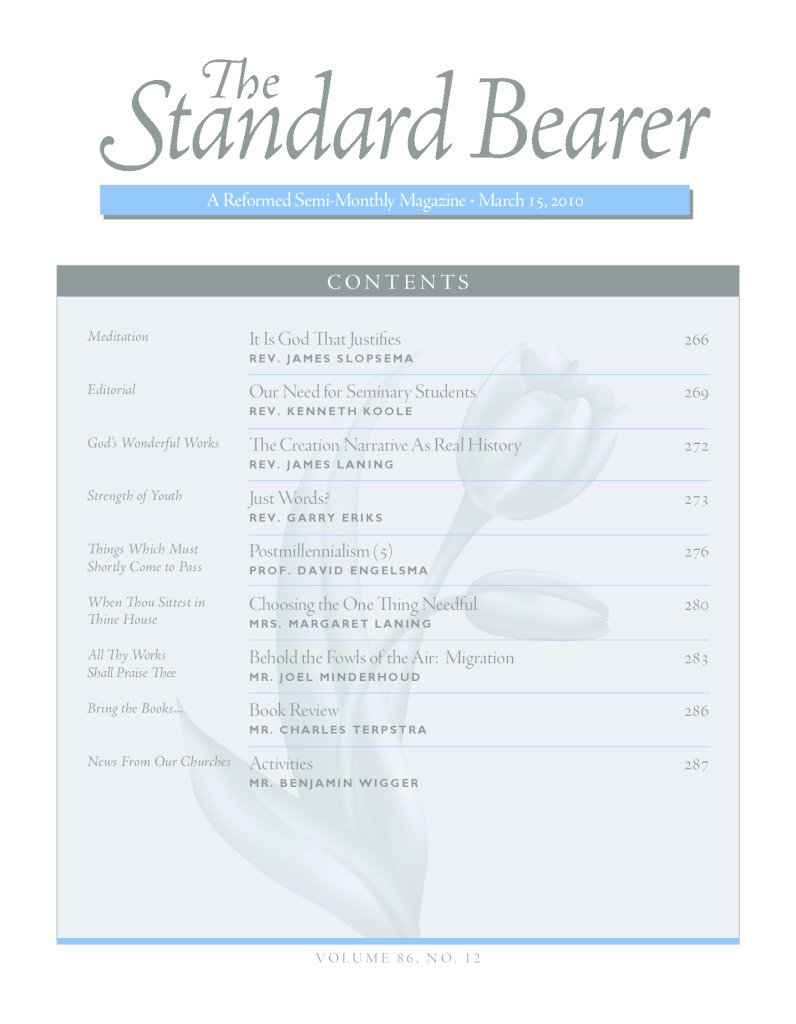