Fear Not, I Bring You Good Tidings of Great Joy

Fear Not, I Bring You Good Tidings of Great Joy

“And the angel said unto them, Fear not; for, behold, I bring you good tidings of great joy, which shall be to all people.” Luke 2:10

Joseph and Mary had finally reached their destination, but they found the city of Bethlehem full of people who were of the same lineage. There was no room for them in the inn. It is highly possible that their late arrival was because of Mary being long in her pregnancy. Sometime early in their stay in Bethlehem Mary “brought forth her firstborn son, and wrapped him in swaddling clothes, and laid him in a manger.”

Because this newborn child was also God’s only begotten and beloved Son, others had to be told. In addition to a star shining brightly in the far east, a heavenly host of angels proclaimed the tidings of great joy that night in a field near Bethlehem. While the tidings of great joy are for “all [kinds of ] people,” the only ones told by the angels were shepherd boys. The news of this birth would go out from them. They “made known abroad” (v. 17) the news of the birth of the “Savior, which is Christ the Lord.”

The shepherds of that day were usually early to mid-teenaged boys. The job of taking care of the family’s little flock of sheep was usually given to the youngest son, just as was the case with David.

A day filled with watching, leading, and protecting their little flocks was completed. Each of the shepherd boys had taken his small flock to different parts of the desert-like land in search of enough grass to satisfy the hunger of the sheep. When the sun was going down, they brought their flocks together to a common area where a pen had been established years before. With the sheep enclosed, the boys could visit together around a small fire until the weariness of the day brought them to find a night of rest—taking turns standing watch.

We know that these particular shepherd boys had been well taught to look for a Savior who is the Messiah, the Lord. The Spirit of God had been at work in them, so that among the topics of their evening conversations was Jehovah their God and Shepherd and His promises. We may be assured that it was not the first time that they glorified and praised God when they returned to their flocks later that night (v. 20). It was something they did regularly.

Suddenly, “the angel of the Lord came upon them” (v. 9). The brilliance of heavenly glory burst into the night’s darkness in which the shepherd boys had been quietly sitting. The blinding and dazzling splendor of the angel is “the glory of the Lord” shining “round about them” (v. 9). The angel, along with the multitude of the heavenly host, came from the presence of the holy God. The brilliant light of the angel was a mere reflection of the infinite beauty of the great and holy God in all His virtues. This is the glory of Him whose eyes are too pure to behold evil (Hab. 1:13).

This glory now surrounded the shepherds, and Scripture says that they trembled with a “mega” fear (v. 9b). It was a paralyzing fear! It was for them not just the fear of the unknown, nor of a great surprise, nor of a blinding brilliance. Rather, it was the fear of sinful mortals who are brought consciously face to face with the glorious holiness of the Most High God. They feared that they would be destroyed both because they were mere creatures and because they were horrible sinners. This brilliance penetrated their hearts and laid them bare before God’s sight, so they were deeply conscious that all of their sinfulness was laid bare. It exposed the deep and dark recesses of their old man. The revelation of God’s glory brought them to the final judgment, and they saw themselves eternally condemned.

The angel immediately urged them not to be afraid. The angel’s message was intended not only to remove their fear but especially to instill “great joy” into their hearts. The angel brought “good tidings of great joy” to these shepherds.

The good tidings often brought by politicians and, sadly, some preachers as well, is the good news of promises of deliverance from earthly troubles, that is, from crime, from diseases, from war, and from every hardship. Every Christmas you can hear it said that the sweet baby Child came to fill this world with love and kindness. But this only hides their great fear of meeting their Maker. Additionally, these kinds of good tidings hide the great Gift of God under piles of earthly, gaily wrapped presents.

But such tidings are at best temporary, and they certainly do not remove the fear instilled by the angel’s revelation of the glory of God! Such “good” tidings do not take away man’s greatest fear, namely, the sense of guilt with the fear of death and eternal condemnation. An even greater fear than crime or poverty is our folly, our corruption, our giving ourselves to unrighteousness.

The “good tidings of great joy” announces “a Savior, which is Christ the Lord.” The Savior did not deliver the shepherds from the miserable and lowly task of being shepherds. Nor does the Savior deliver anyone from their earthly circumstances. In fact, the Savior Himself came in great poverty! As an infant He was wrapped in swaddling clothes and laid in a manger. But the Savior does deliver from the greatest evil, earns complete forgiveness, and gives the highest good, namely, perfect righteousness in the sight of the holy and glorious God. This good news of the Savior from sin removes all dread of God’s wrath. It dispels all fears. The reason is that the Savior is the incarnate Christ. The Christ is God and man, and came into human flesh in order to redeem us from all of our sins. He delivers us from the power of the devil and makes us to be subject to Himself. The reality is that we belong to Him, body and soul.

His answer to our fears is to show us that God delights in mercy and has cast all our sins into the depths of the sea (Mic. 7:18, 19). He is gracious and dwells in fellowship with us in all His light and glory. The great joy is that we are forgiven! Our sins and all of our sinfulness are gone from the sight of God. We do not have to fear the judgment day. We are so righteous in Christ that God declares that we have the right to dwell with Him in all His glorious light, for He will make us to share in His light, so much so that His glory shall be revealed in us (Rom. 8:18).

This joy is “to all people.”

It is universal in the sense that it is to all kinds of people. Not just to the rich but also the poor. Not just to the old, but also to the young. Not just to Jews, but also to Gentiles. It is for harlots who repent, like Rahab. And it is for Moabites, like Ruth. It is to the elect out of every nation. And as such it comes to the lowly, uneducated shepherds in humble Judea. To the lowly and to the insignificant in society comes the message directly out of heaven.

And the glorious message of Christmas is personal. The angel brings the good tidings to “you,” that is, directly to you and to me personally. The Spirit takes this Word of God and speaks directly to you who know the guilt and shame of your sin. He speaks joy to the contrite and humble, to the weary and heavy laden. He comes declaring, “Fear not!”

Hear the good tidings of great joy that the Savior is born. Believe! And respond with an inner joy and peace. 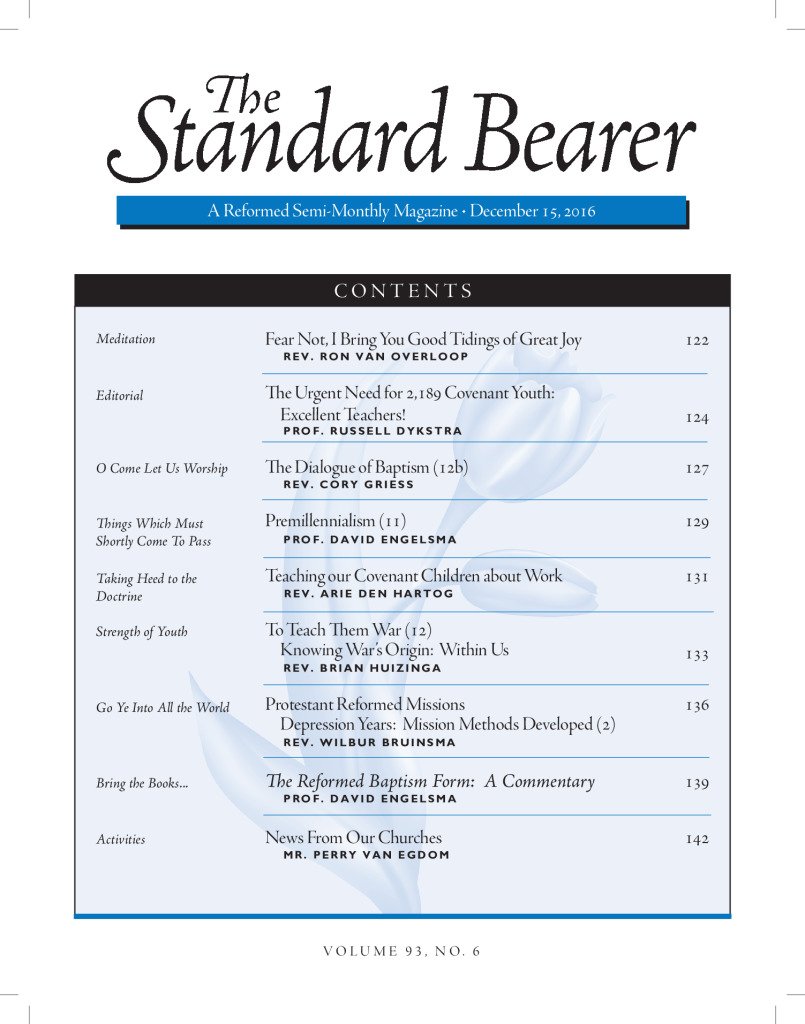