To go on with the state of the nation of Israel, 1.Guides for leading in the right way led them out of the way (v. 12). “My people! Harassers of it (come) from a boy, and women rule over it. My people! The ones leading thee cause to lead astray, and the way of thy paths they devour” (Heb., see Job 39:24). There are churches like this today. The minister is a playboy, or a woman “preacherette” holds forth with her Jezebelian “sensitivity training” program. Highly dangerous is this programming and conditioning of those submitting to “sensitivity training.” It is producing hordes of sex perverts, as mentioned in Romans 1. With “leadership” like this, the right path is swallowed up with not a trace of it left. The people could not find it if they looked for it. Where once the gospel was heard, now, with such blind guides, it is neither seen nor heard any longer. Under the administration of modernism, the gospel has completely vanished from such churches. Their leaders lead astray. The path which God himself has paved with His own Word they have destroyed. That path has faded away without a trace by the erroneous preaching of false prophets. As with the deadened church, so with our sin-drugged nation: it does not know where to go nor where it is going.

Isaiah is not talking about the literal rule of women over the nation, but rather of womanish, childish, effeminate men, debilitated and cowardly. The nation would rather blindly follow men who are of no estimation, more insignificant than children, who corrupt everything. They would rather slavishly bear their tyrannical burdens than to seek the way of the Lord, which alone is perfect freedom, and to walk in it.

2. Judges appointed to protect them oppressed them. “Jehovah will proceed with the elders of His people, and its princes, with justice; and ye have consumed the vineyard (of the Lord, His Church). The spoiling of the poor is in your houses. What (is it) to you (that) ye beat in pieces my people, and the faces (persons) of the poor ones ye grind, saith Adonai Jehovah Tsebhaoth” vv. 14-15, Heb.). The Lord brings judgment both on His people and upon the world. He proceeds in judgment against His people and the princes of Israel, as judgment must begin at the house of God. The rulers were chiefly responsible to warn the people against the punitive judgments of God, and to teach and lead them in the old paths and the right ways of the Lord. They were rich enough to be above bribes, with estates large enough to care little about coveting those around them. Yet, instead, they consumed the vineyard of the Lord. Not only were they not guardians of the vineyard as required to be, but they were not even good watch-dogs used to keep out cattle which might trample the vines. They were worse than a reckless goat in a cucumber patch. They were more like marauders who pillage and burn the vineyards (Ps. 80:15-16). They, being judges, thought no man had the right to be a judge of what they did, and that all men ought to approve and applaud their worst actions. And their worst was as bad as possible, for the kings of the earth set themselves, and the rulers took counsel together against the Lord and against His Messiah. They prevented the people from being gathered to Him. They beat the servants of the husbandman of the vineyard. They killed the Son and heir of the husbandman.

In the false, or in the fast-becoming-false church, there are leaders who have apostatized from the truth. They no longer conscientiously hold the doctrine and confessions of the faith, no longer take their ordination vows seriously. Nor do they go outside the church to reorganize a new church according to their heretical views, with their deformed confessions and deformed ordination vows. No, they destroy the vineyard by infiltration, by replacing the doctrines of the Bible and the confessions with humanistic philosophies, by exchanging the gospel of grace for a social gospel and by humanizing God and deifying man. Gradually the supernatural revelation and the pure preaching of the gospel are supplanted, so that soon there is nothing left but the poor word of man. A thorough and complete work of ruin they have done in many denominations, so that any faithful remnant, faithful to the Scriptures, to the confessions and to the Christ of the Bible, has found itself outside the church, or the church has so completely gone into apostasy and spiritual anarchy that no honest person can remain in it and be true to the Christ of Scripture and the confession of the true church.

So by infiltrating the true church and undermining it at its foundations (its doctrinal standards) false guides have perverted and subverted the church. It has never been their policy to withdraw in the battle for truth and to start a new church, reorganize from the ground up, but they plotted and captured the old church to turn it into a synagogue of Satan. Then those who have the right to its heritage, its offices, institutions and material possessions are forced to relinquish all out of conscience to Christ and His truth. They must go out of what is now the false church, start a new and continuing church with the old, original confessions and the unadulterated ordination vows.

John Horsch in his “Modern Religious Liberalism” writes, “That the denial of the fundamentals within the church necessarily means disaster is not open to argument. Liberalism rejects the supernatural character of Christianity. Natural religion alone is to find favor. It is, by way of illustration, as if that which our Lord has planted—the grapevines—should be suppressed, and that which naturally grows—the briars, burdock, milkweed . . . be permitted to take possession of the vineyard in the hope that ultimately the first fruit will surpass that of the grapevines. Everyone knows what will happen if that which nature is planting in the vineyard be given the right of way. The grapevine has no chance where that which grows naturally is tolerated. Both in morals and religion the good plants require cultivation, effort and care. A general toleration of all plants in the vineyard would be an absurd proposition.” (P. 310).

As in the days of the prophets and the apostles, the religion of Jehovah is despised and rejected by the turncoat leaders of the denominations, infiltrated with modernism-liberalism. The greatest enemies of the Christian faith are men who hold responsible position in these churches, using their position to flood the churches with the lie of their antichristian philosophies. Christ’s worst enemies were the ecclesiastical leaders in the religious body He was a member of by birth. In His day, the masses of the people followed their ecclesiastical dignitaries rather than the Carpenter of Nazareth, or the fishermen of Galilee, or the tent-maker of Tarsus. The apostate church has always despised the faith of Scripture. Now that harlot church is so vile and corrupt it-can never recover, but shall be utterly destroyed under the divine judgments of the seven seals, seven trumpets and seven bowls of the wrath of the Lamb of God.

3. God himself became the Prosecutor, Judge and Executioner. “The Lord stands firmly to plead a cause, and takes a stand to judge (the) peoples” (v. 13, Heb.). When times are as evil and wicked as they are in the world today, and especially as they are in our nation, the temptation is to suppose that God sits idly, doing nothing about it. The fact is, God is always executing His terrible judgments all throughout time, up to, and as well as at, the end of time. People in general may not care any more about anything. Nothing disturbs them. Nothing shocks them. Few bother to speak one word against any abuse or evil. But God daily judges the wicked by punishing sin with sin. It is a judgment on the nation that we have people in government, in the universities and in the schools with no morals, weak minds and useless lives. 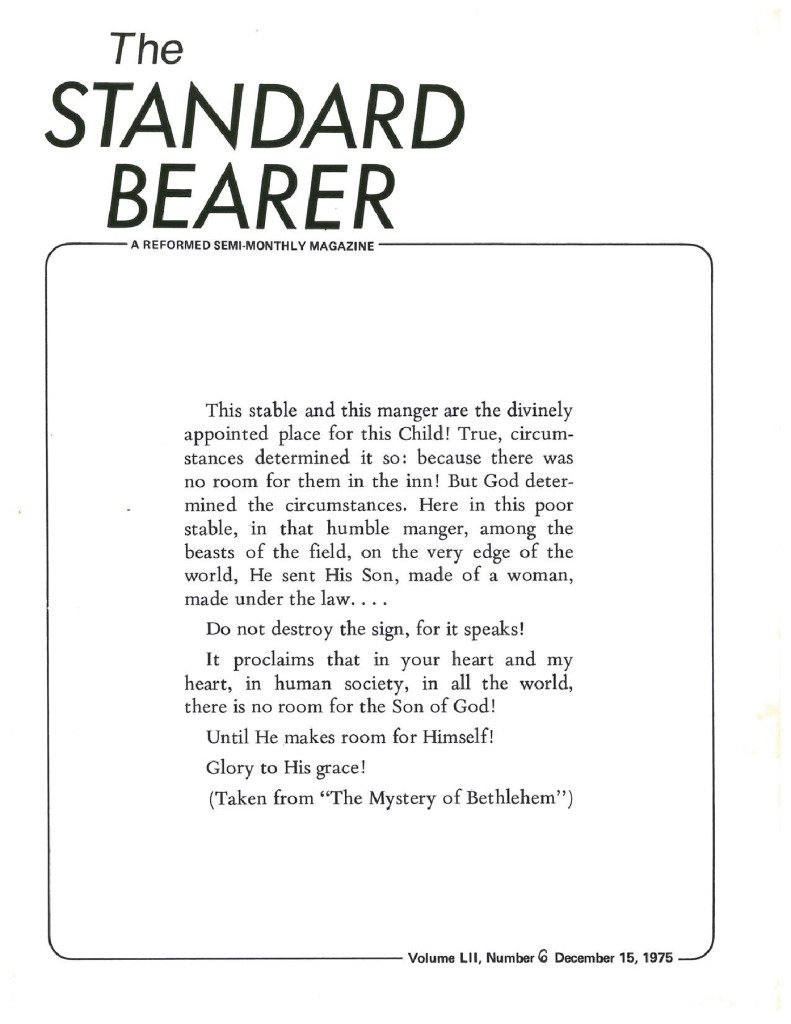