Exposition of the Epistle to the Galatians (1)

Exposition of the Epistle to the Galatians (1)

EXPOSITION OF THE EPISTLE TO THE GALATIANS (1)

Many excellent commentaries have been written on this great polemic of Paul to the churches in Galatia. It is not our desire to excel these worthies in the breadth of their vision, the acuteness of their insights; rather it is our purpose to offer a simple exposition of this letter so that the readers of the STANDARD BEARER may see the standard of faith and life for the Christian in the world held aloft, that the proper course of the Gospel may be pursued in our battle of faith.

Let it be well understood that Paul, in this letter, is waging a mighty polemic for the truth of the Gospel. He is not interested in his own person, his fleshy and worldly pride and self-exaltation, but he is interested in the well-being of the church of God. (Gal. 2:6) His sole concern is that the “truth of the Gospel may continue with you.” When we now set ourselves to write on this exalted and instructive letter, our prayer is that this aim of Paul may also be ours, and that we with Paul may finally say, “I have fought the good fight, I have finished the course, I have kept the faith, henceforth there is laid up for me the crown of righteousness. . .” (II Tim. 4:7, 8) That is our guiding consideration in this study; less we may not seek and more we cannot desire.

We ask only one thing from all the readers, for myself and for all who contribute to our various rubrics: pray for us that we may have boldness to write and teach the Word of God as we ought to do. We live in days when each day a minister of the Gospel does well to read and heed the charge of Paul to Timothy: “I charge thee in the sight of God, and Christ Jesus, who shall judge the living and the dead, and by his appearing and kingdom: preach the word; be urgent in season, out of season; reprove, rebuke, exhort, with all longsuffering and teaching, for the time will come when they will not endure sound doctrine, but having itching ears will heap to themselves teachers after their own lusts. . .” (II Tim. 4:1-3) We must hold to the “pattern” of sound words.

One thing more. Sometimes the readers are kind enough to write a word of real genuine appreciation for what one writes. Your appraisal and criticism are welcome, as is, of course, any positive criticism. Paul says, “and the spirits of the prophets are subject to the prophets.” (I Cor. 14:32)

Let us then now turn our attention to this letter of Paul to the Galatians. The issue at stake is the very heart of the Gospel. It was whether Christianity, faith in Christ crucified and risen, was sufficient or whether it must be supplemented by Judaism, that is, whether Jewish ceremonialism was to be added to the spiritual gospel of liberty as preached by Paul. The alternatives are either God or man!

The question should be asked: who are these churches in Galatia? In the letter itself Paul speaks of these Galatians twice, here in this text and in Gal. 3:1. The name “Galatians” is of interest to the Bible student. It is derived from the name “Galli” (Gaul) and “Celtic.” According to historians, cited by both Lightfoot and Meyer in their respective Commentaries on Galatians, these peoples came about three centuries before Christ to these regions in Asia from the West, from France and Spain, as a mighty warlike people, which subdued the nations, and dwelt in the land. They were an independent people till they were conquered by the power of the Romans. Historians speak of these Galatians as being worshippers of idols and that they were a very fickle people. There are two views held by interpreters, as to which Galatians these were. Some hold that these were the churches in “Southern Galatia,” the churches which Paul and Barnabas visited on Paul’s first missionary journey. It would then refer. to the churches in Antioch of Pisidia, Iconium, Lystra, and Derbe, in which journey Paul was stoned and must have received some of his “marks of the Lord Jesus in his body.” (Gal. 6:17) Others hold that these churches were in northern Galatia, which is really Galatia proper. The arguments for this presupposition one can read in Lightfoot and Meyer, in their Commentaries. There is an excellent article in the I.S. Bible Encyclopaedia, by George G. Findlay. Vol. I. If this view of the churches of the Galatians is correct, then these churches were the ones visited by Paul on his second Missionary journey, before he went into Macedonia in obedience to the man in the vision, who said, “Come over and help us.” It is of interest to notice that Peter calls Galatia a province next to Pontus, Capadocia, Asia, and Bythynia. Most ancient interpreters believe that these churches were in Northern Galatia, the territory invaded and conquered by the Galli some centuries before.

It should be remembered that the question as to who these Galatians were becomes quite clear from this letter itself at various points in the argument and polemic of Paul. We will not take the time and effort at this time to show this, but we will do so from time to time as opportunity is given. For our purpose they are “churches” of Christ Jesus, who had been called by the Gospel into the freedom of grace. They are no longer heathen, but they have come to know God, yea, they are known of God. (Gal. 1:2; Gal. 4:9) They have not yet wholly fallen from grace; they are still called “brethren.” That is the last word in this letter. (Gal. 6:18) But their position is, from the viewpoint of the error which is being preached in their midst, very dangerous and precarious. This is a matter of grave concern for the apostle. It is a “little leaven” which will leaven the whole lump. (Gal. 5:9) It is the principle of legalism, the weak and beggarly principles of the Old Testament laws and shadows. And that must be rooted out, root and branch. These brethren are in danger of falling away from the living God.

Paul’s salutation is geared according to this either or call of the hour. It is either the Gospel or it is law; it is works or it is grace. It cannot be both. Notice that Paul begins this letter with a veritable trumpet sound. In this salutation we have virtually the entire positive message of the Gospel, as we trust will become evident presently. It is the truth of the Gospel in a nutshell. It reminds us of what Paul said in Antioch of Pisidia, “Be it known unto you, brethren, that through this man is proclaimed unto you remission of sins, and by him every one that believeth is justified from all things, from which you could not be justified by the law of Moses.” (Acts 13:38, 39) Paul, even in this Salutation, is “set unto the defense (apologian) of the Gospel.” (Phil. 1:17)

As the particulars of this “salutation” we notice the following:

1. That Paul enunciates very clearly and emphatically that he is an apostle of Christ. He does not say that he is the apostle above all other apostles. He is anapostle. He has all the qualifications and credentials necessary for being an apostle. He mentions here the chief and basic consideration. He is an apostle by means of (dia) Jesus Christ himself, and that, too, very personally without the intervefition of men. He refutes most vigorously that his being an apostle is from (apo) men. Men as a class, in distinction from God, are meant. He has not an earthly calling but a heavenly. Nor has he been called to the apostleship through a man. God did not use a man to put him in office, as he did with Elisha through the prophet Elijah. (I Kings 19:16) The enemies of Paul are spreading the lie that Paul was not a real apostle, and that, therefore, his gospel was not that which Christ Himself had told him to preach. And now Paul as with a trumpet-blast insists that this salutation which he brings from God, he brings in the capacity and with the authority of a sent one from the throne of God and of Christ.

2. It should further be considered that the apostolic office was of supreme and pivotal importance in this entire apology for the Gospel of the Cross! The office of apostle is connected with the “foundation of our faith, of which Jesus Christ is the chief cornerstone. We live in a day when this office of the apostles is misunderstood if not outright denied. The Bible teaches that God has appointed offices in the church, “first apostles, secondly prophets, thirdly teachers, then miracles.” (I Cor. 12:28) The Bible tells us that Christ has given these offices as “gifts” for his church, as the One Who is exalted far above all the heavens, that He might fill all things. (Eph. 4:10) And these “gifts” are that “he gave some to be apostles, and some prophets, and some evangelists, and some shepherds and teachers.” (Eph. 4:11) Thus we speak of the first rank office of the apostles, which was given to the church. And this office we no longer have, except in the teaching of the apostles, as given to us in the canonical Scriptures. But Paul always writes as an “apostle,” second to none. Every letter begins “Paul, an apostle. . .”, except Philemon where he writes, “Paul, a prisoner of Jesus Christ. . .”

It is, true that Paul did not follow Jesus in His earthly labors as a disciple, and that he is not called one of the apostles by Jesus while the latter was on earth. (Matt. 10:2) Yet, he has all the credentials, as we said earlier. (a) One must have seen the Lord Himself. Paul rises to the occasion in I Cor. 9:1, saying “Am I not free? Am I not an apostle? Have I not seen Jesus Christ our Lord?” (b) He had been an eyewitness of the risen and glorified Lord on the way to Damascus, where he had been called to be an apostle of Christ. And he speaks of the fact that he had been caught up into the third heaven, where he heard “unspeakable words.” (I Cor. 12:1) He was not a wit behind the chiefest of the apostles. Let then the Galatians take notice of this letter!

To underscore the glory of his apostleship for the Galatians and for us, Paul emphasizes that the God and Father Who sent him to preach and teach is the very God and Father Who raised Christ Jesus from the dead. This brings his apostleship in the closest connection with the heart of the gospel. The Bible often says, “whom ye killed, God hath made him alive.” (Acts 2:24, 30, 32; Acts 13:33, 34) This is the fulfilment of the promise made to the fathers, and realization of what we read in Psalm 2:7, “Thou art my Son, this day have I begotten thee.” (Cf. Heb. 1:5; Heb. 5:5) And that is here inserted in this greeting for great and weighty reasons, as we hope to see further in our exposition of this epistle. For Christ was delivered for our offences, and He was raised for our justification. (Rom. 4:25) This is the very heart-beat of the justification by grace through faith. In this gospel we experience the peace of saying, “Abba, Father.” By this great God and His Christ, Paul was made an apostle, and in that deep consciousness of his calling he writes, as if in travail to have Christ formed in them. (Gal. 4:19) 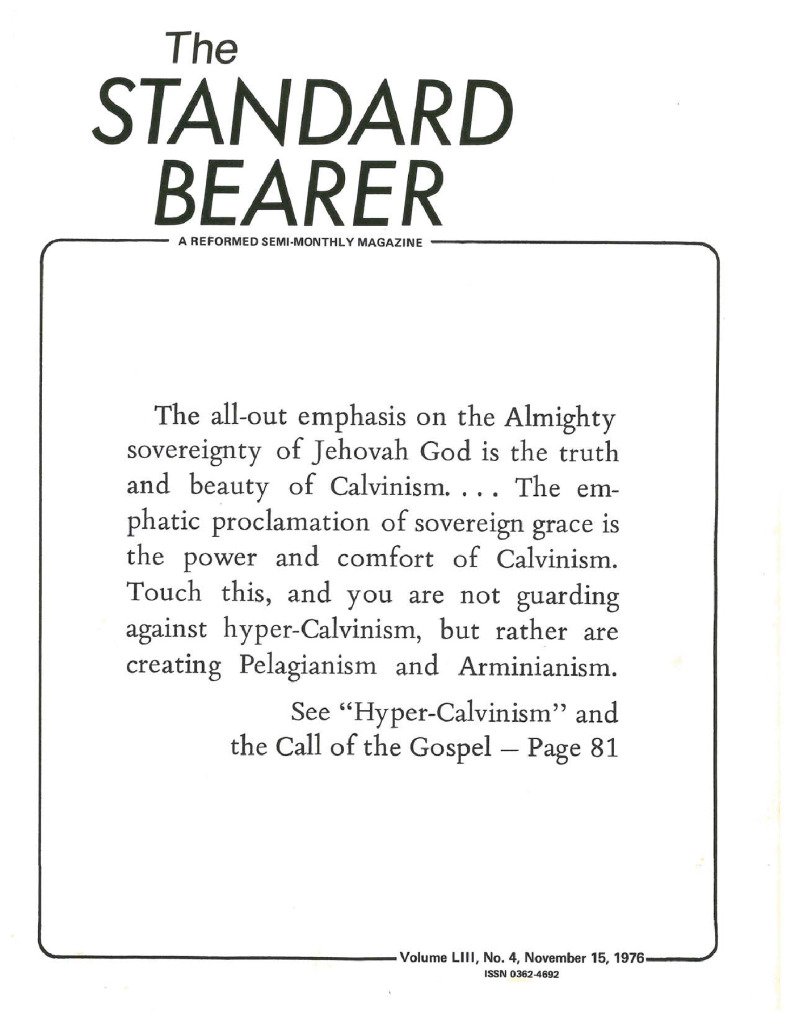