LOOKING AWAY TO THE RECOMPENSE OF THE REWARD (Heb. 11:26b)

The verb form here in the Greek is a composite of a verb with a preposition. It has a resultant meaning which it would not have if the verb stood by itself without the preposition, which is here apo. It is a preposition which indicates that it was “away from.” It was, therefore, looking away from one thing to something else. In this case we are told that Moses looked away from the treasures of Egypt, which were but for a short season, unto the recompense of the reward. It might seem that Moses made a foolish choice, that he would come out on the short end. And so it is ever with those who suffer for the sake of Christ in the world. It seems to be nothing but bitter suffering, to be ill-treated for the sake of and with the sufferings of Christ. However, that is not really true. Jesus tells us in Matthew 11:11, 12 that we must rejoice and be exceeding glad when such suffering is our lot: “for great is your reward in heaven.” And that blessedness was also the portion of Moses in his choice of faith. In faith and hope he looked away from this suffering to the recompense of the reward.

One day the books will be opened, then all shall stand before the Lord and His great white throne. And then Moses will receive his final reward, to dwell with Christ in the light in glory, having been faithful over much as a “faithful servant” (Heb. 3:1-6; Num. 12:7), and shall hear, “Well done, thou good and faithful servant; enter into the joy of thy Lord.” However, the faith of Moses is rewarded also in the greater responsibilities and privileges which he receives. He will be the one to lead Israel out of Egypt, and he shall stand before the Lord on the holy Mt. Sinai in Horeb. God will speak to him in the burning bush. And later God will speak to him face to face on this same mount, giving him the holy oracles.

This is the recompense of the reward which Moses saw and sought. Surely, Moses did not look at this recompense as a payment for service, a meritorious reward. He understood that it was all of grace—both the suffering with the people of God and the recompense of the reward. And thus it must be also with us. Such is the example of Moses which the writer to the Hebrews holds before them. It is faith as the substance of things hoped for. Such is the boldness of faith which has a great reward!

We now come to a new verse, which gives us another instance of the great faith of Moses, the man of God. Let us state at the outset that we hold that the writer here refers to Moses not as a mere individual, but as the called one of God to lead Israel out of Egypt to fulfill the promises made to the fathers. We will not argue the point here. We merely state our position. The text refers to the entire episode of Moses’ leaving Midian to go to Pharaoh upon the Lord’s bidding until the night of the passing of Moses out of Egypt at the head of the thousands of Israel. And in all this Moses’ faith shines forth brightly as one who walks as seeing the invisible God. God is back of Moses in all His mighty deeds and judgments in the ten plagues; Moses sees God in His invincible power and majesty, and he is fearless of the mighty king of Egypt!

Moses “forsakes” Egypt. Here, too, we have a composite verb. It means that Moses quit Egypt wholly and altogether. There is one thing that Moses and the people must never do: return to Egypt! This is a forsaking in being delivered. That is indicated in the composite verb which is translated in the KJV “forsook.” It is true that there are expositors who hold that this act of faith refers to Moses’ leaving Israel in flight after he had killed the Egyptian persecutor of his brethren. True, that was forsaking Egypt too; however, here we do not see the fearlessness of Moses, but the rashness of Moses’ act visited upon him. Moses had much to learn in the 40 years in Midian! He must be prepared yet by the Lord for 40 years to be such a fearless leader who walks as seeing the unseen God. He had to learn to walk alone with God. Patience and clinging to the everlasting unseen God in faith must be exercised by him, tending the sheep in the desert, where later he will lead Israel like a flock, as gently as a shepherd who carries the lambs in his bosom.

This fearlessness of Moses is his basic attitude toward the wrath of the mighty king Pharaoh, before whom he must represent the cause of Jehovah God and of His people Israel, His first-born son! (Ex. 4:22) Now surely, this fearlessness of faith was a gift of God. Moses did not have this stature of faith when he was tending his father-in-law’s sheep in the desert. It was here that the Lord appeared to Moses at the burning bush as Jehovah, the I AM THAT I AM, God Almighty, Who will be with Moses each step of the way and Who will surely fulfill His promise, which He made to Abraham concerning Israel’s deliverance out of Egypt. But Moses is very fearful and timid, Faith as the substance of things hoped for and the evidence-of things not seen is very weak in Moses. It is only when the Lord works in Moses’ heart this boldness that he sallies forth into the fray.

Here Moses speaks to the Lord. He seems quite meek at first; however, he finally even refuses to go to Egypt to deliver Israel. He has three objections, which all indicate a lack of faith and of seeing the invisible God. And this is so very true also to our lives! In the fast place, the fact is that all Moses’ hopes for delivering Israel as he attempted to do 40 years before are dashed to pieces. Moses had learned the basic temperament of Israel. They were a hard and stiff-necked people, as says Stephen before the Sanhedrin in Jerusalem many centuries later, reviewing the history of Israel in rejecting Moses and all the prophets. (Acts 7:51-53) Objects Moses: “The people will not hear me.” (Ex. 4:1) Secondly, Moses appeals to the fact that he, Moses, is not eloquent. How shall he be able to speak to the people of Israel and to Pharaoh? And, thirdly, he refuses to go! Such was the littleness of faith of Moses at this time here at the burning bush with the shoes off his feet.

No, shall Moses have the fearlessness of faith, then the Lord must give him this faith. He must give him signs from the “invisible and mighty God,” Who dwells in the unapproachable light of His own holiness and power. In the first place, the sign is that Aaron his brother will come to meet him. Secondly, he is given a sign in his own hand. He must cast his rod upon the ground, and it becomes a serpent. And his hand he must put in his bosom, and it becomes smitten with leprosy. And again, he must place his hand in his bosom, and it will become whole and clean once more.

This “fearlessness” to stand before the king is faith which God wrought in Moses’ heart by His word, signs, and the operation of the Holy Spirit.

Nothing which the king of Egypt does and utters in his wrath and hardness of his powerful will shakes the faith of Moses in the unseen God. It is good to take a little notice of this point in depth. And then it ought to be obvious that the issue is not really between Moses and Pharaoh, but between the Unseen One, Whom Pharaoh says he does not know, and Pharaoh. The issue is between Jehovah God and the idols of Egypt. Pharaoh must come to learn that he cannot any longer say, “Who is the LORD, that I should obey His voice to let Israel go? I know not the LORD, neither will I let Israel go.” (Ex. 5:2) It must be a complete crushing of Pharaoh; he must learn to say, “I have sinned.” Finally, God must come and smite all the firstborn of Egypt, both man and beast; against all the gods…of Egypt will the Lord execute judgment. The issue is clearly between Pharaoh and the Unseen God!

Hence, Moses feared not the wrath of the king. He will execute the Lord’s judgment upon Pharaoh. He will “endure” in his arduous and glorious task. Read how Moses brings three sets of three plagues upon Egypt. And in these the Lord will show His great power as the Unseen One. It will be the manifestation of His power and divinity. Pharaoh will first reluctantly say, “It is the finger of God.” But by and by he will ask Moses to intercede for him to the LORD!

See Moses stand at the beginning of each of the three series of plagues, meeting Pharaoh in the morning at the river. Before each second plague, see Moses standing before Pharaoh in his very court. And then notice Moses simply bringing each third plague unannounced. And see the devastating effect of these plagues. The first three touch creation, and thus touch the life of man a bit remotely. The second three touch man and beast in their physical existence directly. And the third three have a terrifying effect in the very soul, the marrow and bones of man. And the final blow is effected in the death of the firstborn of both man and beast.

And then see Pharaoh bow under the crushing blows! He gradually breaks under the sledge-hammer blows of the Almighty. Pharaoh does not repent, but he whimpers under the fearless onslaught of Moses’ “enduring faith” in the Unseen God! He breaks down more and more! At the second plague (frogs) he says, “Entreat the Lord . . . and I will let the people go.” (Ex. 8:8) And after the fourth plague (flies) he says to Moses, “Go ye, sacrifice to your God . . . I will let you go.” (Ex. 8:25-28) And after the seventh plague (hail) the LORD presses from his unrepentant lips, “I have sinned . . . entreat the LORD.” (Ex. 9:27, 28) After the eighth plague (locusts), in increasing tempo, Pharaoh pleads, “I have sinned . . . forgive . . . entreat.” (Ex. 10:10, 17) And, finally, after the ninth plague, Pharaoh gives up and says, “Go, serve the LORD.” (Ex. 10:21-27) Thus Pharaoh meets an unrelenting Moses who sees the Unseen God!

Moses endured the wrath of the king when finally Pharaoh said, “If I see your face again, ye shall die.” (Ex. 10:28) And then the fearless answer comes forth, and Moses has the last word, “Thou hast spoken well, I will see thy face no more again.” (Ex. 10:29)

Such is the fearless Moses, who forsakes Egypt at the head of the thousands of Israel! It is the great lesson and example of fearless faith which overcame all his littleness of faith at the burning bush! 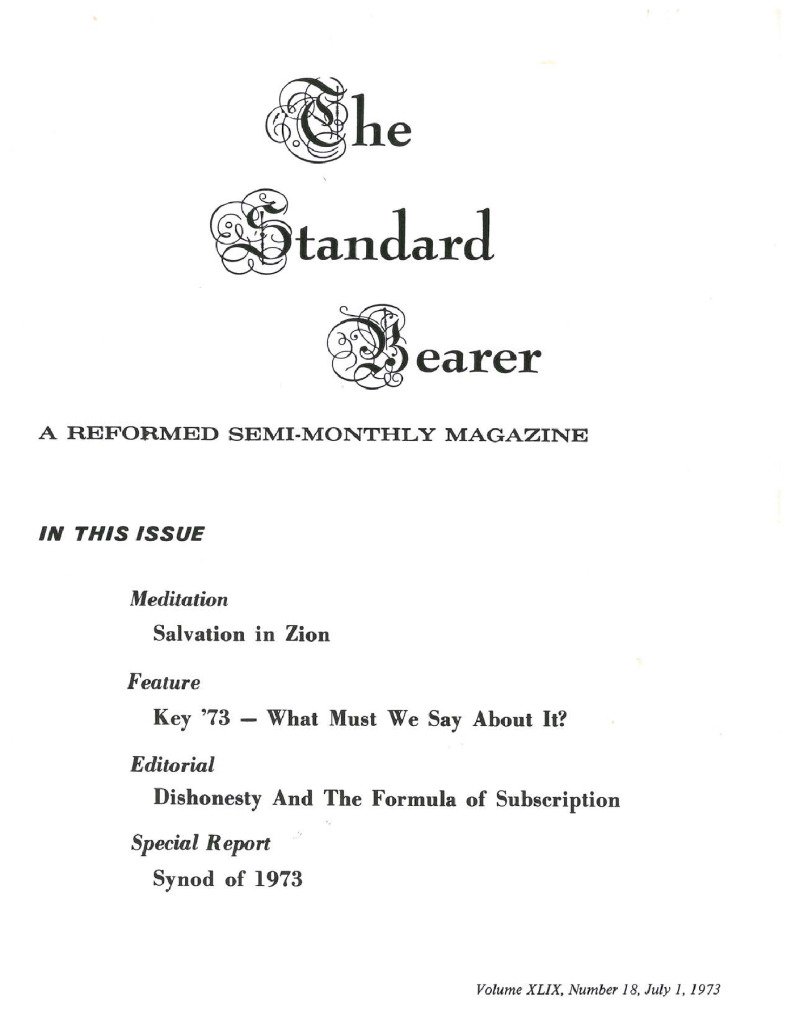