THE THREEFOLD QUESTIONS OF GALATIANS 3:1-5—continued

That Paul is indeed asking a very crucial question in verse 5 ought to be very evident to all who reflect a bit upon the meaning and implication of this question. It is so important that Paul can write, “Only this would I learn from you: received ye the Spirit by works of the law or by the hearing of faith?” How did grace and the experience of the grace of salvation and justification have its beginning and starting-point in their Christian experience? Upon this these “bewitched” Galatians ought to reflect and come to their senses.

There are two sides to this question: the subjectiveside of our experience and the objective side of God’s basic manner of operation. Paul calls attention to both of these. He does so in such a way that the manner of God’s supplying the grace of the Spirit is the final rule and canon in this weighty matter of salvation. Salvation is of the Lord. The subjective experience in this matter must and will agree with the objective manner of God’s working of faith and miraculous powers in the midst of the saints in Galatia.

Surely the Galatians received the Spirit by the hearing of faith. True it is, that, in order to hear, they already had the operation of the Spirit in their hearts by which they were made alive, and received the ability to believe. They were born again. If this were not true there could be no hearing of faith. Their hearing would not have been mingled with faith. (Heb. 4:2) However, Paul is speaking here of the active hearing of faith as this receives the preaching of Christ crucified for our sins, by sinners who are guilt-ridden, smitten in conscience, which needs to be cleansed from dead works to serve the living God. (Heb. 9:9, 14) Ever these worshippers of their horrible idols had been in the bondage of sin, trying to. appease their terrifying gods with their oblations and sin-offerings. But they had not received any benefits of pardon and forgiveness of sins in them. They only sank deeper in the bottomless mire of more sin and shame! Ever more they were in the bonds of Satan and the powers of darkness! What a plight of a helpless and hell-doomed sinner. They ever more gathered wrath unto the day when all the treasures of God will be revealed in His just judgment. (Rom. 2:1-5) But then the Gospel was preached on the Cross. A righteousness without law was preached, having the testimony of the law and prophets, the entire Old Testament Scriptures. (Rom. 3:21-25) And the Holy Spirit had enlightened their eyes, inclined their hearts to hear the good news; the arm of the Lord was revealed to them. And they consciously received the Spirit by this hearing of faith!

Of this wonderful experience these Galatians are reminded by Paul. It was the time when they received Paul as an angel from heaven and they would have plucked their eyes out and given them to Paul. The Gospel had become for them the pearl of great price, for which a man will sell all that he has to obtain it. And here they were hearing, “O all ye that thirst come to the waters and buy and eat; yea, come buy wine and milk, without money and without price.” These Galatians were the nations that would run unto Christ, because of the Lord their God. (Isaiah 55:1-5) O, these waters were so sweet! There was nothing in them of the bitterness of the Mara of sin. Peace with God through Jesus Christ, the Crucified Lord.

Surely, these Galatians had not received all these. spiritual blessings in heavenly places by “works of law.” This had all been of no avail. It had been for them as they were “without law” a perishing with the work of the law written in their hearts, “their conscience bearing witness, and their thoughts the meanwhile excusing or accusing one another.” But from law-works they did not receive the waters which flow from the throne of God and of the Lamb. (Revelation 22:1; Ezekiel 47:1-12.) Rivers of waters which are for the healing of the nations they had not received by works of law. Not a drop of the water of life was theirs from works of law. These are all cisterns that hold no water, broken vessels are these works.

Surely this is a crucial question, did you receive the plenitude of the blessings of the Spirit, as He takes it out of Christ, gives it to you, by the works of law or by the hearing of faith? And there can be but one answer for the believing child of God in Galatia and in all ages and times! The answer is loud and clear: by thehearing of faith alone!

But why by hearing of faith alone?

God is the “supplier of the Spirit” through the preaching of the Gospel and He makes this Gospel a power, wholly Divine, unto salvation in all who believe, the Jew first and also the Greek. There is a great “supply” in Christ. A fullness of grace and truth. (John 1:16) Out of this fulness have we all received: grace for grace. It is a fountain in Jacob, pure, fresh and thirst-quenching. But it all depends on the “One who supplies the Spirit.” The application of the work of Christ on the Cross to the sinner-elect by faith is entirely God’s work. That makes this question of Paul so binding on the conscience and so logically cogent in our reasonable service. Paul speaks of this great “supply” also in Philippians 1:19. It is grace abounding, greater than all our sins and guilt.

God does one thing more. Fact is, He had done some thing to confirm the manifestation of the Gospel-preaching in the midst of these Galatians. He had shown the “energy” (energoon) in the “powers,” signs, which had been wrought in the midst of these churches. These were for the confirmation of the Gospel, that the Lord had taken all our sins and diseases upon himself. (Matthew 8:17) There had been healings of diseases, speaking with tongues, interpretations, which revealed the almighty power of God in Christ in their midst to save. It was not the preaching of an impotent and helpless idol, but the manifestation of the living God in the working of His saving power.

How did God supply the Spirit and work these great powers in their midst and in their hearts?

Once more the cogent question is: out of works of law or by the hearing of faith? Which? Can there be any doubt?

For such a great benefit of salvation and by the very power of this faith the Galatians had suffered for Christ’s sake. They had endured reproach, scorn, and derision because they had found peace in the blood of the Cross alone. It is true that we do not read in the Book of Acts concerning this suffering. But Paul had told the congregation that “we must through much affliction enter into the kingdom of God.” (Acts 14:22) And Jesus told his disciples in the night in which he was betrayed, “In the world ye shall have tribulation; but be of good cheer, I have overcome the world.” (John 16:33) That is the determining way of God for His saints. We must suffer with Christ to be glorified with Him. (Romans 8:17; II Tim. 2:3, 12; I Peter 4:13; etc.)

Now Paul can hardly believe that such suffering was all in vain, that is, that they would not one day receive the crown of the reward and be glorified with Christ in His appearing. The “if it be yet in vain” suggests that Paul really believes the best while he fears the worst. He fears that it may be with these Galatians as it was with those who were sown in shallow ground in Jesus’ parable of the sower. These received the word anon with joy when they heard the word of the Cross, but they had “no root in themselves.” Such faith dureth but a little while, says Jesus. For when persecution arises because of the word, straightway he is offended. Now, Paul, does not know the hearts of these Galatians. He believes they are brethren. He hopes the best for them. Yet, he would bring them to their senses by calling attention to their unique suffering for the Gospel’s sake and for the truth of justification by faith alone so that they have peace with God.

It is ever good that we are recalled of better days of faith in our life so that we may take courage for the battle at hand and for what lies before us! Thus, through admonition and warnings and threatenings of the Gospel Paul will woo these Galatians, so that, once more, Christ may be formed in them. What a travail of soul for this faithful man of God!

THE GREAT FAITH-EXPERIENCE OF ABRAHAM CITED BY PAUL (Galatians 3:6; Genesis 15:6)

Paul will now begin this great exposition of the Old Testament Scriptures as these have direct bearing on the point at issue: receive the Spirit by works of law or by the hearing of faith. For what is written concerning Abraham in Genesis 15:6 is normative for the New Testament saint. Abraham is the father of believers, both of the Jew and of the Greek. (Romans 4:9-13) What Paul cites here concerning Abraham is applicable to both, the circumcision and the foreskin, Jew and Gentile. It is a remarkable thing that Paul simply assumes this to be true and that this is understood also by the Galatians.

When Paul therefore writes “even as” Abraham, he is connecting the spiritual father with his children. “For as many as be out of faith are the sons of Abraham.” With one stroke of the pen everything is set in the proper Scriptural perspective. This is masterful use of the Scriptures which cannot be broken, but fulfilled in their last jot and tittle. Abraham’s experience of faith is to be the universal experience of all. Such can not be said of other men in the church. Their name is not “father of many nations.” One may think highly of a Thomas a Kempis in his Imitation of Christ, or of a John Bunyan in his Pilgrim’s Progress, his Holy War, but it is not normative in the church, and it should not be suggested that such works are normative. Such men themselves must be measured by the Scriptures and what these teach concerning the experience of “believing Abraham.” Paul does not cite Jeremiah’s experience as reflected in his Lamentations. Not Jeremiah is the father of believers, but only Abraham. And he is the acknowledged “father” by Jew and Greek. (John 8:33-58; Acts 3:13; Acts 3:25; James 2:21, 23)

Well may the Galatian readers, and we with them, take special heed to what Paul will be telling us concerning the implications, the far-reaching consequences of what God revealed to Abraham under the stars of heaven when he appeared unto him as related in Genesis 15:1-6. When this is understood the most “bewitched” will come to their spiritual senses and, once more, see the false teachers for what they really are. They are the troublers in Israel. They preach a gospel which is not a gospel at all. They are worthy of the anathema of God, and to be assigned with the Devil and the false prophets to the bottomless pit of hell. (Gal. 1:8, 9; Rev. 20:10 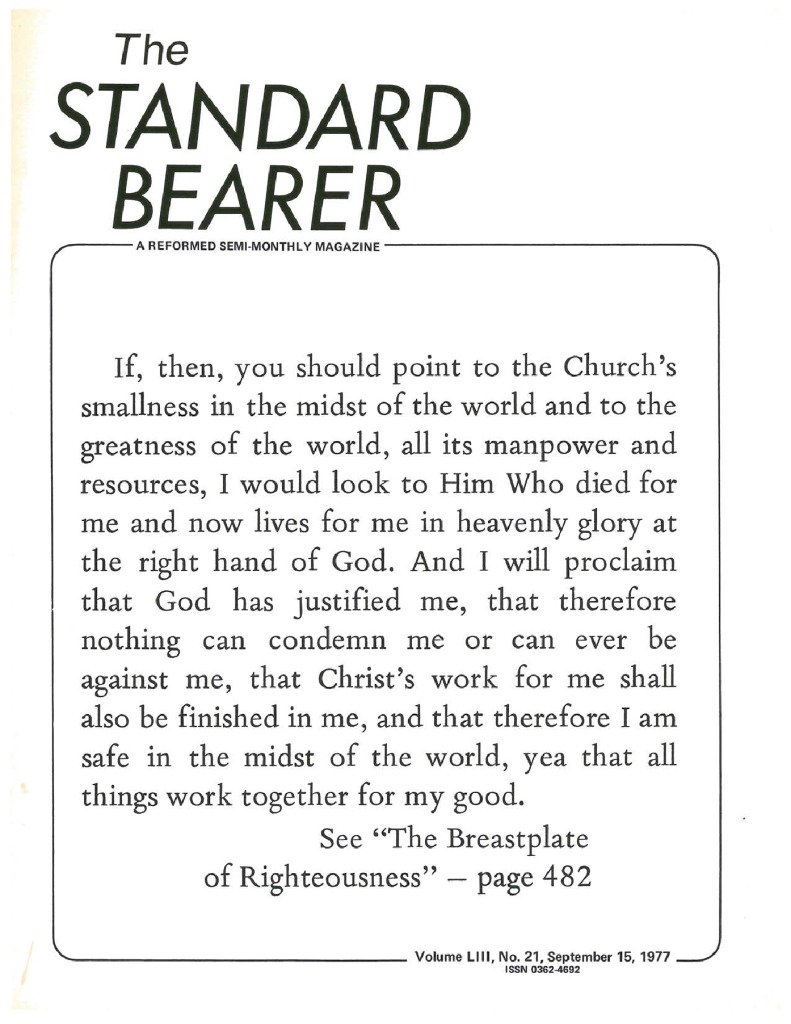