It is the intention of the writer of these lines to write a short series of expository articles on the passage written by Paul in Romans 6:1-14.

Since this passage is quite lengthy, and since we all have our Bibles near at hand, I shall not write it out in full. I shall merely write the beginning of it and also the concluding words of it. It here follows: “What shall we say then? Shall we continue in sin, that grace may abound? God forbid. We who died unto sin, how shall we any longer live therein? ….Even so also reckon ye also yourselves to be dead unto sin, but alive unto God in Christ Jesus. Let not sin therefore reign in your mortal body, that ye should obey the lusts thereof, neither present your members unto sin as instruments unto unrighteousness but present yourselves unto God as alive from the dead, and your members as instruments of righteousness unto God. For sin shall not have dominion over you: for ye are not under law, but under grace.”

In this article we intend to make a beginning of our study of this passage from Holy Writ. Our purpose is not simply to give exegesis, detailed exegesis of each word, phrase and clause in this passage, but we would give an exposition of the passage as a whole; we would thus treat the main thrust of the apostle’s argument here. In this way we will probably see more of the wood and a little less of the individual trees. Wherever we deem it necessary we shall treat a passage a little more in detail

Let us then proceed in our discussion of the Scripture passage in question.

It is, then, important to notice, that the Apostle is refuting a certain malicious, erroneous conclusion that someone might wish to draw from the great gospel-truth, namely, that “where sin abounded grace did much more abound, that, as sin reigned in death, even so might grace reign through righteousness unto eternal life through Jesus Christ our Lord.” Rom. 5:20-21.

Paul, we should notice, is here refuting the erroneous and the malicious conclusion. In doing so, the truth stands, that God added the law given at Sinai to the promise given to Abraham some four hundred and thirty years sooner, in order that the actual transgressions might abound. This fact concerning the intents and purposes of the law-giving in distinction from the giving of the promise to Abraham is not merely taught here in this passage but it is the classic truth taught by the apostle in connection with all that he says of our justification by faith alone. A hasty reading of such a passage as Romans 4:15, Romans 7:8, Gal. 3:19 will certainly convince the reader that this statement of Paul concerning grace abounding more where sin was more abundant touches the very heart of the gospel. However, the evil conclusion that we should then remain in sin that grace may abound, does not follow.

So much is the contrary true, that the apostle literally shouts: God forbid! It is utterly monstrous and horrible to place such a construction on the abundance of grace in relationship to the multiplicity of sin. No, that conclusion is as far from the truth as it is in Jesus, as the west is distant from the east. Paul’s heart and mind and soul cast this inference from them in utter disapproval. Nothing could be farther from the truth than that conclusion. It is impossible that they who are engrafted into Christ in a true faith should not bring forth fruits of thankfulness! Water always makes one wet, and fire always is hot and burns, a stone always falls by the force of gravity, and the believing and redeemed heart love righteousness and hate iniquity. A fish can only live in the water, and a bird only feels to home on the wing and nestled in the branches; thus also the man with living faith, who is not under law but under grace, can only feel to home in the keeping of the commandments, which has a great reward!

Paul does not first of all try to show the logical fallacy of this reasoning, but pointing out that there are certain elements in the major and minor premises of this reasoning that do not then come to their own, and that, therefore, the conclusion is logically unwarranted. Ah no, this is the outcry of life! Just as the real mother comes to manifestation before Solomon when he commands the baby to be cut in half, and as the^ real believer comes to manifestation when Jesus suggests to His disciples that they too leave Him with the multitude, so here the real deep impulse of the redeemed and believing heart reveals itself in this: God forbid! The inference stings the apostle to the quick! It is a heartthrob from a believing heart that pulsates with the life of Christ that we hear in this: God forbid!

Surely there must be more to this “God forbid!” than the mere subjective attitude of a man, be it that of a good man! It surely is not thus to be conceived of. This outcry is true in respect to the apostle, but that this does not yet imply that we here are confronted with the norm, the rule of all faith and conduct. Over against this we can place the testimony of the church of Christ throughout the ages as set down in Confessional statement. But what is more is, that the apostle here shows that the very genius of the Word of the cross demands this: God forbid!

It is not simply the subjective feeling of Paul; it is more than an attitude that we should “respect”, but which need not necessarily be shared by all who believe with the heart unto righteousness and confess with their mouths unto salvation. Indeed it is far more. It is based upon and is the outgrowth of the power of the death and resurrection in our life. It is simply living obedience of faith in response to the Word of the cross!

This “God forbid’’ is bedded in the Gibraltar Rock of the finished work of Christ Jesus in His vicarious death and in His triumphant resurrection out of the dead! Anyone believing in Christ shares in that work, and that work was a dying unto sin and a living unto God! Whoever wills not to see this simply kicks against the pricks of the reality of the cross as this reality confronts him in the preaching of the Word of the cross.

Well may we, therefore, write this “God forbid” on the doorposts of our house, keeping it ever before our eyes as a lamp unto our easily erring feet and as a beacon light upon our path as this shines more and more unto the perfect day! This “God forbid” is the truth and all the rest is the lie. It is the Gibraltar Rock; it is God’s righteousness as the only and sure basis of all of our salvation.

This Paul shows in the verses 2-14 of this chapter.

Legally you ask? Was the cross a legal matter in the court of God’s great majesty of justice and equity? Indeed it was. And by this payment of the ransom price by the fulfillment of all the just demands of the law we died unto sin! Legally we are no longer held under the law of sin and death. In God’s court the penalty of death for sin, and of sin unto death has been taken away, it has been disannulled and made void by the death and resurrection of Jesus. That is what it means that we have legally died unto sin!

We who have thus legally died unto sin, shall we still live as those who are doomed to servitude? All the past connection with sin and guilt has been forever removed from us in the death and resurrection of Jesus Christ; shall we now do and act and conduct ourselves as though this relationship of being doomed to sin is still in effect? Heaven and earth may and shall pass away, but the sure foundation of the Church built on the chief cornerstone stands. Christ has paid our debt by descending into the depths of hell; all the angels, who had stooped down to behold it, behold; the powers of darkness were here stripped of all their usurping power, the earth trembled, the veil in the temple was rent in twain from top to bottom. And Jehovah has redeemed us, His people, from all sin. He is our Goel, greater than a Boaz. Shall we then continue as those in the prison house of death in this acceptable year of the Lord? To ask this question is to answer it: God forbid!

Legally we are incorporated by faith into Christ by the activity of the Holy Spirit signified and sealed in baptism. By faith in Christ we realize that the prison gates have swung open wide to us. This is not a jail break. It is to be led forth through the prison gates in royal estate by Him who has taken captivity captive. This is the experience of faith. It is to share in the death of Christ as the payment for sin and in His resurrection as the glorious victory over death. Writes the apostle: “Or know ye not that so many of us as have been baptized into Christ Jesus, have been baptized into His death? Wherefore we have been buried with Him through baptism into His death, in order that even as Christ was raised out of the dead by the glory of the Father, thus also we should walk in the newness of life.”

Now, for soothe, who can walk in the repentance unto the forgiveness of sins, really hate sin and abhor self for it and still continue to walk in these sins. Can evil fruit grow on a good tree; can good fruit grow on a bad tree? Can a fountain both bring forth from the same source sweet water and bitter ? Thus also no one who has died unto sin in Christ by faith will want to walk in sin that grace may abound. On the contrary, while he tastes and receives of the grace abundant he hates sin. Rejoicing in the overflowing fountain of grace and forgiveness he cannot but flee from sin by faith.

Such is the true faith. It is a being buried with Christ in His death unto sin, and thus it is legally to live unto God. Shall we then remain in sin? God forbid!

Faith thus accounts itself legally dead unto sin, and legally alive unto God. And therefore faith is the only way in which we understand the true nature of the forgiveness of sins and life everlasting. He who truly confesses his sins knows what the injunction means: Go and sin no more! 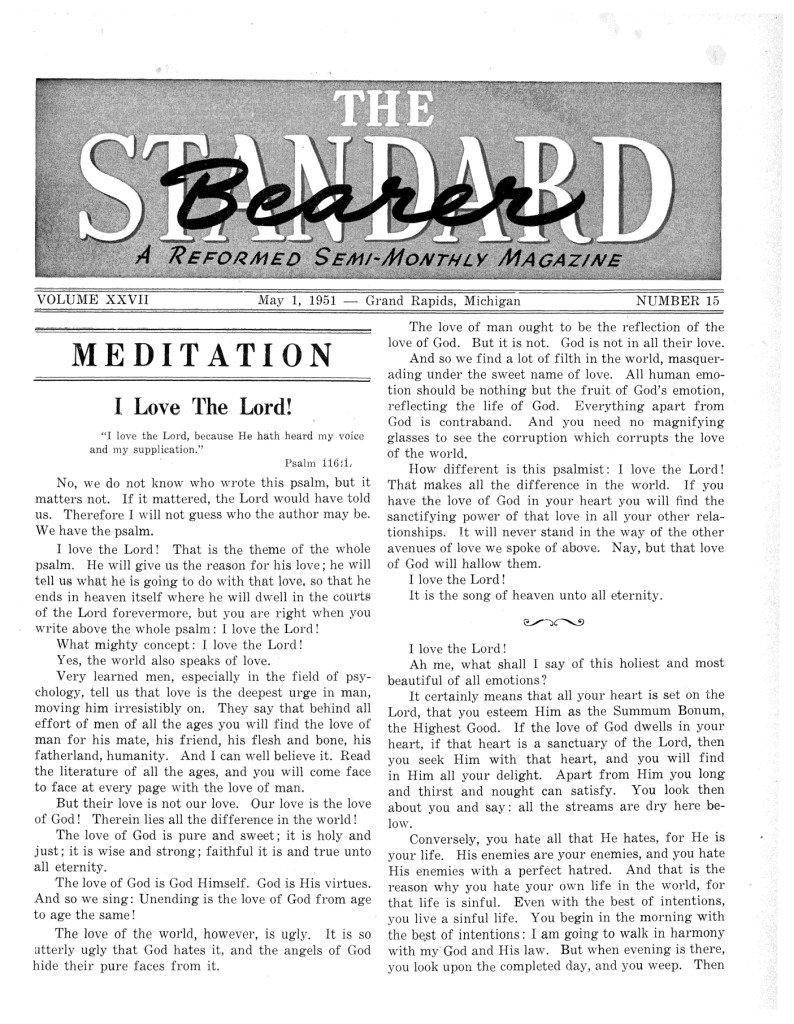