The main thrust of our former article on Romans 6:1-14 was, that the redeemed and justified believer indeed experiences, that where sin abounds grace does much more abound; however, this in no way establishes the erroneous principle of antinomism in the Christian, so that his life and practice is to sin in order that grace may abound, or to state it from the viewpoint of the believer: let us remain in sin in order that grace may become more abundant in our lives.

Over against all this we have seen that the very opposite is the truth of the gospel in Christ, and that the very opposite is also true in the redeemed child of God. It is impossible, that they, who are engrafted into Christ by a true faith, should not bring forth fruits in thankfulness for such great redemptive love! Such is the very outcry of faith. It is faith’s abhorrence of sin as it clings to Christ our righteousness.

That was the main thrust of our former article.

First of all we would remark, that although it is true, that in our former article we gleaned the truth contained in the verses 3-7 of this chapter to show the Christological background of this “God forbid”, we nevertheless did not enter into the teaching of these verses themselves. And, therefore, the task of giving a brief exposition of the Apostle’s argument still awaits us; we still must demonstrate from these verses how that it is utterly impossible from the standpoint of living faith to ever will to walk and remain in sin that grace may abound.

The verses 3-7 read as follows, “Or are ye ignorant that all we who were baptized into Christ Jesus were baptized into His death? We were buried therefore with him through baptism into death: that like as Christ was raised from the dead through the glory of the Father, so we also might walk in newness of life. For if we have become united with him in the likeness of his death, we shall be also in the likeness of his resurrection; knowing this, that our old man was crucified with him, that the body of sin might be done away, that so we should no longer be in bondage to sin; for he that died is justified from sin.”

In the first place, we should notice, that the apostle here asks a very pointed question; it is a question which would prove very embarrassing, if not worse, to anyone who would be necessitated to answer it in the affirmative. For soothe he, who would say: I was indeed ignorant of the implication of baptism, will feel that he has never understood as a living experience the passionate “God forbid!” of the apostle. Such a person has never felt the holy disapproval in his soul at the very suggestion of reveling in iniquity in order that forgiving grace might abound. Indeed, this question of Paul is arresting to say the least. It calls us to our spiritual senses! Then too there are various aspects of this question that we ought to study a bit more closely. We should surely notice, that Paul makes the matter of the believer’s attitude toward sin and grace from the very outset depend on reality of the truth as it is in Jesus, and of our new relationship to this Jesus, as we have been baptized into Him. Paul appeals not to the old man, he does not seek his point of contact with the “common rationality”, but he seeks the point of contact in the solid work of Christ. He seeks his point of departure in the reality that has come to be our portion in baptism. As many as we are baptized into Christ we have been baptized into His death!

The second element here in this argument of the apostle is that he refers to our having been baptized into Christ as tantamount to baptism into the vicarious and sin-destroying death of Christ!

We ask: what does the apostle mean here when he speaks of baptism? Does he refer merely to the rite of baptism, or does he refer to that which is signified and sealed in baptism?

To this we answer, that we are convinced that the apostle does here not distinguish between the symbol of baptism and that which it represents. It is important to notice this. The Holy Scriptures never “dogmatize” in the sense that we do. We always are inclined, with our learned (?) heads, to seek between the sign and the thing signified. That is what our “platonic”, our abstracting minds do. It pulls apart what God has joined together. And, let me add, that I believe that this is not only a great and vain evil under the sun, but it is a great evil of the theologians. However, Paul does not here thus dogmatize, neither does he thus theologize! Paul simply lets the sign of baptism and the reality of it stand in its unbroken unity. Shall we do so too?

Someone may say: but is it true then that everyone, who receives the rite of baptism, which obsignates the dying with Jesus, and the rising with Him in newness of life, also really is baptized into Christ and partakes by a living faith of all His benefits? I would answer: of course not! But I hasten to add: let us not get off on a tangent. Let us hew closely to the line drawn here by the Spirit-led writer. And then I would call attention to the following in this connection:

1.  I would make a couple of remarks of a negative nature. If it is true that Paul does not distinguish between the sign and the thing signified in this passage, then we must not come with the objection: but all who are baptized do not really receive the benefits of Christ. Such an objection is entirely beside the point from an exegetical viewpoint. Let us put that objection entirely out of our minds. On the other hand, we should also be careful not to read more into the apostle’s keeping the sign and the thing signified in its wondrous unity, than what the Holy Spirit intended.

a.  Paul is here speaking of the faithful church, the true believers, including himself as one in whom the grace of God became manifested. Says Calvin in regard to this matter in his Commentary: “Farther, it is not to the point to say, that this power is not apparent in all the baptized; for Paul, according to his usual manner, where he speaks of the faithful, connects the reality and the effect with the outward sign; for we know that whatever the Lord offers by the visible symbol is conformed and ratified by their faith.” Also Calvin regards the apostle as addressing the church as the faithful ones, who understand by faith the implication of grace, as this excludes the incentive to sin. Sign and thing signified belong together. Let us not pull apart what God has joined together.

b.  He is speaking of this faithful church as she has been not simply baptized, but as she has been baptized into Christ, and thereby baptized into His death. Someone may interpolate and say: there you have it! Sign and thing signified are not separated by Paul, and hence he who has the sign, the symbol, also has the things signified. But I answer: that does not follow, and what is more Paul does not say this. Let us not carry our hastily and erroneously drawn conclusions into Paul’s meaning. As for us, we believe that the text simply emphasizes the fact, that the sign and the thing signified in the case of everyone that is baptized into Christ by a true faith, means that he is baptized into the death of Christ.

From this vantage-point, from this solid point of departure the apostle can state what we read in verse 4, namely “We were buried therefore with Him through baptism into death; that like as Christ was raised from the dead by the glory of the Father, so we also might walk in newness of life.’’

The very opposite of walking, of continuing to walk in sin is the case with as many as were baptized into Christ. It means that we were buried with Christ through baptism. Through the operation of the Holy Spirit sin with its attendant guilt has gone into the grave. It is the proof that in our evaluation of self we have really died. And this is obsignated in baptism. Oh it was magnificent power that raised us up from the grave. It was the almighty power of God. For the almighty power of God brought forth Jesus from the grave. That power is the manifestation of the “glory” of God. Such a display of divine glory also was operative in us when we were spiritually brought forth from the grave with Christ. It is by virtue of this power that we walk in newness of life.

Of this we must not be ignorant.

Lest we be ignorant of this, we write on this truth. The more we are cognizant of the implication of our baptism, the more we shall also aspire to walk in newness of life. Being raised with Christ by faith to a new consciousness we shall surely seek the things above where Christ is. No one will then want to return to sin like the washed sow to her wallowing in the mire! 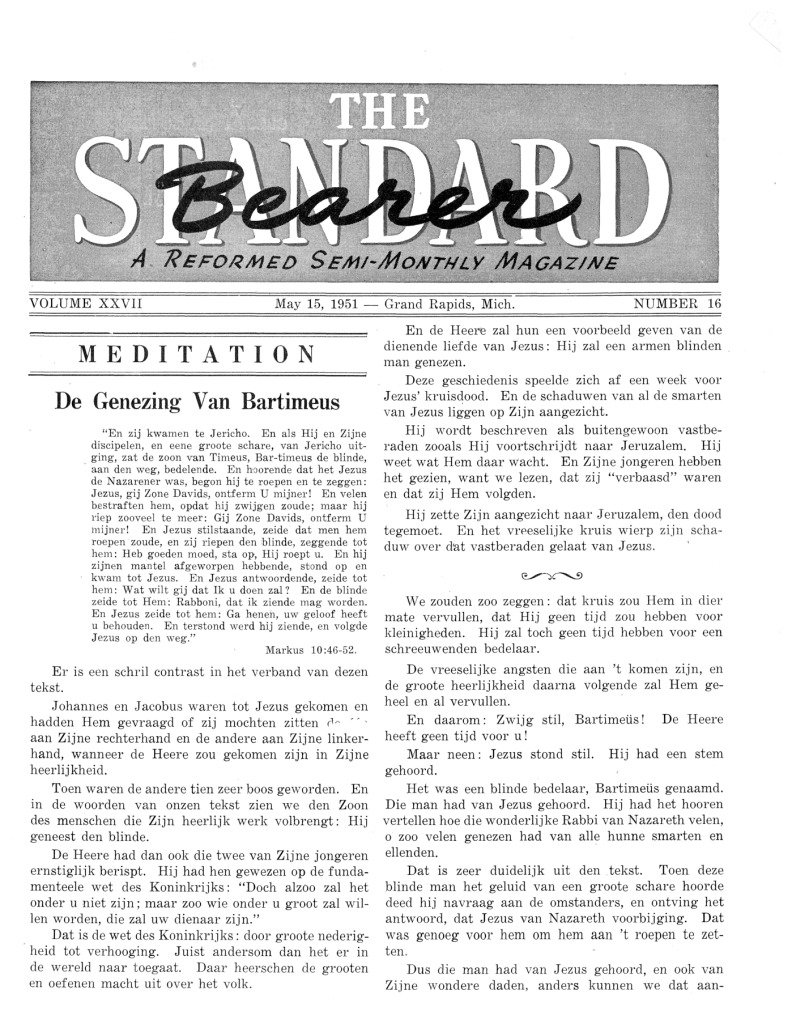