We have noticed, that, in the immediate context, Jesus states most emphatically that the “day” and the “hour” when the Son of Man Shall come in his “Parousia” is known to no one. And to this rule there are no exceptions. Among all the millions of men, the great and the small, there is not one who can state the exact date of Christ’s return. Even in the angel-world there is not one, not even Gabriel who stands before God, who knows the day or the hour. And, strange as it may seem, even the Son himself does not know this hour as to His human nature. He too lives in faith of that day and, therefore, as the chief prophet does not tell that day. This would be against the manner of the manifestation of the wisdom of God in the revelation of the Mystery of God’s will.

Only the Father, the triune God, Father, Son and Holy Spirit knows this day and hour of Christ’s return. Hence, ours is not the prerogative to attempt curiously to pry into this unrevealed Mystery of God’s will. Ours is but to live by the secret counsel of God as it has been revealed unto us, as being necessary for our salvation!

Our Scripture study deals this time with the verses 37-44 of this eschatological discourse of Jesus, recorded in Matthew 24. This passage reads as follows: “And as (were) the days of Noah so shall be the Parousia (presence) of the Son of Man. For as in those days which were before the flood they were eating and drinking, marrying and giving in marriage, until the day that Noah entered into the ark, and they knew not until the flood came, and took them all away; so shall also be the Parousia (coming) of the Son of Man. Then shall two men be in the field: one shall be taken and the other left: two women shall be grinding at the mill: one is taken and the other left. Watch therefore: for ye know not on what day your Lord cometh. But know this, that if the master of the house had known in what watch the thief was coming, he would have watched, and would not have suffered his house to be broken through, Therefore be ye also ready: for in an hour that ye think not the Son of Man cometh.”

The general thrust of this entire section is: Be yewatchful. Verse 42. And this element of the necessity of watchfulness is once more emphatically stated in verse 44, “Be ye therefore ready.”

Concerning the Scriptural idea of watchfulness we would notice that it is most emphatically a spiritualwatchfulness that is here referred to by Jesus.

This is evident, in the first place, from the meaning here employed by Jesus of the term itself. It is the verb greegoreoo. This verb is really derived from the perfect tense (egreegora) of the verb egeiroo. The latter term means: to raise one up, to rouse one. In the perfect tense it means: to be in a completed state of watchfulness, having been roused from sleep up till the present moment. Hence, a completed state of wakefulness!

As to the content and current usage of the verb to be watchful we notice that there are various passages in Scripture which shed a great deal of light on the spiritual-ethical nature of this watchfulness. It is a watchfulness which is rooted in godly fear, in childlike reverence for God. Thus, to cite a classic passage, we read in Hebrews 11:7 that Noah prepared an ark for the saving of his house, being “moved with godly fear. “It is rooted in the proper attitude toward God. Lack of watchfulness is always willful disregard of the word and warnings of God. Hence, watchfulness is certainly spiritual-ethical in character, an act of worshipping God!

The Scriptures in their usage of this term give a content of sanctification to this watchfulness. Thus we read in Rev. 16:15, “Behold, I come as a thief. Blessed is he that watcheth, and keepeth his garments, lest he walk naked, and they see his shame.” Watchfulness falls under a beatitude of Christ. One who is watchful is inwardly blessed, content, since he has been roused from sin’s stupor and spiritual drunkenness. In this watchfulness he fights against sin with a free and good conscience, and thus he retains his garments, the raiments of Christ’s righteousness. Thus he shall not be found naked, the shame of his sin will not be seen, for such a one is blessed of the Lord! In him sanctification is perfected in the fear of God. II Cor. 7:1.

It is, therefore, also a watchfulness of a living hope which is ours through the resurrection of Jesus Christ from the dead. Thus we read in I Peter 1:13, “Wherefore having the loins of your mind girt up, being sober, hope perfectly for the grace to be brought unto you in the revelation of Jesus Christ.” He who is watchful in hope will give heed to Paul’s admonition in I Cor. 16:13, “. . . stand in the faith, quit you like Men, be ye strong.”

From this we may conclude, negatively, that this watchfulness is not a morbid, excited watching and waiting for the return of Christ. This is no watchfulness which causes a man to sell his farm, and sit on the porch, watching for the return of the Son of Man! That is contrary to all the sobering teaching of Scripture. They who do not labor shall not eat. II Thess. 3:10, 11. We have an office and calling here in life which we are to attend to as faithfully as the angels attend to their calling in heaven. Heid. Catechism, Question 124.

That this negative conclusion is wholly warranted is evident from various elements here in Matthew 24 andMatthew 25. Will not two men be in the field in their earthly calling? And will the one that “is taken” not be busy in his “office and calling”? He is “watchful,” is he not? And, again, will not two women be at the mill? And will not the one that “is taken” be equally at her tasks as is the other. This too shows, demonstrates that watchfulness is a spiritual-ethical activity of sanctification and hope in the child of God, who is roused from all sinful stupor. It is a seeking of the things above, where Christ is at the right hand of God. And it implies the mortification of our members which are upon the earth.

We shall see more of this when we discuss the parables of Jesus, recorded in the sequence of this eschatological discourse of our Lord in Matthew 24 andMatthew 25.

The underlying truth which makes this watchfulness necessary is the element of surprise in the Parousia of Christ and His coming with the clouds: We know not the day or the hour! In this matter of surprise we have the objective as well as the subjective. However, that objective surprise element is not disastrous for those who are watchful unto prayer right in and through their office and calling in life. The disaster is for those who are “unprepared,” who do not heed the Word of God, but are held captive by the drunkenness and stupor of sin! There is a great deal of difference between Lot and his wife, not only after and during the destruction of Sodom, but equally before the manifestation of God’s righteous judgment upon. Sodom. Lot’s wife, evidently, never understood nor sympathized with her husband’s “being sore distressed with the lascivious life of the wicked” and with his “vexation of soul” over the lawless deeds of the Sodomites! Scripture leaves no doubt that here too the one is taken and the other is left! Both are surprised when God destroys Sodom. The one is delivered and the other becomes a pillar of salt! II Peter 2:7, 8; Gen. 19.

Thus it was also in the days of Noah, prior to the Flood, the cataclysm. See the difference between Noah and the men of his day. The one was moved by godly fear and the others flaunted the Most High God.

In these wicked men on Noah’s day there are evidences, by way of negation, what watchfulness is.

The lack of watchfulness, or the opposite of watchfulness is here in evidence. The dictum here is, as always in the world, “Let us eat, drink and be merry for tomorrow we die.” It was a time when, very evidently, men were mockers and scoffers of the Most High. It was a time when those who, had been under the preaching of Enoch and others, having their hearts fattened and their eyes blinded, rushed forward on the way to destruction. The time was one when the church went a-whoring after the world! It was a time of amalgamation of church and world, that is, of the wicked and false church with the world. The church was finally very small. Only eight souls. And God was very longsuffering over his people. Gen. 6:1, 2 and I Peter 3:20. God would save his church by means of the water and in the ark! He would save them from wicked men!

On the day that the doors of the ark were closed by God the banquet halls resounded with women, music and wine. Eating, and drinking, marrying and giving in marriage. Life went on “normally”! It is ever thus. God strikes as a thief in the night, when men do not expect it. How the horrible waters must have terrified those drinking and banqueting, giving a toast to Noah’s ark! But suddenly destruction falls upon them, as in a moment!

Thus it was when Belshazzar at his feast, drinking from the golden vessels taken from the house of God, and praising the gods of gold and silver, of brass, of iron and wood and stone, sees the finger of God, the hand, writing on the wall, “MENE, MENE, TEKEL, UPHARSIN.”

Yes, it was a surprise to the wicked. But not because the word was not clear. It was a willful ignorance!

However, these things are our examples to the end that we be warned and excited unto watchfulness, rooted in godliness. For these things happened unto them by way of example: and they are written for our admonition, upon whom the ends of the ages are come. I Corinthians 10:11.

We can learn from the example of a good man of the house. He did not know when the thief would come. Hence, his house was broken into. He was not ready.

We are to be ready. We, the people of God, are to be busy seeking the things above, where Christ is. All our labor is to be in view of the Parousia of Christ. Let the world send their false prophets. We will not hearken to them. We will look for “our Lord,” who has purchased us from all our sins with His blood and be comforted. And in all our sorrows and persecutions, with uplifted head, we shall look for the selfsame One, who before offered Himself for us, and removed all the curse from us, to come as the Judge from heaven, who shall cast his and all our enemies into everlasting damnation, but shall take us with all His chosen ones to Himself into heavenly joy and glory.

Unto that we are admonished to be watchful. 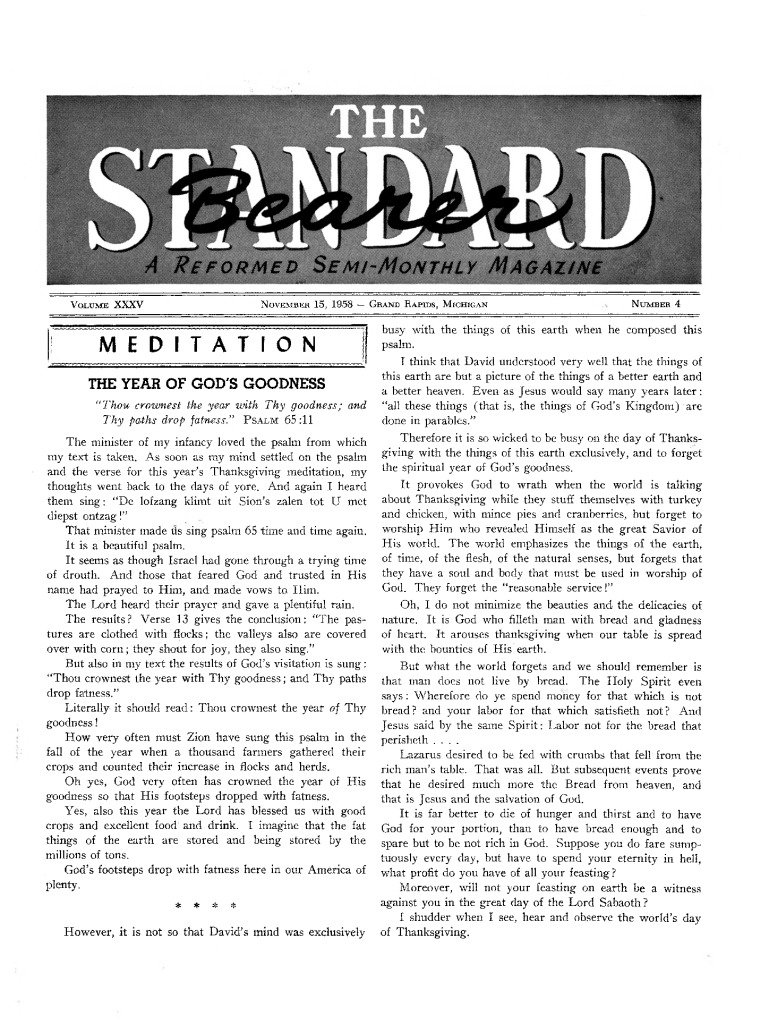