The Scripture passage to which we will call attention in this essay is too long to quote in full in view of the space at our disposal. Then too this passage is a familiar one to the average reader of The Standard Bearer. It will hardly be necessary to quote it m full. We will limit our quotation to the verses 3-6, where we the following: And the Scribes and Pharisees bring a woman taken in adultery; and having set her in the midst, they say unto Him, Teacher, this woman hath been taken in adultery, in the very act. Now in the law Moses commanded us to stone such: what then sayest thou of her? And this they said trying him, that they might have whereof to accuse Him.”

Concerning this passage of holy writ there has been a great deal of discussion. In the so-called lower criticism, or text-criticism the question is whether this passage recorded here in the gospel of John was really written by John himself, and, therefore, found in the original manuscript. Those who claim that it was not found in the original document from John’s hand are, in the main, of the opinion that a copyist copied it from the gospel written by the evangelist Luke. The reasons adduced for this text criticism is that this passage does not at all fit in this style, plan, framework and purpose of the gospel of John; that the very words and grammatical phrases are not those of John, but that it is the style of Luke.

We will not weary the reader any further with this matter of text-criticism, for it does not afford us a bit of fruit in the end whether we determine this question or not. We do not wish to fall in the class of those who busy themselves with the letter of the Scripture without understanding its great and glorious glad tidings of salvation in Christ Jesus. For certainly this passage is a unique part of the gospel story concerning the great grace and truth that have become a reality through Jesus Christ, our Lord.

It is the conviction of the writer of these lines that this unique passage of John 8:1-11 does not first of all intend to have all attention here focused on this wretched woman taken in adultery, in the very act. The subject in this passage is not first of all this woman. Nor must we think that the subject here in the hypocrisy of Scribes and Pharisees. It is true this is a part of the picture, but these Pharisees and Scribes are not the central figures in this picture.

We believe the central and all-controlling thought in this portion of holy writ is:  The greatness of Jesus, the Son of God in the flesh, when compared with the relative greatness of Moses.

The key toward understanding the entire gospel according to John is given us in John 1:16-17 where we read: “For of His fulness have we all received, and, grace for grace. For the law was given through Moses; grace and truth became through Jesus Christ.” This is the clear and lucid word, in the light of which we must also interpret the Scripture passage here in question. The Scribes and Pharisees contend with Jesus tempting Him and say: Moses in the law commanded us to stone such: but what sayest thou of her?

The contrast is: Moses and thou!

But the contrast is not correctly drawn as it is drawn by the Holy Spirit Himself, and neither is this contrast here made out of pure motives.

The motive is: to tempt Jesus in order to bring a formal accusation against Him before the Sanhedrin, the seventy rulers in Jerusalem! For had not the temple police returned, on the day prior to the day in which this matter here in question took place, empty-handed? Had they not said: Never a man spake as this man speaks! And were these evil Jews not verily at their wits end? Ah, how desperate and frustrated man must be who opposes this cornerstone of the temple of the living God. And so in their desperation they must play out Moses and Christ, denying both; now they will prove that they err knowing neither the Scriptures nor the power of God. They will now be caught in their own craftiness; they will now be pinned tightly between the horns of their own dilemma.

Moses commanded that such be stoned by us; what sayest thou of her?

Seemingly this is a very cleverly put proposition. It is one of the wiles of the devil, concerning whose purpose our Lord is not ignorant, nay not even in this generation of vipers. For thus these Scribes, who know the law (and we can well imagine them standing with the sacred scroll of Leviticus and Deuteronomy under their arms) must have reasoned: if he says: stone this woman, execute Moses, then He will raise public sentiment against Himself and then they would have cast a wedge, as they foolishly reason, between Jesus and those following Him. And if he should say: do not stone her they would have an airtight case against Jesus, that He was at variance with the expressed command of Moses that a woman taken in adultery should be stoned. Lev. 20:10; Deut. 22:22-24.

And the Pharisees who were forever attempting to establish their own righteousness by their works of law concurred with these Scribes; surely here was a woman who was from every viewpoint guilty according to the letter of the law; she is a woman who is taboo in the circle of these Pharisees.

They have a perfect case here in this woman; why she is taken in the very act! Eye witness they had been of this folly in Israel. And it must be removed out of the land! Thus spoke Moses. It is written in Leviticus 20. The Scribes knew the passage from memory and the Pharisees had painfully kept themselves from such an act, at least in public! But come now Jesus: what sayest thou? O, how persistent self-righteousness can be! These men keep on asking Jesus, and that too before a large number of people whose size seems to be steadily growing in numbers. All the while this woman stands here in their midst; shall we say that here was a snickering laugh and there the plaguing of an accusing conscience? But not yet in these men does conscience accuse; they persist: Come Jesus: what sayest thou of the woman?

Are these men perturbed that great folly has been committed in Israel? No “such as these” may well continue in their folly, if only Jesus may be condemned and put out of Israel as an imposter, a contradictor of Moses, a false teacher!

But who can stand before the presence of the Lord, Jesus? Who can stand before Him as He stoops down and writes in the sand? Yes, but wait till He rises and answers to their persistent questioning: He of you that is without sin let Him cast the first stone?

This Jesus is so relentless. No, Moses’ law is relentless. This law requires perfection. And Moses law says: the man that doeth the same shall live by it. Rom. 10:5; Lev. 18:5. Here must be the full measure or we perish under the wrath of God revealed from heaven against all unrighteousness and ungodliness of men who keep the truth down in unrighteousness. But since they want the law they must have the full measure. For works is truly works. Ah, now they stand in the flame of God’s holiness; and all the self-righteousness of the Pharisee melts like wax before the holiness of God’s law given through Moses!

Jesus writes on the ground.

But He has administered the Word and it is effective. God is opening the books of their conscience and they are deeply conscious that they stand condemned before God. And that too from the eldest to the youngest? Has God forgotten about this woman’s sin in this awful moment? Ah, simply wait a bit; her turn will come presently. But these men are convicted by their conscience and stand condemned before the tribunal of God!

He that is without sin cast the first stone!

O Moses, Moses, who can execute thee? Who can give the full measure that is required by the law given through thee?

But Jesus demands the full measure: All must be without sin, and unless this is done none can live and wrath shall come upon Israel’s folly, and all go down into silence of captivity in Babylon! Before thy sight Lord, no man is justified; O, enter not into judgment with thy servants!

But must Moses not be fulfilled? This woman still stands here in the midst of the people. Must not he, who is without sin, cast the stones? O God, the dilemma is so terrifying! Moses has said: that such we must stone. Lord we cannot cleanse the land, we cannot remove folly out of Israel, for we all perish under the just demands of thy law. Moses must be fulfilled; what sayest thou Lord Jesus.

Throw the stones Jesus, for thou canst say: Who of you can convict me of sin. But Jesus says: I want the full Moses; the full measure of all the stones. However, I did not come to throw the stones, but to come under all the execution of the righteous judgments of God, to pick up and carry away the sins of my people.

Woman, where are these thine accusers; has no one accused thee?

Neither do I! I have come to fulfill the law and the prophets. Moses’ law will receive its own. Grace and truth become through me. Go and sin no more. Drink out of my fullness from the never ending streams of mercy and grace and ye shall find rest for your souls.

Great is Moses, a servant in the house of God; faithful he was. But he could not bring you into the land of Canaan. I am the Son, the builder of the house, the end of the law for righteousness to every one believing! 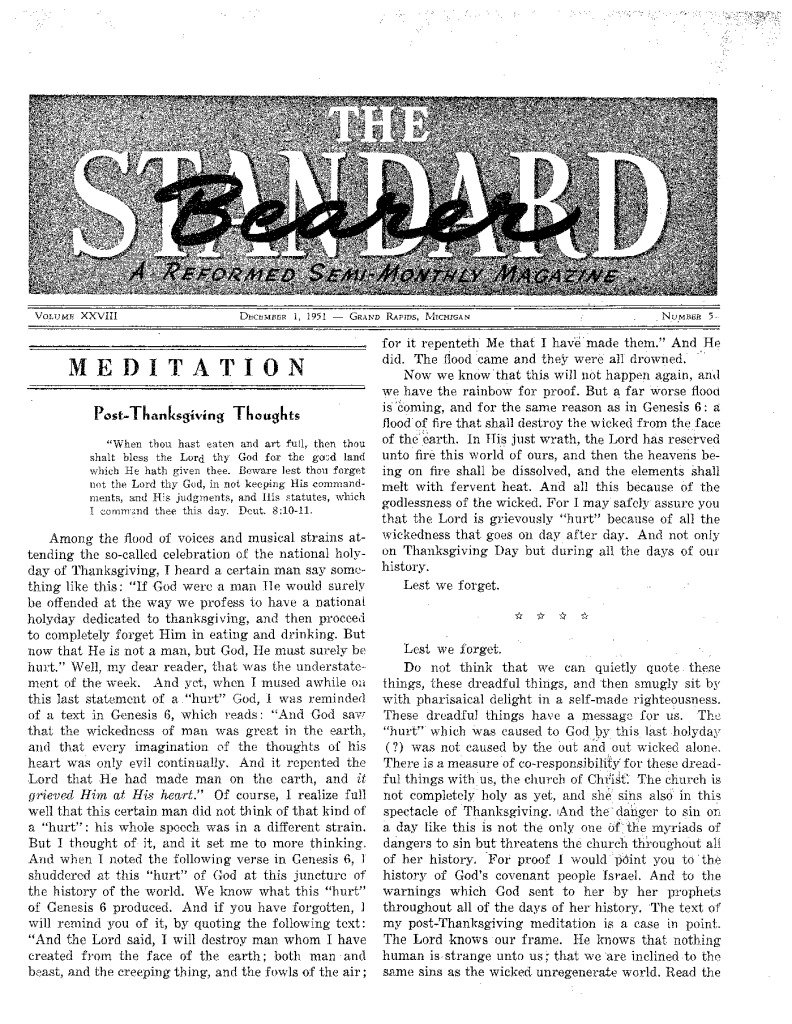