In these days of “Lent” is may be doing the care­ful reader a service by asking attention to the meaning of a portion of Isaiah 53.

There are some fundamental considerations to keep in mind when we try to interpret this beautiful pas­sage in which the suffering servant of the Lord is portrayed to us with such clarity that we see the very essence of the mystery of the cross.

The first consideration is, that Isaiah 53 is a part of the great promissory prophecies concerning the cer­tain and future redemption of Zion. Isaiah prophesies, to be sure, some one hundred and fifty years before the Babylonian captivity. Yet, with the eye of the Seer, he portrays the captivity as though it were al­ready accomplished history, as though the temple were destroyed, Jerusalem in ruins, and Israel in shame and enslavement. To that Zion, which is in bondage and crying for deliverance and the restoration of the Kingdom, Isaiah directs his prophetic word. And what is it? It is that Zion shall be redeemed through judgment and her converts through righteousness.

Let this not be misunderstood.

That Zion is to be redeemed from her bondage of Babylonian enslavement does not merely mean, that God will again rebuild the earthly Jerusalem to its former glory as in the days of Solomon. Far be it from this. Neither does this mean that God will again build the throne of David in earthly Jerusalem. This never again happened. The prophet sees Zion as she would stand according to the eternal good pleasure of God in glory, in the new and heavenly Jerusalem! Isaiah sees prophetically nothing less than the final resting place of God’s ark, when the tabernacle of God shall be with men.

This shall be realized through the death of the Son of God. His visage is marred more than any of the sons of men; yet, He shall deal prudently and rise, and be exalted, and be exceedingly great. And Isaiah 53 speaks not of the prophet himself but of another; it speaks of no one less than of the Son of God in our flesh, the great servant of Jehovah sent of the Father into this world.

Isaiah 53 is, therefore, not to be viewed or treated as some aphoristic passage, a piece of instruction all by itself, but it must be viewed as all the prophets saw it; that they looked for and searched out the sufferings to come upon Christ and the glory to follow. It is re­demption through suffering.

Such is the first consideration.

As for our second consideration, we must remark, that in studying Is. 53 it is of supreme importance that we do not view prophecy as history written in advance. There are those who thus view history. And, especial­ly in the last part of Isaiah 53, interpreters often give the impression, that they are controlled by the desire to read more historical stages of the suffering of Christ into the chapter, than the text actually permits. One receives the impression, that they would read the or­der of the steps of Christ’s state of humiliation and of His state of exaltation into the text. This may never be. Nor is this the purpose, the meaning of prophecy. The prophets saw from afar. They could not read history in detail. Enough is told us that when it does come to pass we may understand; meanwhile the church had to wait and expect with patience.

What we do have in Isaiah 53 is, that God portrays unto us the mystery of godliness in Calvary. Here we have pictured unto us the good pleasure, the heart of God. O, God’s ways are through the holy place; Zion is redeemed through judgment! God’s Son comes to stand in our stead and carries away our sins and transgressions. Behold, the servant of the Lord!

This too we are called upon to do in our study of the verses 8 and 9 of said Chapter.

We quote this passage from the King James Ver­sion as follows: “He was taken from prison and from judgment: and who shall declare his generation? for he was cut off out of the land of the living: for the transgression of my people was he stricken. And he made his grave with the wicked, and with the rich in his death; because he had done no violence, neither was any deceit in his mouth”.

Although it always is psychologically difficult to differ with an accepted translation, especially when writing for those who are not acquainted with the original language in which the Bible was written, yet we have very serious objections to this translation of the King James Version of the Bible here. Without going into too great detail of the science of interpreta­tion we must call attention to some serious objections to this translation.

Secondly, this unnatural sense of the text leads to and may be in part the result of exegetical fancy.

And not a few of the commentators see at this junc­ture of Isaiah 53 a new stage in the suffering of Christ, rather than another aspect of the same suffer­ing! In the foregoing, it is alleged, the prophet por­trays to us the man of sorrows, who is led as a lamb to the slaughter and who is dumb as a sheep before his shearers, not opening his mouth. But here, so it is affirmed, the prophecy takes a new turn. Here Christ is pictured not as the suffering servant, but as the servant who is snatched from death. It is asked in all candor, is that what the Holy Spirit would teach us here? Would then the prophet return in verse 10 to continue describing to us the man of sor­rows bruised by God’s good pleasure? We think not. And our reason is that the plain meaning of the ori­ginal is against this.

That the plain meaning of the text is against the translation is also demonstrated, to our mind, by the fact that on the basis of the King James Version you have almost as many interpretations, as far as the several details of the text is concerned, as you have interpreters. The reason is that once having departed from and/or failed to see the meaning of the text, the guess of one man is just as good as that of the other.

In our criticism of the text of the King James Version we are not alone.

In the American Version of the revised I read the following translation of verse 8: “By oppression and judgment he was taken away; and as for his genera­tion, who among them considered that he was cut off out of the land of the living for the transgressions of my people to whom the stroke was due?” And of verse 9 Calvin gives the following excellent translation: “He (God) laid upon to the wicked men his (Christ’s) grave, and to the rich man his death, though he did not violence (iniquity) neither was their guilt in his mouth”.

It does justice to the Hebrew mode of speech, to wit, Hebrew parallelism. In verse 9 the phrase “He laid to the wicked his grave and to rich his death” we have a very evident parallelism. The latter phrase more particularly explains the former. The subse­quent meaning of this in the actual interpretation we hope to show later.

It also does justice to the very evident definite accusative (eeth) in the text. We cannot here go into particulars. Those who understand Hebrew will be able to verify this. See Calvin’s Commentary a­mongst others.

So much for the translation of this passage.

When reading the text thus, it strikes us that the prophet does not give us here another stage in the suffering of Jesus, the passing from the state of humil­iation into the state of exaltation, but that we still have a description here of Christ in His suffering. It is true, always the suffering of Jesus is connected by the prophet with the exaltation of Christ, That is true in every passage of Isaiah 53. And may even be granted that in one passage this is stronger than in the other. But the fact remains, that Isaiah 53 shows us the Man of Sorrows throughout! And, therefore, also here we do not have a new stage in the suffering of Christ, nor a passing into the state of exaltation, but we have the same suffering of Christ shown to us in another light.

Pray, and what is this other light?

It is that here we see the mystery of suffering of Christ as it is I of God! The judgment of God strikes Christ and really casts Him out of the land of the living bringing Him down to death and Sheol.

That is the new viewpoint here.

Incidentally, in Isaiah 53 we do not deal with mere monotonous repitition. There is a very real and won­derful progression. The prophet does not portray externalities. He shows us (O, wonder!) the mystery of the cross, so that we may see the fullness of God’s love, and worship.

Each time we see the cross from a certain aspect we feel constrained to put on our beautiful garments and garlands of rejoicing in gladness.

Does not the prophet say: Awake, awake, put on thy strength, O Zion; put on thy beautiful garments,

O Jerusalem, the holy city; for henceforth there shall no more come into thee the uncircumcised and the un­clean. Shake thyself from the dust; arise and sit down, O Jerusalem; loose thyself from the bands of thy neck, o captive daughter of Zion. For, how beau­tiful upon the mountains are the feet of Him that bringeth good tidings; that publisheth peace; that bringeth good tidings of good, that publisheth salva­tion that saith unto Zion: Thy God reigneth!

Yes, He reigns in Calvary.

He is in this servant on the cross. God was in Christ reconciling the world unto Himself.

Hence, here is no repetition, but a new viewpoint each time of the wonder of the cross as to it essence and nature! 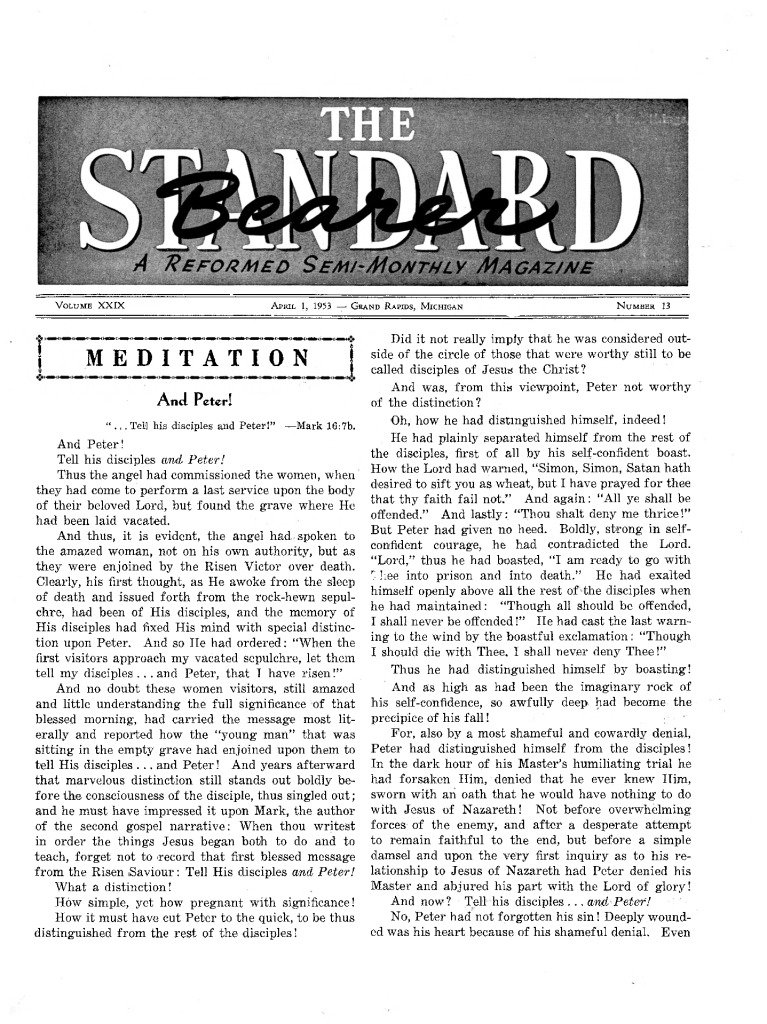