Twice we have now called attention to the exhortation of Paul given to Timothy here in the text in I Tim. 2:1-7.

In the first installment we called attention to the meaning and implication of the term “all men” as this is modified in the phrase “for kings and for all who are in authority.” It was and is our settled conviction that the meaning of “all men” as here employed by the Holy Ghost through Paul must not be distilled into “every man” in the sense in which the Arminians speak of this, to wit, “that Jesus Christ, the Savior of the world, died for all men and for every man, so that he has obtained for them all, by his death on the cross, redemption and the forgiveness of sins . . .” (Point II of the “Five Articles of the Remonstrants.”). It is and was equally our conviction and contention that the text does not afford proof for a certain attitude of grace or favor of God to mankind in general, or to all to whom the Gospel is preached. This in opposition to the Common Grace enthusiasts, the Synods of the Christian Reformed Church, past and present.

In our second installment we indicated what we believed to be the teaching of Scripture in general concerning the meaning of prayer, the chief part of thankfulness, so that in justice God is acknowledged to be who He is and what He is in the history of the gathering of the church, all men; and also how in truth He ought to be confessed and acknowledged to be God the Savior of “all men.” This we do when we pray. And, those who have read this second installment, will remember that we also called attention to Paul’s enumeration of certain forms of prayer, which terms indicate, when taken together, the full-orbed prayer of the church. They also show the urgency indicated in this exhortation to prayer for all men. Not one class of men, aged and young, rich or poor, slave or master, man or woman, king or subject, may be omitted from our prayers for their salvation, namely, their coming to the knowledge of the truth.

We now stand before another question which is indicated in the text. I refer to what Paul indicates as being the basis for this prayer for “all men.” We do well to consider this element in the text too and try to show its relation to the exhortation that prayers be made for all men.

What was this solid and only basis for such prayers?

It is: the will of God that “all men be saved and come to the knowledge of the truth.” God wills even to bring certain kings to the knowledge of the truth. It is the soteriological purpose of God, even with kings and all who are in authority, as they are included in all men which is the ground for the injunction that they too be the objects of our prayers. Certainly when kings are truly pious God’s people lead quiet and peaceful lives, undisturbed by violence and persecution in the world!

Let it not be overlooked that God is here denominated “God, our Savior.” This is an indication that we have here to deal with God not simply as the Creator of the world as such, apart from the cross, resurrection of Christ, and the final restoration of all things in the Parousia of Christ. This is not a certain saviorhood of the creature; a certain providential care over the creature in general which would then form the substrate for God’s dealing in Christ. The doctrine of the providence of God is not an article of faith common to believer and to unbeliever. It is no Articulus mixtus! When we believe in “God the Father almighty, maker of heaven and earth” we believe in God the Father as his sons of adoption for Christ’s sake, who are foreordained from before the foundation of the world unto such sonship, confession and prayers. See Lord’s Day 10, Questions 27, 28. And in that very peculiar and unique sense of the term Paul here speaks of God, the Savior.

That such is the meaning of the term in Scripture is abundantly proven by many texts, which beyond a shadow of a doubt refer to God as the Savior in Christ, as He saves His people from their sins. We refer to the Song of Mary as found in Luke 1:47: “And my spirit hath rejoiced in God my Savior.” It is very evident from this song of Mary that she here refers to Jehovah God, the God of Abraham, Isaac and Jacob; it is of the covenant God, as merciful to his people of whom she sings, and not simply of a preserver of creation, preserving the substrate to maintain and execute the common mandate to man that he be fruitful and replenish the earth! God, the Savior, is definitely the God who through the blood saves His people from sin, and the whole creation for their sakes. Rom. 8:21. That such is the case is clear from what we read in Jude 24, 25: “Now unto him that is able to keep you from falling, and to preserve you faultless before the presence of his glory with exceeding joy, to the only wise God, our Savior, be glory and majesty, dominion and power, both now and forever, Amen.” Also here “Savior” is in the Christological, soteriological and truly eschatological sense; all things reunited in Christ Jesus!

This is corroborated by the current usage of the term here in the epistle to Timothy. Do we not read in I Tim. 1:1 that Paul is an apostle of Jesus Christ by the commandment of God our Savior, and the Lord Jesus Christ which is our hope? And do we not read again of God as Savior in I Tim. 4:10 of the “living God, who is theSavior of all men, specially of those who believe”? And is this same God not called Savior in Titus 3:4-6 where we read: “But after that the kindness and love of God our Savior toward man appeared, not by works of righteousness which we have done, but according to his mercy he saved us, by the washing of regeneration, and renewing of the Holy Ghost, which he shed abundantly on us through Jesus Christ our Savior, that being justified by his grace, we should be made heirs according to the hope of eternal life.â€쳌

We believe that our interpretation of “God our Savior” stands confirmed from Scripture itself.

Since the will of God is, in this great plan of salvation, that all men be saved, the entire human race, that is, the elect out of every tongue and tribe and people and nation, it is also the will of God that prayers be made for “all men.” For for all of these elect was the blood of Christ shed, a testimony in God’s own time.

It is further emphatically stated that there is but oneGod and one Mediator of God. This is very meaningful for the exhortation that prayers be made for all. It is exactly the truth that there is but one God and Savior, and one Mediator of God and men which is the basis for the unity of the church, and for the fact that all men, all kinds of men, elect to everlasting life, be brought before the face of this one God in prayer.

Heathendom is necessarily polytheistic, that is, it must have more than one God. Having fallen away from the one true God they serve the creature, and they have as many gods as there are individual creatures. Heathendom cannot come to unity. It is only when the entire cosmos is brought back again to God through the blood of the Mediator Jesus Christ, that again there can be a service of one God. That unity is in the many members which are constituted one body in Christ.

And so the basis for the unity of the prayers of all saints for the entire Christ, for every class of men is not in a common, imaginary brotherhood of man, but it is in the unity which is ours in the one new man in Christ wherein is neither Jew nor Greek, bond nor free, male nor female, but where all are one in Christ by faith.

And it is for this reason that this one God and one Mediator is made the basis for the exhortation unto prayers for all men.

There cannot be any other basis.

It is in the incarnated Son, the Word of God whichdwelt amongst us, Who suffered and died that the middle-wall of partition was broken down, and that one new man is created, that peace is proclaimed to those who are far and to those who are near.

This Son of God in the flesh has come in His own time. He died at the proper time in history. He reconciled all things again unto God through His blood on the cross, and He has the preeminence in all things.

He also called Paul unto the proclamation of the gospel. And Paul preaches the Gospel everywhere. He must teach the Gentiles in faith and verity. As an ordained preacher Paul preaches and teaches. He is an apostle of Christ by the command of God the Savior and the Lord Jesus Christ. And in this unity of the word of the one God Paul is busy.

Wherefore let every one know that prayers are within the framework of the economy of salvation in Christ as wrought by the Savior God in Him. And prayers are in agreement with the calling of Paul to be an apostle and a teacher of the Gentiles in verity and truth.

Here one prays that God’s kingdom come, namely, “so govern us by Thy Word and Spirit, that we submit ourselves to Thee always more and more; preserve and increase Thy church; destroy the works of the devil, every power that exalteth itself against Thee, and all wicked devices formed against Thy Word, until the fullness of Thy Kingdom come, wherein Thou shalt be all in all.” Lord’s Day 48, Question 123 of the Heidelberg Catechism.

When thus the prayer of all saints is prayed, all is well.

Small wonder that Paul says: I exhort therefore, that, first of all, supplications, prayers, intercessions, and giving of thanks be made for all men!

This is a chief point of God’s agendum of salvation.

It is good and acceptable before Him.

It is the sweet incense of the prayers according to His will. 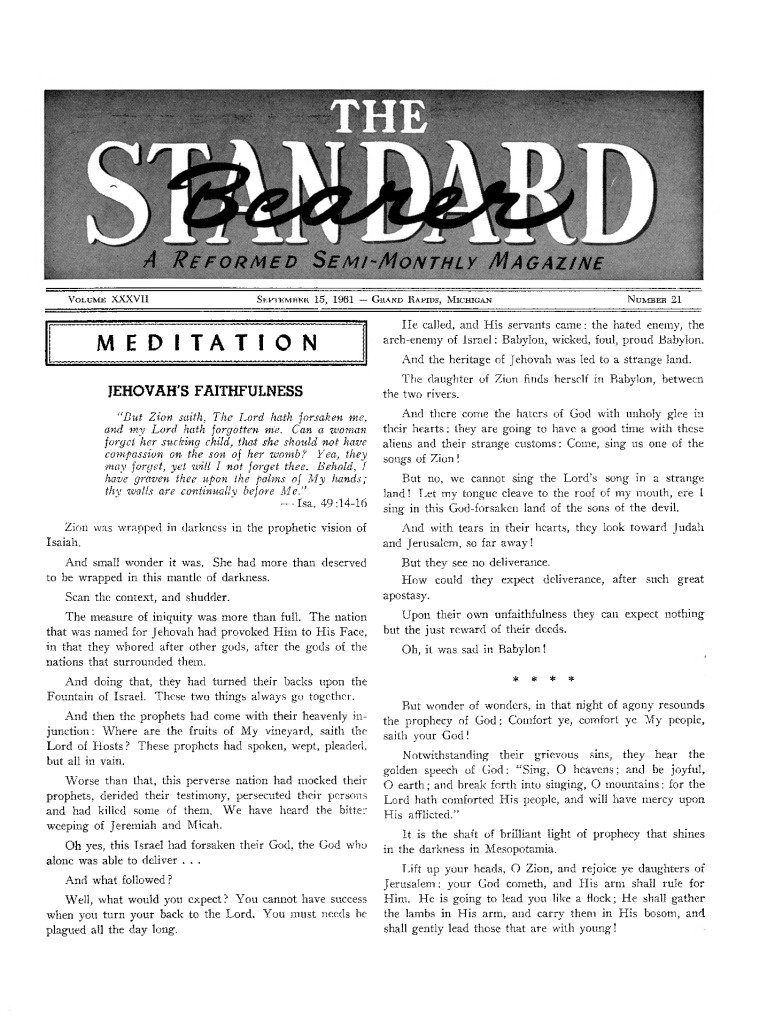